You don’t want to miss out this price analytics.

The views and opinions expressed here are solely those of authors/contributors and do not necessarily reflect the views of Cointelegraph.com. Every investment and trading move is risky, you should conduct your own research when making a decision.

Bitcoin is on the cusp of mass adoption, with futures trading starting on the CBOE from 6 p.m. ET on Sunday and on the CME from December 18. After the buying frenzy of the past few days, the question in everybody's mind is whether the trading in futures will boost prices higher or will the short sellers use the opportunity to sink prices lower.

This is an unprecedented event; hence, it is very difficult to forecast the final outcome. Nevertheless, the volatility is likely to remain high in the first few hours and days of futures trading, as both the bulls and the bears slug it out at the CBOE.

While the intraday traders can use the opportunity to profit from the volatility, it will be a difficult time for the investors.

Additionally, how will the trading in Bitcoin affect the altcoins? Will it be bullish or will bitcoin garner all the attention?

We will get the answers next week. Until I get a clear picture, I will not recommend any trading positions at the moment.

The momentum in Bitcoin pierced through the critical Fibonacci resistance levels. It hit a high of $17237.44, well above the levels where I had advocated booking profits in my previous analysis. After three large range days, the digital currency is forming an inside day candlestick pattern. I believe that the first few hours of futures trading are likely to be very volatile. It is difficult to predict, which way will the prices move.

We can only keep certain levels in mind and work with them once the volatility subsides.

These levels are only guidelines. Tomorrow, Bitcoin can easily breakout or breakdown of these, hence, please trade with caution. I recommend staying on the sidelines for the next couple of days, unless one is an experienced intraday trader.

Ethereum has been consolidating between $390 and $480 since breaking out of the ascending triangle pattern.

For the second time, $390 acted as a strong support level on December 07. As the bears are unable to sink the digital currency below $390, the bulls will attempt a breakout above $480. If successful, Ethereum is likely to quickly rally towards its pattern target of $652.

On the other hand, if the bears sink the cryptocurrency below the support levels of $390, the bullish view and the higher pattern targets will be invalidated. Therefore, traders can keep their stop-loss marginally lower than $390.

Yesterday, Bitcoin Cash dipped below our stop loss levels; so I shall consider the position as closed. However, the dip proved to be temporary, as prices again recovered quickly. Bitcoin Cash has become range-bound between $1129.33 on the lower end and $1758.4 on the upper end. At the current levels, it is right in the middle of the range.

I suggest buying on a breakout above $1760 levels or waiting for a dip towards $1129 for initiating any fresh positions.

The fall on December 06, broke below my stop loss of $0.218. However, Ripple found support at $0.20 levels and has bounced back sharply once again. 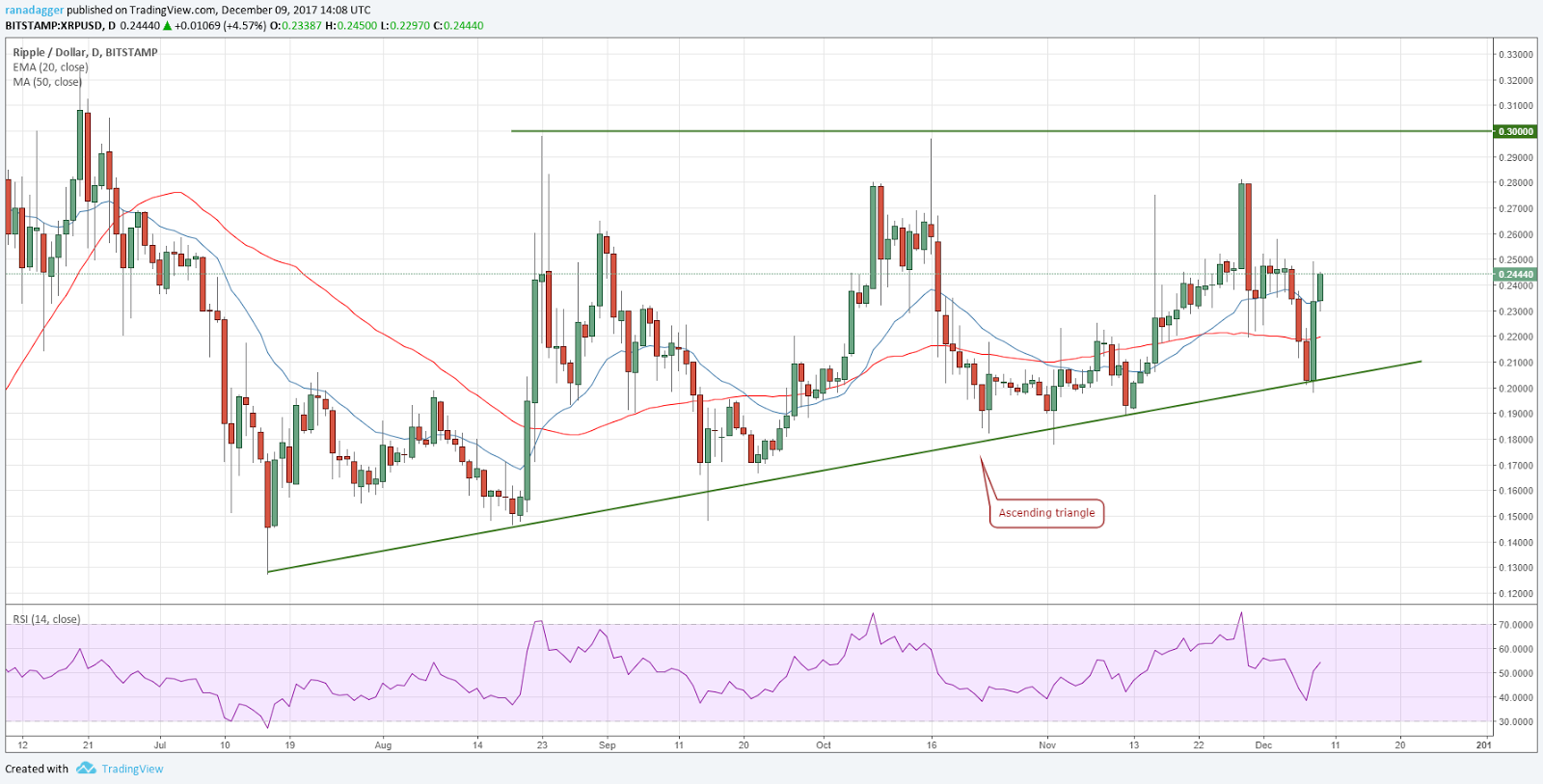 The virtual currency has formed a large ascending triangle pattern, which will complete on a breakout of $0.3.  On the downside, the trendline of the triangle is likely to act as a strong support.

Ripple will become negative only on a fall below the trendline. Until then, a rally to $0.30 is on the cards.

Due to the volatility inside the triangle, the best place to buy is near the trendline support or on a breakout above the overhead resistance.

Litecoin fell towards the 20-day EMA, just as I expected. From there, strong buying propelled it to new highs. The breakout of the channel had a pattern target of $154, and Litecoin reached a high of $157.36. As the price has reached its target objective, partial profits can be booked at the current levels.

I anticipate a couple of days of consolidation after which the bulls will attempt to resume the uptrend once again.  The next target on the upside can be extrapolated only after the consolidation.

Dash fell to the 20-day EMA yesterday, where buying emerged, pushing it back into the ascending channel. 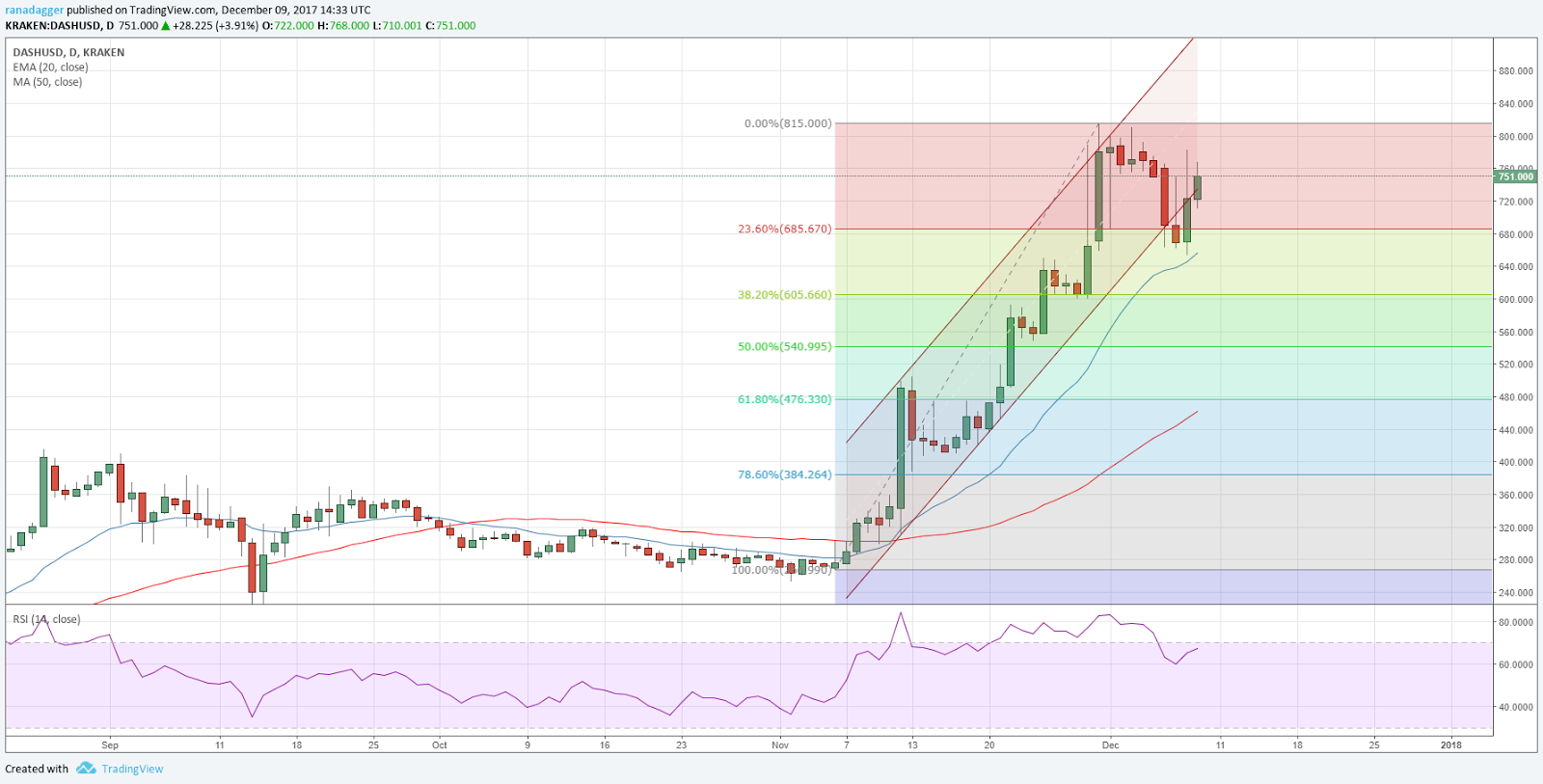 I expect the digital currency to retest the highs at $815 once again. If the bulls manage to breakout of this overhead resistance, we might see a rally towards the resistance line of the ascending channel.

Dash will become negative only on a fall below $640 levels.