Crypto community wonders why Nakamoto Telegram channel enters read-only mode – could this be due to spam and trolls or something else.

According to the about section of the Nakamoto website, the platform was launched “to create a venue for quality technical, philosophical, and cultural writing that is of general interest to the crypto community as a whole, for beginners and experts alike.”

The news site also mentions that “all Nakamoto contributors share one non-negotiable value: they must be pro-Bitcoin (BTC) for the long-term.”

While this may be the case, many Nakamoto contributors are leading communities rivaling Bitcoin. For example, Michael Arrington, co-founder of Arrington XRP Capital, is a writer on the platform. On Jan. 3 Arrington published his first piece on Nakamoto entitled, “It Will Take Years For Smart People To Understand Cryptocurrencies.”

Bitcoin Cash proponent, Roger Ver, is another contributor to the site, along with Ethereum co-founder, Vitalik Buterin. The contributor list has created controversy in the crypto space, as the group makes it clear that all writers must be pro-Bitcoin, yet many of them are leading other initiatives.

In addition to a contributor network that seems to go against the news sites’ values, Nakamoto’s Telegram account, which was created for the crypto community to share their thoughts regarding the platform’s content, has gone into “read-only mode.”

According to a pinned message in the Nakamoto Telegram Channel, read-only mode occurred as a result of “trolls and spambots” and that Telegram’s moderation tools are “only so-so and have many false positives.” 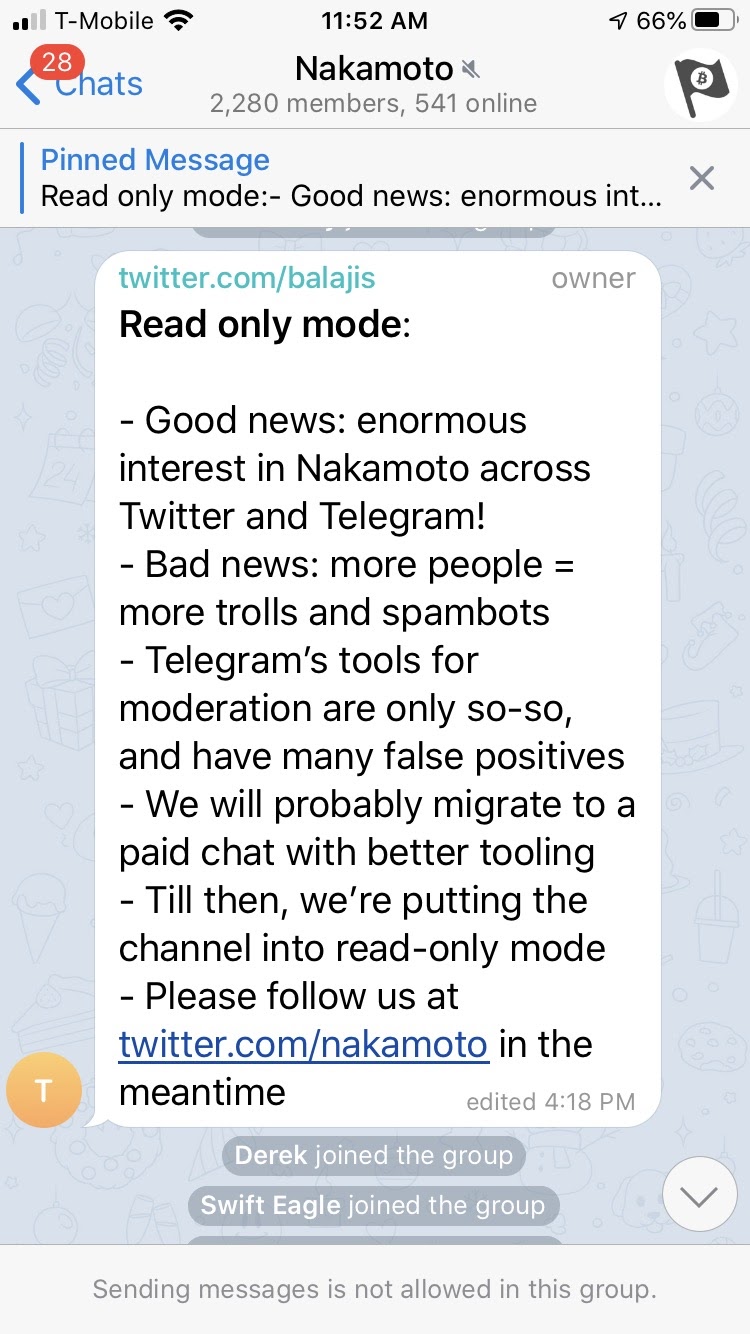 Ironically, Nakamoto’s Telegram group, which currently has over 2,240 members, is moderated by Vitalik Buterin, Zooko Wilcox of the Electric Coin Company and Hudson Jameson, who is the community manager at the Ethereum Foundation. Each of these members supports non-Bitcoin related projects — which wouldn’t necessarily be a problem, but has led to some suspicion that they will use that forum as a platform for non-BTC coins.

A Cointelegraph reporter introduced himself to the group on Jan. 5 simply by saying: “Hi I’m pro BTC”. Seconds later, he got a message saying the group is no longer accessible.

Is read-only mode a result of trolls and spambots?

While the Nakamoto Telegram channel claims in its pinned message that read-only mode is a reaction to trolls and spambots, the controversy surrounding the new site’s’ Telegram group has the crypto community speculating.

Nakamoto website contributor Michael Arrington told Cointelegraph on Twitter that read-only mode is due to the group’s fast growth. He explained:

“I believe @balajis said that it grew so fast that the trolls had taken up residence, so they put it on read only until they find a better solution.”

@balajis is the Twitter handle for former Coinbase CTO, Balaji Srinivasan, who apparently is the owner of the Telegram group chat.

Arrington replied to Cointelegraph seconds later that he actually can’t discuss the real reason why read only mode is on the telegram channel: 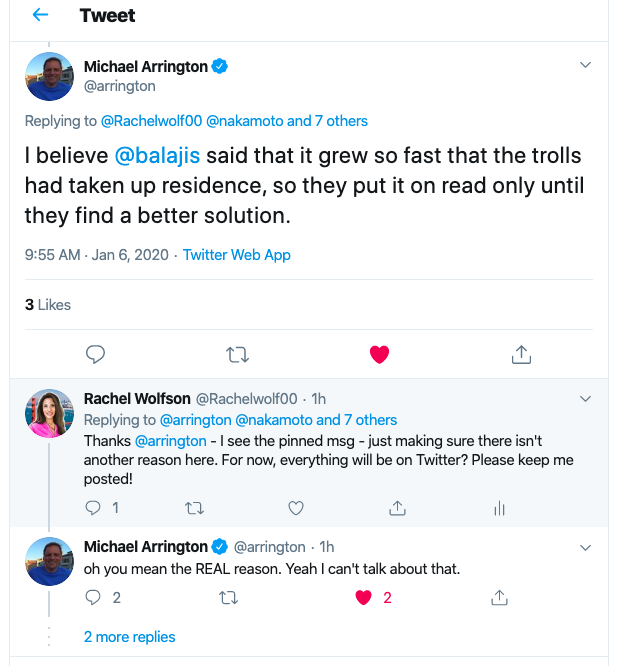