Report: Blockchain Deployment Could Add $3 Trillion in International Trade by 2030

A new study from the WTO has analyzed the potential and possible impact of blockchain technology on international trade.

The World Trade Organization (WTO) released a report on blockchain technology’s effect on international trade today, Nov. 27. Per the study, blockchain’s economic value-add on a global scale could reach almost $3 trillion by 2030.

“Blockchain and International Trade: Opportunities, Challenges, and Implications for International Trade Cooperation” analyzes blockchain applications and challenges that must be considered before the technology’s deployment in various sectors. The study considers the technology’s effect on industries such as trade finance, customs clearance, logistics and transportation. 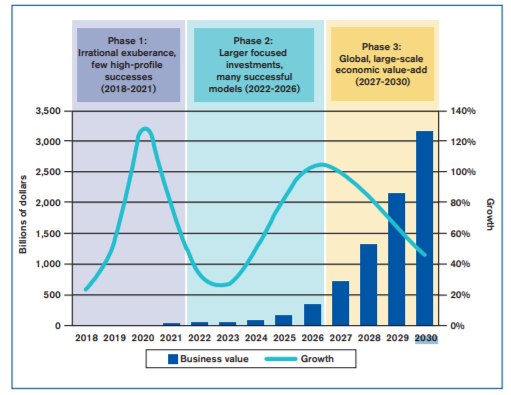 The study estimates that blockchain has the potential to significantly cut trade costs by increasing transparency and facilitating processes automation, including financial intermediation, exchange rate costs, coordination, and other aspects. “The removal of barriers due to blockchain could result in more than $ 1 trillion of new trade in the next decade,” the report reads.

Blockchain purportedly could improve supply chains, allowing for the tracking of shipments and proving their authenticity. Additionally, the technology could open new opportunities to micro, small and medium-sized companies.

Conversely, the study warns about challenges that must be addressed before deploying blockchain, as well as its impact on international trade. The researchers point out limited scalability of blockchains due to the predetermined size of blocks, in addition to energy consumption and security issues.

Although “blockchains are highly resilient compared to traditional databases due to their decentralized and distributed nature and the use of cryptographic techniques, they are not completely immune from traditional security challenges,” the study states.

The report stresses the importance of developing a multi-stakeholder approach in order to find appropriate use cases in cross-border trade. According to the WTO, blockchain requires frameworks that ensure the interoperability of networks and provide clear legal status for blockchain transactions across jurisdictions. The report concludes:

Earlier this week, Ethereum cofounder Vitalik Buterin said that the misapplication of blockchain technology in some industries leads to “wasted time.” Buterin argued that although there are a number of companies that try to establish higher standards by using blockchain technology, he does not think the technology is applicable in every industry.