A start-up says a real-time inventory of the world’s 27 mln shipping containers could save industry $5.7 bln a year and cut CO2 emissions.

A company claims one in five shipping containers are unaccounted for at any given time. Its Blockchain-based inventory aims to change that 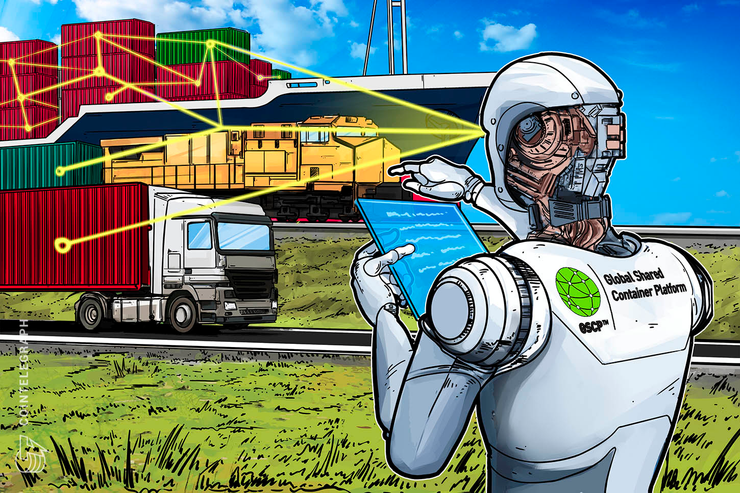 A start-up led by seasoned professionals in the shipping industry is creating a Blockchain-driven platform which, for the first time, will provide a real-time registry of the world’s 27 million containers.

Blockshipping says its solution – which is called the Global Shared Container Platform (GSCP for short) – has what it takes to address staggering inefficiencies in the marketplace, bringing significant savings for businesses throughout the supply chain and dramatically reducing the industry’s toll on the environment.

Despite being a “hugely valuable” sector, Blockshipping says the industry has been plagued for years by security threats, overcapacity and ever-tightening environmental policies – adding that some issues have gone unresolved for decades.

Within a three to four-year period, the Scandinavian company aspires to have 60 percent market coverage – equating to 16 million shipping containers – and hopes its utility token will become the standard currency for transactions between firms operating in the industry.

Blockshipping believes firms will be incentivized to adopt its technology by estimates which suggest the industry could enjoy annual savings of $5.7 billion if the Global Shared Container Platform goes mainstream.

This would be achieved through the “smarter handling” that the GSCP would enable – making it easier for deficit and surplus containers to be matched. Blockshipping’s white paper cites research which indicates that carriers could reduce the size of their container fleets by up to 20 percent by installing real-time tracking sensors and gaining accurate location data.

The company also claims that, at any given time, one in five containers worldwide (the equivalent of 5 mln units) is unaccounted for. To compound the problem, it can be difficult to gather information about whether containers are empty or loaded, meaning that, all too frequently, trains and trucks are wasting time and fuel transporting empty metal boxes.

Needless to say, this means that the environmental advantages of the GSCP could prove quite significant. According to analysis from Opsiana, a consultancy also based in Scandinavia, the platform could see global carbon dioxide (CO2) emissions fall by 4.6 million tons per annum – with nitrogen oxide (NOx) emission cut by 4,900 tons.

In the weeks to come Blockshipping expects to announce 3-4 collaboration agreements with different technology partners who will assist Blockshipping in developing the GSCP platform.

Rune Christensen, CEO of MakerDAO, sees a lot of possible benefits to Blockshipping by using the Dai Stability System to power the GSCP platform. In a joint press release he says:

“We look forward to a partnership with Blockshipping in developing the best possible solution for transforming the container shipping space, where the Blockshipping solutions on the longer term can be “powered by Dai.” We are eager to show that our stablecoin system is perfectly designed for supply chain projects like Blockshipping’s GSCP platform.”

Blockshipping says that its first customers will be able to start using the portal from the first quarter of 2019. This year, the platform is being designed and populated with data, paving the way for smart contracts to be developed and testing to take place.

The company is going to be offering two types of tokens. The first, known as the container platform token (CPT,) would be pegged to the US dollar and used for clearing and settling transactions. Meanwhile, the container crypto coin (CCC) is going to be issued on the global Ethereum Blockchain for its initial coin offering. Examples of when CPT would be used include fees associated with the land transport of containers, and costs linked to repairing and servicing units.

Blockshipping says its GSCP platform has been initially funded by the Danish Maritime Foundation as well as private angels, but an ICO is being performed to “further accelerate the development and adoption” of the ecosystem.

The company’s chief executive, Peter Ludvigsen, told Cointelegraph: “Traditionally, the shipping industry has a reputation for being rather conservative, but what I have experienced since the announcement of our GSCP project is anything but the traditional pushback on new business ideas. It has been like one unbroken series of positive dialogues with key players of all areas in the container shipping industry.

Blockshipping’s public sale will be commencing on May 14.