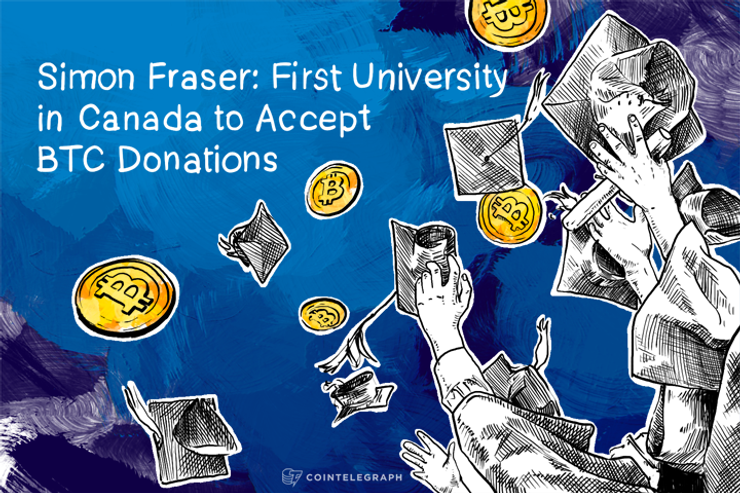 The 49-year-old university has an enrollment of more than 30,000 students.

Their donation will go to SFU students Laurie Macpherson and Lauren Shandley, who are working on a humanitarian co-op project in Kolkata, India. According to the university’s statement, the two will spend the fall working with a project that seeks to empower girls who are victims of human trafficking or who are vulnerable to the crime.

“I would emphasize that the school is pushing these two students to spread the word about bitcoin in india, where 40% of their population are unbanked and where Bitcoin is booming because it is a potential path towards economic prosperity,” Yeung said. “Also, the school is looking to establish a closed-looped Bitcoin ecosystem on campus. Taking Bitcoin donations is simply a first step.”

The closed-loop ecosystem Yeung referred to was first reported by Vancouver’s Straight.com on August 20. The article quotes SFU’s executive director of ancillary services, Mark McLaughlin, as saying the university was conducting a feasibility study to determine whether Bitcoin payments could be made available through the university’s dining services or at the university bookstore.

CoinDesk’s Pete Rizzo reports that BitPay will be the university’s payment processor.

"The Straight reports that the university's Bitcoin club has reached membership of at least 175. What do you think is driving interest among SFU students in Bitcoin? In general, how excited are people — students, faculty, administrators — about Bitcoin on campus?" - CT

"The faculty and administrators I run into range from being fairly neutral (e.g. this has no risk other than reputation, or, not seeing any reason to not accept bitcoin) to being very excited (seeing this as the dawn of a new era and being able to attract a lot of good attention and extra traffic). The students and those who are not from SFU but attend our eventsare very supportive; many are shocked that our school would be so forward thinking, so cool if you will, and will definitely test out the ATMs and buy a few things from the bookstores and dining services once we're ready."