Bitcoin’s dominance rate dropped to a 14-month low before last week’s double-digit correction, possibly a sign that the market was overheating.

Last week's Bitcoin (BTC) 11.4% drop might have seemed unexpected or entirely out of the norm. The truth is, the lack of a more substantial correction since the 50% drop that occurred on March 12 was the unusual part.

Some analysts and investors have said that the current DeFi boom was an unmistakable sign of excessive optimism, as some newly launched tokens quickly reached $1 billion market capitalization.

Yet, unlike the 2017 ICO frenzy where most projects weren't even able to launch their mainnet, most current DeFi tokens already have a working product.

Regardless of each project's strengths and weaknesses, it's important to focus on broader market indicators to seek predictive signs of a potential crash.

Bitcoin's realized volatility measures how large daily price fluctuations are, and a higher volatility indicates that the price can drastically change over time in either direction.

This indicator might sound counterintuitive, but lower volatility periods represent a more significant risk of explosive moves. This is partially due to realized volatility being a backward-looking indicator. During quieter periods, traders tend to over-leverage, causing larger liquidations during sudden price moves. 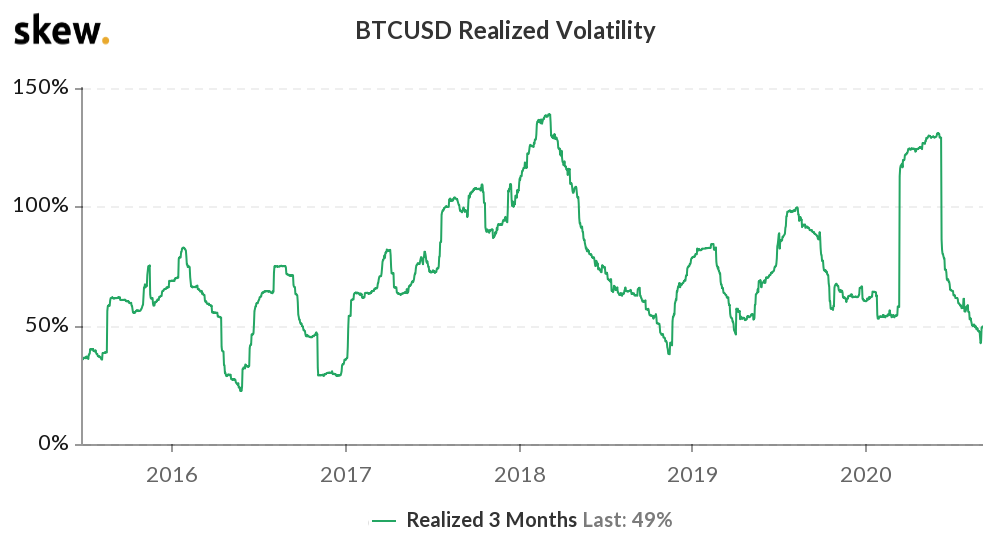 Skew data shows that Bitcoin's 90-day volatility was 42% on September 1, near its lowest levels since 2017. By itself, a quiet volatility period is not an indicator of an upcoming dump.

Volatility does not differentiate bull and bear markets, as it exclusively gauges absolute daily oscillations. One should then focus on recent Bitcoin performance to understand current market behavior.

Regardless of the market being analyzed, even 1,900% bull runs, such as the one Bitcoin pulled off in 2017, had weeks facing 5% or larger drops. There were 13 of those negative weeks during that incredible year, some early as March 5.

Before last week's 11.4% downturn, Bitcoin was up 146% since March 11. Below are the top and bottom eight weeks during such a period.

Notice how there hasn't been a single week of 5% or more downturn. That's unprecedented in Bitcoin history. This move clearly could be marked as unusual and was probably a telling sign of irrational exuberance.

Bitcoin dominance dropped to its lowest level in 14 months

As an absolute figure, BTC dominance usually doesn't mean much. Some critics dislike the indicator as it weights every altcoin the same regardless of its volume. There have been bull markets during moments of BTC's dominance decreasing, whereas sometimes a rally led the Bitcoin price to move higher.

As per the above chart, BTC dominance dropped from 69% to 59% in less than four months. The last time Bitcoin lost so much ground to altcoins was April 2018, a full two years earlier.

Take notice how the absolute 59% level could not be deemed something out of the ordinary. Despite being its lowest level in 14 months, the indicator held below 60% for most of 2018 and mid-2019.

Bitcoin put-call ratio near its top

Options markets are divided into two different markets. Firstly, call (buy) options allow its buyer to buy BTC for a fixed price later. Those derivatives can either be used on neutral or bullish strategies.

On the other hand, put (sell) options provide its buyer the ability to sell BTC for a fixed price, regardless of future market moves. This instrument is often used for protection strategies, signaling either neutral or bearish sentiment. 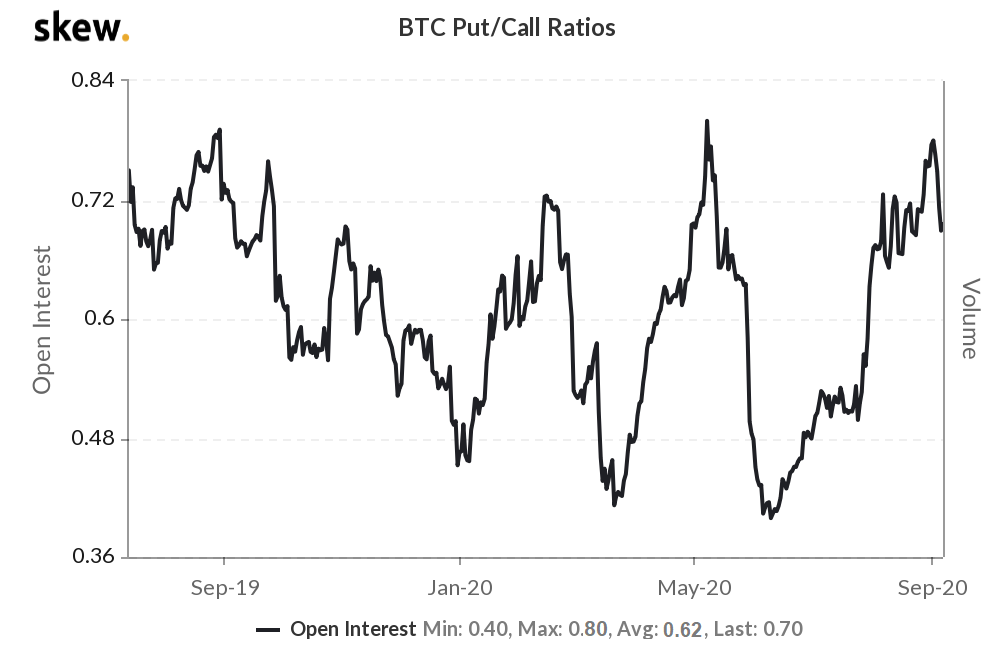 The put-call indicator will shift higher when more put options are being used, indicating bearishness. The above chart shows put (sell) options open interest near its highest level against call (buy) options.

The 78% ratio seen on Sept.1 means put (sell) options open interest was 22% shy to call (buy) options. Although far from bearish terrain, the put/call indicator was nearing its highest peak levels in 12 months.

Peaks are not indicative of new all-time highs

Take notice how both realized volatility and BTC dominance hit their 1-year low ahead of the 11.4% downturn. These indicators’ absolute numbers weren't bearish by themselves, so investors should take pains to compare them to historical data.

Calling a local top is hard, but when multiple indicators reach 1-year highs and lows, one should be prepared for significant volatility.

The options put-call ratio is another example of an absolute figure sitting at a neutral or bullish position, although it was indeed alarming. As the put/call ratio neared its 1-year peak, investors should have interpreted it as a bearish signal.