A popular vendor that sells gift cards for cryptocurrencies dropped altcoin support, in part due to the negative reaction he received from the community. 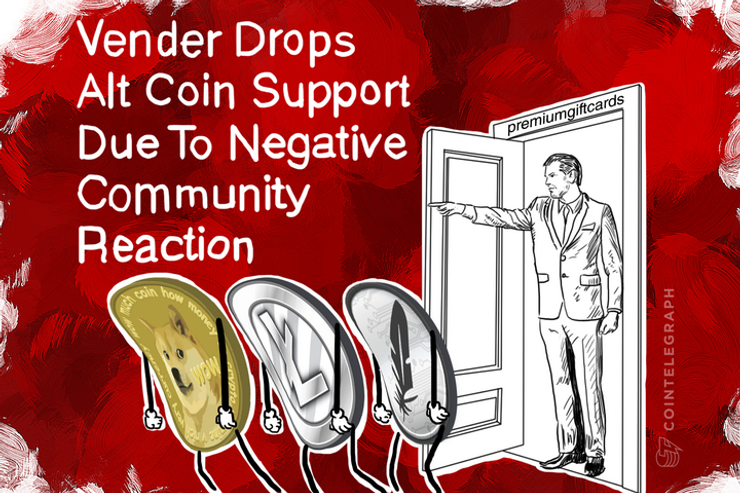 A few negative emails including one that called the vender a “traitor” to the Bitcoin community, along with a bad merchant experience and low number of sales caused a fairly popular Bitcoin for gift card / Steam loader service called Premium Gift Cards to drop its Altcoin support.

Premium Gift Cards focuses on gaming credits and cards not available on Gyft or eGifter. It also has Hulu and Spotify accounts and plans to eventually add Amazon Prime and a few other major cards. Most of the cards come at a small premium (around $1) but occasionally they fall below their retail price.

In an email announcing the site's relaunch, the owner Adam Brown, explained the reasoning for dropping support

“I have gone back to just accepting Bitcoin. I only had a few customers use Alt-coins and the animosity I got from Bitcoin purists made it not worth the effort.”

The owner of the site tells me that he received two such emails and no emails thanking him for altcoin support. He subscribes to the thought that for every one person who emails him, ten more feel similar. This, combined an unfavorable experience with CoinPayments.net that resulted in the loss of hundreds of dollars in loss because CoinPayments would refund the money if it took too long for six confirmations to go through.

He found Coinbase's experience with just bitcoins to be much faster but ultimately decided against using off blockchain transactions and built his own payment system using a few different APIs. He also said that returning to Altcoins at any point is unlikely, since most altcoin users can easily change their coins for bitcoins anyway, he thinks it is better for merchants to stick with the “gold standard” that is Bitcoin.

Some of the coins previously accepted at Premium Gift Cards include Dogecoin, Litecoin, Feathercoin and Peercoin. This chart from Cryptocoincharts.com and it shows some the volality Brown experienced while accepting altcoins. It shows Feathercoin's exchange rate for the past three months on Bter.com. In addition to a general downtrend, you can see various spikes, which makes pricing any product very difficult.

While there is a known division between some who are believers in altcoins and those who think Bitcoin is the only viable digital currency, it is interesting to see that go far enough that it influenced a merchant's mostly economic decision.