Where, Oh Where Has Bitcoin Volatility Gone? Part 1

While Bitcoin’s volatility has remained high relative to historical averages, it has only decreased since its peak in mid-March.

The first half of 2020 has been wild for just about everyone in every asset class. In early March, when it became evident that COVID-19 was a seismic event, asset markets across the globe crashed. One important reason was that levered investors suddenly received margin calls and were forced to liquidate assets to satisfy them.

When the only thing anybody cares about is cash, there is no such thing as a safe asset or a defensive investment. During the crash, companies rushed to access their revolving credit lines, bolstering cash reserves as quickly as possible in fear that if they didn’t do it today, that credit would be unavailable tomorrow. The bid for risk securities dropped out, and prices started to plummet. Bitcoin (BTC) and other cryptocurrencies were no different than stocks — simply another asset investors were holding that they needed to sell in order to raise United States dollars.

Only after the U.S. Federal Reserve poured massive amounts of cash into the banking system did the cash hoarding subside, and shortly thereafter, everyone rushed to put their cash back to work in the financial markets. Crypto markets stabilized and rebounded along with stocks. During this time, both BTC and stocks were experiencing extreme volatility, and this uncertainty was priced into the options markets for both.

As markets slowly began to show strength, implied volatility as measured through option prices started to settle as well. One-month annualized forward-looking implied volatility got as high as 80% in the S&P 500 stock index, peaking as high as 180% in BTC at the height of the panic, on March 16. Over the next few weeks, volatility tracked lower and lower, though remained high relative to historical averages.

After the craziness at the end of March and beginning of April subsided, traders turned their eyes toward the next thing on the horizon. For BTC, the next big thing was the upcoming halving of mining rewards. There was plenty of speculation on all sides about what would happen when the clock ticked past the fateful hour on May 11. Would prices skyrocket? Crash? Would nothing happen at all? Was it all priced in?

No matter which side of the debate investors fell, they could all agree on one thing — the halving might constitute a catalyst for a market move, and it might be worth owning some downside protection or upside exposure to take advantage of it. The fact that this potential event was on the horizon kept option-implied volatility from dropping too quickly, even as realized volatility started to settle down. Essentially, the market seemed to agree that options should have some extra value for the uncertainty of the halving event. Toward the end of April, despite realized volatility settling in the 65%–70% range, implied forward-looking volatility started ticking up as demand for options increased, reaching as high as 95% immediately before the halving. 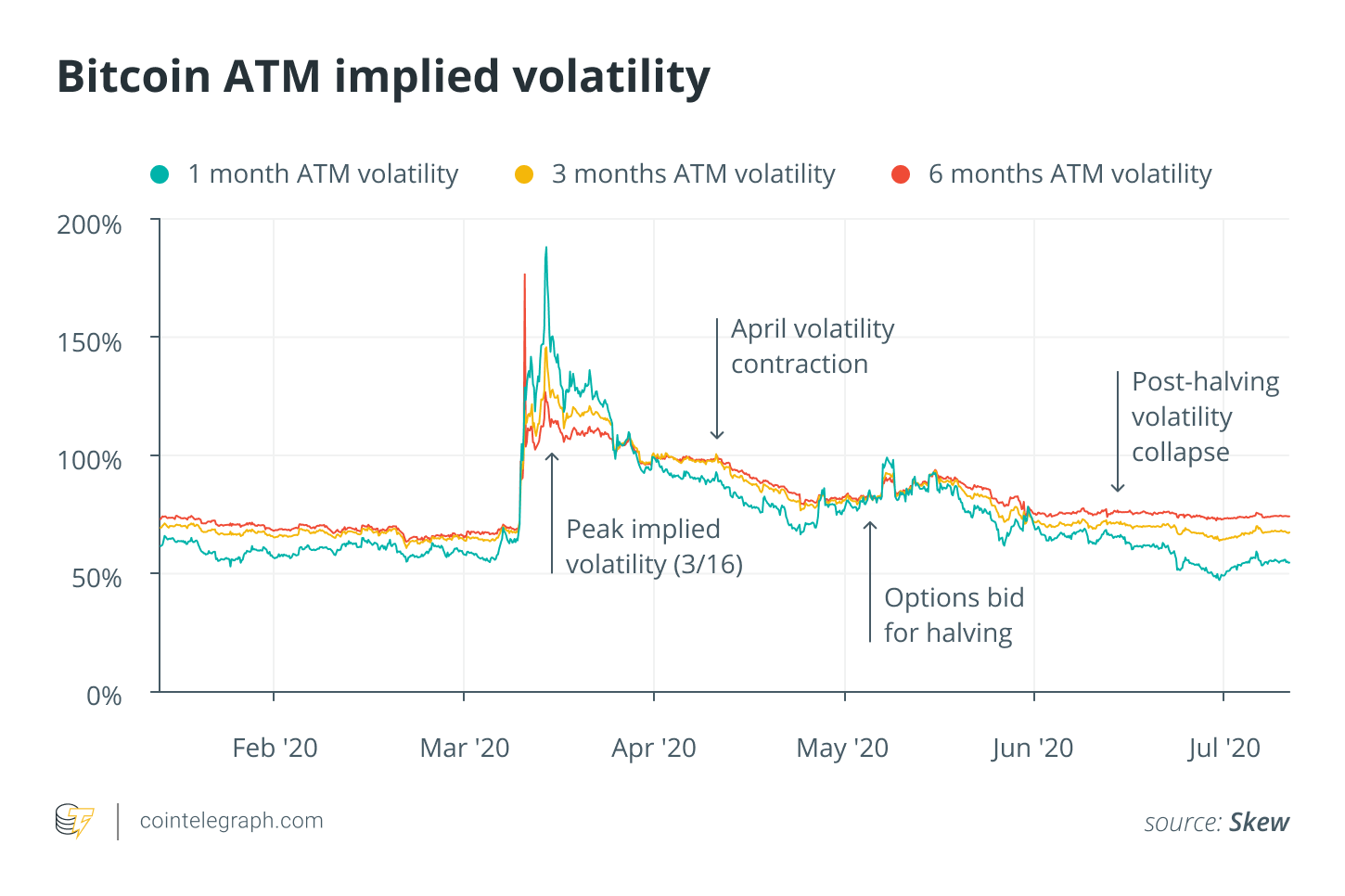 After the halving passed, and proved to be anticlimactic, there was much less of a reason for investors to own options, particularly the shorter dated expiries. The holders of long calls and puts started to close their positions, selling those options to market-makers, and even more of those holders decided to take short positions. As the market-makers started to get longer options in near term expirations, implied volatility was pushed aggressively lower.

At the same time, the market-makers were hedging their books as best they could. One of the most common hedging strategies in this scenario is gamma hedging. When a position is long options (whether they are calls or puts, as market-makers can easily hedge the first order sensitivity to underlying price), and especially with nearer-dated options, the position has positive gamma or positive convexity. That is, the risk profile looks longer and longer as the underlying asset rises, and shorter and shorter as the underlying asset falls. In this case, in order to balance that risk, market-makers had lots of BTC to sell every time BTC rallied, and lots of BTC to buy every time BTC sold off.

This action of hedging gamma can lead to a positive feedback loop between implied and realized volatility. As realized volatility drops, investors get comfortable because they do not anticipate anything crazy happening in the market in the near term and become more willing to sell options. As they sell more and more options, market-makers accumulate long gamma positions and subsequently lower implied volatility in their pricing models. They also actively hedge this long gamma position, selling BTC when it is up and buying when it is down. This act of gamma hedging, in the absence of other external factors (such as big news or a large influx of investors jumping into or out of the crypto markets), creates a dampening effect on volatility. This cycle continues, pushing the front of the implied volatility term structure continually lower while simultaneously creating upside resistance and downside support for BTC prices. 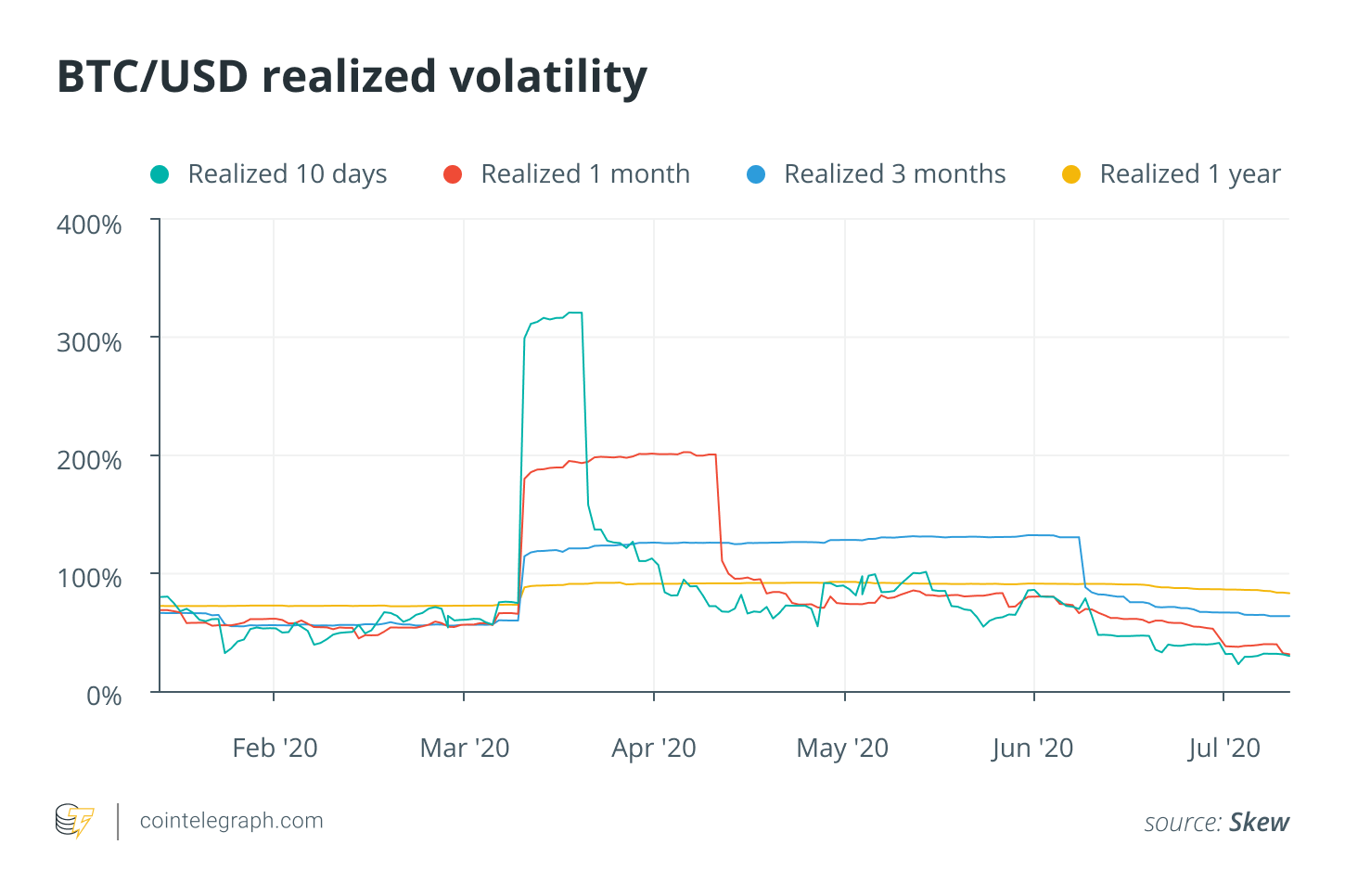 We have seen this effect play out substantially since the end of May. Realized volatility has dropped to under 30%, near multiyear lows despite the objectively uncertain world in which we are currently living. Yet even just slightly longer-dated implied volatilities, in the three-to-six month range, are still priced close to the historical long term average, in the 60%–70% volatility range. Either the current low volatility feedback loop environment will come to an end soon, or perhaps there are some savvy trades to make in order to take advantage of the disconnect in implied volatilities over the next few months.

This is part one of a two-part series on Bitcoin volatility — read part two on some common trading strategies here.

This article was co-authored by Kristin Boggiano and Chad Steinglass.

Kristin Boggiano is president and co-founder at CrossTower, an exchange operator. Kristin is a structured products, regulatory and digital asset expert who brings over 20 years of experience as a trading and regulatory lawyer and over nine years in digital asset trading and regulation. Prior to founding CrossTower, Boggiano was a chief legal officer of AlphaPoint, managing director of an algorithmic trading platform at Guggenheim, and special counsel at Schulte Roth, where she founded the structured products and derivatives division and led the regulatory group for Dodd Frank. Kristin is also the founder of Digital Asset Legal Alliance and Women in Derivatives. She earned her law degree and MBA from Northeastern University and her B.A. from Sarah Lawrence College.

Chad Steinglass is the head of trading at CrossTower, an exchange operator. He has over 15 years of experience trading equity, index and credit derivatives. He was an options market-maker at Susquehanna and Morgan Stanley and the head trader for a division of Guggenheim. He was also a portfolio manager of capital structure arbitrage at Jefferies. He is an expert in market dynamics, market microstructure and automated market-making and trading systems.