Bitcoin just flashed a TD9 sell signal on the daily timeframe and a confluence of factors are likely to lead to a post-halving sell-off.

The Bitcoin (BTC) price rose to as high as $9,065 on May 1, after peaking at $9,481 the previous day. The 35% increase in the price of BTC within nine days led a highly accurate sell signal called the TD9 to spark.

TD9, a sell sign that is a part of the TD9 Sequential system, is triggered when the price of an asset increases nine days in a row above its price four days prior to the nine-day run.

As an example, on the daily timeframe the Bitcoin price closed at $7,125 on April 19. From April 23 to May 1, BTC consistently remained above $7,125 for nine consecutive days, leading the TD9 to light up. 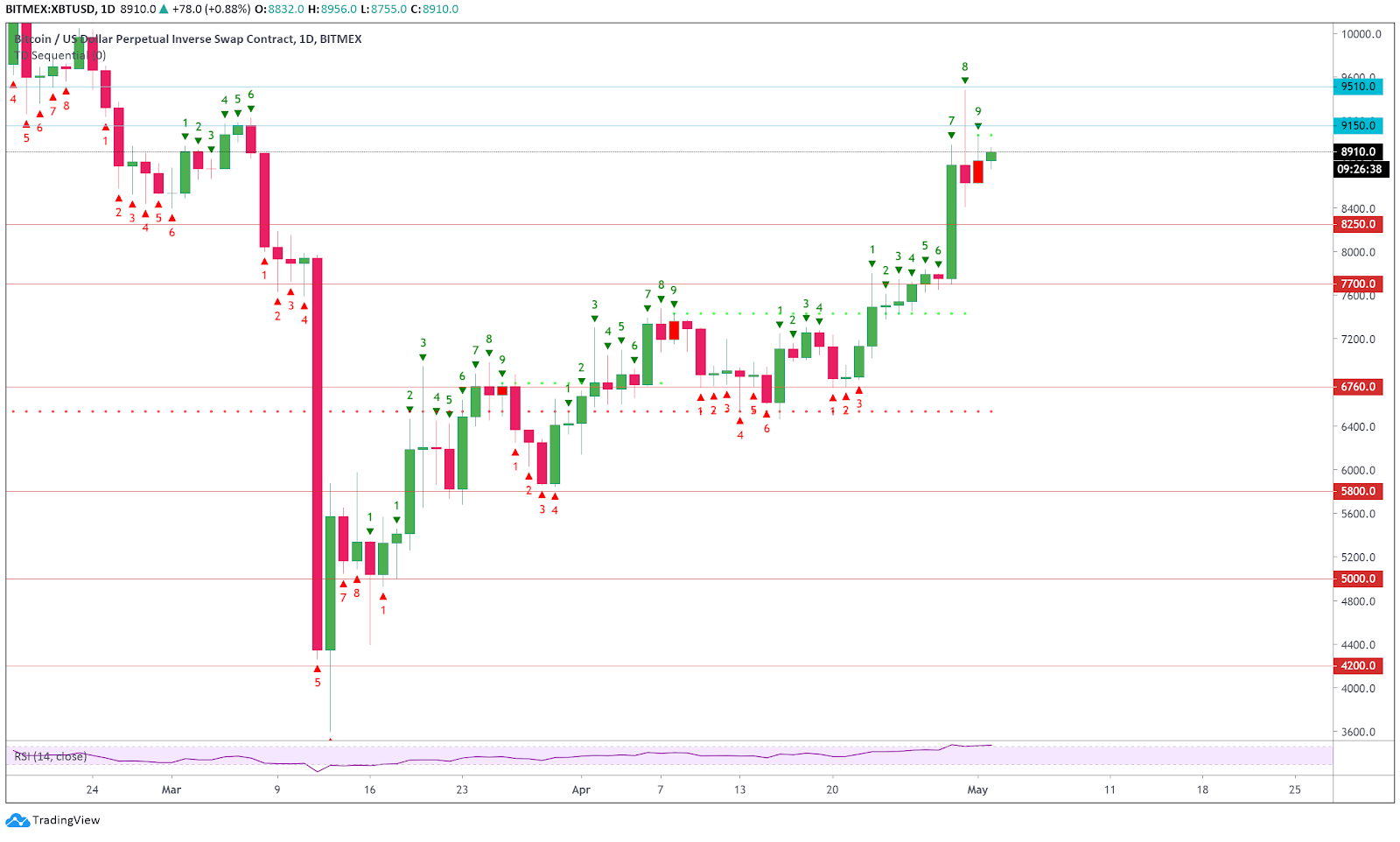 Historical data shows that the TD9 signal typically leads to a 12 to 20 percent near-term pullback in the Bitcoin price. The indicator identifies overextended movements to both the upside and the downside, showing whether BTC is oversold or overbought.

Traders expect a post-halving sell-off for Bitcoin, and TD9 matches the timing

The Bitcoin block reward halving is expected to occur on May 12 and in previous halvings the Bitcoin price tended to see a run up prior to the event then a see a sell-the-news style correction right after it.

Traders already expect the 2020 halving to have a similar effect as the impact of the 2016 halving on the price of BTC.

BTC halving right in front of our noses. Previous halving - BTC made a dip down and then made its run to ATH. If $9,450 was the top of this pre-halving pump, I expect BTC to pull a move similar to the previous halving. 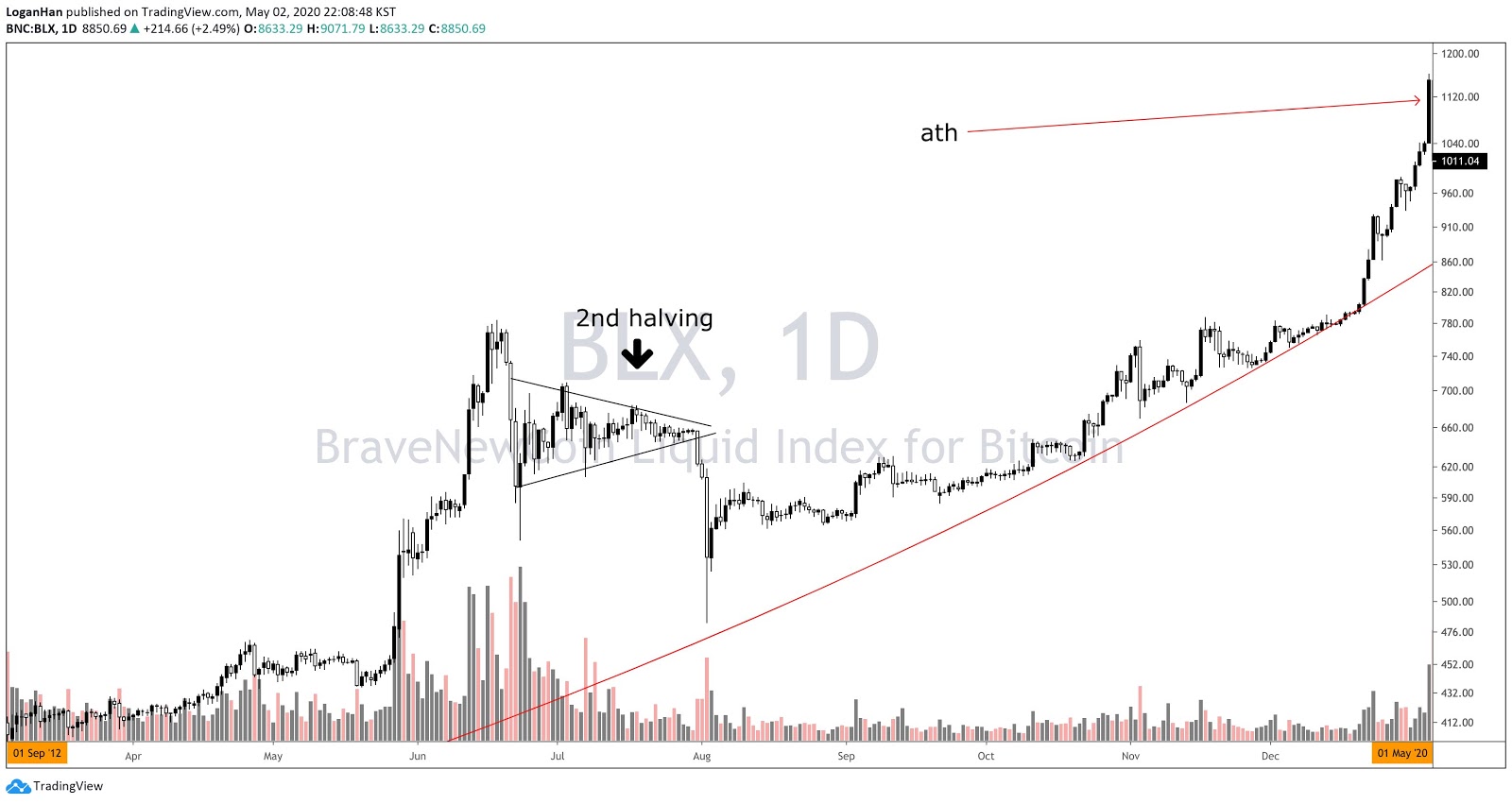 In the past two weeks, the Bitcoin price rose by 40 percent, surging past key levels such as the 200-day simple moving average (SMA) and the 0.618 Fibonacci Retracement level calculated in between $3,600 and $14,000.

Often, when an asset surpasses key levels in the way BTC did in a short period of time, it becomes vulnerable to a steep downtrend in the short-term.

The case for a post-halving sell-off in the cryptocurrency market is now stronger due to three main factors. The recent 40 percent vertical rally with no consolidation phases, the emergence of the TD9 indicator, and the overbought condition of BTC.

The Relative Strength Index (RSI) is consistently hovering at 75 percent, which suggests that BTC is overbought after its recent rally. Despite this, technical analysts remain divided on the trajectory of Bitcoin in the upcoming weeks.

The dominance of spot volume over futures solidified the theory that the rally from $3,600 to $7,000 was primarily led by actual retail demand, indicating that the rally was organic. But, the run up from mid-$7,000 to $9,400 was mainly caused by the futures market, which may suggest that the uptrend is overextended.