Bitcoin price has hit significant resistance at $9,500 putting the pre-halving rally in jeopardy with 10 days to go before the event.

Is this halving FOMO? Sustainable growth? All questions are arising in the recent movements, but overall a solid week for Bitcoin and crypto. What can the markets expect from here? 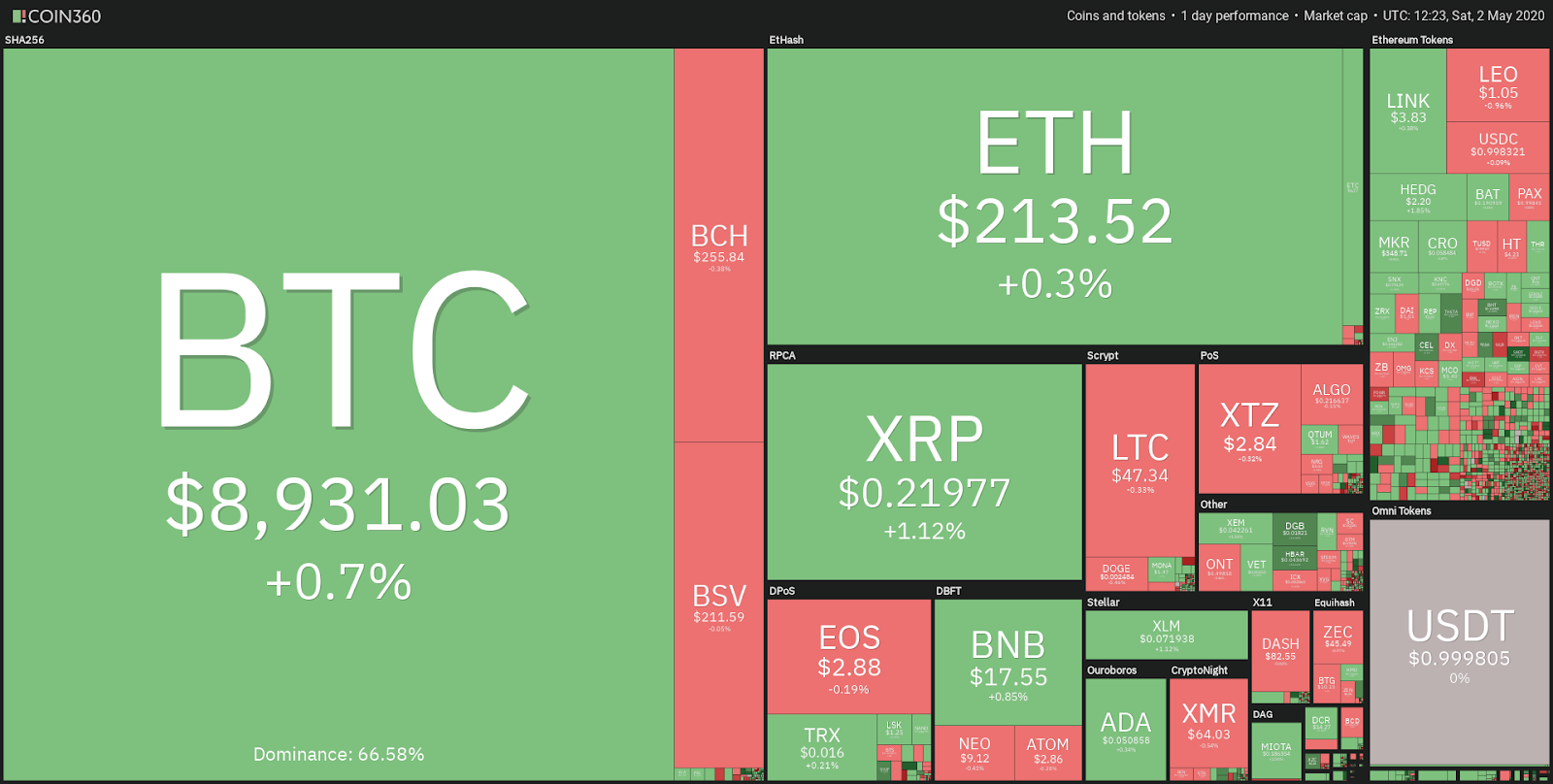 The price of Bitcoin held the $7,600 level for support throughout the beginning of the week and momentum picked up after breaking $7,800.

The rally of Bitcoin ended at the significant resistance block between $9,200-9,500. Why did it stop there? This whole resistance zone provided support throughout the summer of 2019. 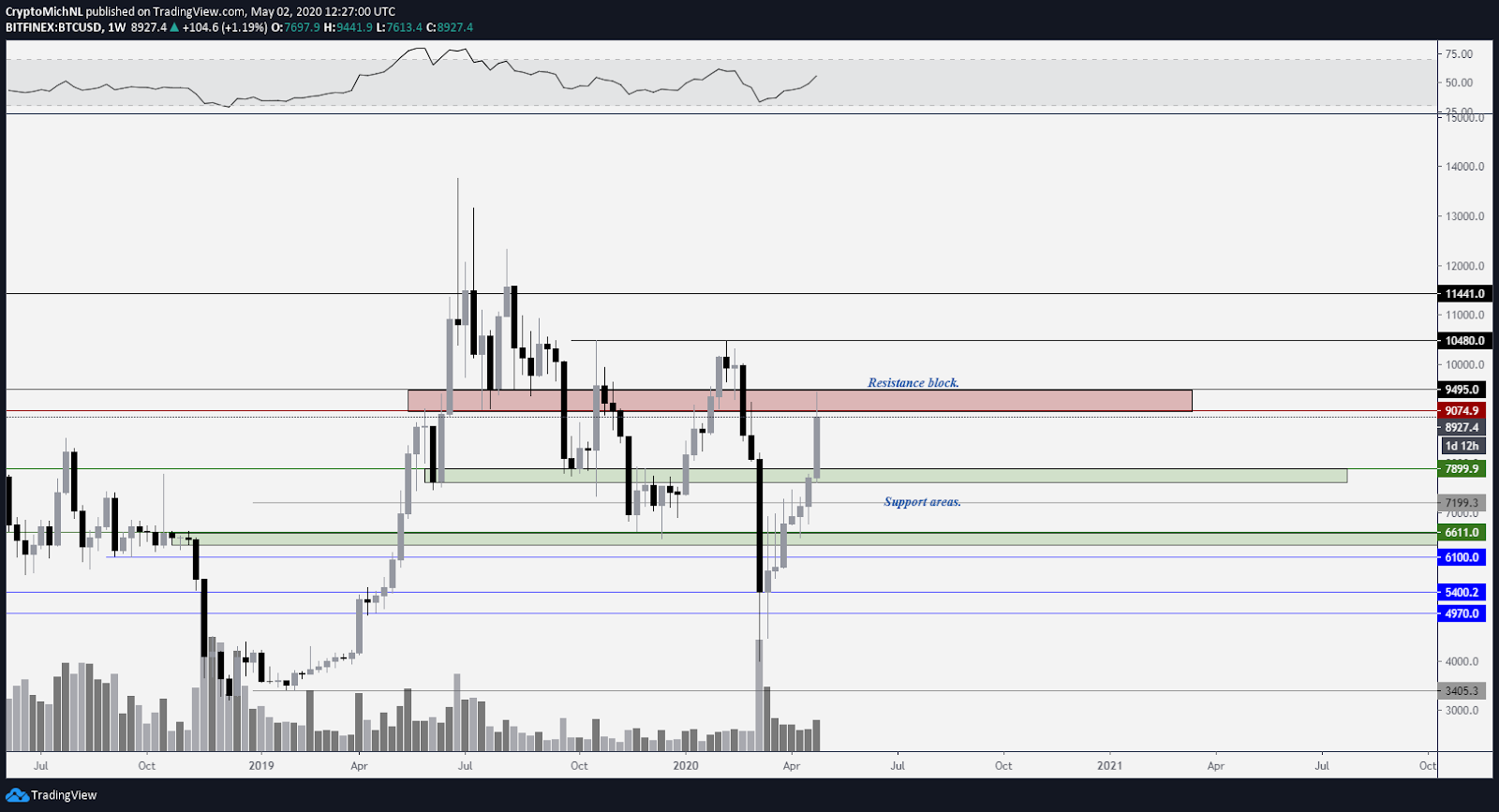 Alongside with the horizontal resistance zone, the CME futures chart showed a clear CME gap between $8,200-9,055, which closed during the given rally.

The chart is also showing support levels of $7,800 and $6,600 that could be tested if the price of Bitcoin retraces. 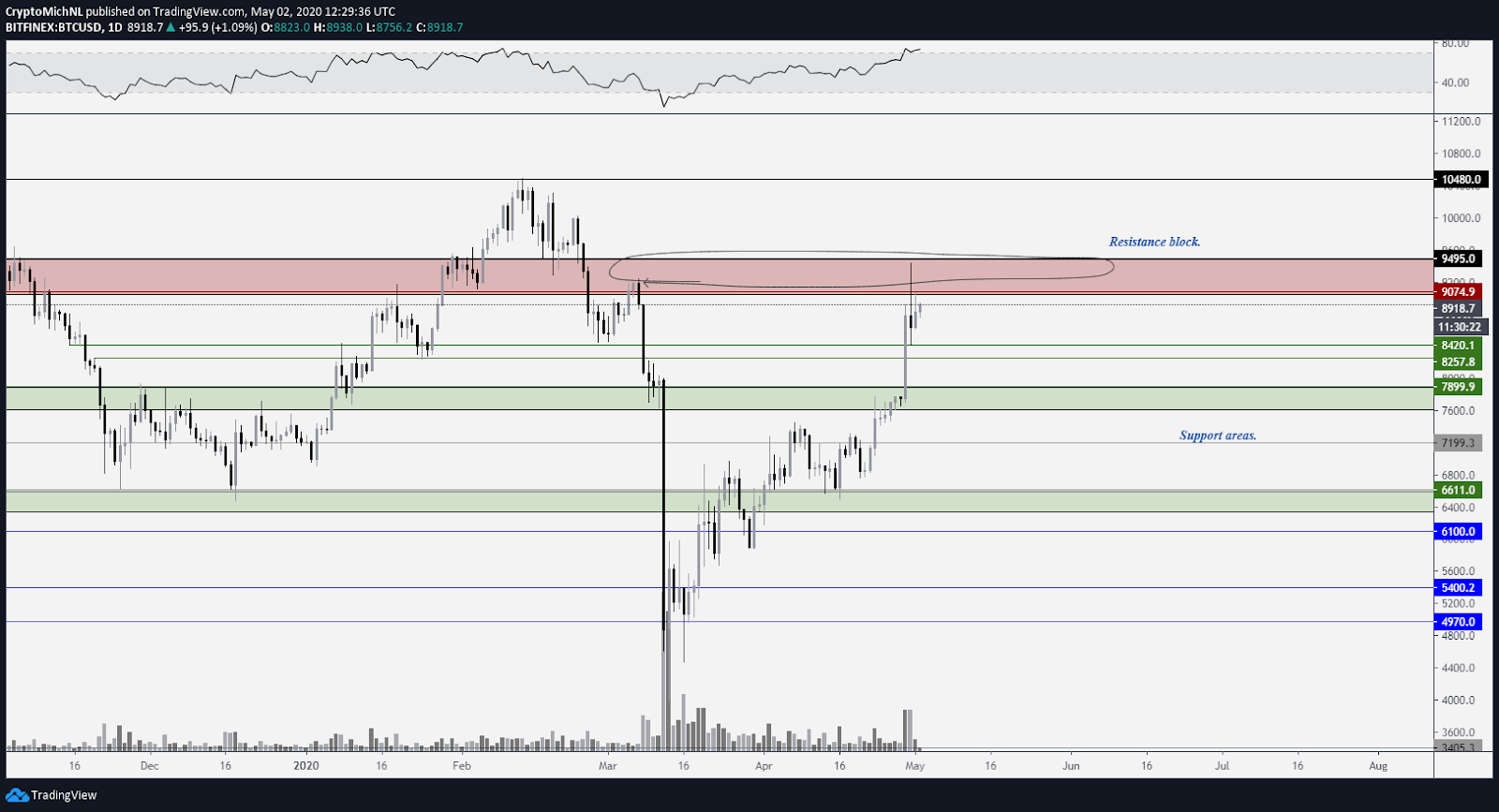 The structure is pretty straight-forward. The price was rejected hard from the $9,500 area as a $1,000 crash occurred in a matter of hours. Such a dropdown marks the confirmation of a strong resistance area with sellers clicking the sell button in this zone. 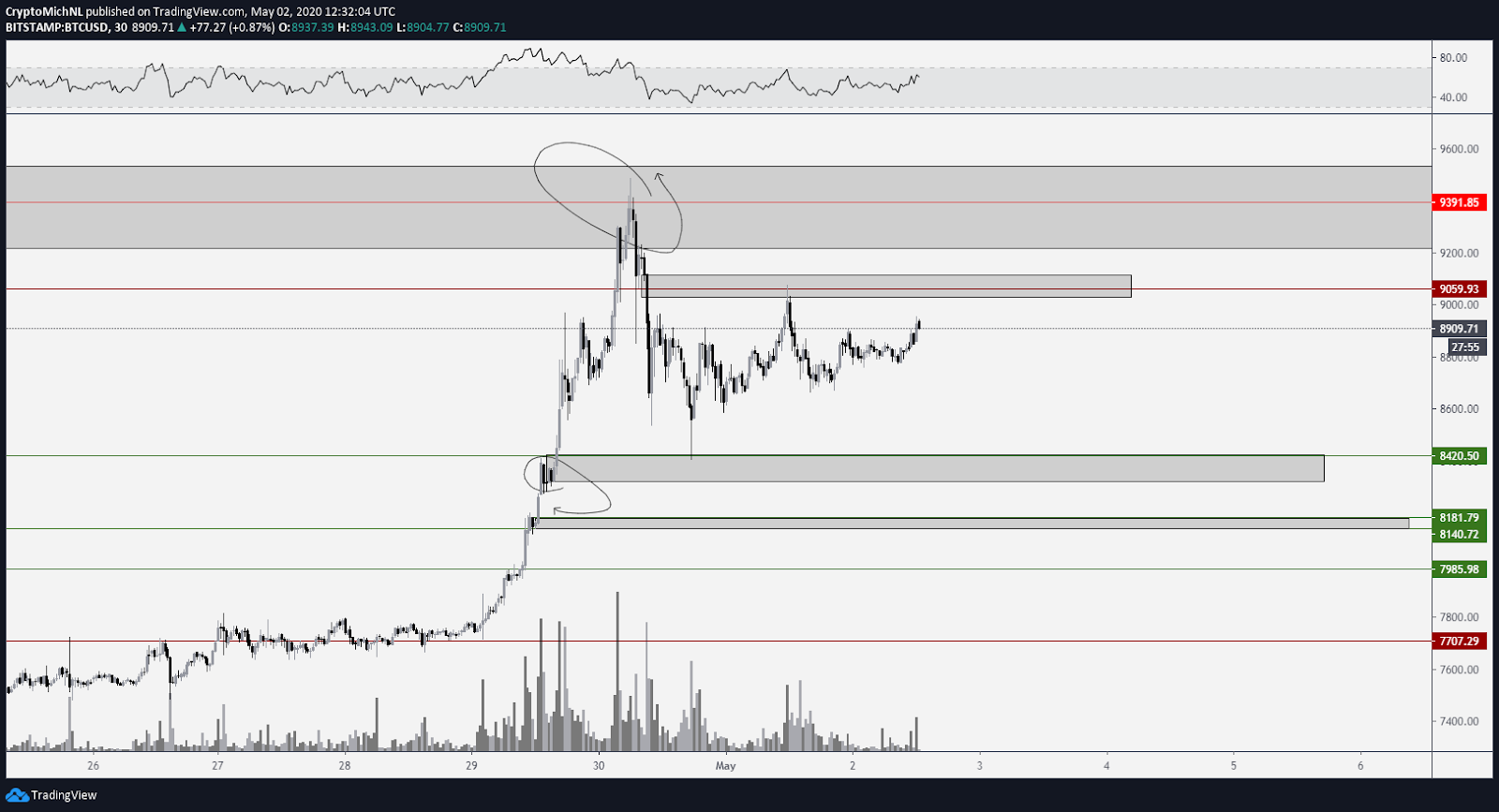 The 30-minute chart is showing a clear picture of the recent movements. Normally, I wouldn’t use these smaller time frames inside an article. However, with the recent volatility, these lower time frames can perhaps better identify a structure on the chart than the larger time frames.

Therefore, the chart is showing a clear rejection at the $9,400 area, after which a crash of $1,000 occurred. The chart shows a support area around $8,400 as the price of Bitcoin compressed there just before the big surge happened, making it a key price point that may serve as significant support.

As the chart shows, the price bounced from the $8,400 area and rallied towards $9,000. Here, the same compression occurred, which is now acting as resistance whereas $8,400 is a support level suggesting the establishment of a potential new range for the coming period. 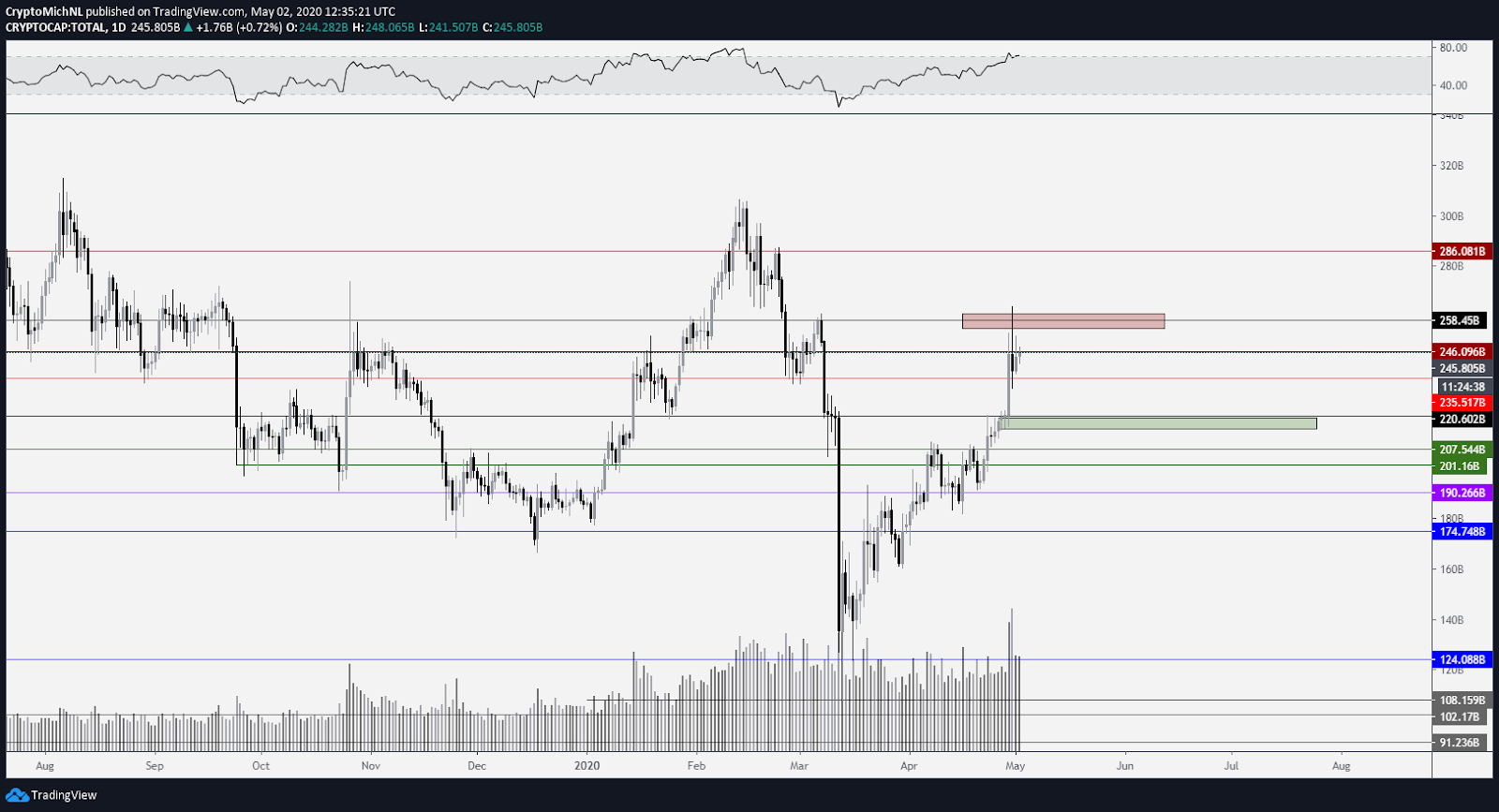 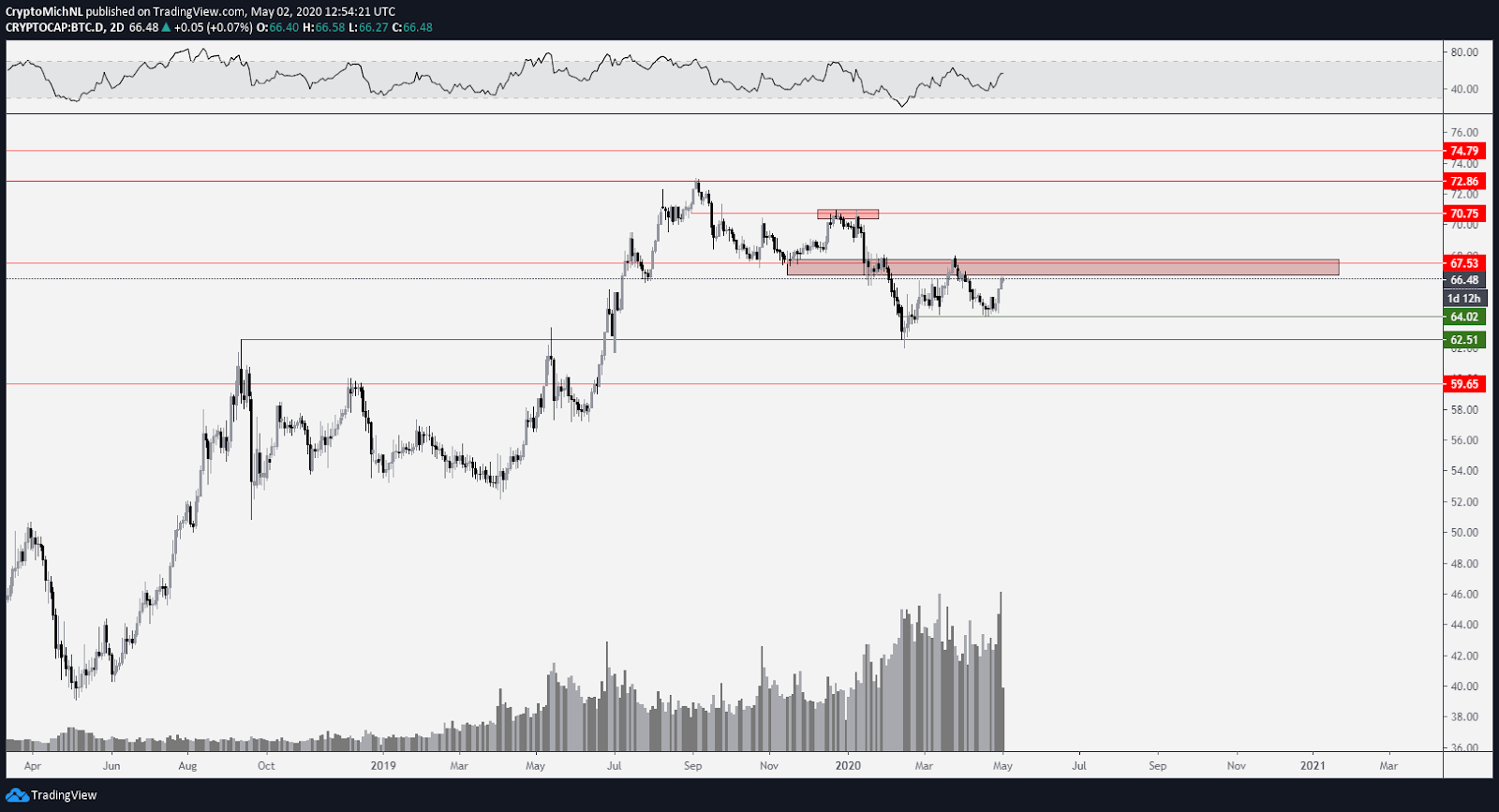 Meanwhile, the Bitcoin dominance index has been rallying up the past week. That’s normal, as people are selling their altcoins to mitigate losses against the BTC pair despite gains in USD.

As the chart is showing, the dominance level is approaching a significant level. If the dominance rallies further above 67.50%, a further dropdown of the altcoins can be expected.

Is that a strange signal? No, as the Bitcoin halving is now 10 days away, the spotlight is fully on BTC. However, when the focus goes away, money should easily flow back to altcoins, giving them a chance to catch up to BTC. 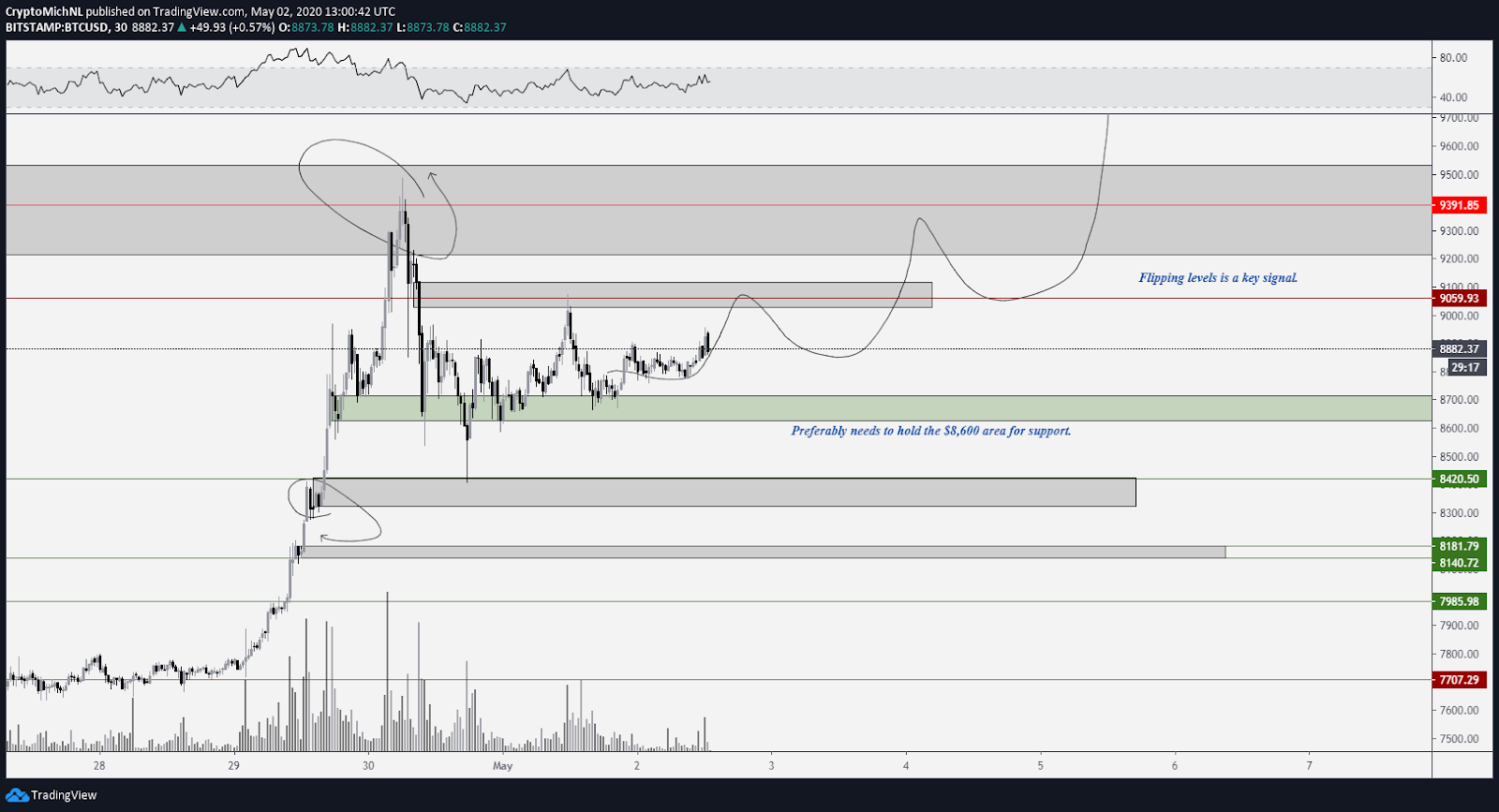 The bullish scenario and bearish scenarios are pretty easy to gather from the charts. For a bullish continuation, the price of Bitcoin needs to hold $8,600 (though tests of $8,400 as further range lows are possible).

Thus, a clear breakthrough of $9,000 is the next hurdle to clear — where the price of Bitcoin was rejected yesterday — and open the door for a continuation of the rally.

As the chart shows, flipping levels would be a pivotal trigger to watch for. Breaking and holding the $9,000 level for support warrants a continuation towards $9,300-9,400 and opens the road to $10,500 with enough momentum. 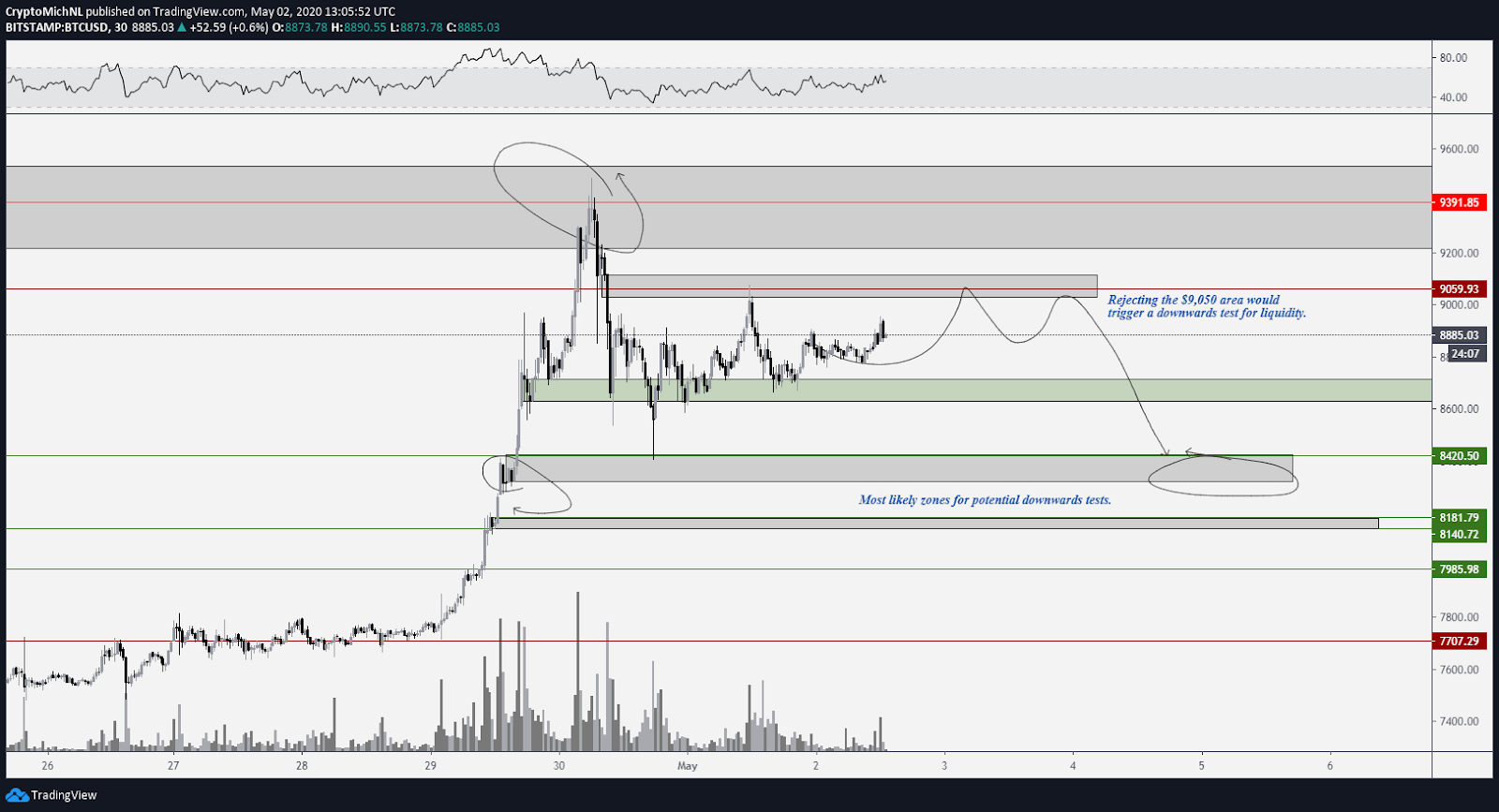 The bearish scenario is identical to the moves the price saw yesterday. Once the price of Bitcoin can’t break above $9,050-9,100 and doesn’t hold $9,000 support, it’s likely to expect further downwards momentum.

Traders should also be aware of a potential “buy the rumor, sell the news” scenario for the halving of Bitcoin. For example, the price of Bitcoin peaked three weeks before the last halving and resulted in a significant crash after the halving occurred.

Similar scenarios were also seen around the halving of Litecoin (LTC), the seventh-ranked cryptocurrency by market cap. Hence, if the price of Bitcoin can’t reclaim the $9,050-9,100 area, a further retracement of Bitcoin to potentially $7,800 or lower should not come as a surprise.