Ahead of Traditional Banking: How Africa Employs Blockchain For Financial Inclusion

On September 27, at the 73rd Session of the U.N. General Assembly (UNGA), Sierra Leone’s president Julius Maada Bio made an announcement where he declared that his country had set a new goal to create a national, blockchain-based credit bureau to “radically transform” the country’s financial inclusion landscape.

While the aim sounds ambitious, there’s some evidence that Africa’s population might never need traditional banks per se. Instead, they could start managing their money through newer, decentralized methods.

What does blockchain have to do with financial inclusion?

First, it is important to outline the term unbanked — these are people who don’t have bank accounts. Consequently, they are cut off from vital financial services such as credit and money transfers. According to the World Bank's financial inclusion database, in 2017 there were around 1.7 billion adults who are technically unbanked, which is roughly 30% of the global population. In the US alone, which is a developed country with robust economic infrastructure, there are about 9 million households who are unbanked, as per the 2015 Federal Deposit Insurance Corporation’s report. 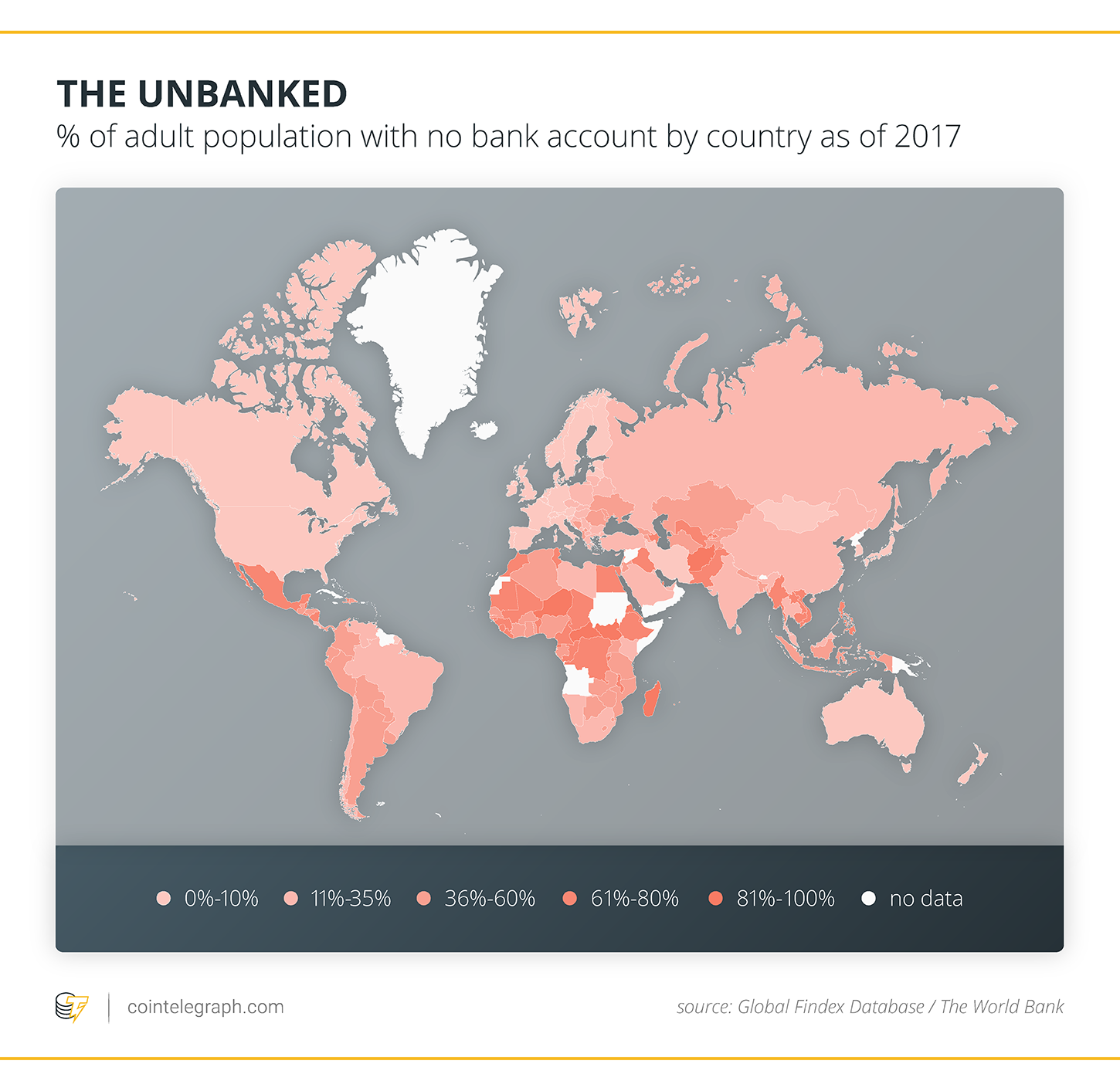 There’s also people who are underbanked, a distinct group of the unbanked — they might have access to a bank account, but are nonetheless deprived of banking services such as credit cards or loans. The underbanked either don’t have literal access to regular banking (for instance, physically or due to the language barrier) or don’t meet conditions of a financial institution (for instance, they don’t have clear identifying information, and hence don’t qualify for “Know Your Customer” practices).

Even if a bank decides to extend credit or provide other services to an underbanked person, most likely they’ll charge high interest rates to downplay the risk. For instance, in January 2018 Bank of America started charging its poorest customers 12$ per month just for the privilege of having a checking account. Moreover, in some developing countries, like Venezuela, having a bank account is useless because of the hyperinflation and overall economic situation.

Blockchain has the potential to help the unbanked, serving as a more secure financial alternative. Namely, it deals with at least two major problems associated with people who are not overseen by traditional financial institutions.

As mentioned above, people might be unbanked due a number of reasons, but in developing countries they often lack simple identification due to the impoverished nature of local infrastructure. In 2017, the World Bank’s "Identification for Development" (ID4D) program revealed that more than 1.1 billion people worldwide exist without proof of identity, 500 million of whom are estimated to live in sub-Saharan Africa.

Without IDs, people can’t participate in financial activities provided by banks (i.e. have a bank account, obtain credit, etc.). With blockchain, however, individuals can receive a digital identity for use in their banking — all they have to do is own a smartphone, while biometrics will do the rest.

Blockchain-backed startups like London-based Humaniq, which introduced a facial and voice identification system as a method of authorization for people with no paper IDs. It also creates a bank-like environment inside a user’s smartphone in several African countries including Kenya, Republic of Cote d’Ivoire, Botswana, and Ghana. Despite the majority of African households being low-income, in 2017, the level of mobile phone penetration was estimated at 80 percent, meaning that there is a market for such solutions. 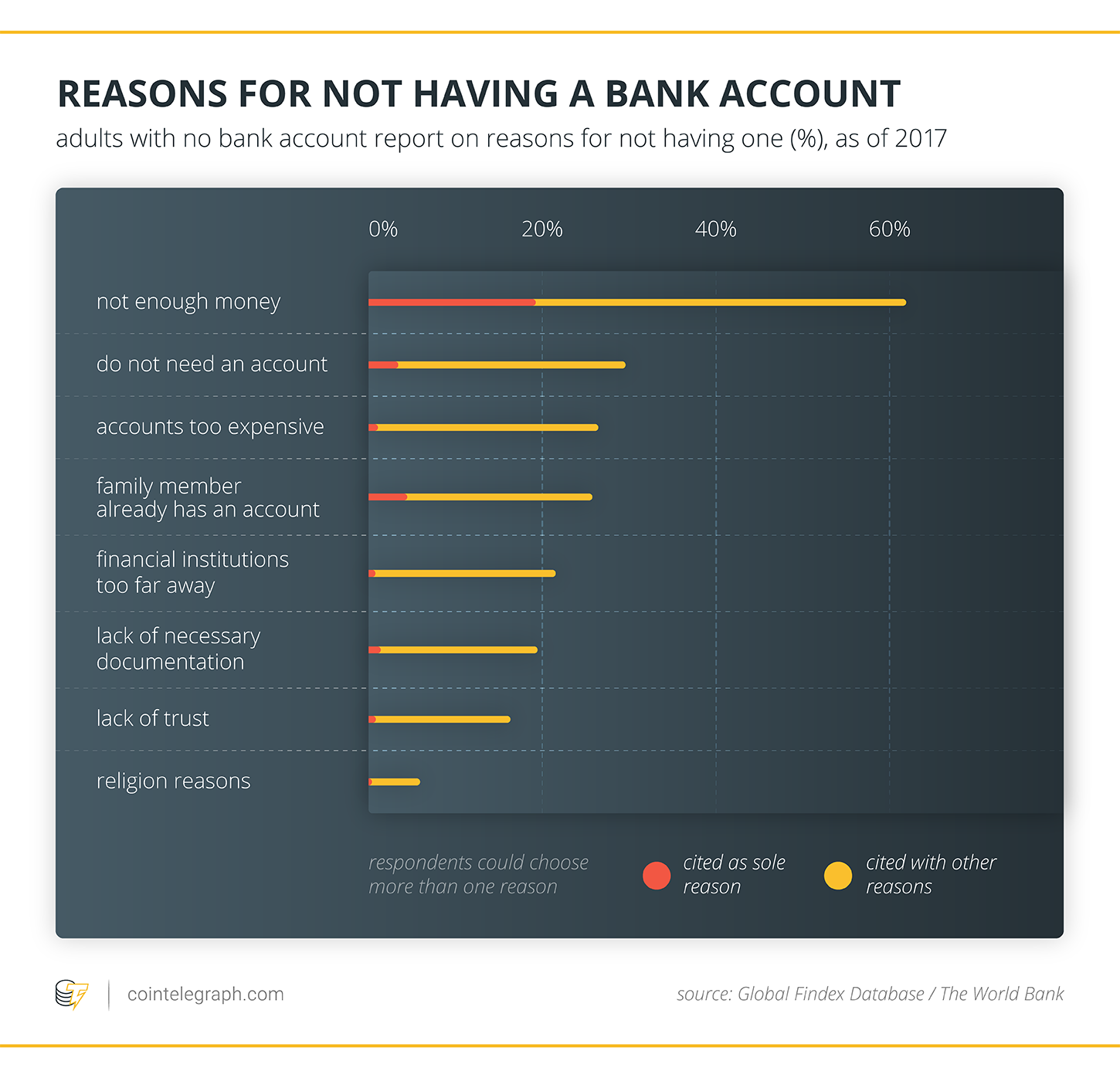 To extend credit, financial institutions rely on risk assessment and credit scoring. With blockchain, all parties can access one’s credit worthiness before issuing a debt, therefore reducing friction and increasing transparency. Individuals get the ability to use their data - verified by a decentralized public ledger - to attest to their creditworthiness.

That’s what startups like Bloom are trying to achieve. “With Bloom, identity fraud is far less rampant since every credit check no longer requires the exposure of sensitive personal data,” the startup co-founder argued in an interview with Forbes. “By disintermediating middlemen, who are no longer necessary to establish trust, the blockchain cuts out bloat and rent-seeking. By solving for trust without centralization, decentralized organizations are able to thrive at a scale never before possible.”

The Sierra Leone national blockchain-powered credit bureau will attempt to deal with both of those problems.

Thus, Sierra Leone’s president Julius Maada Bio has announced the plan to create a national, blockchain-based credit bureau. The initiative is the result of a collaboration between technology non-profit Kiva, the U.N. Capital Development Fund (UNCDF), and the U.N. Development Programme (UNDP).

The cornerstone of the project is the Kiva Protocol, a system which will reportedly establish a national digital identification system using distributed ledger technology (DLT). It will help to “ensure that every citizen in Sierra Leone has secure and complete ownership of their personal data and information”, as per the press release.

Through Kiva, the borrower can apply for a loan. Then, the loan undergoes an approval process (the company’s website claims that direct loans are approved through the so-called “social underwriting," where trustworthiness is determined by friends and relatives lending a portion of the loan request, or by an “approved trustee vouching for the borrower”). After that, the loan is posted to the platform for lenders to review and support. Finally, lenders crowdfund the loan in increments of $25 or more. The platforms warns lenders that their loan might not be repaid in the end, although the repayment rate is allegedly as high as 96.8%.

Kiva has been operating since 2005, and has reportedly crowdfunded over a million loans totaling more than $1 billion, but it is the company’s first effort to put the system on blockchain rails. The non-profit claims that they selected Sierra Leone for the first implementation of their DLT-protocol because the country “currently only has one credit bureau that covers 2,000 people – less than 1 percent of the country’s population”.

Kiva will allegedly provide access to their digital wallet both online or offline — either via a mobile app, or through the company’s partners: microfinance institutions and government “agents”. The system will work similarly to the original scheme, but with some minor alterations:

“This [procedure] enables all credit events to be captured in a single ledger, with access to the digital wallet controlled by the individual. For example, if someone has verified credit history with a local lender or Kiva Field Partner and wants to apply for a loan from a national bank, they can grant that bank one-time access to their credit history. However, no institution or the government can access the information without the owner approving. The system is also very low cost to operate, eliminating the type of fees that might prevent people or institutions from using other credit reports”.

Hence, the new system is intended to tackle both of the aforementioned barriers that many citizens of developing countries face when they attempt to access financial services – a lack of both formal identification and a verifiable credit history:

Using a blockchain system will further ensure that the country’s citizens retain “secure and complete ownership of their personal data and information,” as it offers a distributed alternative to storing individuals’ identity data in centralized data silos (which have proven to be problematic as well — when the consumer credit reporting agency Equifax was hacked in 2017, the private information of 143 million Americans was stolen from their servers).

According to Kiva, their DLT protocol in Sierra Leone will begin to get implemented in 2019, and “the first stage” of the project will take about three years.

Xavier Michon, Deputy Executive Secretary of UNCDF, has declared that the Sierra Leone system “could serve as a model for both developing and developed nations in the future,” and will represent one of the most advanced and secure credit bureaus in the world. Significantly, the country isn’t entirely new to the technology — earlier this year, Sierra Leone became one of the first countries to trial the use of blockchain during elections via a partnership with a Swiss-based company called Agora (although the experiment didn’t necessarily go as planned).

As The Economist argues, Africa has already experienced the leapfrog economic model when mobile telephones emerged on the continent, and “within just a few short years hundreds of millions of people were able to phone and text for the first time, bypassing monopolistic state-owned phone companies that kept customers waiting for landlines indefinitely”.

The same could happen with banking — the unbanked population of Africa can hardly be approached by brick and mortar financial institutions at this point due to the high costs of infrastructure and overall low income level of local population. Thus, being locked out of banks, the unbanked tend to rely on alternative forms of finance. Indeed, according to the “Africa and Middle East Alternative Finance Benchmarking Report” issued by the Cambridge Center for Alternative Finance in 2017, the largest financial model in Africa is microfinance. Donation-based crowdfunding is the second most prominent model there, and the third largest model on the continent was peer-to-peer business lending.

For instance, Kenya raised $16.7 million from online channels in 2015, as per the Finnovating for Africa report, which tracked 65 lending and financing startups across Africa. That partly could be attributed to M-Pesa, a money transfer, finance and microfinance service that is based entirely on clients’ mobile phones. Launched by Vodafone in 2007, it operates in Kenya and is rumoured to integrate Bitcoin in the future.

The banking gap in Africa could indeed be closed by way of cryptocurrencies and other fintech solutions. As BBC reports, many Africans have started to turn to cryptocurrencies due to low remittance rates and the state of traditional banking in the region, while The Economist suggests that Africa has become ripe with various startups, “allowing lenders quickly to assess credit risks, insurers to sell life and medical cover in small chunks and new energy firms to sell electricity by the day or week”. According to Finnovating Africa, the continent hosts at least 300 fintech startups.

Makhtar Diop, Vice-president for Africa at World Bank Group claims that tech startups in Africa raised $129 million in funding in 2016 alone, while the number should most likely be higher for 2017 and 2018, with continuing blockchain adoption. Nevertheless, Diop warns that besides all of the potential for a frog leap, there are still some serious deep-rooted obstacles for financial development in Africa, like poor access to education.