UPDATED: Anthony ‘Pomp’ Pompliano Suspended From Twitter — for an Hour

Co-founder of Morgan Creek Digital and noted crypto advocate Anthony Pompliano has been suspended from Twitter.

12454 Total views
234 Total shares
Listen to article
0:00
News
Own this piece of crypto history
Collect this article as NFT

As of 19:30 UTC on Feb. 13, the Twitter account of the co-founder of Morgan Creek Digital and noted crypto personality Anthony Pompliano was suspended, only to return to action within a matter of hours.

A short suspension, possibly for pitching

Given Pompliano’s position within the crypto community — where he is often known by the moniker “Pomp” — the suspension was the subject of a great deal of speculation during the short time that the account was actually offline.

One Twitter user noted that earlier that day, Pompliano had used a viral tweet from Democratic Presidential hopeful Mike Bloomberg attacking President Trump as a vehicle to advertise his podcast: 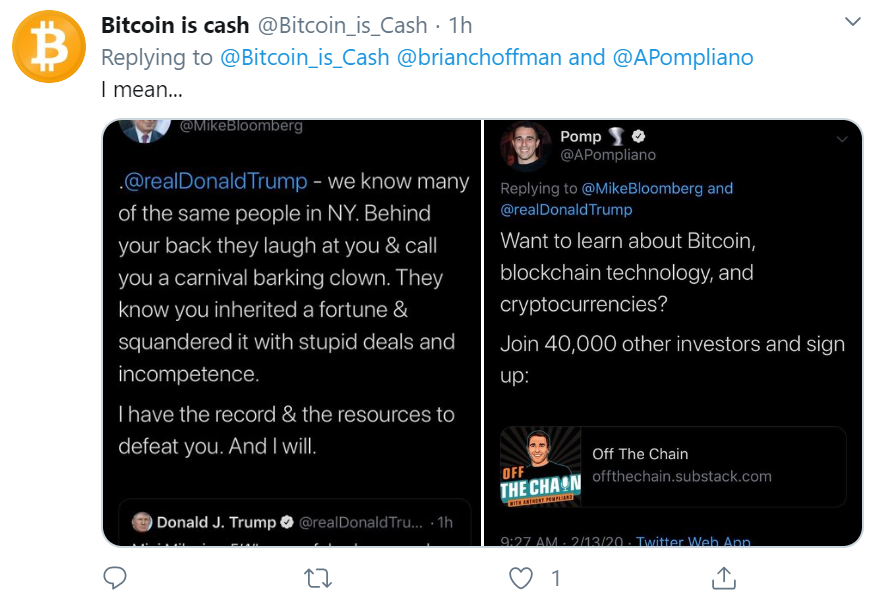 It is possible that Twitter took issue with Pompliano’s approach to self-promotion.

The account was back online by 4:28 PM EST (19:28 UTC), as evidenced by a tweet from Pompliano that was only the hashtag #FreePomp and a link to the music video for Mase’s “Welcome Back.”

Pompliano is a noted supporter of cryptocurrency assets in general and Bitcoin in particular. Earlier this week, he predicted that BTC’s price was already en route to $100,000.

Twitter had provided no official explanation as of press time. However, this is not the first time that Twitter’s relationship to crypto has been hostile. In 2018, the social media platform banned crypto advertising.

Feb. 13 21:45 UTC: This story has been updated with more information and following the return of Pompliano’s Twitter account to action.