Bitcoin is down over 13% on the day, inviting competing interpretations as to what could have triggered the top coin’s downward turn.

Bitcoin (BTC) is down over 13% on the day, inviting competing interpretations as to what could have triggered the top coin’s downward turn. 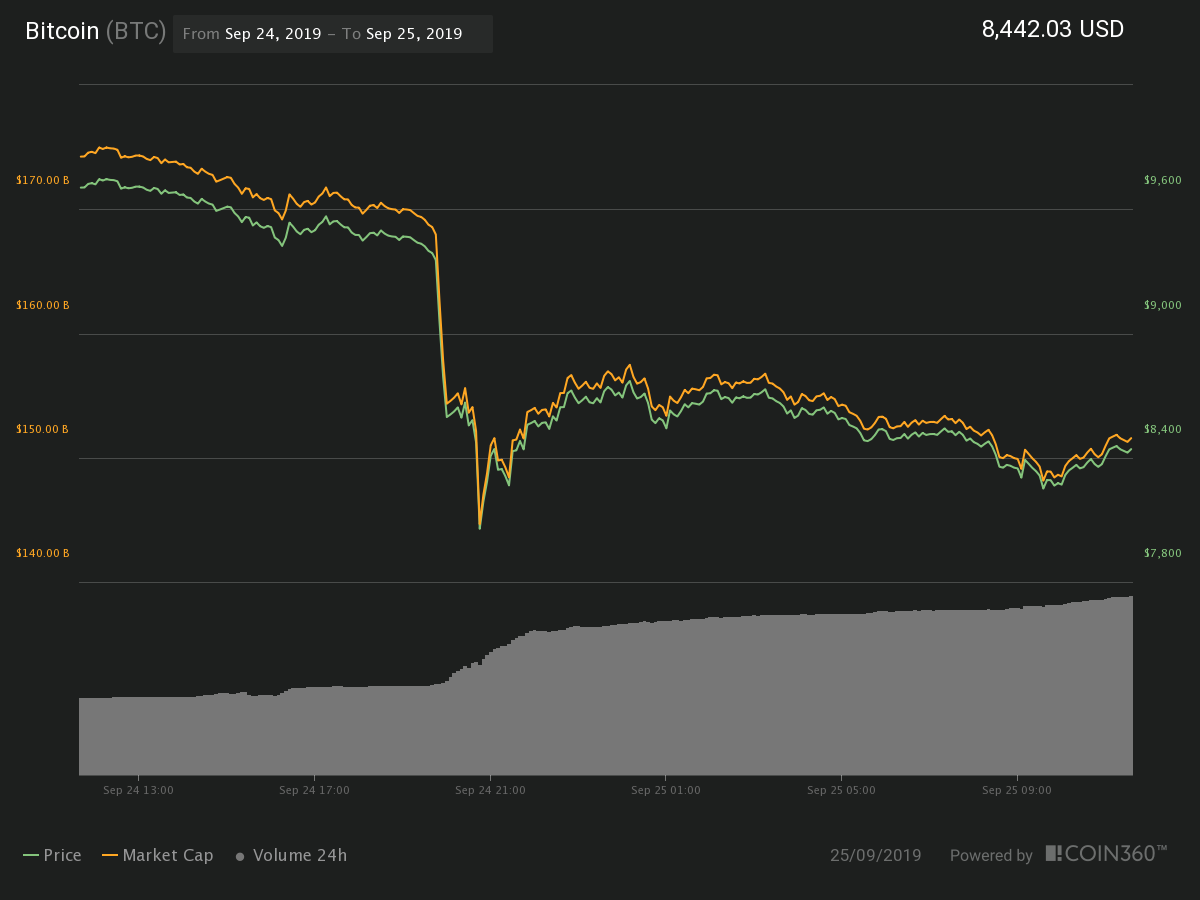 Is Bakkt to blame?

Among the most popular theories among cryptocurrency commentators is the market’s disappointment at the apparently tepid uptake of Bakkt’s just-launched, physically-settled Bitcoin futures contracts among institutional clients.

The contracts — which break the mold by being settled in Bitcoin, rather than in fiat currency — went live on Sept. 22, in what had been an eagerly-anticipated moment for the cryptocurrency sector as a whole.

However, sluggish volumes soon after the product’s launch may have dampened investor sentiment, as onlookers took stock of the apparent fact that institutional demand for Bitcoin exposure may not be as robust as previously assumed.

59 BTC has traded on the platform over the 24 hours before press time; a total of 166 contracts traded yesterday, Sept. 24, according to fresh coverage from Reuters. Jamie Farquhar, portfolio manager at London-based crypto firm NKB Group, told reporters:

“It’s one thing to give institutional money access to BTC. It’s another thing to make them comfortable enough to actually buy it.”

The Bakkt thesis has not gained unanimous support, with many considering a post-mortem within just days of the product’s launch to be premature.

Other commentators are pointing to technical factors subtending Bitcoin’s price weakness — as a Cointelegraph price analysis has covered in-depth this week.

Yet a further thesis making the crypto Twitter rounds is more macroeconomic and geopolitical in nature — with breaking news of an impeachment inquiry into United States President Donald Trump over his highly controversial summer call with the Ukrainian president.

Some have thus correlated Bitcoin’s weak market moves with this wider picture, as traditional markets reel from the latest jolt in U.S. politics. Analyst Holger Zschäpitz tweeted on Sept. 25 :

Several crypto and traditional market analysts, moreover, consider that the lower interest rates endorsed by Trump represent “rocket fuel” for Bitcoin’s price — adding more grist to the mill for the argument that his controversial presidency is, on balance, broadly positive for the cryptocurrency.

The president has been increasingly vociferous in regard to the Federal Reserve’s monetary policy, tweeting earlier this month in favor of more dramatic action:

“The Federal Reserve should get our interest rates down to ZERO, or less, and we should then start to refinance our debt. INTEREST COST COULD BE BROUGHT WAY DOWN, while at the same time substantially lengthening the term. We have the great currency, power, and balance sheet.”