Bitcoin price back above $7,000 and rising BTC dominance looks increasingly bullish as several resistance levels stand in the way of a definitive breakout.

Other major cryptocurrencies also made similar moves in price, with Ether (ETH) regaining $130 having traded as low as $125.50 and XRP reclaiming $0.19 having previously traded at $0.185.

Bitcoin dominance remains above 68% and looks like it’s on its way to grab 70% of the market share of the total cryptocurrency market capitalization. 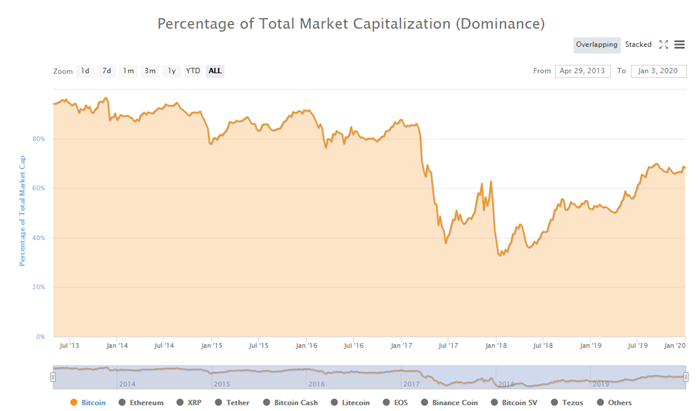 The 4-hour chart shows Bitcoin having had a large bounce from $6,850, completely engulfing the previous day’s bearish price action sending Bitcoin below $7,000. The move higher meant reclaiming the point of control, which has been acting as an area of support and resistance.

Bitcoin price action remains with a diagonal resistance on lower time frames, which has led to the testing of the $6,000s. So far, this area has been one of demand and is showing signs of showing a higher low, which would imply that buyers remain interested in this area for now, although volume continues to subside suggesting that a bigger move is in the works.

For the bulls, the diagonal resistance currently in the $7,400s must not only be overcome but also close above this level. Weekly resistance remains overhead at $7,555 and has not closed above it since the beginning of November.

These two levels of resistance are key for the bulls to surpass and it seems likely that a higher low from the upper $6,800 could be a catalyst for an explosive move.

Bitcoin’s day candle shows as bearish engulfing with a clear higher low, which is an encouragingly bullish sign. It is worth noting that despite the apparent higher low, Bitcoin has failed to close a higher high at these prices. So again, $7,400 is an important level.

The majority of price action has taken place between the point of control and weekly resistance with low volume dips in price below being bought up.

The moving average convergence divergence indicator, or MACD, is printing a higher high on the histogram while it is also crossed bullish with its signal line, highlighting the increase in bullish momentum off the back of this move.

However, the MACD line remains below zero for now meaning the underlying 12 and 26 exponential moving averages are currently yet to cross bullish.

The RSI continues to trend up above 50 having built on a bullish divergence, which is a bullish sign in this period of consolidation.

If Bitcoin were to build upon the bullish price action and break diagonal resistance, the decreasing volume gives support for a bullish argument for an inverted head and shoulders pattern forming that would suggest a move up to around $8,700, which could occur relatively quickly if there is a short squeeze.

Price action on the weekly candle clearly shows price action squeezing up against resistance. The bearish argument is that this is a retest of previous support, which is once again being rejected. This, combined with the overall downtrend heeds a warning to overzealous bulls.

The spot exchange volume continues to drop off and is now as low as it was in early 2019. The weekly MACD also show an unconfirmed bullish divergence with a higher high in the histogram and a lower low in price, but still awaits confirmation on a bullish cross with its signal line. The RSI is also below 50, which is bearish.

Therefore, the low timeframe bullish scenario could arguably be only a pause on the way to $5,000s until the weekly resistance is broken and momentum shifts to the upside.

The CME futures chart highlights the point of control at $6,400 being of significant importance, which is also bringing in a notable level of weekly buying volume since July.

Below this level, the next high volume node is the low $5,000s, which is also the 200-week moving average as mentioned earlier.

The CME futures have risen to highs of $290 over spot back in June and the premium has been compressing ever since. It appears to be breaking out of that trend at the moment, which is a sign that there is a shift in sentiment over the future price of Bitcoin. 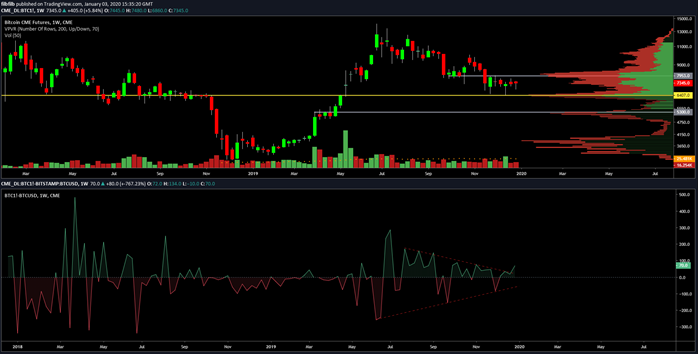 It is evident that Bitcoin bulls are in control of the $6,000 level at present, but there is a continued level of supply at $7,500.

The outcome of the diagonal resistance is likely to play a pivotal role. Break it and BTC price is likely to move into the $8,000s. But if the bulls run out of demand in the mid $6,000s, a swift collapse in price to the low $5,000s and the 200-week moving average would most likely follow.

The views and opinions expressed here are solely those of the author and do not necessarily reflect the views of Cointelegraph. Every investment and trading move involves risk. You should conduct your own research when making a decision