Bitcoin price abruptly rallied 6.5%, reclaiming yesterday’s losses and attempting to set a daily higher high above $7,300 but will more buyers now step in?

In a stunning turn of events, Bitcoin (BTC) price swiftly reversed course and rallied 6.4%, reclaiming ground lost over the last 24-hours and briefly topping $7,288 before pulling back to $7,200.

Global oil prices have also rallied by nearly 3% in the wake of an airstrike at Baghdad's airport ordered by United States President Donald Trump that has reportedly killed the head of the Iranian Revolutionary Guards' elite Quds Force, General Qasem Soleimani.

“Yesterday everybody freaked out with a small drop. Now price is higher and euphoria starts again.

As suggested in the previous market update, a high volume spike pushed Bitcoin price to the Bollinger Band indicator’s moving average at $7,200 and into the 61.8% Fibonacci retracement level. 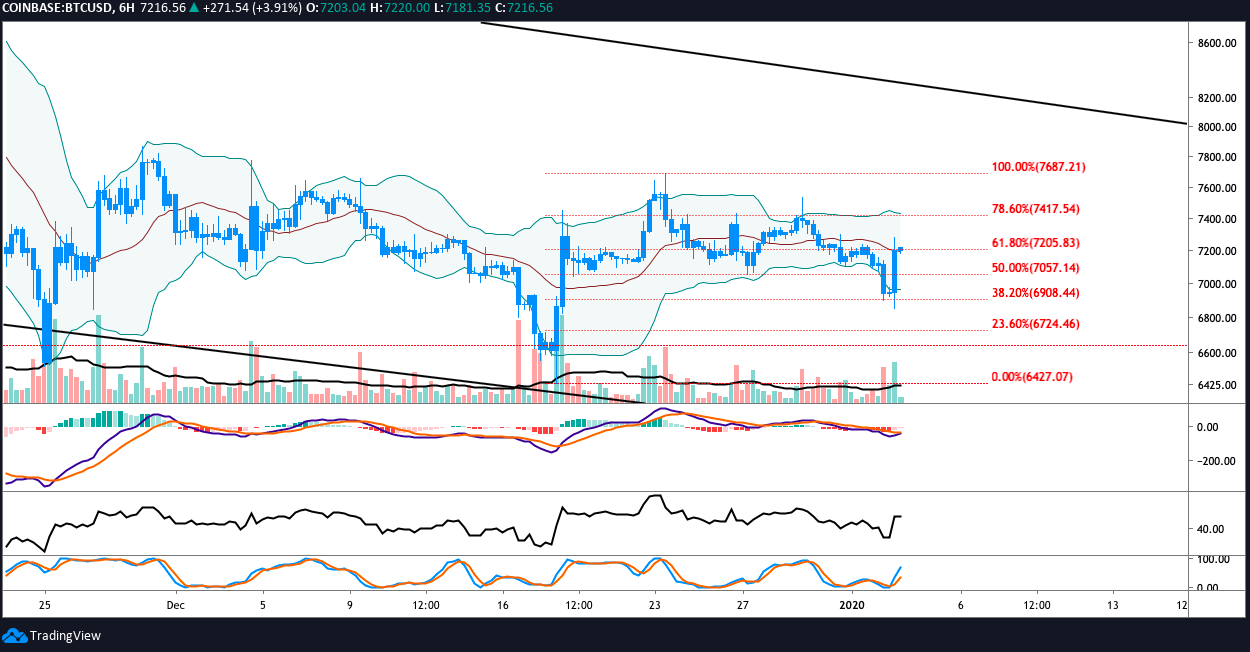 On the 6-hour timeframe, the moving average convergence divergence (MACD) histogram shows a shift in momentum and the MACD has pulled up sharply and appears en-route to cross above the signal line.

The relative strength index (RSI) also rose into bullish territory and currently appears to have topped out at 51. 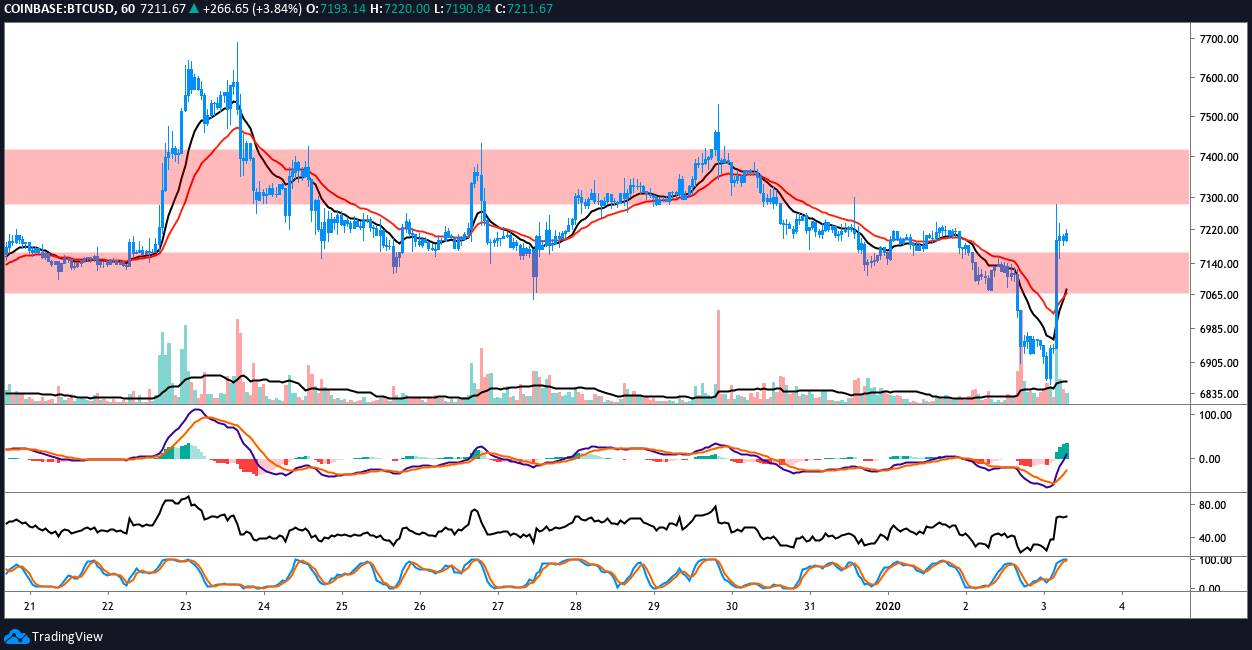 Interestingly, on the 1-hour timeframe, traders will note that today’s spike in buy volume nearly matches Jan. 2 sell volume, which took price down to $6,900. The move to $7,288 was exciting and earlier losses were pared, but in order for continuation toward $7,300 and $7,400 to occur, buyers need to step in and sustain purchasing volume. Failure to do such could see the price pullback below the Bollinger Band moving average ($7,200) and return to the $7,000 to $6,850 range of the previous day.

Traders should watch the hourly chart to see if the candlestick arrangements hint at continuation as the impending bull cross on the 4 and 6-hour MACD can be misleading if buy volume is not present. 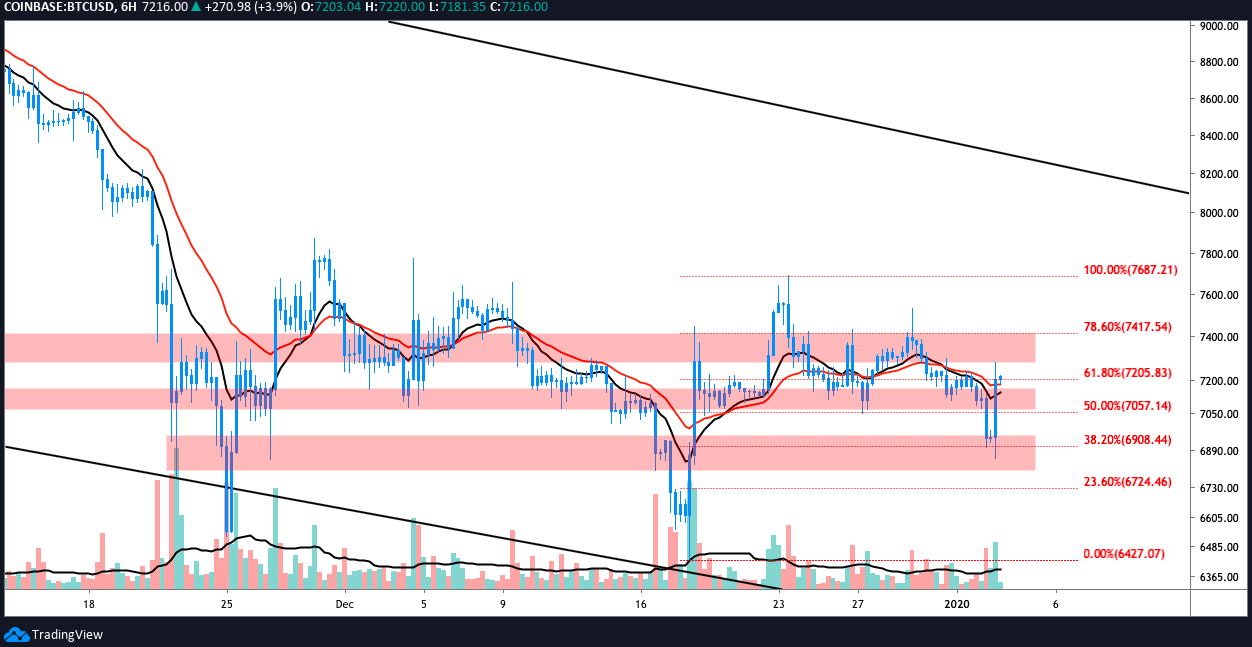 Traders that rely on the 12 and 26-period exponential moving averages (EMA) for guidance will be happy to see that the price is now above both moving averages. But Bitcoin still needs to gain above $7,300 and set a daily higher high above $7,530 and $7,687 to support any calls of a trend reversal.

For the short-term, continuation to $7,400 would be encouraging as the resistance could be flipped to support and serve as the base for further continuation throughout the weekend and coming week. 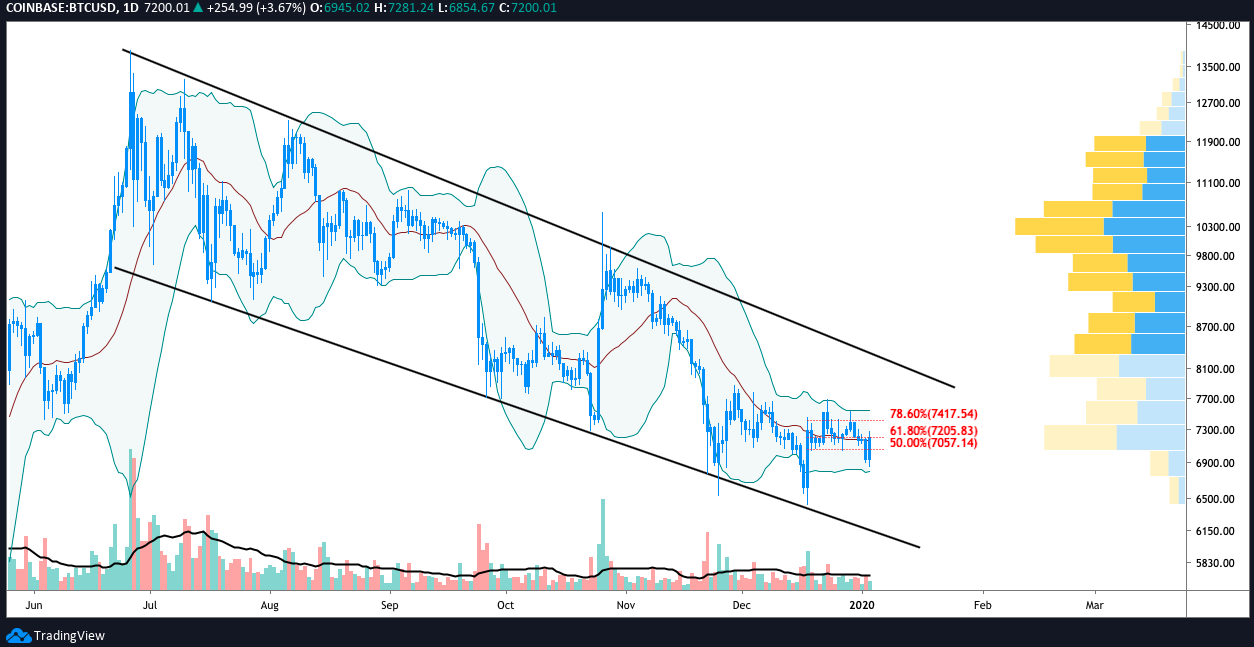 The daily time frame also paints a rosy picture with the MACD avoiding a bear cross and the histogram flipping positive above 0. 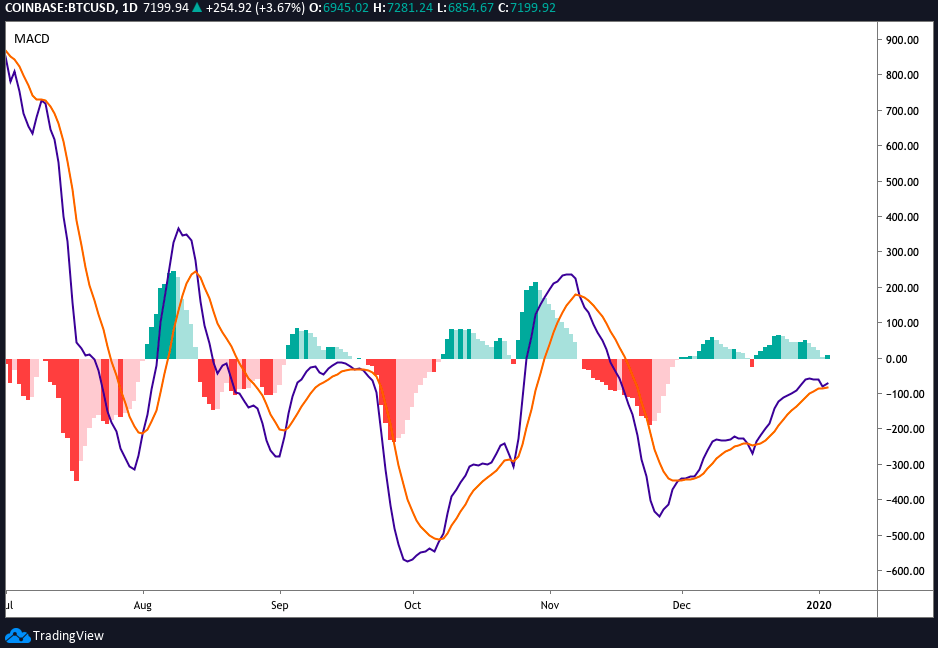 The RSI also rebounded sharply and is now at 48, near bullish territory. Furthermore, the Bollinger Bands have also continued to narrow, which is customary before a strong shift in price action.

If buyers show an appetite at the current levels, the price could rise to the upper Bollinger Band at $7,543, but ultimately, the volume will be key in this scenario.

The overall cryptocurrency market cap was $191.8 billion at press time with most of the top 10 altcoins appearing to miss out on the price action and Bitcoin’s dominance inching higher to 68.4% as a result.