The price of Bitcoin risks a continued downtrend as five metrics indicate higher chances of a short-term long squeeze.

Bitcoin (BTC) sellers are pinning their hopes on continuing to see sub-$10,000 prices in the aftermath of the halving based on five key futures market metrics.

The open interest — the total amount of long or short contracts open in the market — of Bitcoin futures contracts on BitMEX, Binance Futures, Bybit and other futures exchanges is struggling to increase.

On May 10, when the price of Bitcoin abruptly dropped from $9,570 to $8,100 on BitMEX merely hours before the halving, it liquidated around $200 million worth of longs in a single hour.

At the time, the open interest of BitMEX dropped substantially as many long contracts were either liquidated or forced to adjust their positions.

On May 14, the price of Bitcoin similarly rejected at $9,900, dropping to as low as $9,200 overnight. The rapid pullback caused $42 million to be liquidated. Within a five-day span, at least $270 million worth of longs were liquidated on BitMEX alone. 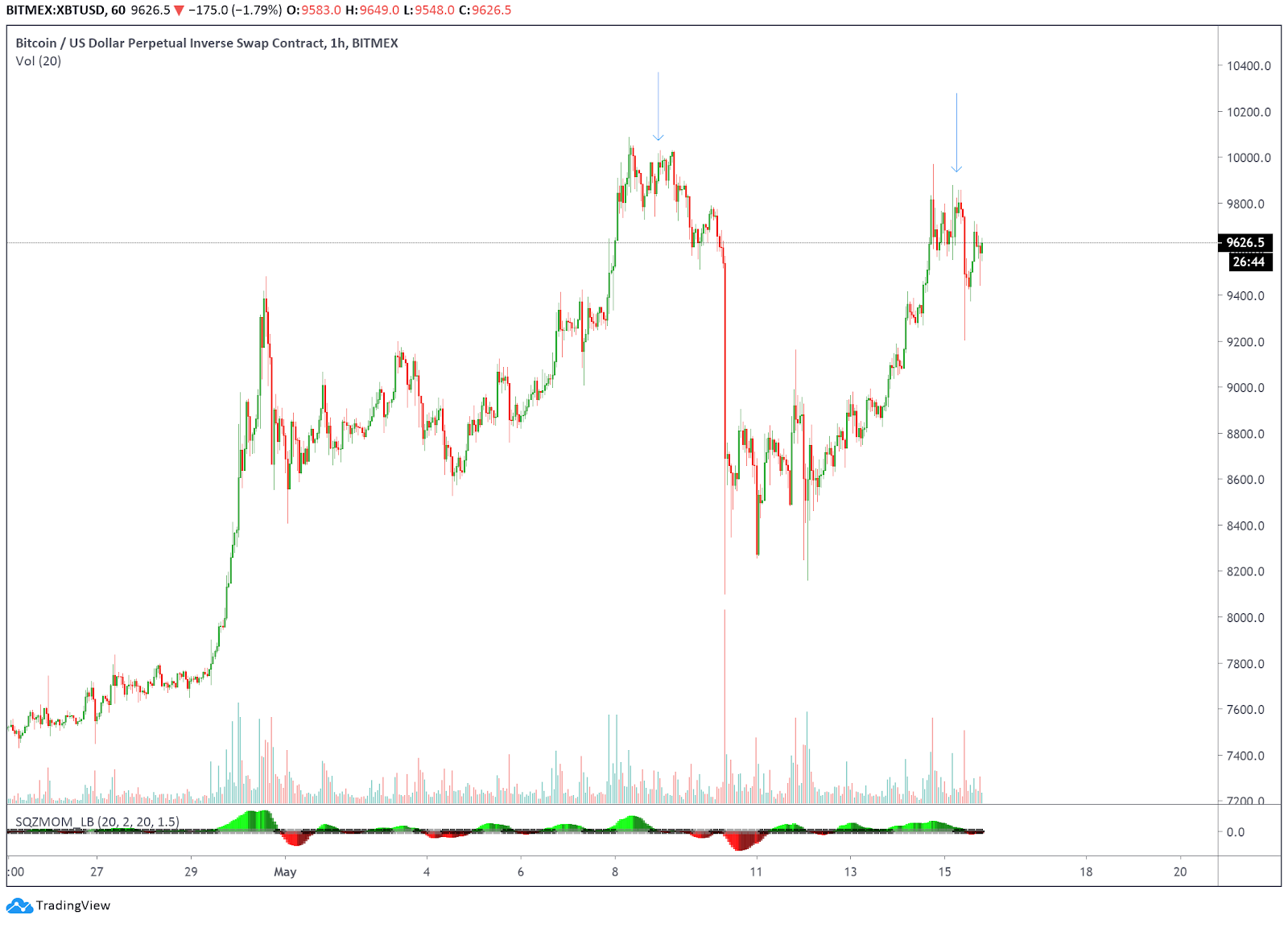 Following the two sell-offs, the appetite of investors in the futures market to enter a trade seemingly declined. It could potentially indicate that buyers are showing signs of exhaustion as selling pressure builds up at a key resistance level of $10,000.

Imbalance of long and short contracts

As of May 15, around $661.7 million worth of long positions are open but only $252 million in short positions are filed. The large gap between long and shorts at a multi-year resistance area leaves Bitcoin vulnerable to a possible long squeeze.

Total Bitcoin longs and shorts in the market. Source: Blockwhisperer

In the past week, Bitcoin experienced two major long squeezes in short time periods. Yet, the market is still heavily swayed towards longs and that means there is a lot of liquidity to be taken in the mid-$9,000s.

The Relative Strength Index (RSI) is a momentum oscillator that measures whether Bitcoin is overbought or oversold.

According to a technical analyst known as “CryptoCapo,” when the RSI of Bitcoin decreases while the price rises, it is considered to be a bearish divergence.

A bearish divergence that emerges in an extended price movement suggests that a sizable correction may occur.

The declining RSI and the slowing volume of Bitcoin in both the futures and spot markets could lead to dwindling momentum in the near-term.

For large traders, liquidity in a relatively small market is key. The price of Bitcoin typically moves in extreme cycles because whales seek liquidity at a significantly low or high price point.

When the price of Bitcoin rose from the $9,000 to $10,000 range and rejected it shortly thereafter, BTC absorbed large sell orders primarily on OKEx and BitMEX.

The absorption of sell orders at a pivotal range of resistance and two sharp rejections within a five-day span increases the probability of a continued downtrend.