Ahead of its hard fork, Bitcoin Cash sees suspicious hashing power sources cause a ruckus.

An upcoming planned hard fork in Bitcoin Cash (BCH) will impose relatively simple technical changes to its consensus mechanism that will not split the chain, despite some turbulent undercurrents in the coin’s community regarding issues which have recently become difficult to ignore. Disloyalty and perhaps manipulation among miners, or just the possibility of such, has refocused the conversation ahead of the Nov. 15 fork.

These issues have gone unaddressed in the “planned hard fork” coming tomorrow, a term which has been politicized to mean community strife and a chain split — but in this case, is something rather benign.

The minor upgrades are compatible with all miners and should enhance basic functionality for users across the chain — something that’s hard to disagree with. The only echo of dissent is heard by those who believe the recent anomalies indicate that BCH is in need of more serious repair.

Problems in both the Bitcoin (BTC) or Bitcoin Cash communities are still intertwined, years after their separation. The similarity of BCH and BTC blockchains for mining and the ease with which miners switch between them are two of the biggest issues plaguing both chains in terms of providing the best conditions for payment.

This issue is still present even as BCH itself is set for a new iteration termed Bitcoin ABC. The community is still arguably neglecting a potentially flawed Difficulty Adjustment Algorithm (DAA), updated in a widely-criticized proposal made by BCH influencers two years ago, which may be signaling to miners that the control they’ve enjoyed so far isn’t soon to be reined in.

The story so far

Bitcoin Cash has had quite a history despite its relatively short lifespan. On Aug. 1, 2017, it split from BTC via a hard fork, with one of the main reasons being a disagreement over how to adjust mining difficulty, how to best scale, and other fundamental ideas.

Both cryptocurrencies use proof-of-work (PoW) to sign new blocks of transactions, and for healthy networks, they each target a block appearance time of as low as 10 minutes on average, or 144 blocks per day.

This is why the latest DAA iteration adjusts mining difficulty after each BCH block, based on a moving window of the last 144 BCH blocks. Bitcoin, in contrast, still uses the same algorithm which adjusts the difficulty every 2016 blocks.

The point of BCH’s differing algorithm is for conditions to stay steady and predictable despite an unpredictable amount of available hashing power. However, just two years is like a century for blockchain.

Bitcoin Cash’s algorithm may have been idealist in the way it assumed an equitable and fully decentralized ecosystem in 2017, supported by individual users rather than the large mining groups and ASIC miners of today.

Some curious trends in the BCH hashrate and long gaps between blocks appear to illustrate that large miners have smelled blood in the water and may now be gaming the algorithm’s flawed method for periodically adjusting its difficulty. 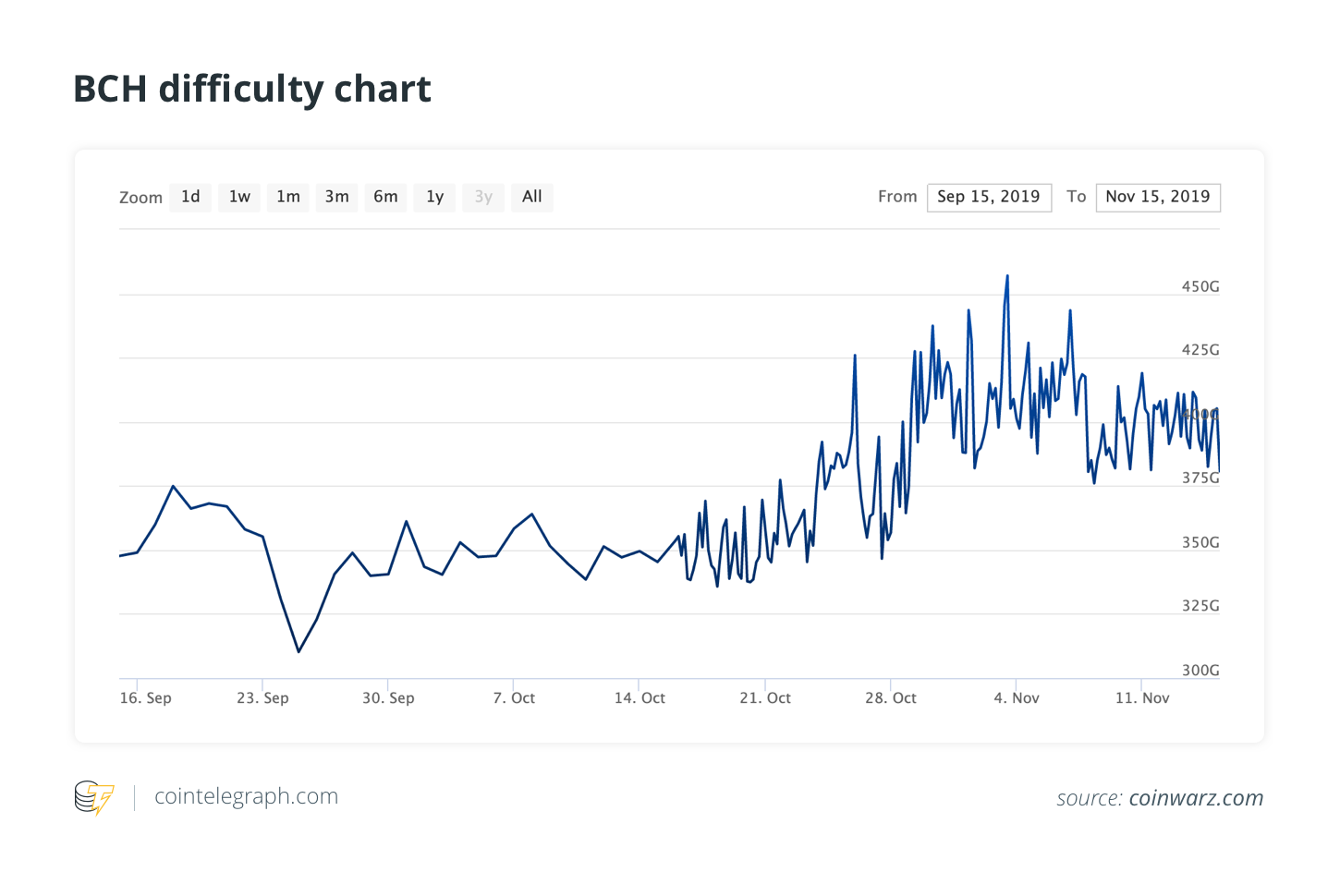 One explanation is that large, unknown mining pools that have concentrated hashing power can supposedly engage the network in measured intervals to keep the BCH difficulty relatively static while also tossing their weight around elsewhere.

The strategy entails a speedy production of 144 blocks, followed by a quick removal of their collective capacity to mine BTC, for instance, before the algorithm reacts and increases difficulty.

These stealth miners may earn up to 8% more for taking advantage of the theoretical technique, coming directly at the expense of “honorable” miners who stick with one network regardless of its profitability.

Economic problems are blameless in crypto

For now, this phenomenon is considered unconfirmed, and as some point out, the discrepancies may simply be an effect of the upcoming halving of Bitcoin Cash in 2020. One contributor noted that those with hashing power are more likely to be diversifying right now and directing their machines at BCH from BTC in anticipation of the event.

Other questions have arisen about the legitimacy behind fears over this breed of manipulation. Wouldn’t any migration of hashing power from BTC to BCH look this way on some charts, regardless of whether or not its intentions were good or bad? Can intentions even be considered “bad” if personal economic incentives are a deliberate variable in the operation of any decentralized blockchain?

Any miner who employs a blockchain-switching algorithm that’s more sophisticated than the algorithm used to adjust the difficulty of a major blockchain should be commended, some say. When numerous different coins are mined using the same hardware, it’s only logical for miners to mine the most profitable coin at any given moment, as their electricity and hardware costs require them to be opportunists where possible.

Given the unpredictable price fluctuations in the crypto market, there are no guarantees that these miners won’t lose anyway in the long term — so who’s really losing? Regardless, another potential issue is that a lot of unknown addresses are responsible for the recent trend, and some have warned that it may be the stirrings of a 51% attack.

However, the halving is just one explanation for why the incoming hashrate is natural and not malicious. The miners intentionally use a different Coinbase text on transactions, inflating the relative amount of hashrate attributed to different unknown entities, and they’ve been coming to both BTC and BCH networks predictably since 2018.

Cybersecurity expert and founder of the HyperSphere decentralized cloud solution, Evgen Verzun, agrees with this sentiment and played down the fears of an attack. He noted in a conversation with Cointelegraph:

“System-wide hash rates which suffer drastically from a coordinated attack are already not considered decentralized, and therefore have always been vulnerable to a 51% attack. These attacks target pools, computers, or nodes instead, and aim to create profitable network conditions, yet no single culprit in this case has gained revenue.”

The problem isn’t that miners are behaving rationally by switching between chains, that they’re planning some sort of attack, or that the algorithm is erroneously accounting for environmental factors — it could simply be that the two blockchains have never truly disincentivized miners from swapping.

Instituted software changes that require accompanying adjustments in hardware (like a BCH-specific miner), might be a harsh solution that stifles hash power for BCH, but it might also work out better than trying to usurp Bitcoin’s throne.

Coexistence is a burden on both cryptocurrencies. Therefore, while there isn’t any relevant change scheduled for the upcoming ABC upgrade, the two networks could — and perhaps should — continue to exist in a sort of a tandem. Verzun, however, told Cointelegraph that the two cryptocurrencies are not on the same terms in this relationship:

Verzun went on to say that due to the rules of the blockchain, the network is controlled by the miners who hold the majority, but they cannot remain anonymous forever. Therefore, if the identity of the miner is truly unknown, then it will no longer be possible to change the rules that regulate mining difficulty or block appearance time, since it would be difficult to start a conversation or reach a consensus. Verzun concluded:

“In this case, BCH ABC should increase the hash rate of their miners to get the decision-making power back inside the network or reach an agreement with big mining pools.”