Bitcoin Has Barely Reached 1% of its Potential: Expert Blog

Vincent Launay is a finance specialist at the World Bank in Washington DC. He holds an MSc in Finance from HEC Paris and a CFA charter. The views and interpretations in this article are his own and do not necessarily represent the views of the World Bank or Cointelegraph.

“- I will have one Big Mac, large French fries and a Diet Coke please

Will there ever be such an exchange or is this just science fiction? In this hypothetical world, 1 Bitcoin is worth $1,000,000, 1 bit is worth $1.00 (1 millionth of a Bitcoin) and 1 Satoshi is worth 1 US Cent. There is no consensus on what the value of one Bitcoin is or should be. The spectrum of opinions ranges from Jamie Dimon, CEO of JP Morgan, who thinks it is a fraud and therefore worthless, to Bitcoin maximalists who believe that the sky's the limit. Somewhere in the middle of that, Mohamed El-Erian recently said that “The current prices [of Bitcoin] assume massive adoption, which is not going to happen." He went on to say that Bitcoin should only be worth “a third” of its value at the time - $4,000. Mohamed El-Erian is a smart guy, he is the former billionaire CEO of PIMCO and former IMF economist, could he be right? Has Bitcoin already peaked?

Unlike other cryptocurrencies that may have more sophisticated uses, like smart contracts for Ethereum, Bitcoin’s main uses are being a store of value and a medium of exchange. Its competitors are therefore the established main fiat currencies (US Dollar, Euro, Yen) and Gold. If the Bitcoin price already assumed massive adoption, the market capitalization of all Bitcoins should be close to that of the US Dollar and Gold, right? It turns out that nothing could be further from reality. While the market capitalization of Bitcoin is currently $90 bln, the money supply of the US Dollar, i.e. M2, cash, deposits and money market funds, is $12,500 bln while the value of all the gold ever mined is close to $8,000 bln. This means that Bitcoin is only worth around 1% of the value of its two main competitors. I am not sure this would qualify as “massive adoption”, so I guess I have to respectfully disagree with Mr El-Erian on this one.

For the Bitcoin price to assume massive adoption, its price should increase... a lot! The following charts illustrates what it would mean for Bitcoin to reach a market capitalization of $1 trillion ($1,000 bln) and for the price of a single Bitcoin to reach $1,000,000. 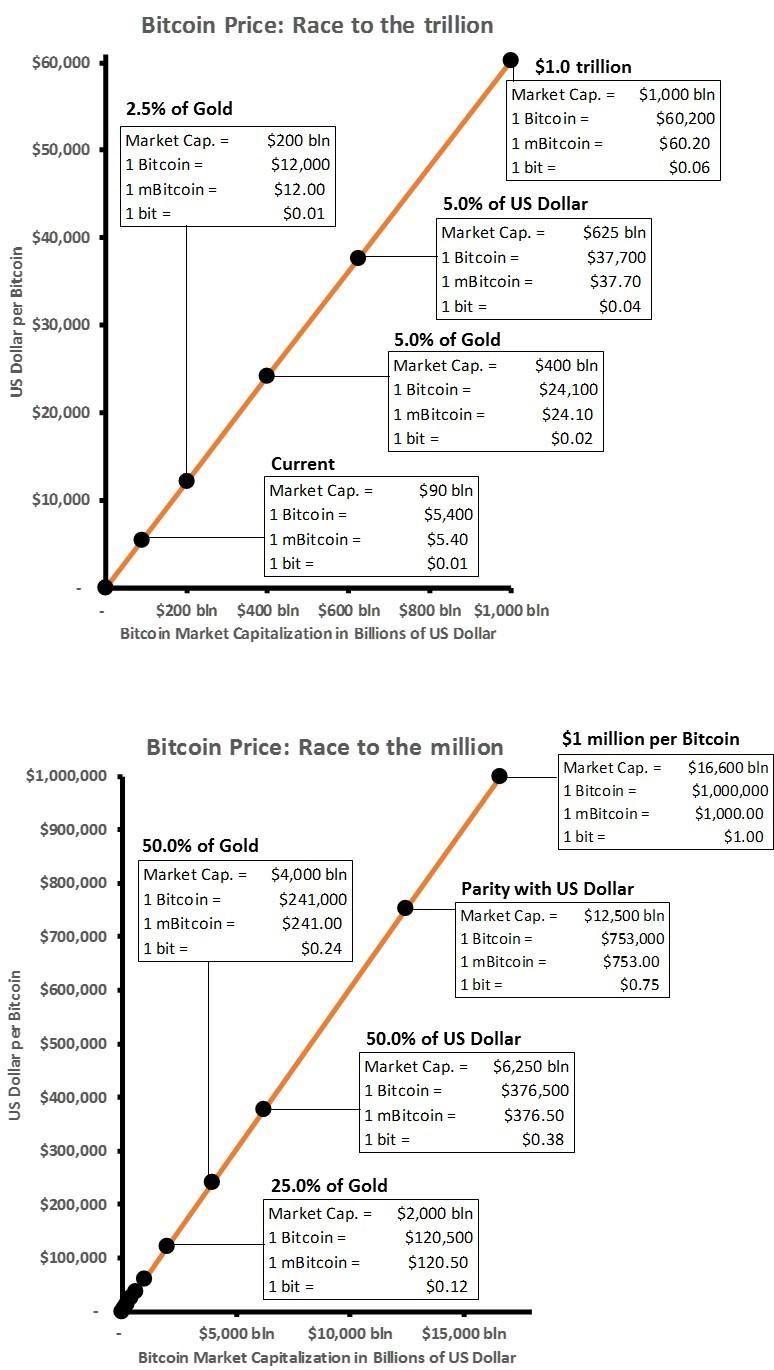 This illustration assumes that 16.5 million Bitcoins, the number of Bitcoins mined to date, are available. In reality, the pool of Bitcoins available is most likely much smaller. Hundreds of thousands or even millions of Bitcoins may have been lost in the early years, at a time when Bitcoins were basically worthless. Satoshi Nakamoto - Bitcoin’s enigmatic founder - never moved any of his one million Bitcoins (now worth more than $5 bln). So either he is the greatest hodler ever, or he disappeared and his private keys are gone with him.

The head of the IMF said two weeks ago to a room full of Central Bankers that they should not “dismiss” cryptocurrencies as they may very well give Central Banks “a run for their money”. If this is indeed the case, then forget the price of one Bitcoin, the number that everyone will be quoting very soon will be the price of one bit.