What If US Dollar Was Just Another Cryptocurrency? Expert Blog

An expert opinion on how a US dollar white paper would look like.

Jamie Dimon, CEO of JP Morgan, recently attacked Bitcoin, going as far as calling it a "fraud" that will be "shut down." A lot has been written about his comments, so I will not go down this road. But it is true that cryptocurrencies, in general, suffer from a bad reputation from the public. This is mostly due to a lack of understanding of the mechanics of cryptocurrencies and the confusion between exchange hacks, which happened, and the robustness of the Blockchain itself, which cannot be hacked with existing technologies. But what if we looked at the world's most powerful currency with the same critical angle as that of the cryptocurrency opponents? What would the white paper of the US Dollar look like? Let's have a look.

The US Dollar is the most widely accepted form of payment in the world. Its role as a reserve currency for central banks around the world has made it the undisputed #1 currency since World War II. You can travel to any place in the world and exchange your US Dollars for local currency. It is a great medium of exchange.

Ever since the US abandoned the gold standard in 1971, the US Dollar has lost more than 80 percent of its value as measured by the loss of purchasing power caused by inflation. In the short term the US Dollar is very stable with a two to three percent annual inflation rate, but in the long term, it is guaranteed to lose most of its value. Unlike for cryptocurrencies, no algorithm determines the pace at which new tokens, US Dollars, are created either electronically or by printing dollar bills. The creation of new tokens is at the sole discretion of the Board of Governors of the US Federal Reserve. Since 2008, in response to the financial crisis, the Fed created $4,500 bln out of thin air with only one objective: buy US Government debt and other mortgage-backed securities. Since 2008, the M2 money supply of US Dollars--which comprises cash and deposits-- increased from $7,500 bln to $13,500 bln or a 92 percent increase. 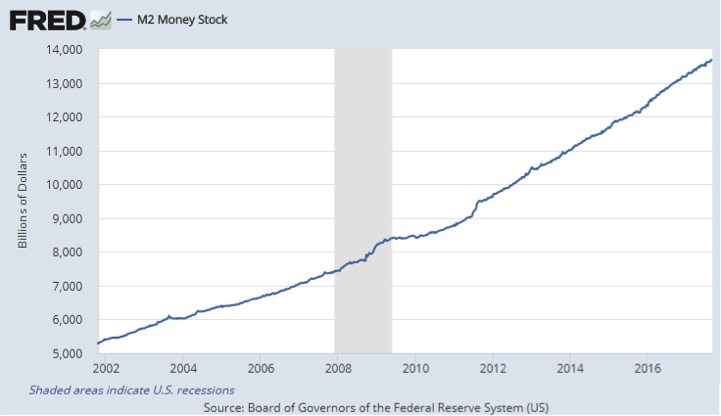 Just like any fiat currency, the US Dollar is not convertible into a fixed amount of gold like it used to be. It is backed by the "faith and credit of the US Government," which has no meaning in monetary terms. It means the US Government will give you one US Dollar if you want to exchange one US Dollar. It is an "I Owe You" issued by the Federal Reserve that does not pay any interest, that never matures and whose value keeps being diluted by the creation of more and more US Dollars. The International Monetary Fund summarized it very well in a report published in January 2016.

Ease of transfer and ownership: limited

Not everyone can have a US Dollar bank account. You either have to be an American or have the means to have a US Dollar bank account in your home country. In addition, all US Dollar transactions have to be cleared in the US. This way the US Government decides who is allowed to use US Dollars and who is not. BNP Paribas - France's largest bank - learned it the hard way when it was fined $8.9 bln in 2014 by the US Department of Justice for doing business with Sudan, Cuba and Iran in US Dollar while these countries were under US sanctions. Had the transactions been done in any other currency, BNP Paribas would have been fine, or at least with the US Department of Justice.

For small transactions, merchants have to use an intermediary such as Visa or MasterCard that charge three to five percent of the transaction value. Wire transfers take days to clear unless you are ready to pay extra, in this case, it can take "only" one day.

Ability to control of your funds: close to nonexistent

You only control the paper money that is in your physical wallet or under your mattress. The funds in your bank account are under the control of the banks. All you have is an "I Owe You" from the bank to you. You have to trust that the bank will give you your money back when you need it. If the bank goes bust, you lose your money. The US Government guarantees up to $250,000 of deposits per person per bank, but this mechanism is unfunded, so nobody knows if it would really work in the event of the collapse of a large commercial bank.

There are more than 100 other fiat currencies in the world - Euro, Yen, Yuan but also Venezuelan Bolivar, Nigerian Naira, etc. Most of them have a horrendous track record, high to hyperinflation, and most have been replaced time after time when the previous currencies failed. Fiat currencies usually fail or lose more than 90 percent of their value within a generation or two. The US Dollar is an outlier as it has been around for more than a century and has lost only 82 percent of its value since 1971, which makes it one of the best performers among the rest of fiat currencies.

If this was the white paper of a brand-new cryptocurrency, would you invest in it?

*The views and interpretations in this article are those of the author and do not necessarily represent the views of the World Bank and Cointelegraph.