The Bitcoin network hash rate has just taken a steep plummet, and is now down almost 45% from its 2020 peak.

The Bitcoin (BTC) network hash rate has just taken a steep plummet and is now down almost 45% from its 2020 peak.

The network’s hash rate sank from 136.2 quintillion hashes per second (EH/s) on March 1 to 75.7 EH/s today, March 26, according to data from Blockchain.com. 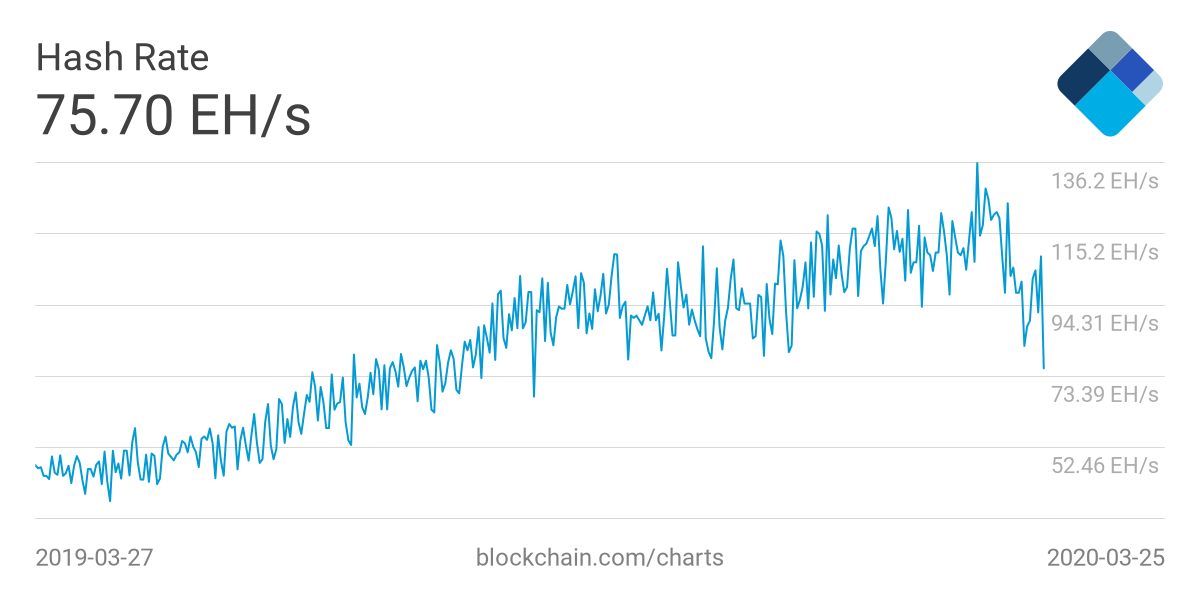 The hash rate of a cryptocurrency is a parameter that gives the measure of the number of calculations that a given network can perform each second.

A higher hash rate means greater competition among miners to validate new blocks; it also increases the number of resources needed for performing a 51% attack, making the network more secure.

After a volatile month in which Bitcoin saw dramatic, if short-lived, losses of as high as 60% to around $3,600 in mid-March, the network’s difficulty yesterday decreased by close to 16%.

Difficulty — or how challenging it is computationally to solve and validate a block on the blockchain — is set to adjust every 2016 blocks, or two weeks, in order to maintain a consistent ~10-minute block verification time.

This has a close connection to the network’s hash rate. Typically, when the network sees a low level of participating mining power, the difficulty will tumble — while in periods of intense network participation, it rises, working as a counterbalancing mechanism.

Theis relationship between price, hash rate, and difficulty has historically generated a trend that some analysts refer to as a “miners’ capitulation cycle.”

The theory holds that while Bitcoin’s price remains high, and mining is profitable, both hash rate and difficulty inch upwards until they reach a threshold at which miners are squeezed and forced to liquidate more and more of their holdings to cover their expenses — leading to an increased supply of Bitcoin on the market.

The “capitulation point” — at which some can no longer afford to keep mining altogether — then involves a decline in hash rate (reflecting lower participation) — as can be seen today —  and a subsequent reset in the network’s difficulty.

According to data from btc.com, Bitcoin’s difficulty is currently forecast to decrease by a further 16% in 14 days’ time.