Bitcoin Price Diary: Long BTC From $6.5K and Back in Altcoin Positions

Bitcoin’s swift drop to $6,450 provided a great opportunity to open a long position and numerous altcoins are producing double-digit rebounds after this week’s carnage.

It has been a profitable week, largely because I caught the big Bitcoin (BTC) move up from the local bottom. I closed a majority of my altcoin trades, some on tight stops and others at a decent profit.

Overall, I’m very happy with the results, although as I mentioned last week, I failed to take profit on certain alt trades when I had the chance and ended up with smaller gains or exiting near even. I have recently opened new positions again in FunFair (FUN) and EtherParty (FUEL) while closing the majority of my IOST (IOST) position for a 12% gain.

I was long Bitcoin from $7,100, as discussed in my previous journal. When price moved up, I raised my stop-loss, which eventually hit at $7,060 — I was very happy to stop out at a small loss when I saw the price drop to the mid $6,000s. I was eyeing the $6,500 area for another long for days and opened a position when price arrived there, with an average entry of $6,550.

Bitcoin price was showing potential bullish divergences on every time frame below the weekly with oversold conditions on the Relative Strength Index (RSI) on the daily time frame and on shorter timeframes.

There were also potential Swing Failure Patterns (SFP) below the two previous swing lows (blue lines). This is a good indication that liquidity was engineered below these lines — likely an area where a number of people had their stop-losses set or had limit orders to go short.

This is also known as a “stop hunt.” When someone is looking to fill a large number of bids, they need to find those areas where there are likely a lot of sitting orders.

As shown on the daily chart above, I had planned this idea a few weeks back (the top part didn't quite happen). As mentioned before, my plan was always to go long if we got to the bottom line at $6,524. Volume had decreased on each pushdown, which can signal weakness for bears. If the price is going down on diminished volume, it is often a sign of a looming reversal.

The weekly chart showed the massive descending channel (debatable bull flag) still intact, with a nice bounce off of the bottom. This coincided with a touch of the 70.5 retracement, known as the optimal trade entry (OTE) for institutional traders, and also amounted to price dropping below the famed “golden pocket” around the 61.8% retracement. For me, all of this was enough confluence to enter a long position.

Most importantly, at the time, the Crypto Fear and Greed index showed “extreme fear” and sentiment was exceptionally bearish.

How did it work out?

I have raised my stops on the remainder of my position to below the green zone pictured below and I will continue to raise them as a manual trailing stop if the price continues to rise. Ultimately, I believe this is another great long during a downtrend. 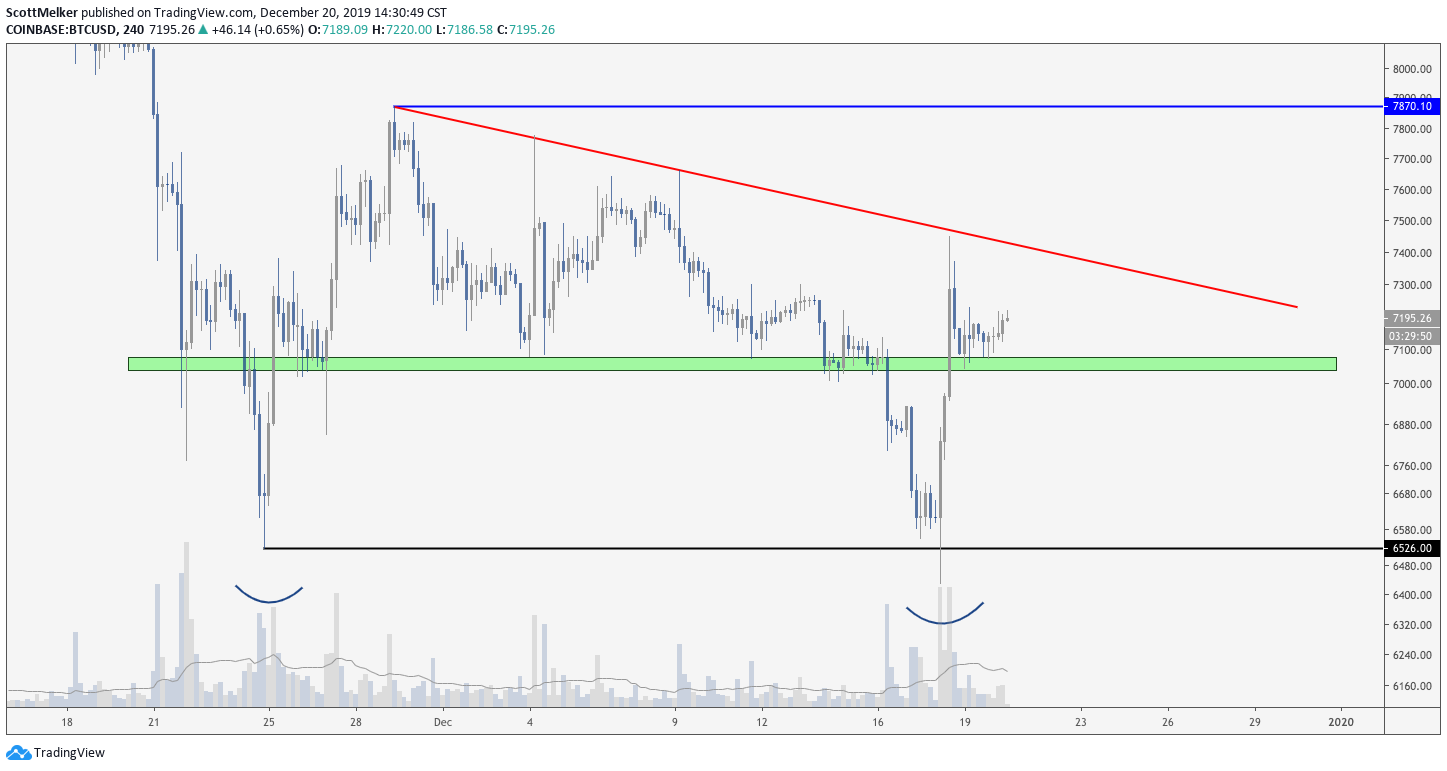 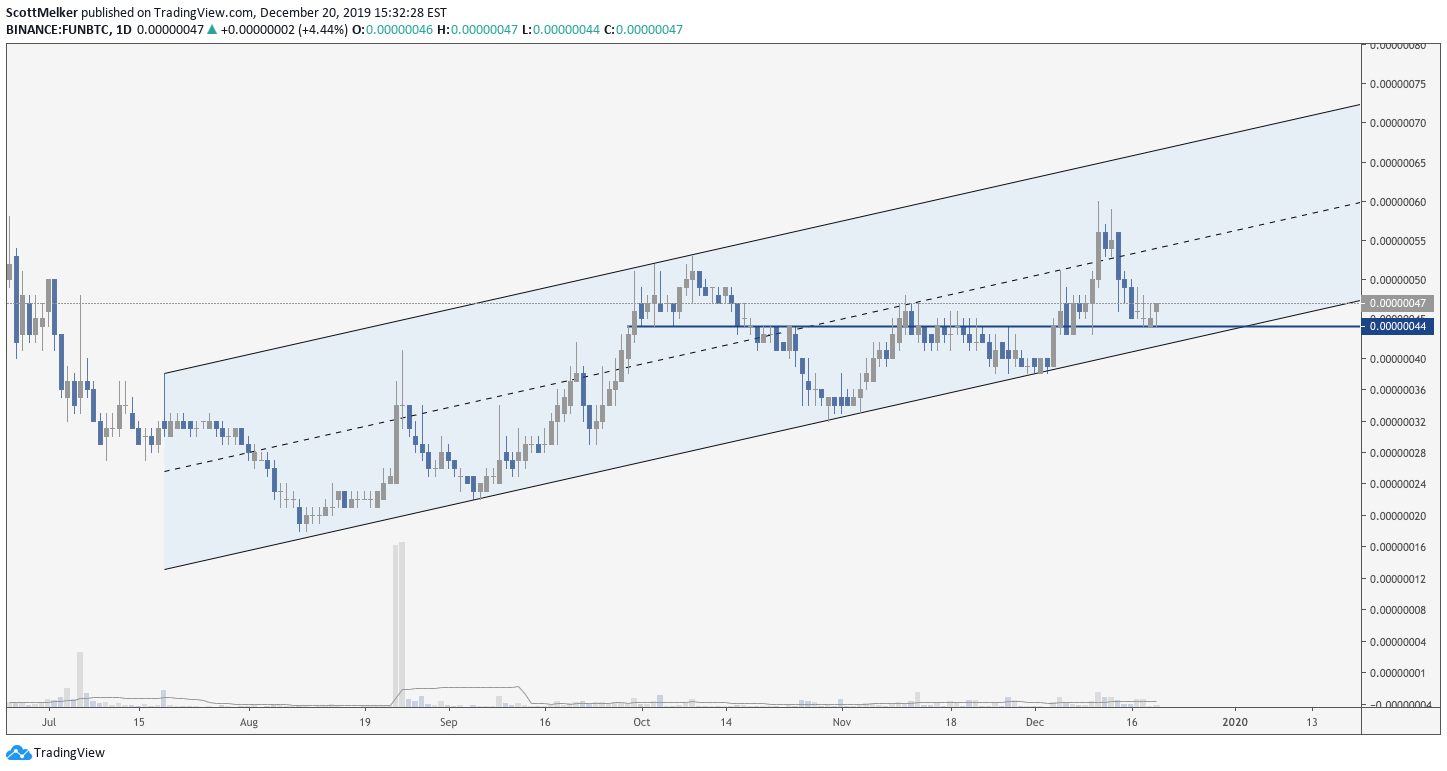 I have once again taken a position in FunFair (FUN) at 0.00000044 (sats), which is a repeat of last week’s profitable trade. The price held the key support line and continues to move within an ascending channel.

These types of setups are among my favorites because I can justify raising my stop-loss with the channel as price goes my way. My stop-losses are set below the blue channel. 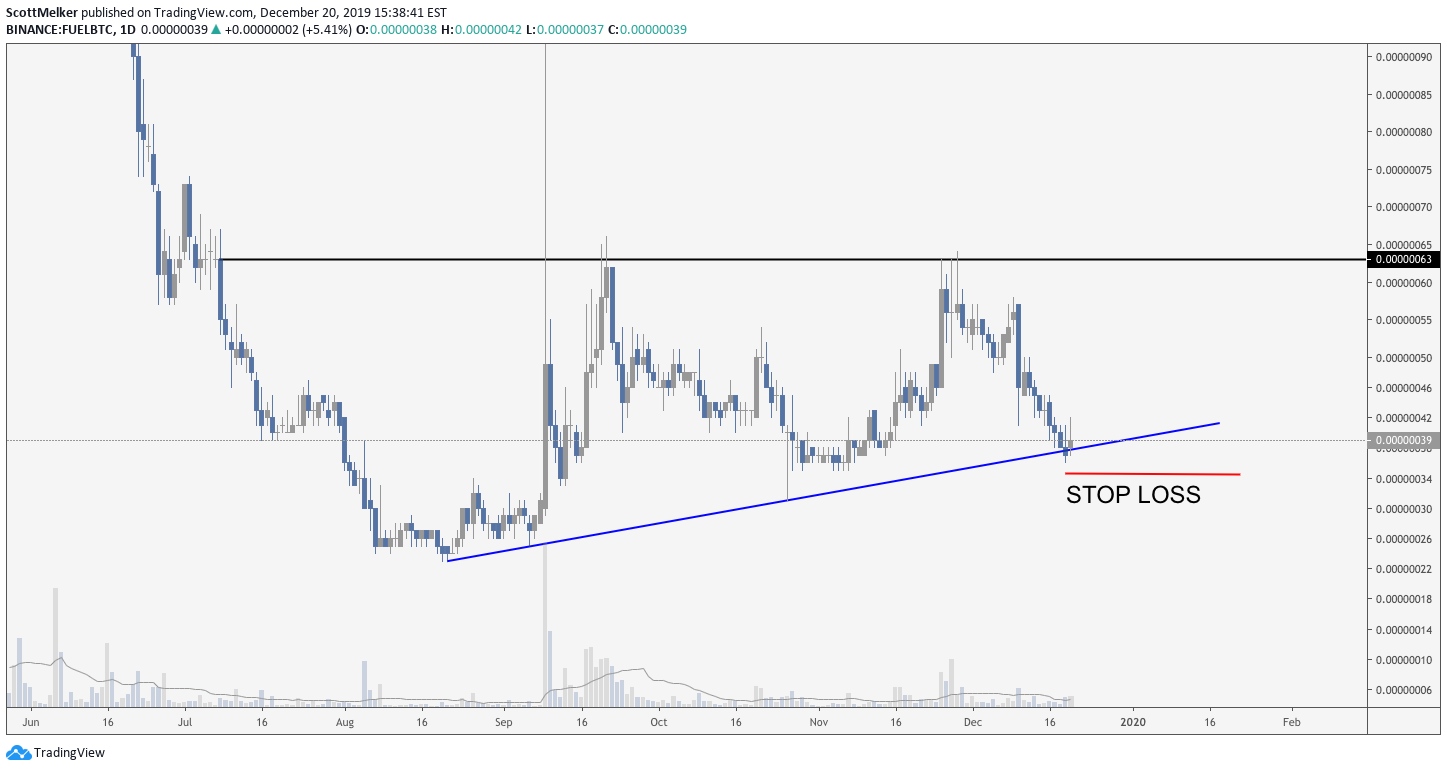 I stopped out of Etherparty (FUEL) even last week but was looking for another potential entry on a bounce off of the blue support line. That happened and I was able to take a position at 0.00000038 (sats).