Bitcoin price retraced gains from earlier this week as President Trump announced that no further military action will be taken against Iran for the time being.

Over the last few hours, the price of Bitcoin (BTC) began to falter at $8,300 and dropped all the way to the support at $8,000 as United States President Donald Trump stated that he would not seek further military action against Iran following Tuesday night’s bombing of two air bases in Iraq.

The 4.82% pullback suggests that speculators looking for Bitcoin price to rally higher on the increasing chances of war with Iran decided to either pull their bids or take profit as Bitcoin struggled to hold $8,300.

It should also be noted that since Jan. 6 Bitcoin price has rallied more than 15% for a $1,100 gain so swing and day traders could also be taking profits. 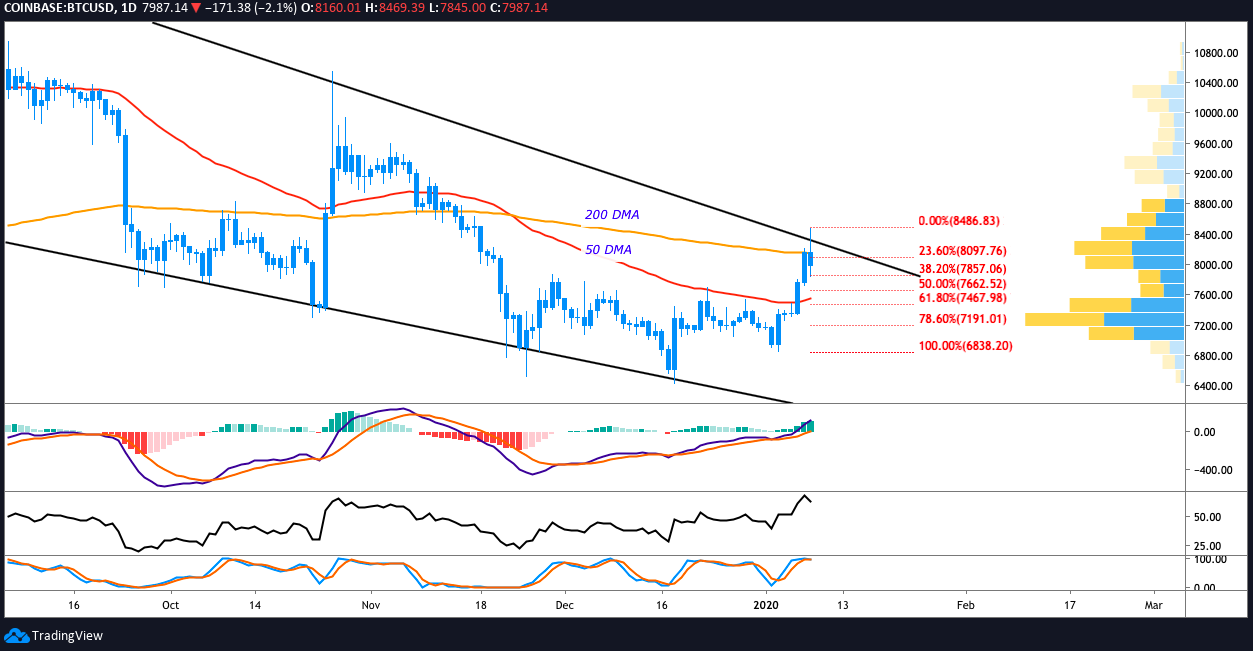 Regarding Bitcoin’s immediate price action, there are a few factors to consider. Traders were looking for $8,300 to hold as support after giving way as resistance. It was clear that this would be an area of contention as $8,300 lines up with the main trendline of the long-term descending channel, a point which has been a major zone of resistance for months.

In the event that $8,300 failed to provide support, investors then looked to $8,130 as it is aligned with the 200-day moving average (200 DMA) and a high volume node on the volume profile visible range (VPVR) indicator. 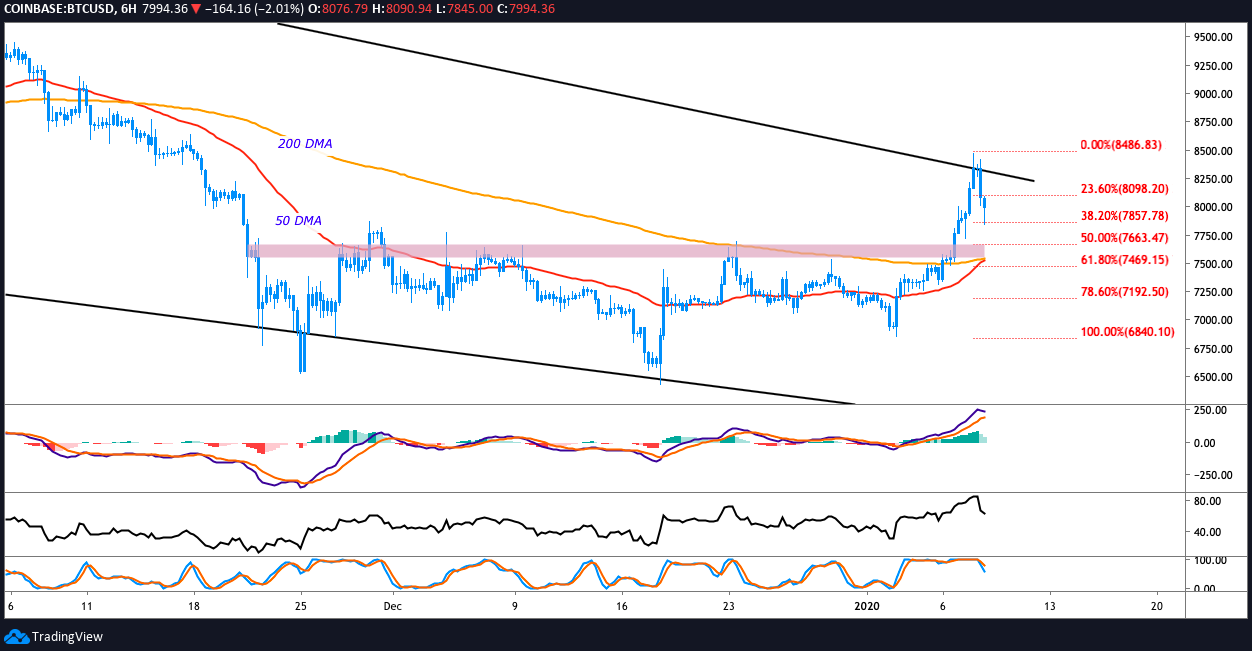 As this update is being written, Bitcoin’s price continues to pull closer to $8,000 and bulls are attempting to hold the 200-DMA. Aside from President Trump’s relatively tame comments on Iran, the current rally was running out of gas as shown by the overbought position of the relative strength index (RSI) on the 6-hour chart.

Furthermore, the moving average convergence divergence (MACD) indicator also suggests that bulls were running out of steam and the spinning top candlestick following the local high at $8,478 was also a sign that a pullback was in the works.

Meanwhile, those who rely on the Bollinger Bands indicator know that Bitcoin price tends to almost predictably bounce between the lower band, middle moving average, and the top band as rallies and corrections occur. 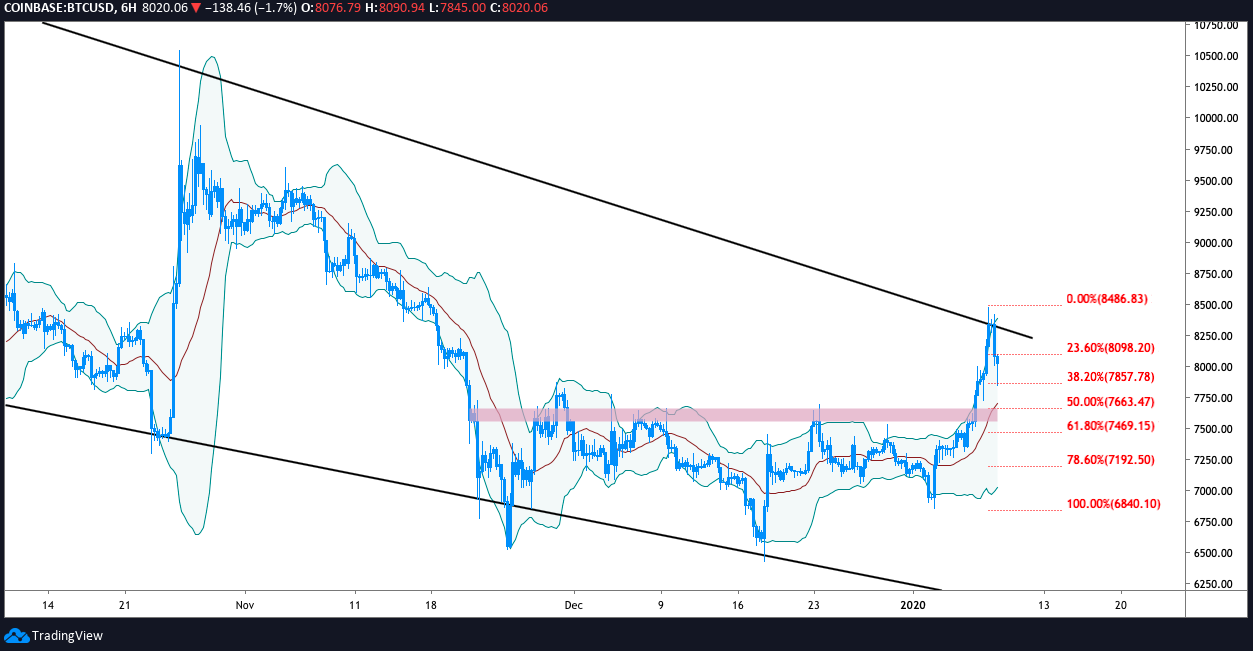 Currently, the Bollinger Band MA is lined up with $7,660 (the 50% Fibonacci retracement) so if the price drops below $7,800 and fails to bounce buyers may look to open positions starting at $7,660.

The 1 and 4-hour timeframe show Bitcoin price holding above the 50-MA and it is important for the digital asset to retake $8,116 over the short-term. A 4-hour close above this point would be an encouraging sign and would also strengthen the change of bulls looking to have another go at $8,300.

The overall cryptocurrency market cap pulled back slightly to around $214 billion as Bitcoin’s dominance holds at 69.1%. As President Trump spoke, oil prices also dropped with Brent Crude falling 3.7% from a recent high of $71.75 and the S&P 500 rose by 0.7% to reach an intraday high.