Bitcoin Shows Extreme Volatility After $10,600 Spike — Where to Next?

As the Bitcoin price shows volatility unseen since June, traders anticipate a large move to occur after monthly close on Nov. 1.

The Bitcoin price has been showing a high level of volatility following its abrupt increase to $10,600 on Oct. 26, when Bitcoin (BTC) climbed by 43% against the United States dollar on a single day.

According to Skew Markets, Bitcoin has been more volatile than other major cryptocurrencies like Ethereum in the past week, which does not tend to happen due to the discrepancy in liquidity between BTC and alternative cryptocurrencies. The volatility of Bitcoin’s marked increase following a six-month low indicates that investors remain divided on the potential short-term trend of Bitcoin.

Given the stability of Bitcoin subsequent to achieving $10,600 in late October, some technical analysts favor a bullish scenario in which the Bitcoin price avoids a re-entry into the mid-$8,000 support level and looks to break out above $10,000. However, other traders still anticipate a deeper pullback, considering the entire run up to $10,600 to be a stop hunt, trapping long contracts across margin trading platforms and futures markets.

The bull scenario: clean recovery over $10,000 for Bitcoin

Based on historical data that shows a significant spike in volatility before and after the closure of a monthly candle, traders are anticipating that the Bitcoin price might test the $10,000 resistance level once again in the short term, TurtouseTraiding said on twitter:

“BTC Tomorrow is the day where the relative time period to the 2018 bottom ends. We already had a massive rise in price but bulls aren't out of the woods yet. Tomorrow is also the monthly close. Expecting a big move on BTC.”

Josh Rager, cryptocurrency trader and technical analyst, similarly said that if the Bitcoin price is able to reclaim the mid-$9,000 region, it will likely lead the dominant cryptocurrency back above the $10,000 mark, an area considered as an important psychological level by investors, “Daily support below, while overhead is the weekly and monthly open (resistance) with a break and close above these areas on higher time frames will likely be a signal to move up in the $10ks.”

Scott Melker, a trader at Texas West Capital, described the current price action of Bitcoin as a largely bullish trend, based on its rebound from sub-$9,000, “This looks massively bullish to me. Price has broken out of the descending channel and is consolidating with the former resistance as support. Still long from $8.985.”

One potential positive factor for Bitcoin that could contribute to a short-term trend reversal to the upside is the increase in the daily volume of BTC on BitMEX, the most widely utilized cryptocurrency margin trading platform. BitMEX liquidations for Bitcoin and other major cryptocurrencies in the past year reached $21 billion: 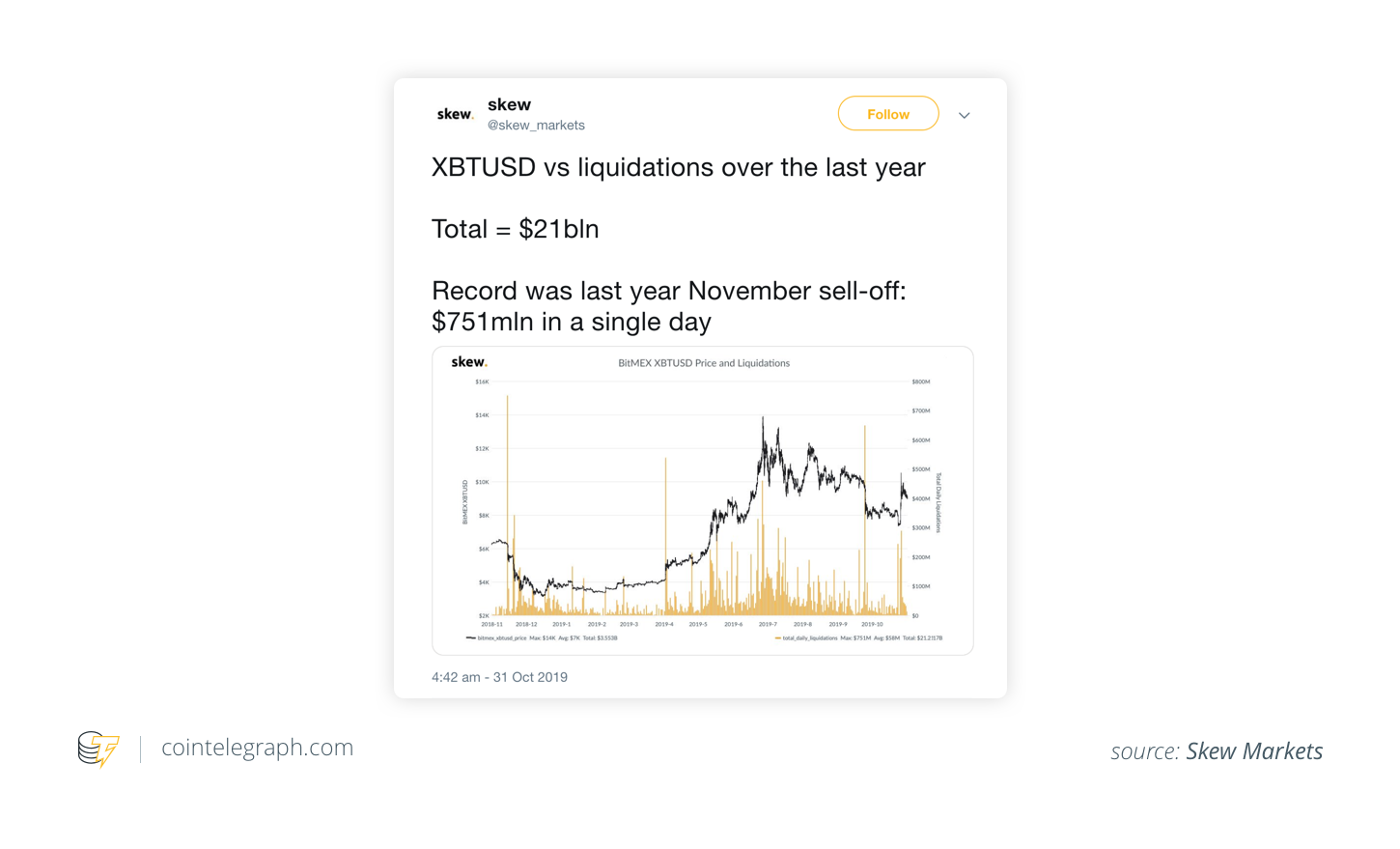 Throughout October, when the Bitcoin price portrayed signs of stagnation with a low level of volatility, the asset’s trading volume on BitMEX was hovering at around $1 billion to $1.5 billion, near to the levels seen in March 2019. The daily trading volume of Bitcoin then dropped below $1 billion on Oct. 12, down substantially since June when Bitcoin price hit a yearly high at $13,920.

Bitcoin’s trading volume on BitMEX is an important indicator for trading sentiment, as the exchange tends to see a mass cascade of long or short liquidations that trigger a big price movement to either the upside or downside.

The bear scenario: a bigger pullback based on fractal

A technical analyst and trader known to the cryptocurrency community as “Dave the Wave” has long emphasized the bear trend of Bitcoin since mid-2019, ever since the asset started to fall off from its spike to $13,920.

If the Bitcoin price is following a fractal, the analyst said that a drop to the $6,000–$7,000 range is likely in the short to medium term, adding that BTC has fallen back into the downside trend after its rise to $10,600. The analyst also noted that it is difficult for a two-day spike to dismantle months of BTC’s price action, suggesting that the abrupt surge to over $10,000 on Oct. 26 has not changed the course of the asset, adding:

“Was always unlikely for a multi-month trend to be broken on the basis of a two day spike. Has retraced near 50% already.”

Rager also explained that for the bullish structure of Bitcoin to hold, it will need to defend the $9,000 support level with strength and avoid a drop below $8,800. A bearish trend for Bitcoin could materialize if the asset falls in spite of the monthly candle close, which has historically been a period controlled by bulls.

Binance, one of the largest cryptocurrency exchanges, has begun to support the Russian ruble on the platform, as the company is now targeting the Russian market. This is happening on the backdrop of Russia and China — with ambiguous regulatory frameworks surrounding cryptocurrencies — beginning to see progress in developing regulations that may later play as macro factors for the price trend of Bitcoin and other cryptocurrencies.

However, cryptocurrency trading still remains prohibited in China, and the People’s Bank of China — the nation’s central bank — has no intention to publicly allow digital asset trading in the near future. Despite this, Bitcoin in China has good local liquidity, according to Primitive Crypto founder Dovey Wanshe:

“For fiat buyers, all the Chinese exchanges operate big OTC, Huobi OTC volume is around a few hundred millions of $ every day on a conservative side Local liquidity of Bitcoin in China is EXTREMELY good.”

With Bitcoin showing a high level of volatility — which it normally does not demonstrate — and potentially large markets for the asset opening up to blockchain technology, macro factors could add to the upside movement of BTC if it breaks out upon its monthly open.