Too many crypto traders lose money the majority of the time. Keeping a trading journal can help investors make better trades and more profit.

This is the second installment of my trade journal, which includes completed trades on large-cap altcoins XRP and Ether. I’ve found that crypto investors are always curious about each other's positions and typically these conversations take place in private DMs and telegram chats.

The goal here is to provide some transparency on my trading routine and I hope traders find the process of observing each step of every trade educational. Trading position sizes have been redacted, but they are always calculated based on a 1% portfolio loss using the stop loss and entry as a guide.

Targets: I set my first target at .00002933 (sats) which is the first resistance I have identified for a 6% gain. My second target is at .00003085 (sats) which is near the second resistance at .00003297 (sats) and provides an 11.4% gain. I’ve set this target near the main resistance on the chart as this is an area where the price previously had a major breakdown. My sell order is below it just in case shorts front-run the line. In total, this would be a 19% gain on my XRP/BTC position.

Comparing these two provides the ratio of profit to loss, or reward to risk. For this trade, it is roughly 2.08 at the first target, 4 at the second target and 6.7 at the final target.

XRP has been in a sustained downtrend for months, which I have been publicly sharing on Twitter and watching intently. The price has flipped multiple levels of support into resistance on the way down and the first sign of a potential bottom for me is a bullish divergence. One finally appeared on both the daily and weekly timeframe (charts pictured below) around Sept. 6th. 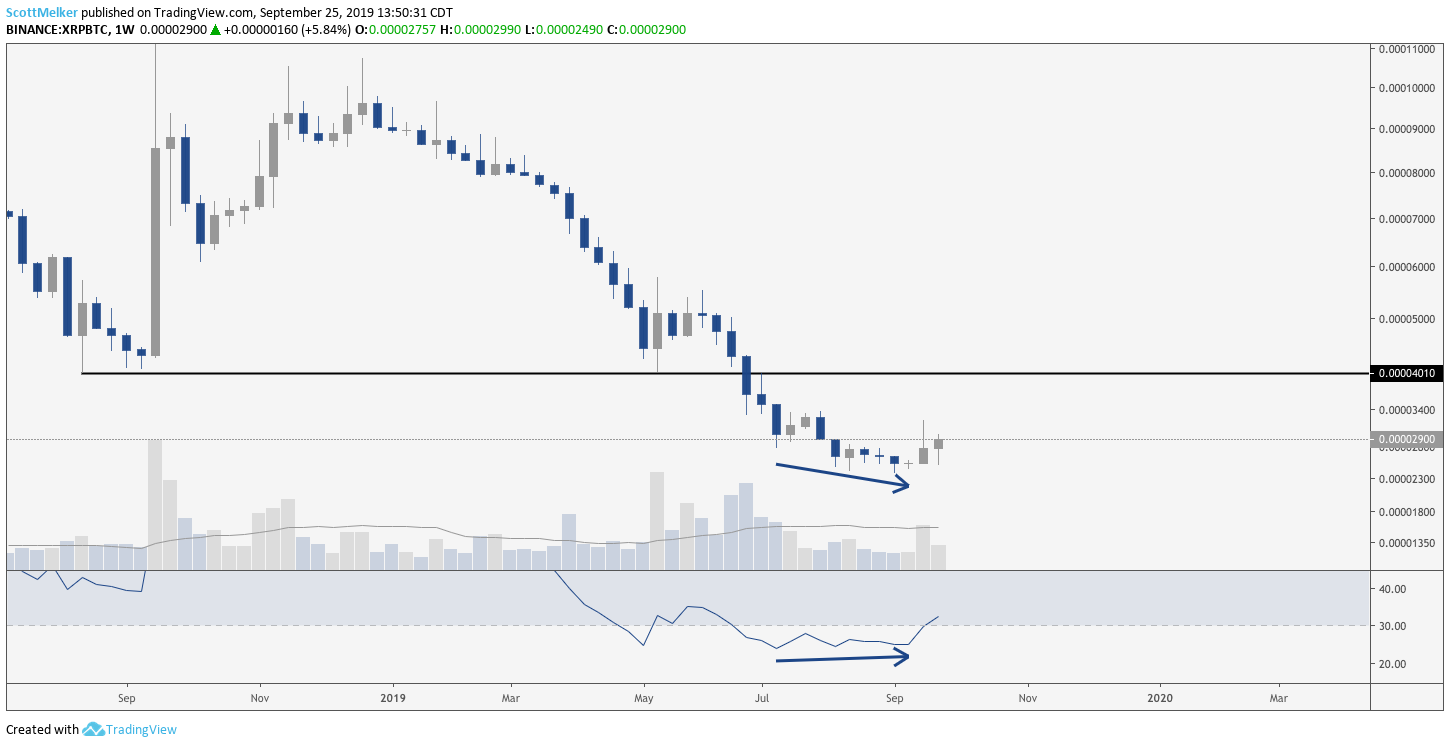 I identified .00002769 (sats) as a fresh area of resistance that was created on the XRP drop. My plan was to wait until this line flipped from resistance to support before entering a trade, as I prefer trading on confirmations. XRP price broke through this area violently on Sept. 17 and continued up for another day before violently falling when Bitcoin sharply corrected.

At this point, my alarm went off again at .00002769 (sats) on the support retest, but the price dumped through with force as Bitcoin continued to correct. XRP bounced back very quickly, leaving a long wick below. At this point, I was confident to enter a trade and took the breakout back above resistance on the following candle.

There were three short term targets that I was interested in, which are listed above. The first two were areas of resistance that were left behind when the price dumped. The third was slightly below the key resistance on the chart (top black line). I chose to set my sell orders slightly below this point because shorts often front-run key areas and I wanted to be sure that my orders fill. 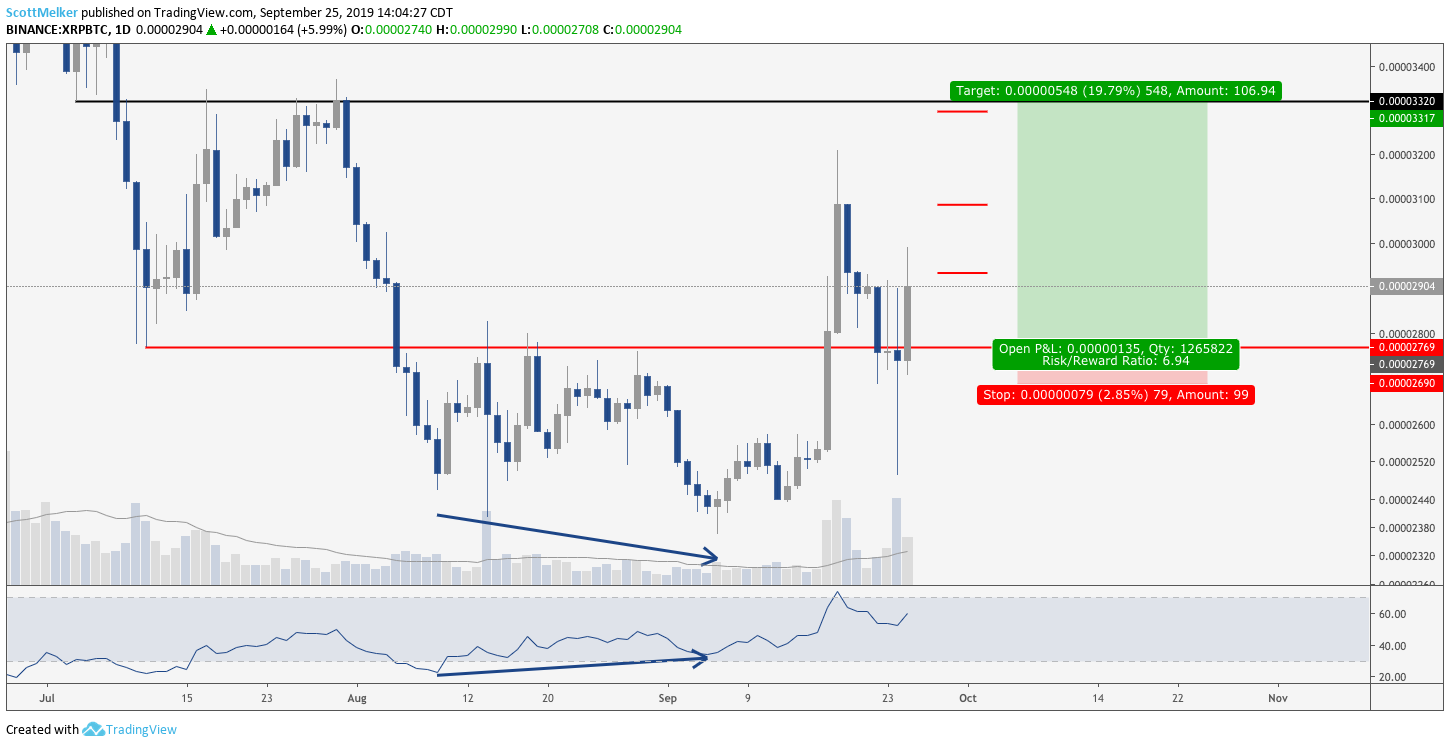 The first target was hit quickly and I chose not to close the trade in order to see if the area held as support, which it did. I set a limit sell order at the second target (.00003085 sats) for half of my position, which fired not long after. 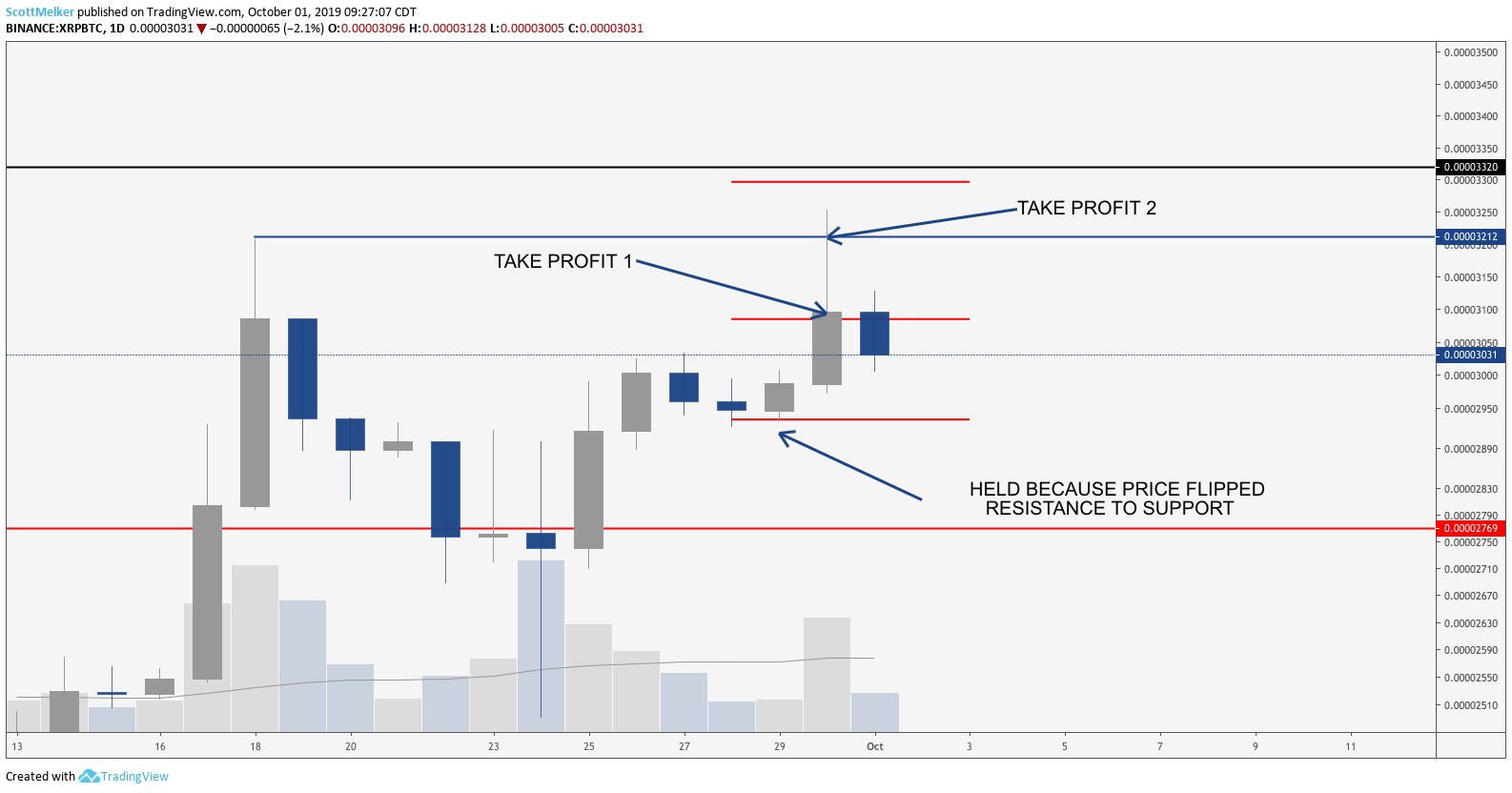 In addition, I noticed a clear bearish divergence forming on the daily chart, as well as hidden bearish divergence on the weekly. Both signaled to me that it was time to get out while I was ahead and in profit. At the time, Bitcoin also looked quite bullish to me and my assumption was that a large Bitcoin price move could negatively affect the XRP/BTC pair. 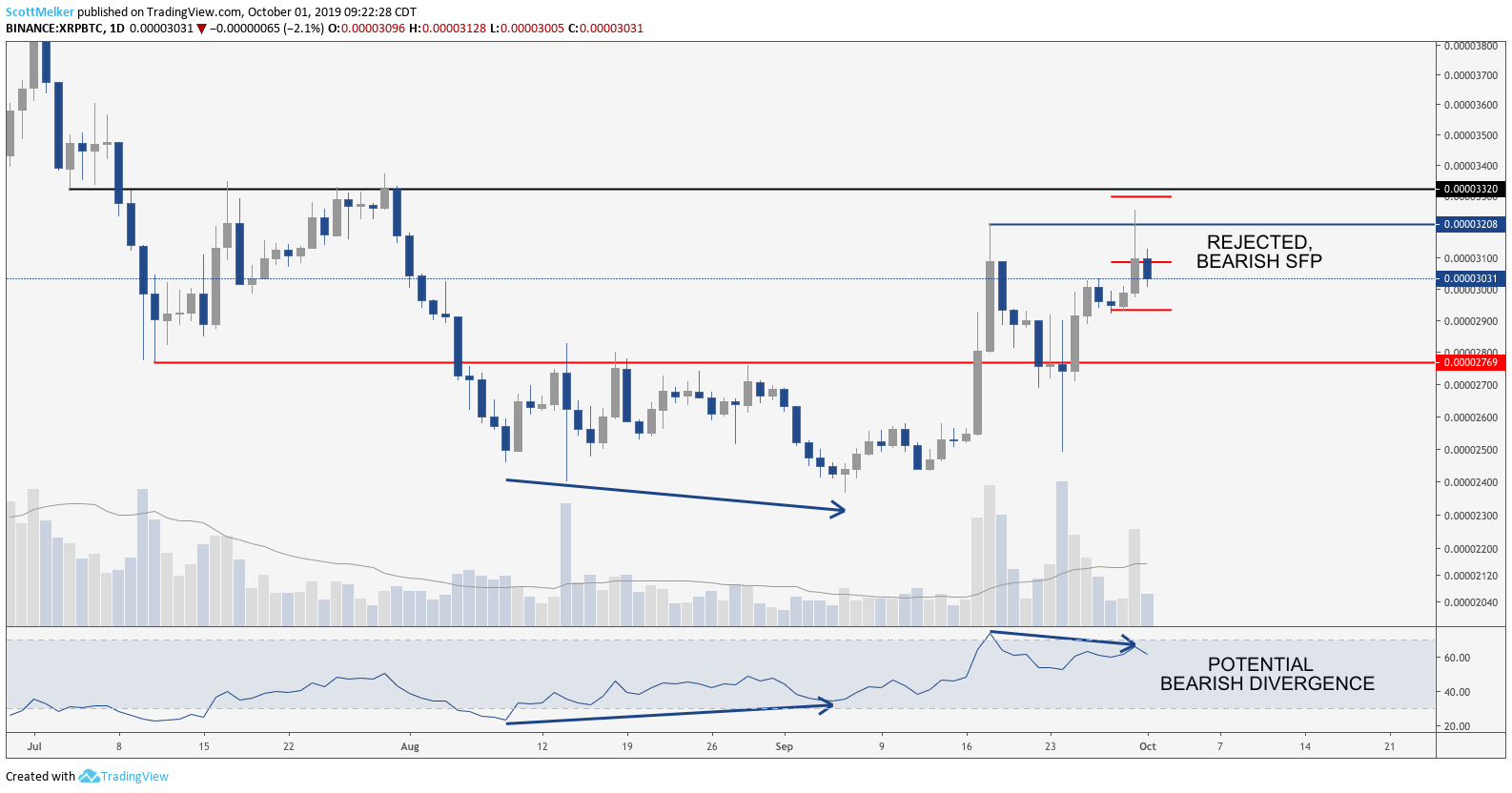 The first sell order elicited an 11.4% profit and my second order secured a 15.8% profit. Total profit for the position averaged out at 13.6%.

Entry: I hope to catch the breakout from bullish consolidation at .02065 (sats)

Ether has been in a sustained downtrend against Bitcoin since it’s all time high in January of 2018. The altcoin finally showed a clear reversal signal this month when it formed a head and shoulders pattern and breaking out on spike in purchasing volume.

I have been trading Ether aggressively since the middle of September and my first trade was the breakout of the head & shoulders at .017976 (sats). I closed this position at the bottom of the daily support at .021914(sats) which equated to a 23.5% gain. 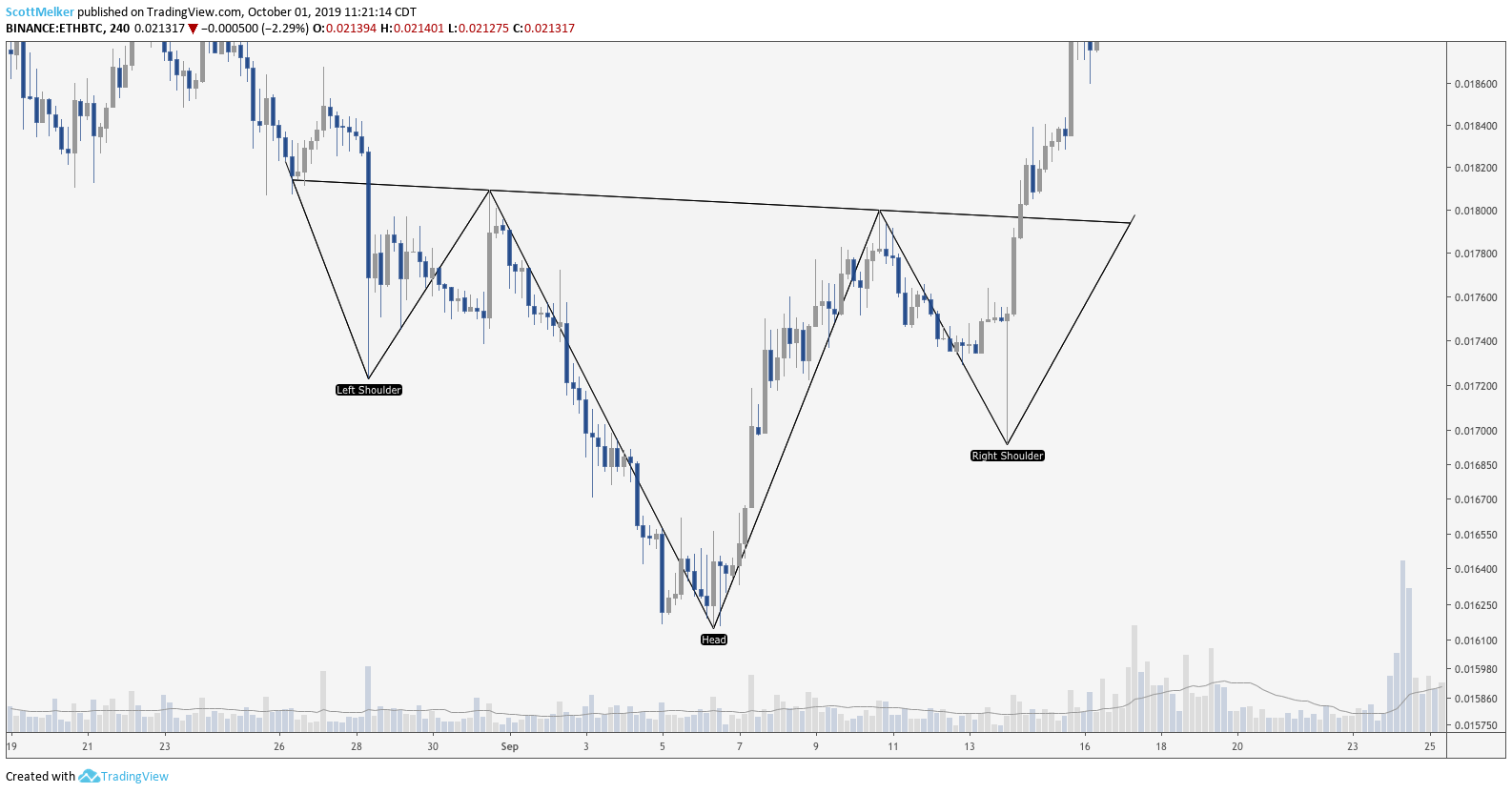 Although I am trading Ether against Bitcoin, the USD pair gave a solid sign of reversal. Ether price deeply pierced the weekly demand and bounced which resulted in long lower wicks on multiple candles. The relative strength index (RSI) was oversold and formed a strong bullish divergence against Ether’s spot price, meaning the RSI made a higher low while Ether’s price made a lower low.

Meanwhile, the Bitcoin pair was cooling off after it’s strong move from the bottom, and the pairing showed signs of consolidation before another move up. I decided to play the breakout of the descending resistance, a signal to me that reaccumulation was likely ending and the price was ready to continue it’s bullish movement.

With that said, I was wary of the fact that Ether’s price had already moved from oversold to overbought on the daily chart, so I viewed this as a scalp play.

The trade immediately went my way so I moved my stop loss into profit and waited. While analyzing the trade, I revisited the supply zone that was pierced at my first exit and decided to move my take profit point down a bit below the equilibrium (EQ) of the center dashed line. 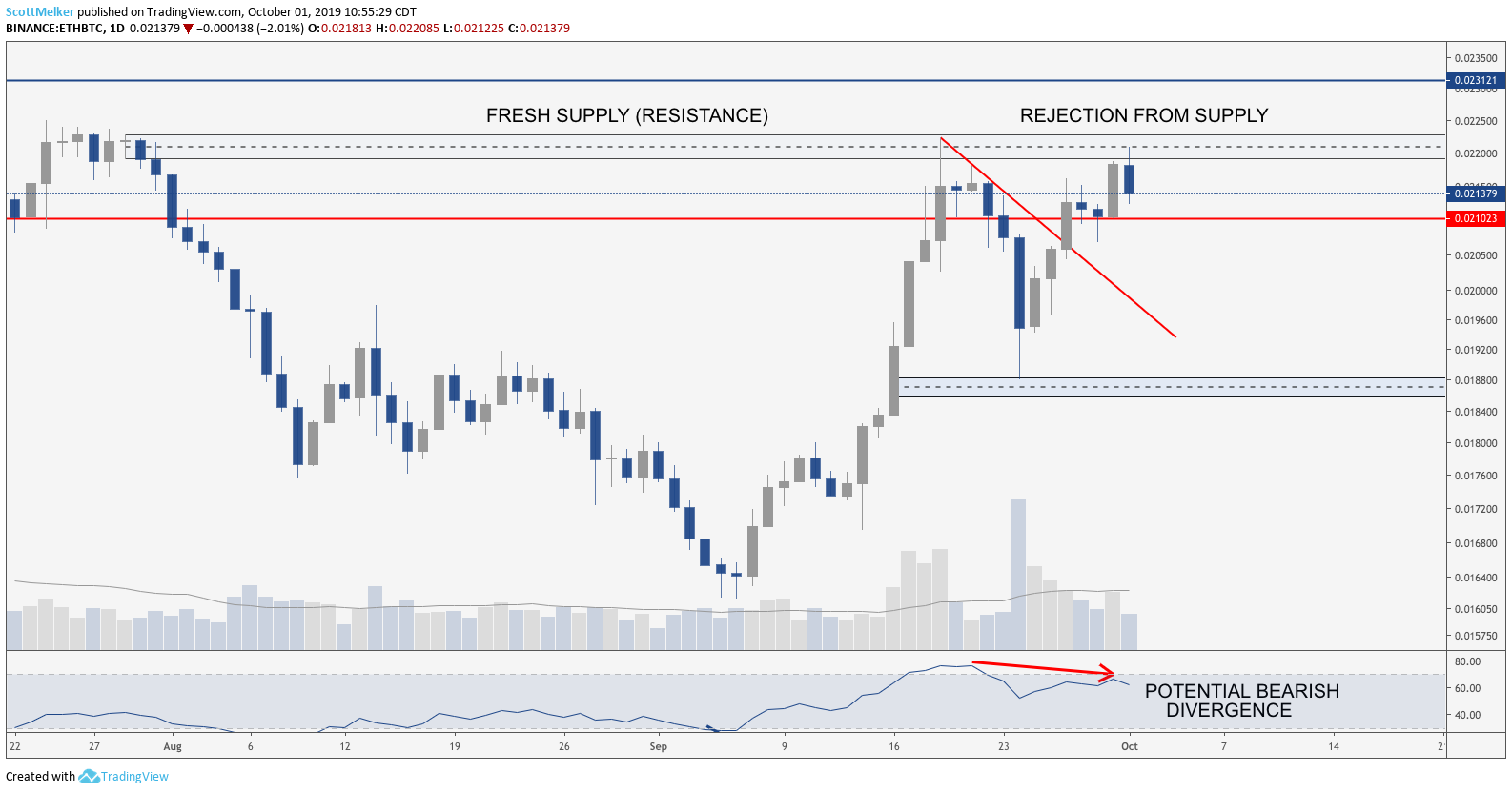 Barring a massive move up, I noticed that the price was likely to form a bearish divergence with the RSI on the daily chart. I saw this on multiple large cap altcoins (including XRP above), which added support to my idea that the pump was over for the moment. Bitcoin was also looking incredibly bullish to me, which usually has a negative effect on the ETH/BTC pair.

I am glad I did as the price was strongly rejected from this zone and my take profit order fired at .022 (sats) for a nice 6.5% profit.

One thing that can be taken away from this experience is that keeping a journal allows a trader to backtest and review candle patterns and support / resistance levels without confirmation bias. This improves the ability to execute and manage future trades.