Blockchain Adoption as a Cure for Cross-Border Trading

Blockchain can contribute to trade cost savings by replacing the paper-heavy custom processes that slow down trade.

In August of 2019, both the United States and Thailand announced their plans to test blockchain applications for tracking and managing shipments. The U.S. Customs and Border Protection (CBP) is planning to test a blockchain application against their current system to determine how distributed ledger technology (DLT) can improve its existing processes. Thailand, on the other hand, plans to use IBM’s blockchain-based logistics platform Tradelens to improve customs processes such as data sharing.

Originally developed in a joint venture between IBM and logistics giant Maersk, Tradelens seeks to streamline processes in the global shipping industry by making the flow of information occur in real-time. The blockchain platform is reported to currently process about half of the world’s shipping data.

These moves highlight countries’ increasing interest in employing blockchain technology in their customs and border operations. The Tradelens website says its ecosystem comprises over 100 different organizations including carriers, ports, terminal operators, third-party logistics firms, and freight forwarders. More specifically, a map on the Tradelens website suggests that about 60 ports and terminals worldwide are directly integrated with TradeLens.

Blockchain for digitizing customs documents in the EU

Elsewhere, the Directorate-General for Taxation and Customs Union (TAXUD), which develops policies and operational systems for the European Customs Union, explored the applicability of blockchain in customs and taxation with a focus on utilizing blockchain as a notarization service.

The Union is looking into using blockchain to digitize ATA Carnet, an international customs document used in 87 countries for temporarily admitting goods duty-free. A pilot project conducted in collaboration with the International Chamber of Commerce World Chambers Federation (ICC WCF), was successfully tested in 2018.

The ICC WCF, a body of the ICC that helps facilitate mutually beneficial partnerships between ICC members, has been working with different customs authorities to develop solutions for converting ATA Carnets into electronic documents.

About 80 countries around the world have developed authorized economic operator (AEO) programs and signed a mutual recognition agreement (MRA), all in an effort to streamline cargo security. Under such arrangements, individual countries identify and approve trustworthy logistics operators that pose a low risk in security and share the approval information with participating countries.

This allows countries to piggyback on the security checks of other countries to make customs operations more efficient. However, a few problems have arisen with the program.

To avoid the aforementioned problems as well as achieve additional time and cost savings on security procedures, customs administrations in Mexico, Peru and Costa Rica are working with the Inter-American Development Bank to develop a blockchain application called Cadena.

A joint development by monetary authorities in Singapore and Hong Kong, the Global Trade Connectivity Network (GTCN) is a blockchain-based cross-border infrastructure for digitizing trade, finance-related data and documents between the two regions. The GTCN platform hopes to cut out the inefficiencies in a process that still relies heavily on paper, stamps and faxes.

On the back of the world’s Gross Domestic Product (GDP) growing, total trade — the sum of exports and imports of goods and services — has been accounting for an ever increasing portion of the world’s GDP over the last few decades. World Bank data shows that nearly 58% of the world’s GDP came from cross-border trade in 2017, up from about 46.6% before the turn of the millennium. Trade as a percentage of the world’s GDP was just 24% in 1960. 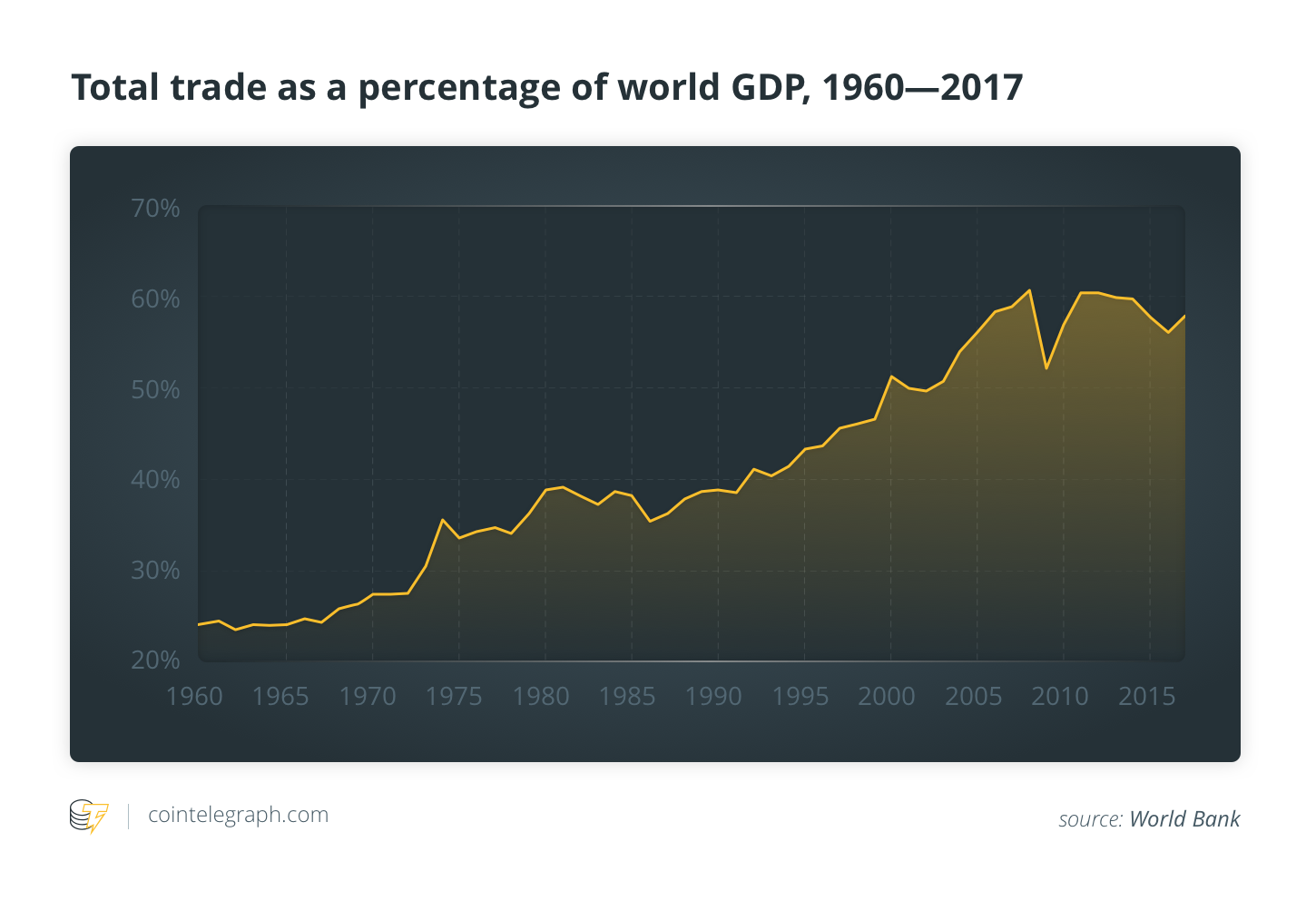 The data suggests that imports and exports are growing in importance for economic activity. Consequently, airports, ports and other border crossing points around the world are busier than ever. However, as trade activities are increasing, so are the associated direct and indirect costs.

Direct costs include all costs related to border and customs procedures, while indirect costs refer to costs incurred through delays at the border. The World Trade Organization has associated high trade costs to “frictions” that exist at various stages of goods exchange. In fact, in one of its reports, the WTO claims that high trade costs “effectively nullify comparative advantage by rendering exports uncompetitive.”

A separate World Bank report shows instead that countries with a high Logistics Performance Index (LPI), which measures a country’s overall efficiency in logistics and trade facilitation, tend to have lower trade costs. 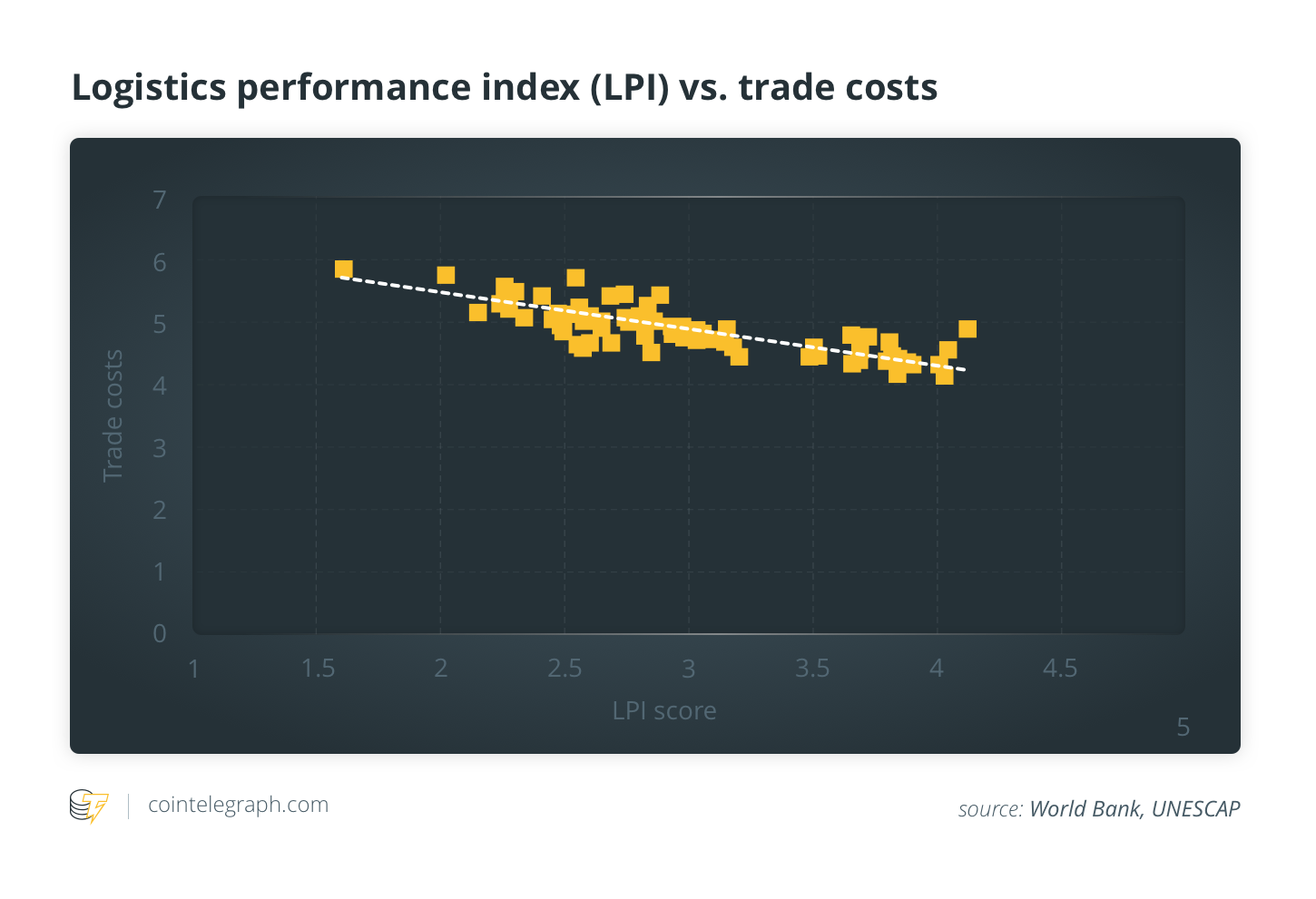 LPI is widely used across the globe as a benchmark for the state of a country’s trade logistics and combines performance measures in the following six areas:

— Efficiency of customs and border clearance.

— Quality of trade and transport infrastructure.

— Competence and quality of logistics services.

Since the results of these measures have a real-life impact on trade costs, one can see blockchain potentially bringing improvements to at least three areas, particularly for customs and border clearance, shipment tracking and frequency of on-time delivery.

In fact, the blockchain-based customs projects facilitate the provision of secure shipment data and documentation in real-time. This allows customs to operate faster and streamline their clearance processes.

The move by governments around the world to employ blockchain to improve cross-border trade marks a step toward paperless customs processes, which originally began with the digitization of information flows by making trade-related data and documents available and exchangeable electronically. For all the improvements they’ve brought to paper-heavy processes, traditional electronic data exchange systems still face the challenges of authenticity and the unavailability of real-time data exchange.

For instance, the Netherlands and China launched a five-year project in 2010 to test the applicability of electronic sanitary and phytosanitary (SPS) certificates. A World Economic Forum white paper titled “Paperless Trading: How Does It Impact the Trade System?” noted that concerns around the authenticity of the electronic documents arose. This necessitated the adoption of electronic signature systems and a whole new legal framework that recognized the electronic signature.

Still, the entire process requires longer procedures and the introduction of new types of intermediaries — e-signature providers, for instance. Moreover, low-income countries, the trade costs of which remain high compared to high-income countries as according to World Bank data, may not have the budget to implement several new systems for data and document digitization. They still need to invest in better customs infrastructure.

Blockchain, on the other hand, if implemented in border protection, will ensure real-time availability and immutability of customs documents while saving considerable costs on excessive paperwork.