Talking with the director of ecosystem at Hyperledger on blockchain adoption, community stereotypes and the power of education.

“In terms of general blockchain space, I think the biggest challenge today is lack of objective experts.” An interview with Marta Piekarska, director of Hyperledger’s ecosystem 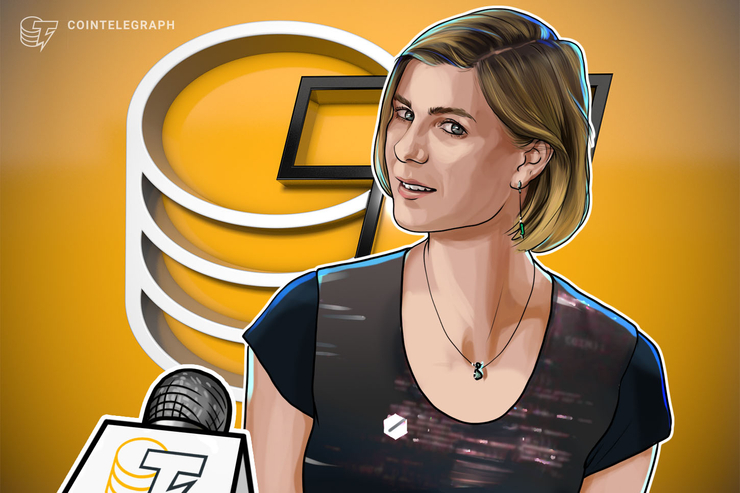 Hyperledger, an open source project hosted by the Linux Foundation, was created in 2016 to support the development of blockchain-based, enterprise-grade distributed ledger frameworks and tools. All the members of Hyperledger — including such major actors as Intel, Accenture, JPMorgan Chase, Hitachi, Fujitsu, Alibaba Cloud, Citigroup, Deutsche Telekom and many others — find their interest in blockchain technology and discuss it with Marta Piekarska, who is in charge of the project’s ecosystem.

We met Marta at the Anon Blockchain Summit in Vienna and talked about computer science, conservative vs. progressive sectors of economy, Hyperledger’s community and her favorite books.

Kristina Lucrezia Cornèr: Can you please tell us how the whole Hyperledger adventure started?

Marta Piekarska: The Linux Foundation was created 20 years ago to bring enterprises and the open-source community together to work on frameworks, tools and technologies to support certain fields. What started off with Core Linux, today has over 180 projects in every major industry.

Hyperledger started three years ago to bring enterprises and the open-source community to work together on enterprise-ready blockchain tools and frameworks. Every piece of code, every piece of work that ever happens under the Linux Foundation has to be under the Apache license. Hyperledger started three years ago with 30 founding companies, some of them the biggest in the industry: IBM, Accenture, JPMorgan Chase, Hitachi, Fujitsu and Intel, of course. And then, there are much smaller startups, like IntellectEU, that were founding members of Hyperledger, and some big but not very well-known companies, like Digital Assets or DTCC — the Depository Trust & Clearing Corporation, an American post-trade financial services company providing clearing and settlement services to the financial markets. Not famous, but crucial to the Trade Finance.

KLC: What about your position – Director of Ecosystems? What is your role?

MP: Ha, nobody knows! We, in Hyperledger, are very flexible and adjust to the needs of our members. Today, I define my role as member success. Hyperledger is a nonprofit, member-based organization. By members, we mean enterprises, as there are no personal memberships. Companies that want to benefit from the PR, marketing support, networking, promotion join Hyperledger as members. The technologies are 100% open source, you don’t have to ask permission to join special interest groups, you don’t have to ask for the permission to download the code. But there is a lot that can be done in the blockchain space to support your development of products, solutions, etc. That’s basically what we at Hyperledger do, and my focus is on working with our members to define what it means to be a successful Hyperledger member, why did they join this gentlemen’s club, if you will.

KLC: That is some very gender-focused language.

MP: (Laughs) It is very British. Though today, those clubs are nongender-specific: Think of SOHO house or the Battery, for instance.

The role of gender stereotypes

KLC: How is it to be a woman in the blockchain “gentleman’s club”?

MP: My background is in humanities. I never actually planned to study computer science, I never thought of technology before I applied to a technical university. I lost a bet, basically. The bet was that I had to apply to a technical university — and if I got in, I had to at least start studying. So, I did that, I randomly chose electrical and computer engineering because it sounded fancy. I started, and after two months I knew this was exactly what I wanted to do in my life. I wanted to code — I loved coding.

It was a very rough ride for me: Anything that you start learning compared to the other people that have been doing that for the X amount of years is harder. In high school, I was a top student, always the best in class. I went to university and I hardly made it through the first semester, I hardly passed all of my exams. Then, it got slowly better and better, obviously.

"The other thing was the way I have been treated by my professors: It was pretty awful. My favorite story was two or three weeks in, when one of my professors said to me: “Oh, I guess computers don’t like you, but don’t worry, computers in general don’t like women.” Great. I’ve also received comments like “Maybe ballet school will be better for you than the computer science school.”

Initially, it was 80 of us that started and five women. After the first semester, there were twenty of us and two ladies — me and another one.

The thing I don’t like about this industry in general is that it is very gender (or sexual orientation or color)-focused. It’s rarely about your intellect, it’s just always about your gender.

I’ve found the hacker community extremely welcoming, and I’ve never had problems with being open about being bisexual or being a woman, and all of my hacker friends are queer one way or another. Unfortunately, the traditional industry is very much about, “you’ve got this scholarship because you’re a woman,” or “you didn’t get this scholarship because you’re a woman.”