Cannabis and Crypto: Equal Beneficiaries in the Fight to Hit the Mainstream

How these non-traditional asset classes are using each other to break down barriers.

Cryptocurrency caught mainstream attention when the industry’s total market cap hit $600 billion at the end of last year. The highly anticipated cannabis industry in the United States is similarly being pushed into the spotlight by a “green rush” of investors flooding Wall Street, who expect the industry to be worth $75 billion by 2030.

Aside from attracting high volumes of bold new investors, the cannabis and cryptocurrency industries in the U.S. also share some major issues: Both are high-risk, legally uncertain and have government regulators breathing down their neck. The potential uses of cryptocurrency and blockchain align with the demands of the developing cannabis market, and through a coordinated effort, the unexpected pair can propel themselves to legitimacy in the dynamic modern economy. 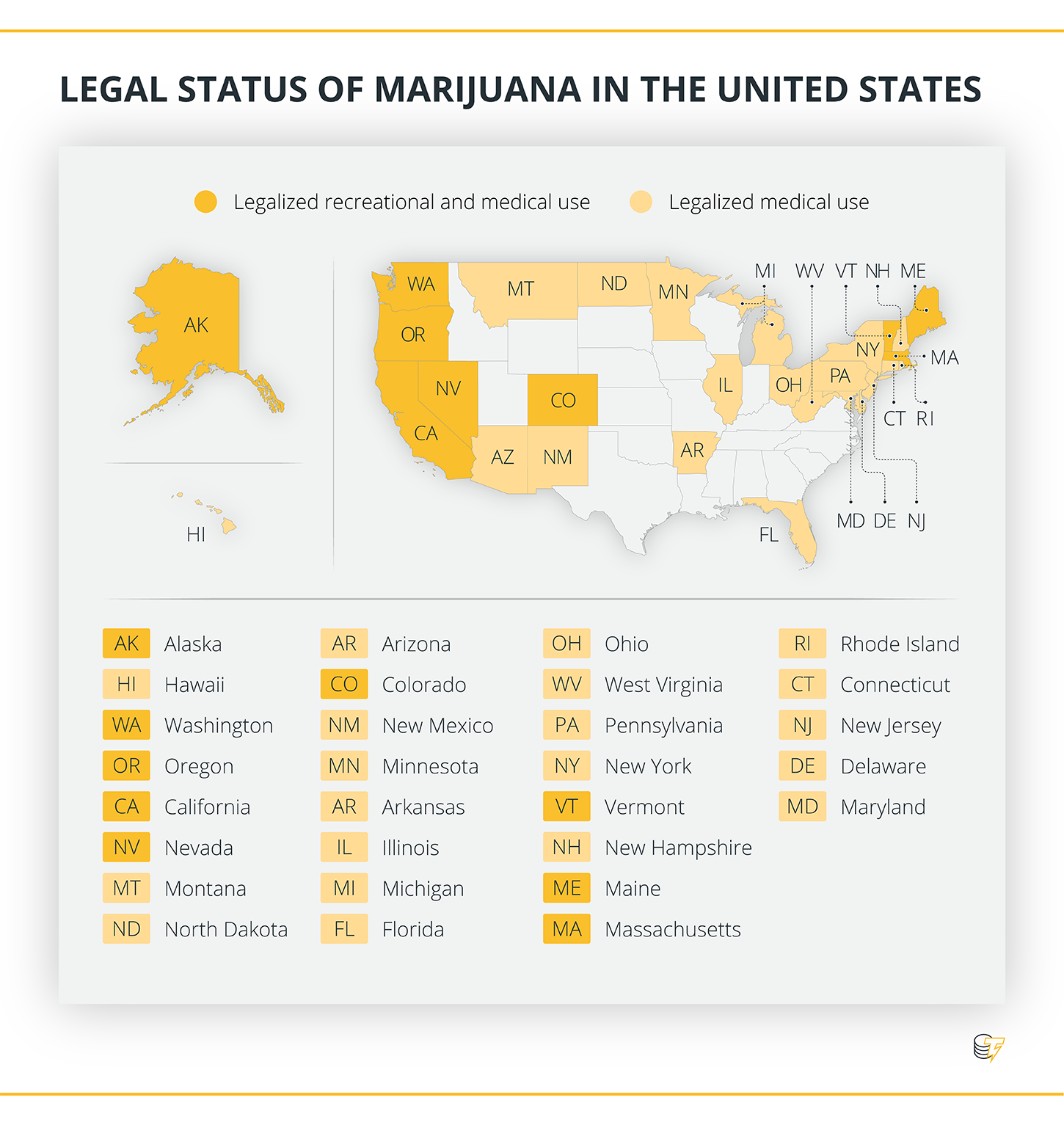 Cannabis businesses in the U.S. operate on a cash-only basis because banks, which all operate under federal regulation, are prohibited to service an industry that is still deemed illegal under federal law. Cannabis dispensaries can hold up to $100,000 in cash at any given time, and if a business's finances are not carefully reported to state regulators, their cash is extremely vulnerable to seizure by police using broad asset-forfeiture laws.

On the flipside, state treasuries don’t collect their fair share of taxes on marijuana sales. The inconvenient and unsecure tax collection processes, whereby dispensary owners may have to cross the state with armed guards to deliver hundred of thousands of dollars in cash to the state's IRS offices, leads many businesses to cut corners while reporting sales.

PotCoin, one of the most popular cannabis cryptocurrencies, was first created in 2014 to address the financial limits placed on cannabis dispensaries. PotCoin targeted the Colorado recreational marijuana market and installed a PotCoin ATM at a dispensary in the state, but failed to be integrated into dispensaries early on in its tenure. In a turn of events, the currency’s value shot up 76 percent in just one day, after famed NBA star Dennis Rodman wore a PotCoin.com t-shirt while traveling to North Korea under intense media spotlight. It’s current market cap hovers around $10 million at press time.

Although PotCoin struggles to establish itself as a mainstay in the industry, it announced a promotional agreement with WeedMD last December in what appears to be the first-ever partnership between a cryptocurrency and a federally licensed producer and distributor of medical cannabis. Community members eligible to shop on WeedMD will be rewarded for using PotCoin. The announcement was made in anticipation of the legalization of recreational pot in Canada this summer.

As part of a global initiative for mass adoption, Potcoin worked with development teams at PotWallet and General Bytes PotCoin to offer their currency in over 800 crypto ATMs around the world in order to make funds more readily available for customers and to ease the transaction process for cannabis vendors.

Similar to PotCoin, CannabisCoin is described as a marijuana-based cryptocurrency for medical marijuana point-of-sale. The developers created a ‘CAANdy system,’ whereby one gram of marijuana costs 1 CANN. The creators of CannabisCoin sought to create a simplified and accountable system for dispensaries to record medical sales in order to comply with strict regulations in the U.S. that ensure medical marijuana doesn’t end up in the wrong hands.

HempCoin is also among one of the first 30 cryptocurrencies created in 2014, but focuses on the exchange between marijuana farmers and dispensaries. The coin first addressed the need of financial infrastructure for cannabis farmers but has broadened its mission to service the agricultural industry more generally.

In August, HempCoin announced a partnership with Evolution Host, a VPS hosting provider, which will accept HempCoin as payment in an effort to promote widespread adoption of its use. Likewise, HempCoin is accepted on Stembis.com, a major Canadian online cannabis marketplace.

Marijuana altcoins have seen some success; however, most are struggling to find mainstream acceptance and have failed to provide a big return to investors. The most popular coins PotCoin and HempCoin, both stand at market caps below the  $10 million mark, numbers that can hardly be called impressive.

Another major issue facing pot businesses are the high costs of opening a cannabis dispensary, which are much higher than those of a typical small business. The sum total of licensing and permit fees, finding pot-friendly retail space, investing in POS and security systems, and having enough capital to demonstrate business viability can all cost between $250,000 and $750,000.

Small businesses in the cannabis sector can take advantage of a provision in the Jumpstart Our Business Startups (JOBS) Act that expands entrepreneurs’ access to capital by allowing them to engage in crowdfunding initiatives like ICOs. Title IV, or Regulation A+, allows private businesses to raise up to $50 million from public investors, which is particularly beneficial for small dispensaries aiming to tap into a larger pool of online investors.

High Times Holding Corp. first announced it would accept Bitcoin and Ethereum in its IPO in August, making it the first ever traditional stock offering to accept cryptocurrency investments by taking advantage of Regulation A+. However, the company apparently backtracked on its promise to accept BTC and ETH in its IPO just two weeks later when it filed regulatory paperwork with the Securities and Exchange Commission (SEC) excluding the cryptocurrencies.

Despite the confusion, Bitcoin remains as a payment option on the company’s investment portal. A representative from High Times clarified that a third-party will convert Bitcoin to fiat currency for the company to avoid holding any investments as cryptocurrency and any controversy with the SEC. The CEO of the marijuana media organization, Adam Levin, said while he “didn’t believe that the ICO process was the right move for [the] brand, it would’ve been foolish to leave this emerging investor base out.”

Blockchain as a legitimacy tool

Advertising cannabis businesses and products is prohibited in many instances due to stringent federal regulations. Major platforms like Google and Facebook are unlikely to change their policies against advertising legal and recreational drug use until marijuana is cleared at the federal level, which isn’t expected under the anti-pot Trump administration.

Despite 29 states having already legalized medical marijuana, there are few educational resources or services that provide information about the benefits and potential side effects of particular marijuana strains. The history of production or origin of strains for sale is even less clear to consumers.

A Canadian, blockchain-based ‘social marijuana network’ CannaSOS, is addressing many of the shortcomings of the newly legalized cannabis industry in the country. CannaSOS integrates blockchain tech into its platform to connect buyers, sellers and advertisers in a transparent and accountable network. CannaSOS provides a centralized online meeting place for cannabis enthusiasts to engage with other users, find and share cannabis-related information, search and review particular strains, and locate 420-friendly businesses. The site rewards user participation with Perk$coins that can be converted to fiat currency or exchanged for goods and services offered by businesses within the CannaSOS network.

The Cannabis Hemp Exchange, or CHEX, is a similar service that provides a platform to cannabis cultivators, manufacturers, intermediaries and product brands to use for marketing, order management and distribution. CHEX is described as a service for the wholesale exchange of cannabis commodity in B2B transactions, or for business-to-business customers.

The blockchain firm Paragon is addressing the demand for more transparency and standardization in cannabis supply chains by creating a crypto token built on smart contracts to systematize the traditionally fragmented cannabis industry. The company’s digital token, ParagonCoin, allows users to directly participate on the Paragon platform and, like others of its kind, offers a banking alternative to cannabis businesses. Paragon’s ICO, which took place last year, raised $70 million but was hit with claims the ParagonCoin was overvalued.

In tandem, Paragon’s open-source blockchain, Parachain, ensures immutability and easy access to data concerning final cannabis products. Paragon’s ‘seed-to-sale’ solution means businesses won’t have to question the source of the final product sold to customers. Each stage in the supply chain is recorded by responsible parties - like growers, manufacturers, logistics, and scientists testing the product in labs - and launched as a smart contract.

Additionally, Paragon's business model accounts for the need for physical workspaces for cannabis businesses and entrepreneurs and offers co-workspace locations that members can pay for exclusively with cryptocurrency - one of the first all-crypto real estate offerings. Paragon’s CEO, Jessica VerSteeg, says the workspace is near full capacity with 80 tenants, and that Paragon has partnered with various cannabis aficionados like Dank City, Aurora Elixirs, Green Helix and the podcast Casually Baked.

Cannabis and Cryptocurrency: A match made in heaven

Logistics and supply chain management are the strongest cases for blockchain adoption. The efforts to add transparency and accountability to the supply chain management of cannabis businesses yields positive effects to the social stigma surrounding marijuana use. Medical marijuana dispensaries are successfully rebranding the drug by providing detailed information about the medicinal properties of particular strains, but communities moving to legalize pot still see pushback over concern that the legal cannabis will inevitably fall into the wrong hands.

Blockchain solutions like Paragon’s ‘seed-to-sale,’ CannaSOS’s ‘social marijuana network,’ or dispensaries using cryptocurrencies as a secure and accountable mechanism for sale are the key to ensuring accountability in the pot industry and to facilitating a positive ecosystem for buyers and sellers.

The growing cannabis industry in the U.S. has proved its profitability (national marijuana sales in the U.S. are estimated to hit $11 billion this year), but in terms of commoditization, pot still faces many hurdles.