China: “There is space for Bitcoin” – PBOC Deputy Secretary

Speaking June 19, General Secretary of PBOC Xu Nuojin had some statements on the future role of the Internet in finance, which included Bitcoin 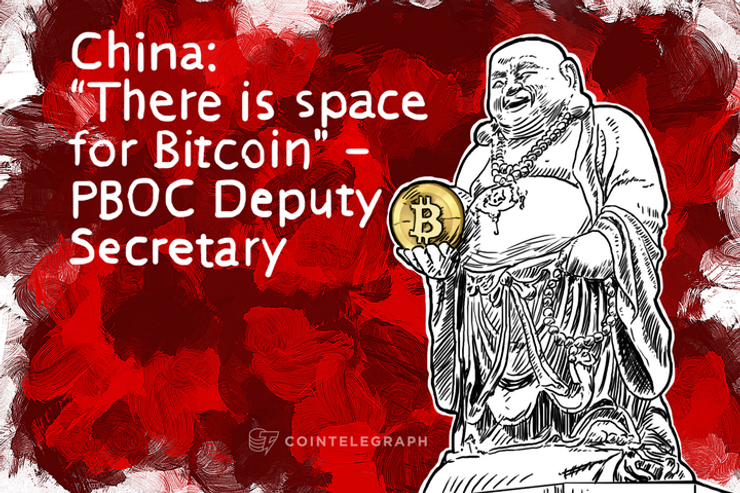 “Finance itself […] is in essence a bookkeeping system which is responsible for recording debts and liabilities between people.”

Sound familiar? Not when it’s from the People’s Bank of China – but it is.

Speaking June 19, General Secretary of PBOC Xu Nuojin had some statements on the future role of the Internet in finance, which were hardly earth-shattering – but his choice of vocabulary was interesting indeed.

Items of the statement subsequently translated by Reddit user u/KoKansei reveal not only this but an explicit mention of Bitcoin, namely that “there is space for Bitcoin to exist”.

Coming after months of hostility resulting in restrictions on exchanges, consumer weariness and price swings affecting the entire Bitcoin ecosystem, could there perhaps finally be reason for optimism around Bitcoin in China once more?

In the aftermath of China’s significantly affecting the Bitcoin community, statements from the PBOC and others have been treated with caution rather than with kneejerk reactions. The latest comments have largely received the same reaction, with BTC China’s Bobby Lee playing down any idea that a revolution is on the cards. He commented to CNBC Sunday:

Lee has often mentioned the Chinese style of legislation – using indirect, obfuscating language to effectively make Bitcoin entities abide by implied laws – but critical or not, lawmakers are now far away from shutting out “large breakthroughs in the concept of monetary and financial sovereignty” altogether.

However, Lee is proving himself to be quite the pragmatist when it comes to Bitcoin advocacy. During a speech at the Asia Society yesterday, he caused a media stir following his advice that “the ordinary person should not buy Bitcoin,” adding, “It’s too early [in its development] … If you’re not up for volatility risk, you shouldn’t own or buy Bitcoin.”

While it is tempting to extract pessimism from the comments, however, Lee is as strategic as he is sensible. Announcements from PBOC in April were greeted with cautionary steps from all major Chinese exchanges, with abstention from the Singapore Bitcoin summit being an example of Lee’s and others’ attempts to ‘take a low profile.’

Meanwhile, Lee announced during his keynote speech at the Inside Bitcoins conference in Hong Kong a swathe of upgrades to BTC China’s Picasso ATM mobile Bitcoin wallet, revealing an intense focus on increasing activity outside China’s borders.

The highlight features a ‘sell for cash’ function which allows users to sell BTC for fiat in any location, available provisionally for eight currencies in 10 languages.

As Lee seeks to consolidate BTC China’s position globally, Bitcoin is witnessing some landmark events which will most likely have implications within Chinese borders, too.

Explicit legislative moves in Canada and California may well provide additional impetus for lawmakers in China to step up already hawkish monitoring of Bitcoin’s development in adjacent markets such as Hong Kong, Macau and Singapore.

Related News
Binance KYC Breach — Did It Happen, and If So, Who’s to Blame?
Blockchain Platform Unveils Partnership to Boost Crypto Compliance
Crypto Will Eventually Replace Fiat, but How Soon and Where?
Chinese Authorities Confiscate Nearly 7,000 Crypto Mining Machines
Central Bank of China Official Says Digital Yuan Will Be Different From Bitcoin
Canaan's New 5-Nanometer Chips to Escalate ASIC Arms Race With Bitmain
<div is="sidebar" :sidebar-data="{"promoButtonsI18n":{"crypto-button":{"url":"crypto.btn.sidebar.url","label":"Get Crypto At True Cost\n","text":"Cryptoassets are complex instruments and investments carry a high risk of losing value. You should educate yourself in how crypto-markets work before making any investments. Always invest responsibly and be prepared for the risks associated with investing in or using cryptoassets. This promotion cannot be considered investment advice."},"etoro-button":{"url":"https:\/\/ad.doubleclick.net\/ddm\/clk\/437480595;240556498;x","label":"Try Etoro","text":"Trade on the world’s leading social trading platform (Highly volatile investment product. Your capital is at risk)"},"hitbtc-button":{"url":"https:\/\/hitbtc.com\/?ref_id=5cba0be404aa3","label":"BEST LIQUIDITY ON HITBTC","text":"Note that all trading strategies are to be used at your own risk. Before trading, we recommend to make sure that you have a clear understanding of cryptocurrencies and how they are traded."},"changelly-button":{"url":"https:\/\/changelly.com?utm_source=cointelegraph&utm_medium=referral&utm_campaign=changellyctengbutton&ref_id=le9ssi8dgmskmqu0","label":"BEST RATES ON CHANGELLY","text":"This is to note that you should realize all crypto trading risks. Please make sure that you understand how crypto exchange service works."},"nexo-button":{"url":"https:\/\/nexo.io\/?utm_source=cointelegraph&utm_medium=fixed&utm_ter