Canaan will try to drive up its Nasdaq-listed stock from the $2 price mark.

On Sept. 8, the Nasdaq-listed company officially announced that its board of directors has  authorized a share repurchase program to repurchase up to $10 million worth of its American depositary shares, or ADSs.

Under the share repurchase program, the mining giant is authorized to repurchase its ADSs “from time to time” through open market transactions at prevailing market prices, privately negotiated transactions, block trades or “any combination thereof,” the firm’s executives said.

In the announcement, Canaan’s representatives said that repurchase transactions will be conducted in compliance with Rule 10b5-1 and/or Rule 10b-18 under the Securities Exchange Act of 1934. The number of repurchased ADSs and the schedule of repurchases will depend on several factors like price, trading volume, general market conditions, as well as Canaan’s working capital requirements and general business conditions, the company’s reps noted.

Also known as a share buyback, a share repurchase is a decision by a company to buy back its own shares from the market. Companies usually repurchase shares to increase the value of the stock to improve their financial statements.

Headquartered in China, Canaan is the first ever cryptocurrency mining firm that was listed on a United States exchange. In November 2019, Canaan conducted an initial public offering on major stock exchange Nasdaq, raising $90 million by 10,000,000 shares for $9 each, which was reportedly over 75% less than expected originally.

Canaan’s stock suffered a major drop since listing on Nasdaq, with shares never going higher than $9. In March 2020, CAN stock collapsed to below $3 after investors filed a class action suit against the firm. The lawsuit stipulated that Canaan made misleading statements regarding its financial health.

After recovering up to $6 in May 2020, Canaan stock has seen a number of consecutive sell-offs, leading the stock’s price to as low as $1.9 on Sept. 4, according to data from Nasdaq. 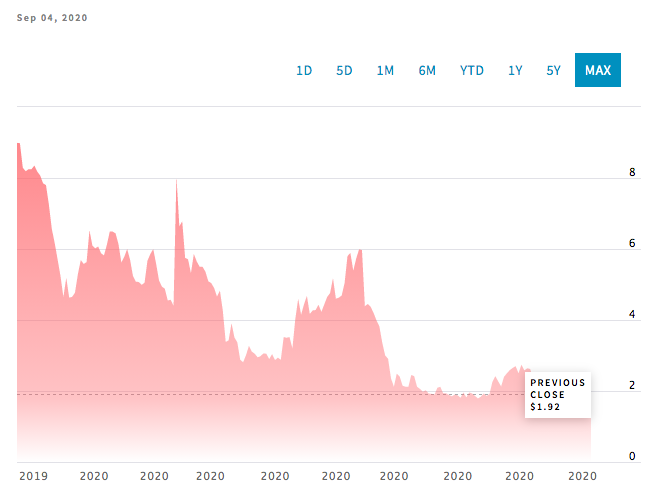 Cointelegraph reached out to Canaan with additional queries regarding the share repurchase program. This article will be updated pending any new information from the company.