6336 Total views
154 Total shares
Listen to article
0:00
News
Own this piece of history

According to data published to Twitter by Whirlpoolstats’ Matt Odell, March activity  comprised 40% of the then-total volume produced by Whirlpool since its launch in May 2019.

Samourai Wallet’s Whirlpool has seen a notable increase in user activity during 2020 so far.

While Whirlpool saw a retraction in user activity at the end of 2019 after posting a record of 303.55 BTC in volume during October, each month of Q1 2020 set consecutive records for the number of Bitcoin’s mixed on the platform. 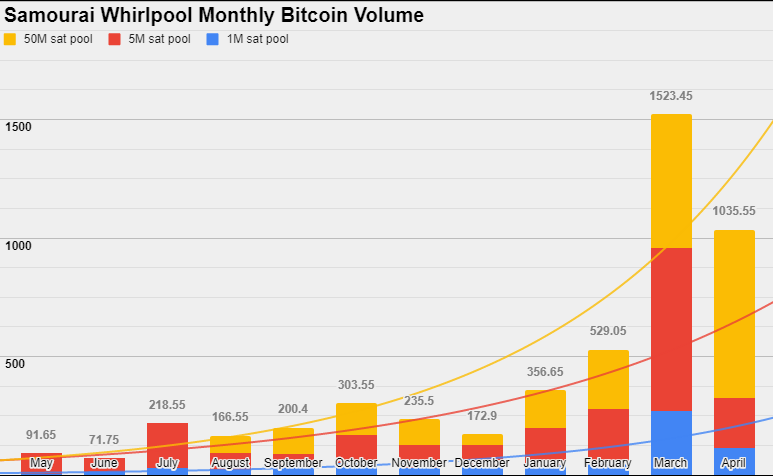 April appears on-course to set yet another record for the service — with 1,020.80 BTC or 67% of March’s total having been mixed just 11 days into the month.

The service uses CoinJoin to shuffle UTXO’s and mitigate any deterministic links between them. According to Samourai, each mixing cycle can be interpreted 1,496 different ways, with further cycles increasing interpretations exponentially.

User funds are grouped into pools of 0.01 BTC, 0.05 BTC, and 0.5 BTC when mixed. The 0.05 BTC and the 0.5 BTC pools have generally oscillated between comprising the largest pool by monthly volume.

In December 2019, crypto exchange Binance Singapore reportedly froze a customer’s funds amid an investigation into a transaction that had been mixed using Wasabi wallet’s CoinJoin service.

A Binance representative told Cointelegraph that its Singaporean exchange “does not tolerate any transactions directly and indirectly associated with gambling, P2P, and especially darknet/mixer sites.”

In February 2020, Ohio local Larry Harmon was arrested for allegedly operating the darknet Bitcoin mixing service Helix from 2014 until 2017. IRS Criminal Investigation head, Don Fort, stated that “the sole purpose of Harmon’s operation was to conceal criminal transactions from law enforcement on the Darknet.”