Here’s why Goldman’s approach to Bitcoin is ‘stale’ and ‘hasn’t evolved much.’

Ginns and Grider joined Cointelegraph’s weekly Crypto Live Show to bring an investor’s perspective to the usual trader-heavy lineup. They also dive deeply into a broad range of topics including how they began investing in crypto, why they’ve stayed, crypto’s macro impact on the world of finance, private and central bank digital currencies, and institutional involvement in the space. Watch the livestream’s full recording in the video above or skip to 23:05 to go directly to the discussion on Goldman Sachs.

Cointelegraph’s Crypto Markets Live broadcasts every week on Thursday afternoons eastern time. The next show will feature crypto traders Big Cheds and Korean Jew Crypto, so subscribe to the Cointelegraph YouTube channel to make sure you don’t miss when we go live!

Cointelegraph reported that in a May 27 call discussing the state of the U.S. economy, Goldman Sachs appeared to discourage clients from investing in Bitcoin. This was discovered after a Powerpoint slide of Goldman’s presentation was leaked to the public. 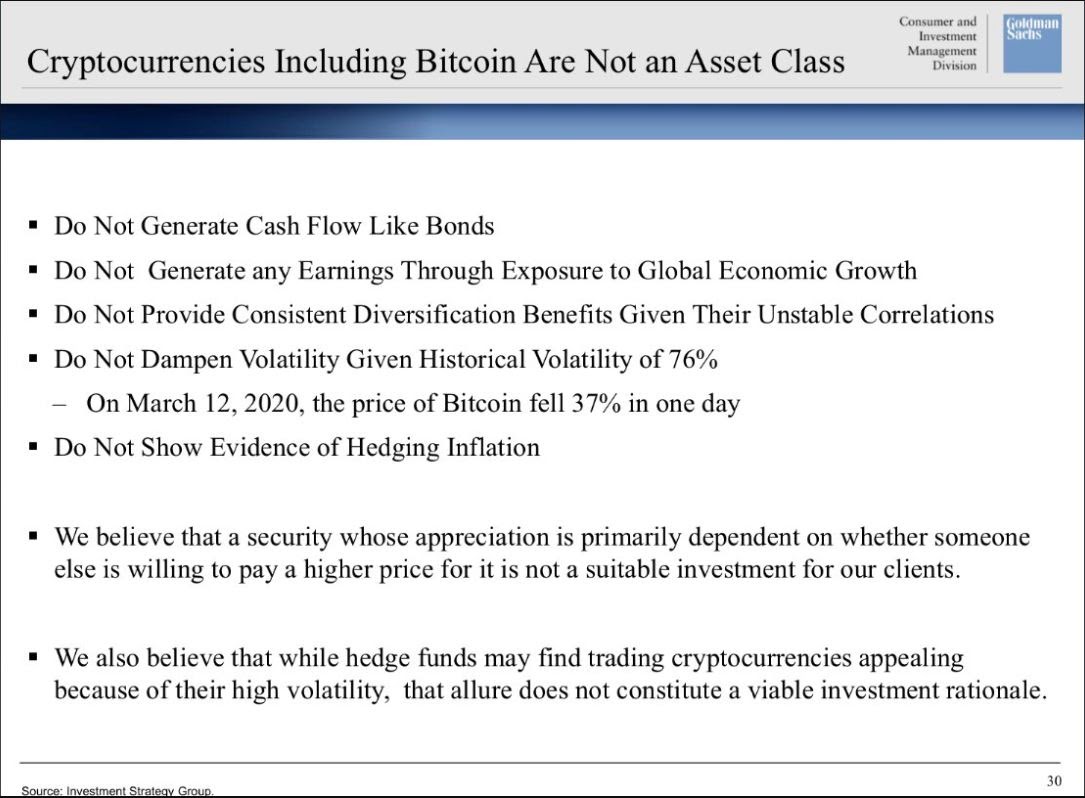 On the opposite side of the spectrum stands former presidential hopeful Michael Bloomberg, who already acknowledged cryptocurrency as an asset class. When asked whether they supported Bloomberg or Goldman’s perspective, both Ginns and Grider sided against Goldman.

Ginns, who is a portfolio manager at CoinFund, stated that he thought the question of Bitcoin being an asset class was already settled. He went on to point out another flaw in a different part of Goldman’s presentation, suggesting he was privy to the entire report:

“One of the interesting takedowns of crypto that we’ve seen — we saw it yesterday — was the idea that a lot of crypto is used for illicit purposes, and I found it really funny… So I thought that was a really good indicator of how stale that type of argument is as a takedown on crypto.”

Grider also noted how Goldman’s approach to crypto hasn’t changed much over the past few years:

Grider goes on to explain why he thinks Goldman’s stance is due in part to political motivations. To hear the full explanation, check out Cointelegraph’s May 28 Crypto Markets Live stream in the video above.