A user reward scheme to distribute the new Compound governance token (COMP) has resulted in a dramatic rise of the value locked in the decentralized finance protocol as traders sought to “farm” the token, as fans affectionately call the practice.

According to data from Defi Pulse, the Compound protocol’s total locked value soared from about $100 million to a high exceeding $600 million since June 15, the start of the COMP token distribution. 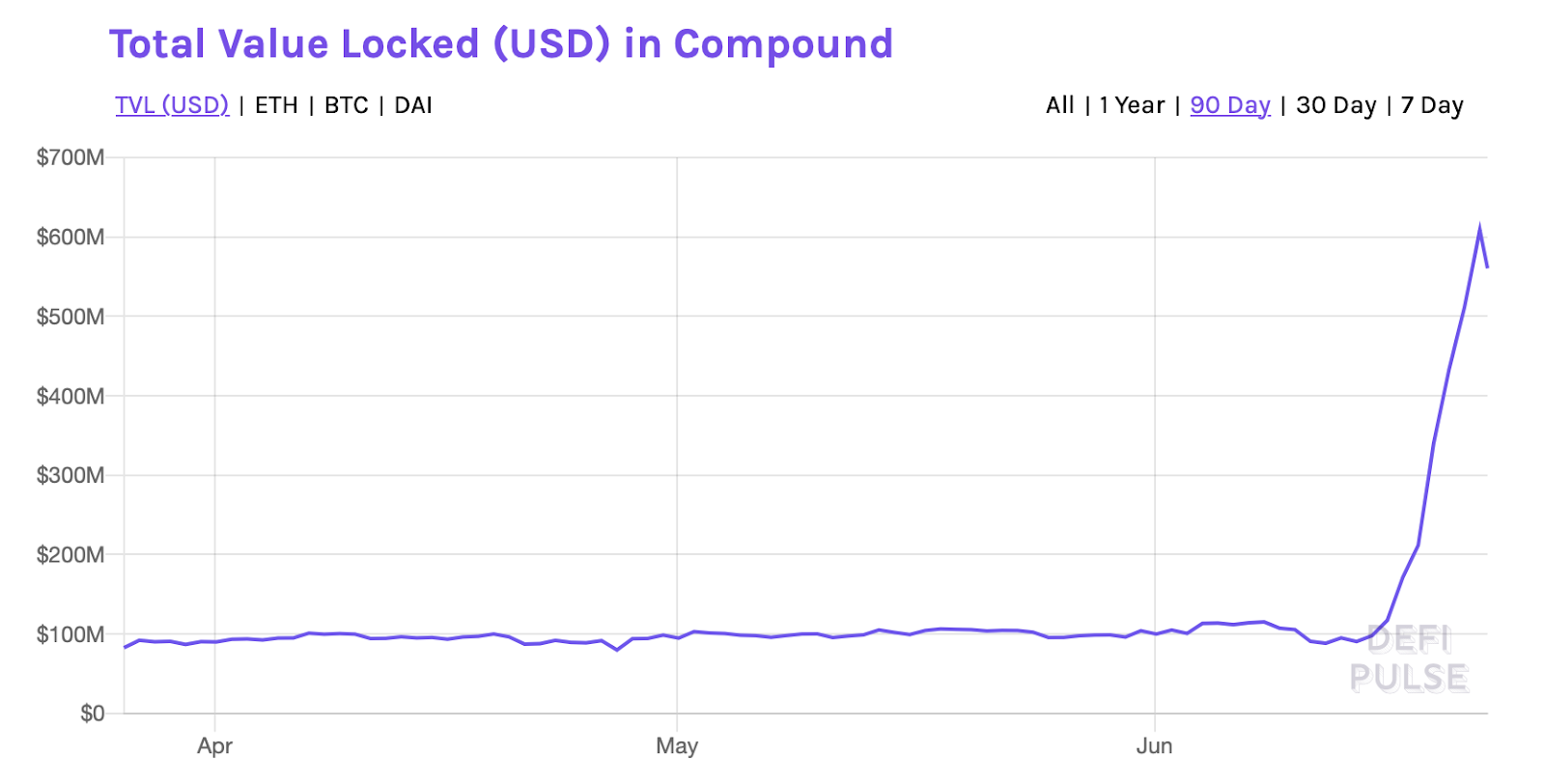 The COMP reward scheme works by periodically depositing the token to all balances interacting with Compound. This includes the protocol’s lenders and, crucially, its borrowers as well.

The sums involved are significant, with the protocol currently distributing 2,880 COMP per day worth about $668,000 as of press time. Over 4 million tokens are left to be distributed from an existing supply of just over 2.5 million.

Meanwhile, the price of the token went on a parabolic rise once it was revealed that Compound investor Coinbase would list COMP on its Pro platform.

Trading is due to be activated on June 23, but that didn’t stop traders from raising its price to a maximum of $371, up from just $78 the day before the announcement.

The high issuance and high price, coupled with the way the reward system is designed, led to the emergence of massive “COMP farming.” Speculators were incentivized to both borrow and lend money from the protocol on a large scale, leveraging their positions by recursively “lending” the tokens they borrowed.

The annual interest rate on some tokens on Compound, like BAT and wBTC, reached as much as 33% and 27% respectively as of press time. Generally, high interest rates are associated with high COMP yield.

The profit machine appears to be unwinding on Monday, as COMP dropped to a price of $264.

The risks of “farming”

Some high profile commentators like MyCrypto CEO Taylor Monahan voiced their reservations about the scheme and the risks involved. Vitalik Buterin, co-founder of Ethereum, said:

“Interest rates significantly higher than what you can get in traditional finance are inherently either temporary arbitrage opportunities or come with unstated risks attached.”

Tony Sheng, a crypto angel investor and former principal at Multicoin Capital, explained that the risks to farming involve either theft of collateral assets, liquidation due to market events or the loss of the peg for synthetic assets like stablecoins.

However, it’s worth noting that these risks have always existed for Compound and many other platforms, and are not related to the practice of yield arbitrage. The true risk seems to be for those who are buying the “farmed” COMP, as its price tumbled by almost 30% since its all-time high, sitting at $264 as of writing.

It is likely that this will allow the “yield bubble” to deflate, as mining COMP will no longer be as lucrative.