Bitcoin (BTC) dominance remains high at 66.3% and so does the amount of attention traders are dedicating to the largest digital asset’s price action.

Last week’s move from $7,800 to $8,850 will have further entranced investors, and the hope of breaking above $10,000 may have distracted some traders from noticing the awakening that has occurred with many altcoins.

As reported by Cointelegraph, a growing number of altcoins have posted impressive gains as Bitcoin consolidates and it appears the trend is set to continue. For some traders, this is a welcome change of events.

Bitcoin’s multi-month consolidation in a giant descending wedge led altcoins to defy trader’s common logic and the majority of altcoins continued to drop to new lows instead of rallying.

A likely explainer of this scenario is that:

It seems that the most recent drop from $10,300 to a multi-month low at $7,700 served as a signal to invest in altcoins. Some traders have found confirming evidence in comparing Bitcoin and altcoin fractals to identify bottoming patterns and the possibility of future rallies.

Others recall 2018 when Bitcoin traded in the $6k range for many months before dropping to $3,200 in November as the Bitcoin Cash hard fork took place.

Bitcoin’s recent price action in the $10k to $9k range might have led some traders to predict that a drop below $8,000 might eventually bring the digital asset back to the $6k range.

While this has yet to occur, the drop from $10,300 to $7,800 has given traders enough confidence to begin taking positions in altcoins.

Will Ether kick off a new altcoin season?

Given that Ether (ETH) is the largest altcoin by market cap, it seems reasonable to look to the asset as an indicator of how other large-cap altcoins might perform.

Last week Heath Tabert, the chairman of the United States Commodity Futures Trading Commission (CFTC) said that he believes Ether is a commodity and Tabert suggested that Ether futures trading would soon become a reality. BKCM CEO Brian Kelly also believes that the classification is highly bullish for Ether and Kelly said:

“The CFTC saying that Ethereum is a commodity is huge for the space. It gives us regulatory clarity. [...] That opens the door for institutions to come in. [...] Everybody is concerned, what if they ban it? [...] The CFTC said ‘we’re not banning it yet, we’re gonna regulate it,’ and now investors can say ‘Put them in my commodity bucket.’”

Let’s take a closer look at Ether to see what’s going on. 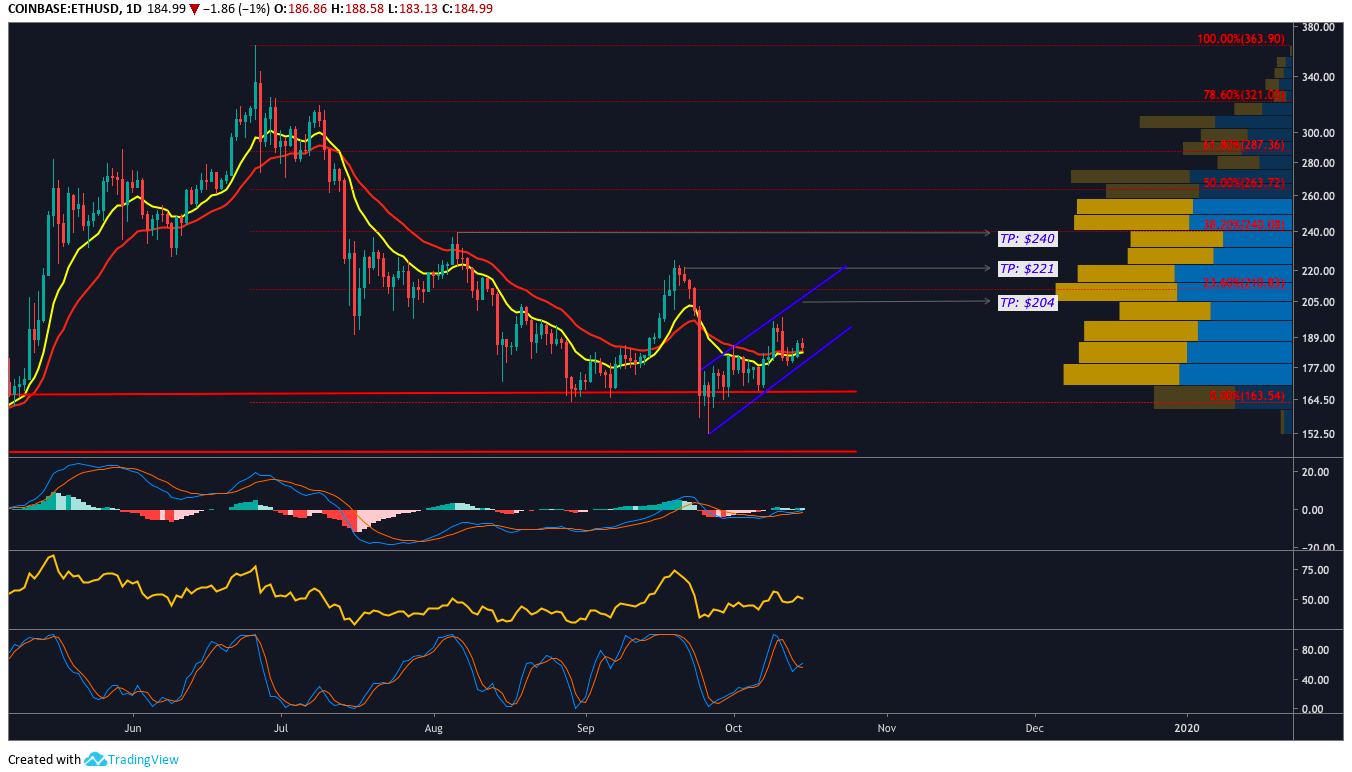 Since dropping nearly 32% to $152 on Sept. 26, Ether reversed course and began to climb within an ascending channel. The altcoin has bottomed at the $150 support 3 times since April 24 and currently, it has recovered nearly 23% of the ground lost since late September.

At the moment, Ether is trading above the 20-day moving average (MA) of the Bollinger Band indicator and reaching for the upper arm at $192. The 12 and 26 exponential moving averages (EMA) are on the path to converging on the daily time frame and the daily Stochastic RSI has also managed to converge in bullish territory. 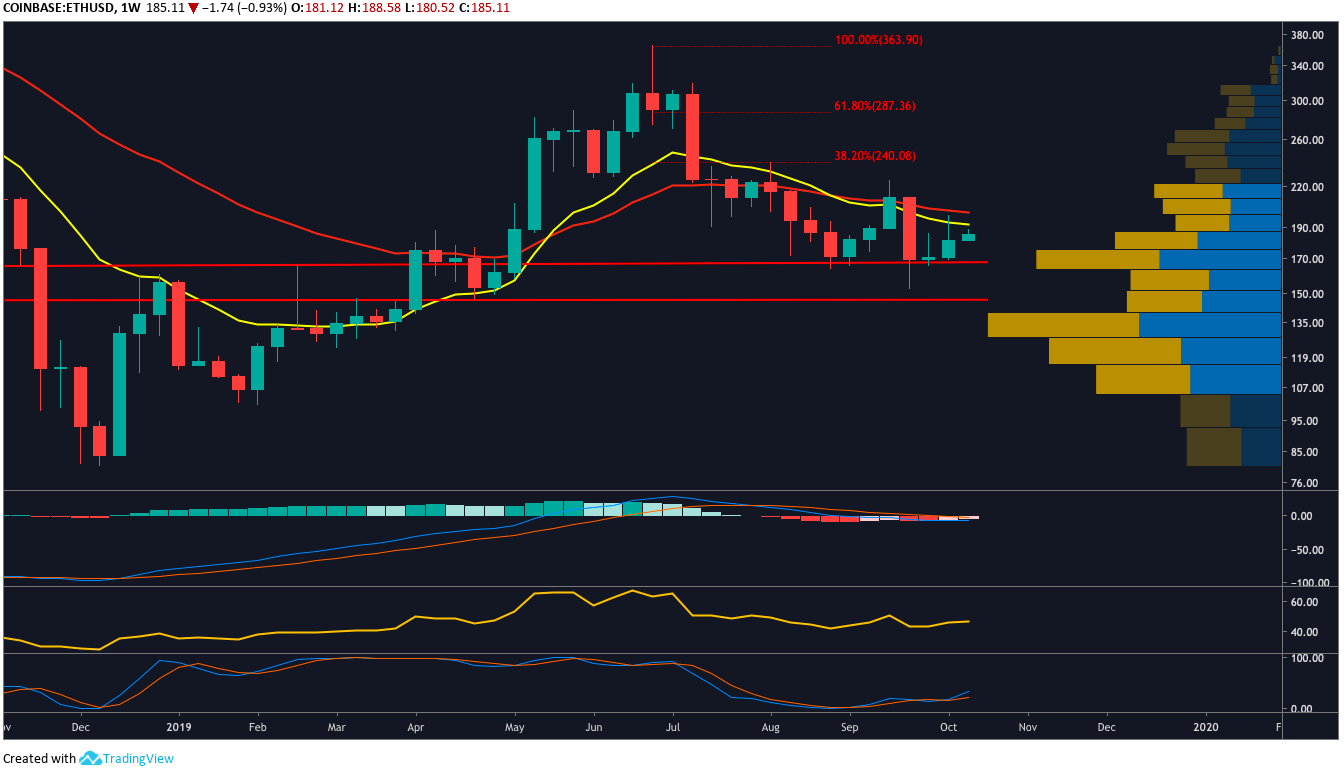 The situation is also much improved on the weekly time frame. Since reversing from $152, Ether has set consecutive higher lows and the Stoch crossed on Oct. 7 and is sharply rising toward 33.

The weekly Relative Strength Index (RSI) is also climbing toward bullish territory. Selling pressure has lessened over the past two weeks as shown by the shorter pink bars of the MACD histogram and the MACD is gradually curving up toward the signal line.

Ether price is still capped below the overhead moving averages and a move above this would set the price at slightly above $200. Traders should watch for a higher high being set at $215 which is merely $1 away from the 20-weekly moving average. 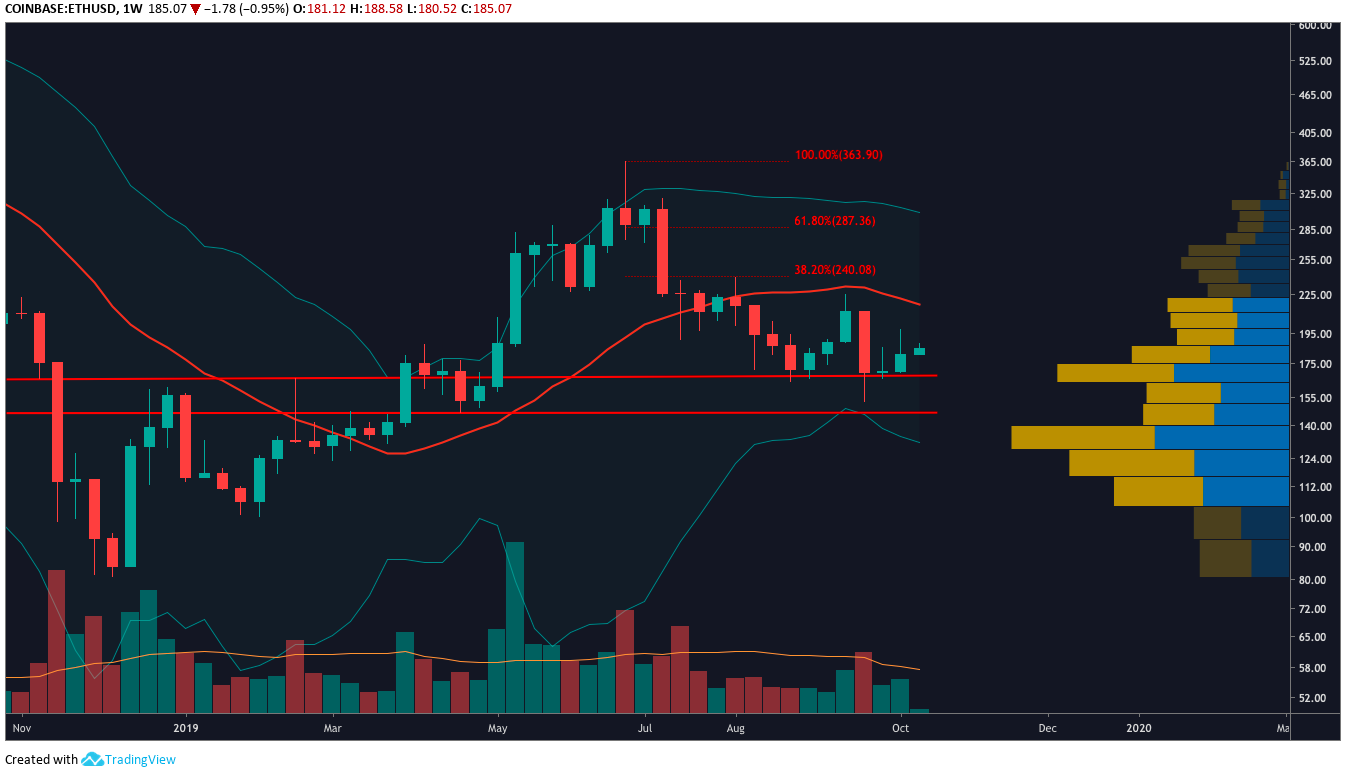 What about the ETH/BTC pair? 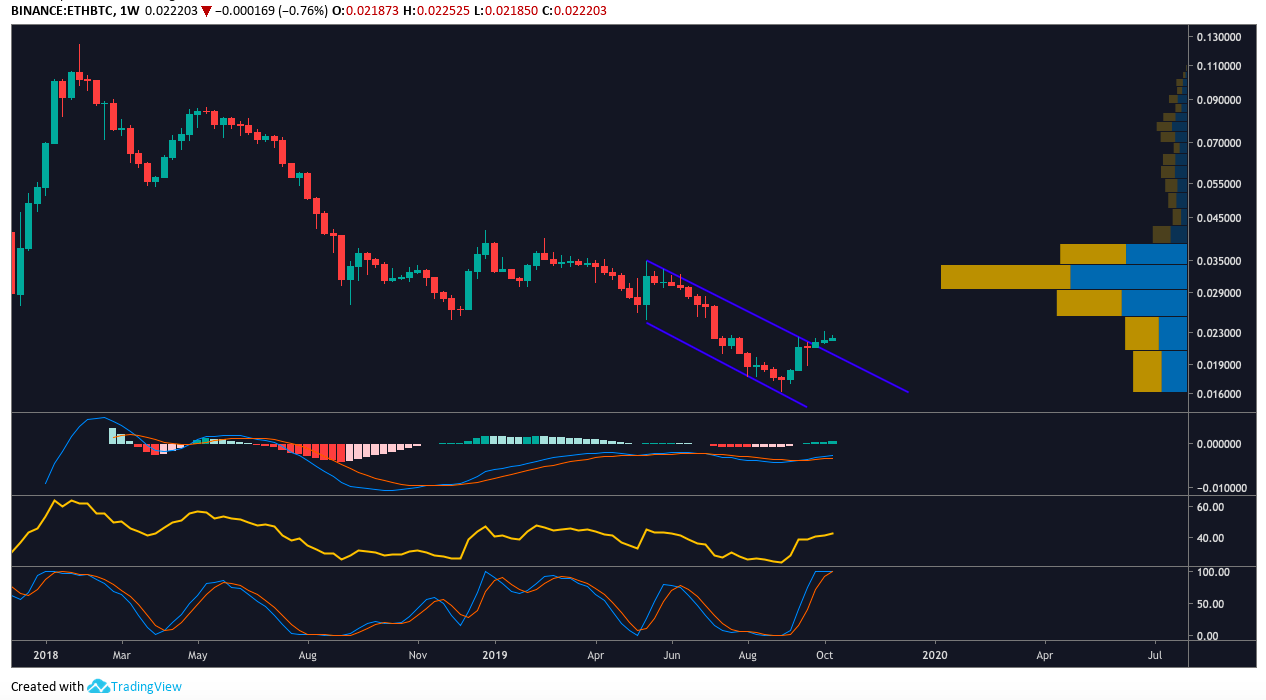 The ETH/BTC pair also shows the pattern of higher lows on the weekly time frame and the pair broke above the descending trendline nearly 3-weeks ago. As shown by the VPVR, Ether could rally up to 0.029521 satoshis (sats) for a 31% gain before running into strong selling pressure.

Similar to the weekly chart, this point also aligns with the upper arm of the Bollinger Band indicator and at the time of writing the ETH/BTC pair is actually pressing right against the 20-MA of the indicator.

Despite Bitcoin’s current prolonged consolidation giving a bearish tilt to its price action, Ether looks enticing on both the USD and BTC pairing. There are good intraday and swing trades to be had on both pairs and traders are encouraged to use a stop loss.

A relatively effortless trading plan would involve taking 25% of profits at $204 which aligns right with the overhead ascending channel trendline and is a 9.6% gain from the current price of $185.50.

As mentioned earlier, above $240 the selling pressure alleviates on the VPVR and traders could move their stops up and let the remaining 25% run in hopes of knocking out $305 which aligns with the upper arm of the Bollinger Band indicator on the weekly time frame.

Above $305 it’s pretty much a blue sky breakout and Ether will be looking to retake the 2019 high at $364 if the price continues to run.

Traders are encouraged to keep an eye on the daily and weekly time frames on the ETH/USD and ETH/BTC pairing. Given that Bitcoin currently has a slight bearish bias spot and margin traders should definitely remember to use a stop loss when trading Ether.