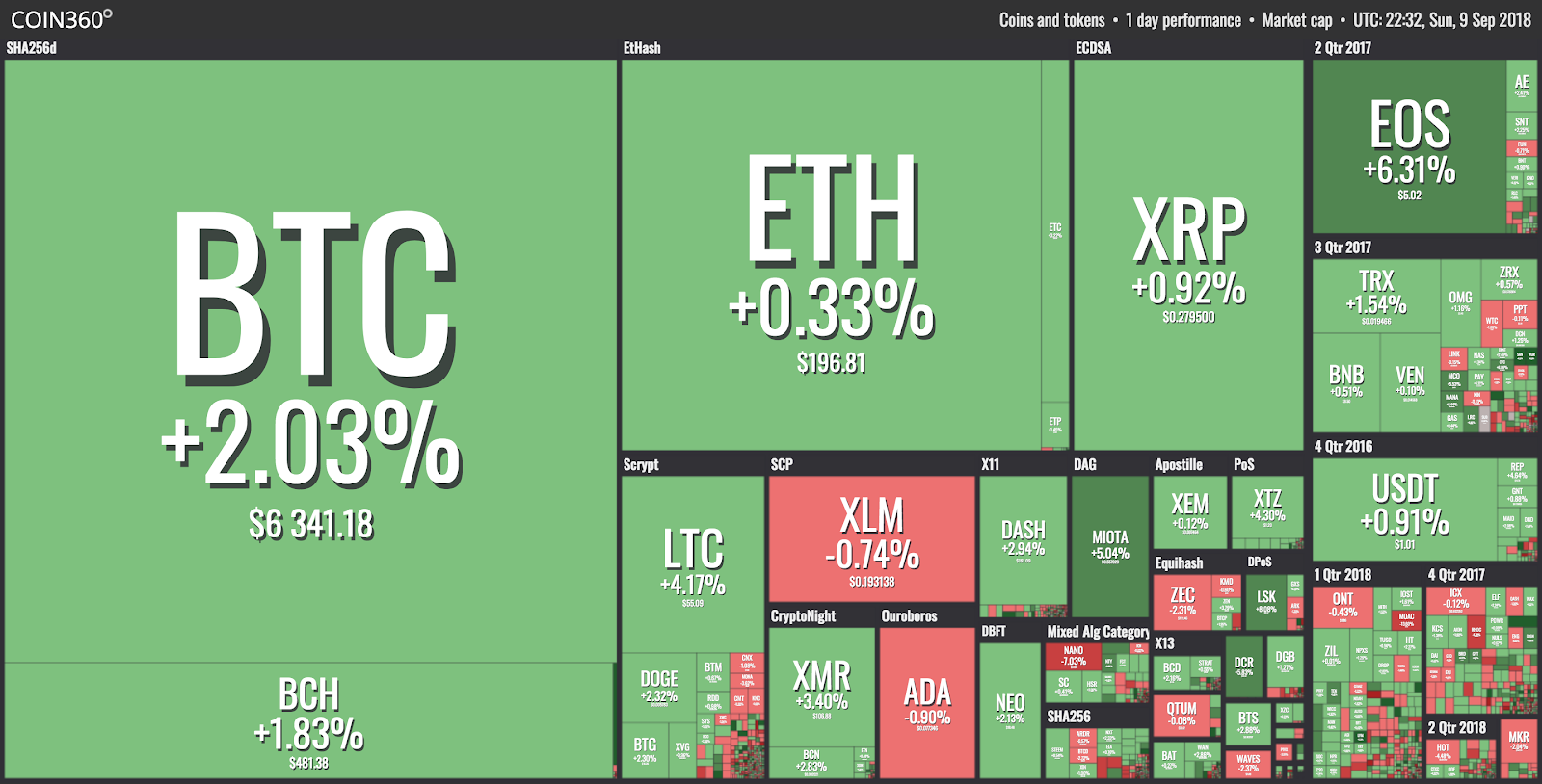 Bitcoin (BTC) jumped over 3 percent in under an hour today, proceeding to trade sideways just under the $6,400 mark for several hours, before dropping again in the hour to press time.

At press time, Bitcoin is up about 1 percent on the day to trade at $6,241, according to Cointelegraph’s Bitcoin Price Index.

On the week, Bitcoin is now down 13 percent, holding fort with 0.64 percent gain on its monthly chart. 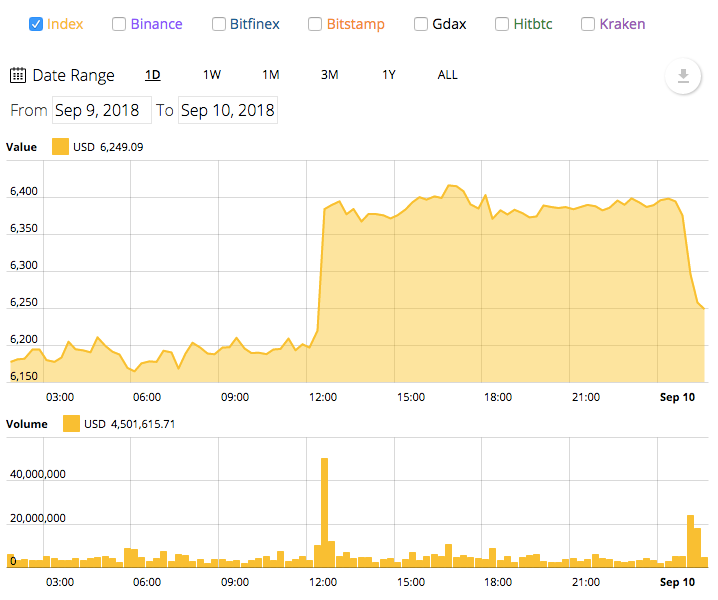 Ethereum (ETH) also saw a sudden price spike today, regaining the $200 price point for several hours before slipping back below it. Ethereum dipped under the $200 price point this weekend for the first time since November 2017, and is trading around $194 at press time.

At the start of the month, Ethereum had broken through the $300 threshold, but the altcoin has continued to shed value since its major plummet September 5.

On its weekly chart, Ethereum is down over 34 percent, with monthly losses around 45 percent. 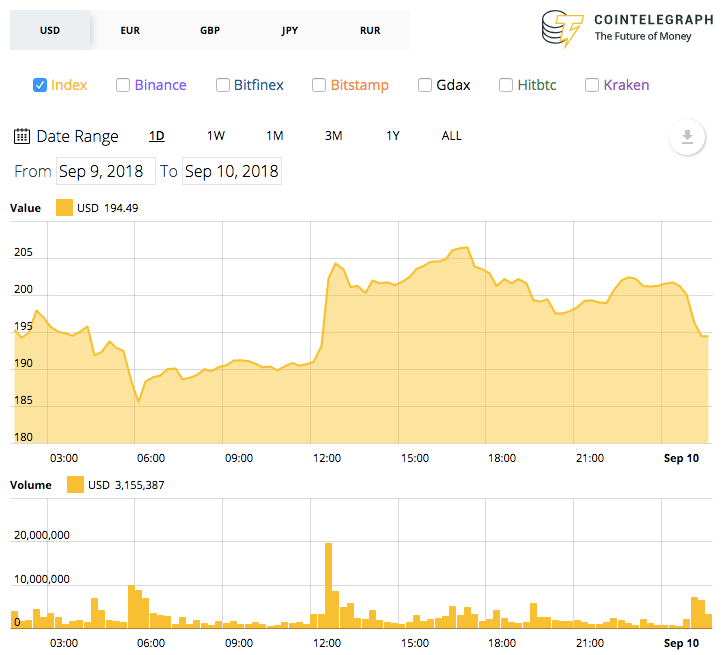 Among the other top ten coins on CoinMarketCap, only three are in the red, and only slightly, with the rest seeing 1 to 6 percent growth on the day. Altcoin Stellar (XLM), ranked 6th by market cap, is down the most and only just, seeing a little over 1 percent losses on the day.

EOS (EOS), ranked 5th, is seeing the most growth among top ten cryptos today, up 5 percent on the day to trade at around $4.95. Today’s growth, however, has simply reclaimed some of the ground EOS lost in a further price dip yesterday, September 8. 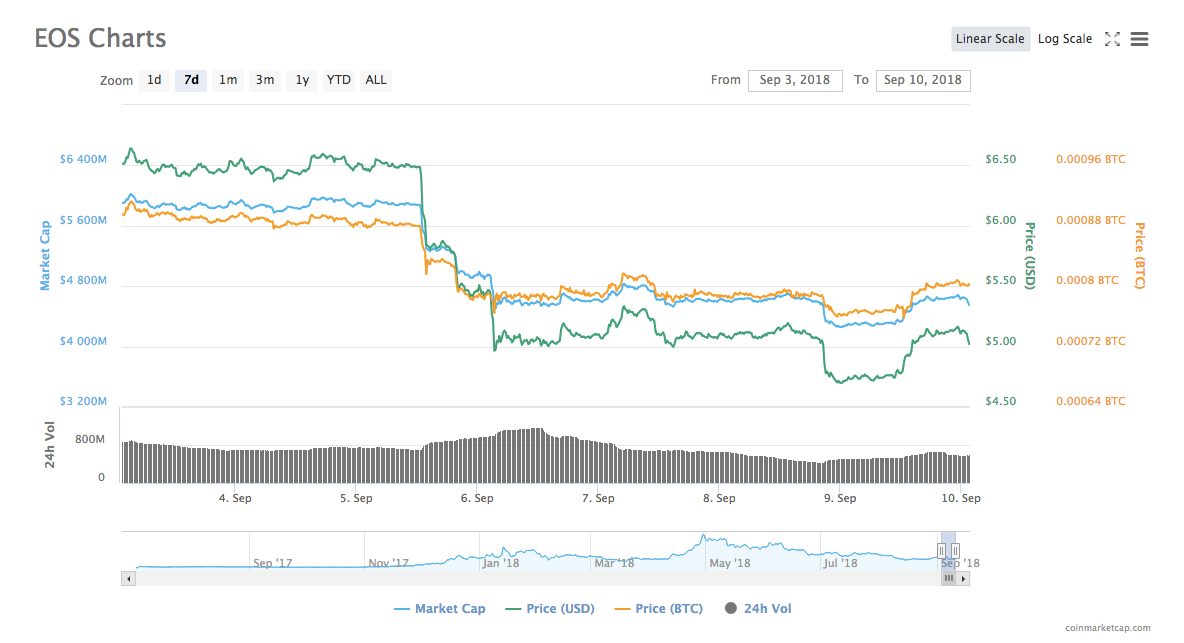 Litecoin (LTC) has also seen relatively solid growth on the day, up 4 percent to trade at $55.10.

Among the top twenty, coins are also seeing mostly green, with the two coins in red down less than 1 percent. Altcoin IOTA (MIOTA) is another relatively strong top twenty player, up 5.41 percent on the day to trade at around $0.559.

Despite the market’s sudden surge today, total market capitalization of all cryptocurrencies is still dropping, currently around $195.5 billion at press time. The current figure is down $44.7 billion from its intraweek high at around $240.2 billion.

In an interview with Bloomberg September 8, Ethereum (ETH) co-founder Vitalik Buterin said he believes that explosive growth in the crypto space is “getting close to hitting a dead end,” now that the initial work to raise crypto and blockchain awareness has largely been done:

“If you talk to the average educated person at this point, they probably have heard of blockchain at least once. There isn’t an opportunity for yet another 1,000-times growth in anything in the space anymore.”

While speculative price surges may be a thing of the past for Buterin, he pointed to the promises of the crypto space entering a stage devoted to “real applications of real economic activity.”