YouTube, one of the most popular social media platforms for video sharing, has aggressively started deleting cryptocurrency-related content from some of the biggest influencers in the industry.

YouTuber Chris Dunn, whose channel has over 210,000 subscribers, noticed on Monday that the platform had removed all of his videos that mentioned cryptocurrencies.

Following this, Dunn tweeted, "@YouTube just removed most of my crypto videos citing 'harmful or dangerous content' and 'sale of regulated goods'... it's been 10 years of making videos, 200k+ subs, and 7M+ views. WTF are you guys doing @TeamYouTube?!" 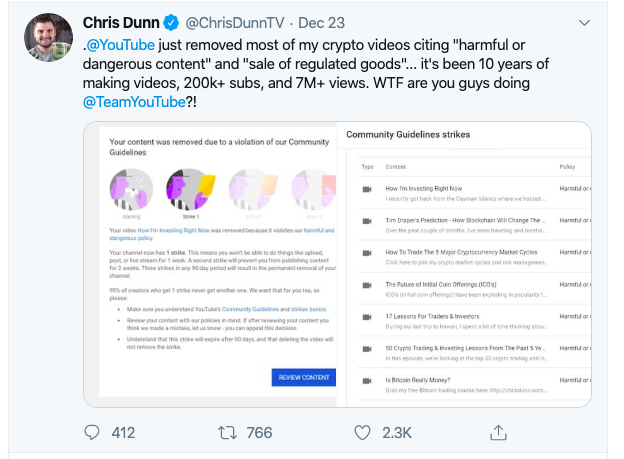 Dunn hasn’t been the only YouTuber affected by the platform’s sudden ban. On Dec. 24 — Christmas Eve — Robert Beadles, host of YouTube channel Crypto Beadles with over 89.3 thousand subscribers, tweeted that YouTube had shut him down temporarily.

While it appears that the Crypto Beadles YouTube page is up and running again, some influencers haven’t been as lucky.

YouTuber Ivan on Tech, whose channel has more than 210,000 subscribers, has also been affected by the ban. His account received one strike and he has set all of his videos to private "as a precaution." He told Cointelegraph:

A Tweet sent out on Dec. 24 by Omar Bham (@crypt0snews) shows an updated list of all the YouTubers who have recently had their crypto-related content banned from the platform. 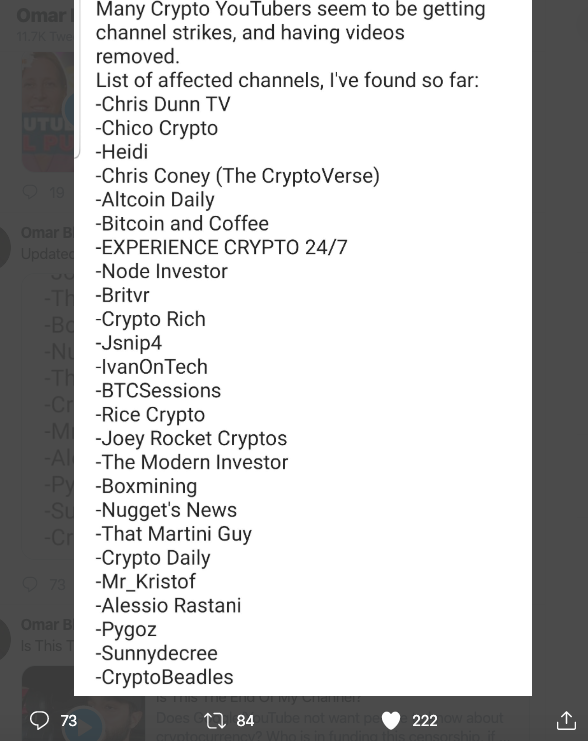 YouTube has not yet released a public statement on why they are banning crypto-related content. The video giant, a Google subsidiary, did not responded to Cointelegraph’s request for comment. This story will be updated if YouTube responds.

The lack of communication from YouTube has left influencers to speculate on the reason for the sudden crackdown.

Shortly after sharing the updated list of accounts that have been affected by YouTube’s ban, Bham tweeted that it seems YouTube is deleting crypto channels with links to external websites or exchanges listed in video descriptions.

“It seems that a reason why YouTube would have to go after crypto channels is any links to external websites/exchanges in video descriptions.”

Although this is an assumption, Bham may be onto something.

For instance, YouTuber Rachel Siegel manages Crypto Finally, a YouTube channel with 2.54 subscribers. Siegel told Cointelegraph that she has not been affected by YouTube’s ban on cryptocurrency-related content:

“I have not personally been affected by the apparent ban on cryptocurrency videos on YouTube, however, I think it is clear that this is some sort of targeted attack. Tech censorship has been getting a lot of public spotlight lately, and as we continue to grow as an industry I can expect we will continue to see more mass bans and crypto content takedowns.”

Siegel confirmed that she does not link to external websites or exchanges in any of her videos.

“I once referenced Coinbase, but took that down,” said Siegel.

Interestingly enough, while some YouTube channels have not yet been censored by the platform, reports continue to flood Twitter on channels that have been impacted.

@TheMoonCarl recently tweeted, “The YouTube purge has now reached my channel! One video from 27th of January 2019 "broke the rules" because it was "Harmful and dangerous content". Sure, #Bitcoin is harmful and dangerous for the banks, but this is just ridiculous.”

“I hope this is a mistake by YouTube, because if not, then this is censorship in its purest form. Big YouTubers have seen their videos deleted. These videos did nothing more than educate people about the power of Bitcoin. It’s only a matter of time until my channel is attacked.”

The below tweet, which was posted 18 hours ago at press time, said that YouTube will be looking into the matter, with an update to come soon.

No further updates have yet been released from @TeamYouTube on Twitter.

Regarding the matter, Bham told Cointelegraph, “That thread with Team YouTube was the extent of any direct responses that I've heard of. Team YouTube last updated us by linking to the regular YT community guidelines, and a reminder that we can appeal videos with a strike. Several YouTubers appealed, and had their appeals rejected, with no clear reason again as to why the video directly violated guidelines.”

Will An Alternative Emerge?

For example, LBRY is a sharing platform that uses blockchain technology to allow users to publish content and get paid. LBRY helps its users monetize their published material with its built-in payment system.

Monetization is also a critical aspect for many YouTubers. Recent statistics show that a number of YouTube channels generate six figures each year, an amount that is increasing by 40 percent every year.

According to Bham, who has been uploading crypto-related content to his YouTube page since 2016, a channel hit with a strike such as this may be unable to livestream for up to 90 days, heavily impacting a user’s income.

“As far as income, even with a successful appeal, a channel hit with a strike may be unable to livestream for up to 90 days,” Bham told Cointelegraph. “This has happened to me, and plummeted my income, since I relied heavily on real time engagement for my shows.”

However, while LBRY offers a monetization system and a YouTube platform that lets YouTubers republish their content to the LBRY network, the platform is still not being utilized by many YouTubers just yet.

Naomi Brockwell, Host of YouTube channel NBTV, which has more than 30,000 subscribers,, told Cointelegraph that while she was not affected by the YouTube ban, she believes it is time to start looking at decentralized platforms like LBRY:

“I haven't been affected by the youTube ban yet, but I would just add that we've had alternative decentralized platforms like LBRY for a long time with limited support from youtubers. Hopefully this is a wakeup call.”

However, some YouTubers who use decentralized platforms like LBRY have pointed out that their audience is limited on these channels, as most already have an understanding about cryptocurrency and blockchain.

“In addition to YouTube, many creators including myself are using decentralized content platforms such DTube, Steemit, Minds, LBRY, Bitchute & Bittube, explained Siegel of Crypto Finally. “While these platforms do solve the issue of censorship and takedowns of our content, it unfortunately still does limit our audiences. Meaning it limits everyday people from getting involved in crypto in the first place,”

Moreover, while audiences are still limited on emerging decentralized platforms, there are other challenges that still need to be addressed. Privacy rights, regulations, copyright protection and more must be resolved before serious YouTubers migrate their content to these platforms.

Changpeng Zhao, the founder and CEO of cryptocurrency exchange Binance, chimed in on Twitter about the dilemma, saying, “It may be time the crypto community take a stab at its own blockchain-enabled sensorship-resistant social media platform. Lots of challenges though, spam, scam, trolls, incentives, copyright, token economics, governance, stickiness, privacy… But It’s about time!” 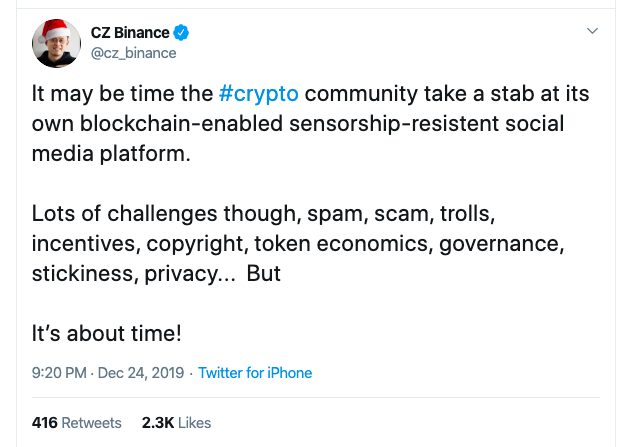