Cryptocurrency hardware wallet Ledger Nano S has made the top ten bestselling items in Amazon’s computers and accessories department. The wallet, costs just under $80 on Amazon.com, currently stands at number 8 in the retail giant’s listings.

Ledger beats major rivals such as Trezor and KeepKey, which came in at 133 and 231 in the rankings respectively. 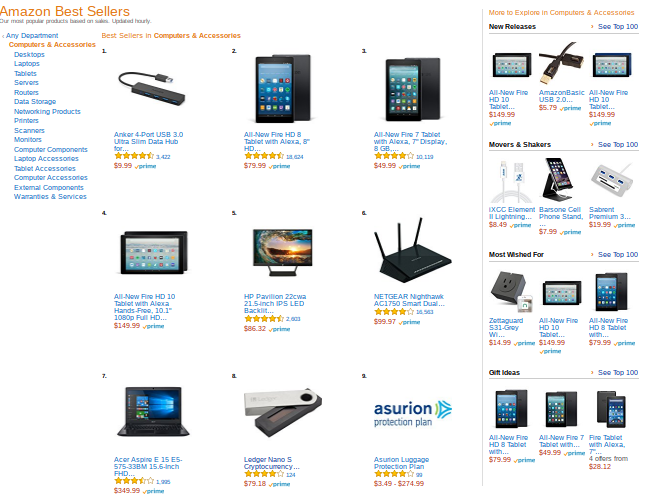 The findings caught the attention of the cryptocurrency community Wednesday after being posted to Reddit by user u/hunk_quark, who suggested they were a good indicator of digital currency’s push towards mainstream adoption.

Hardware wallets have received considerable publicity over the last year as exchange hacks and other security compromises become widely known by increasing numbers of users. Aside from offering superior protection against theft compared to other wallets, hardware options offer digital currency holders a simpler way to access the several forks that Bitcoin has undergone, or will face, by November.

Web wallet providers retain the right not to support forks or do so at their leisure as witnessed with Bitcoin Cash, with users of Blockchain.info wallets still waiting for easy access to their new coins.

Competitor Trezor has also experienced strong sales, if not through Amazon, as evidenced by their running out of stock several times this year, with units being resold unofficially at considerably inflated prices.