Yield farming is driving a boom in DApp and DeFi use, but user experience improvements will be key for future adoption in the next five years.

From CryptoKitties to Compound, decentralized applications and decentralized finance have become increasingly popular in the blockchain space, but the sector has gone through a fair share of teething problems since DApps first appeared in 2017.

DApps were popularized around the same time that Bitcoin (BTC) experienced a monumental surge in value toward the end of 2017. Ethereum quickly established itself as the protocol of choice for blockchain developers to build and launch DApps, and the success of projects such as CryptoKitties proved that people were actively looking to get involved in the space. CryptoKitties was so popular at the time that the Ethereum network took major strain due to the influx of users and subsequent transactions for the crypto collectibles.

In the three years since those lofty highs and public hype, there hasn’t quite been the same level of fanfare around DApps. This is understandable given the sheer amount of public interest that went into the cryptocurrency and blockchain space in 2017, but it doesn’t mean that the DApp space has waned.

In fact, the latest market report released by Dapp.com shows that the overall user base of DApps and DeFi platforms on Ethereum increased by nearly 100% in the second quarter of this year. 1,258,527 active DApp users is an all-time high for the Ethereum ecosystem.

It would be remiss not to mention that Ethereum is not the only blockchain protocol powering decentralized applications: EOS, Tron, Neo and Steem sit alongside Ethereum as the biggest blockchain-based platforms that allow the development and running of DApps, according to Dapp.com. All of these platforms have an important role to play in the proliferation and continual development of decentralized applications, as more companies and developers begin to explore the possibilities of the technology.

Positive trend for DApp use

Cointelegraph reached out to Dapp.com to get an accurate set of data on the number of DApps and their users since platforms such as Ethereum allowed for their development. Kyle Lu, CEO of Dapp.com, shared data and charts that show the trend of DApps being deployed on Ethereum alongside the number of users: “You could see that it is a good trend of usage climbing as more dapps were built and more users are engaging.” 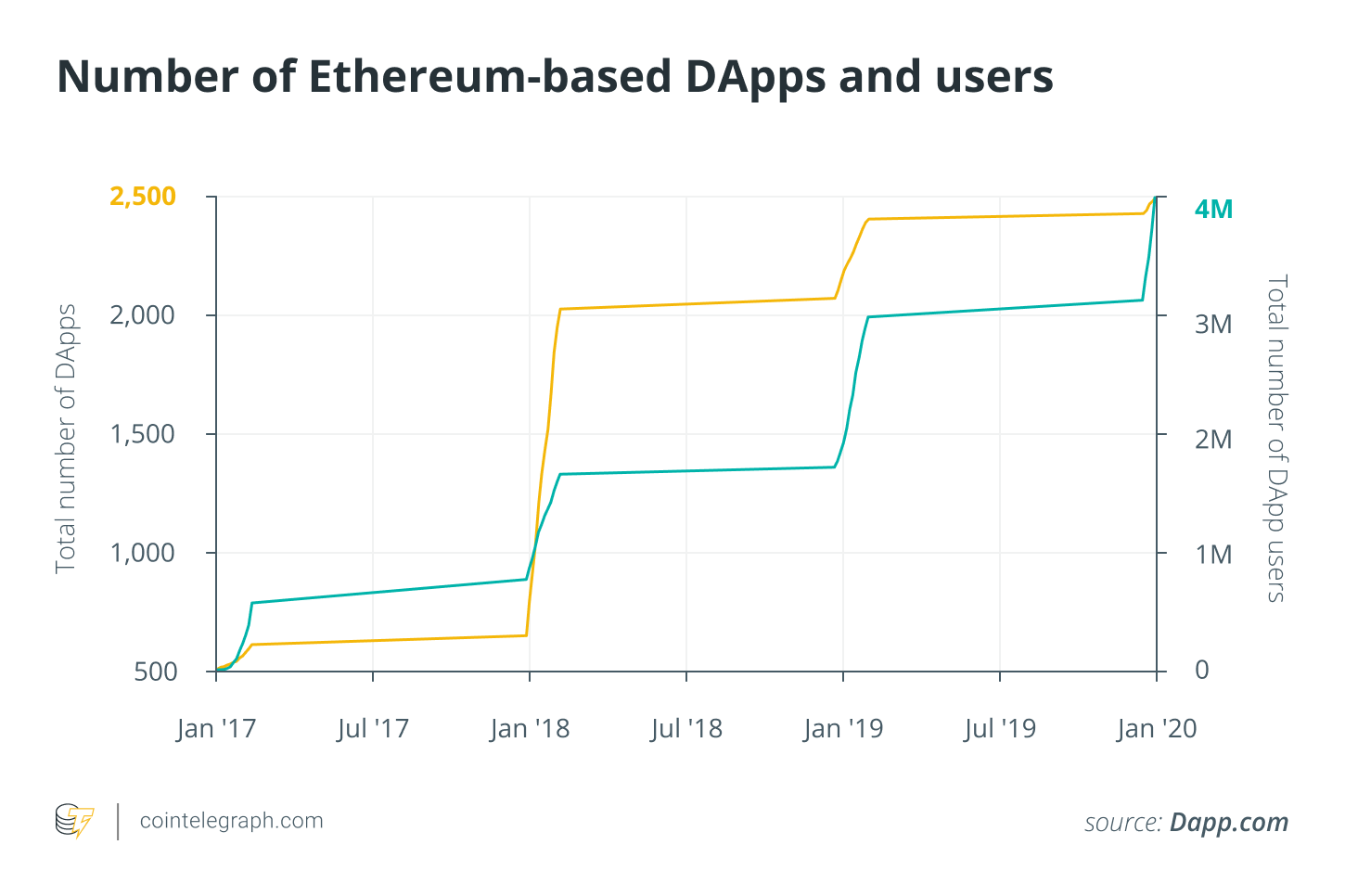 The cryptocurrency and blockchain space has gone through plenty of change since 2017, and a number of factors had an effect on the development and proliferation of DApps. Lu believes that new use cases by businesses built on the technology is a major reason for the continuous uptick of users:

“We’ve been monitoring the whole DApp market since 2017. A main reason driving interest and usage of DApps is innovation of business models — all the ’hype’ in the DApp area is driven by businesses and products delivered in a way that people haven’t seen before.”

Lu highlighted a number of projects that have legitimized DApps and driven interest in their use and development. In the fourth quarter of 2017, Lu identified CryptoKitties as a “unique digital asset put on blockchain for the first time.” In 2018, Blockchain-based games that use NFTs and offer play-to-earn features were a big driver of interest. He also highlighted Fomo3D, a “transparent ponzi scheme” built on blockchain, as well as TRONbet (now known as WINk), which is a blockchain-based gambling platform with transaction mining.

Jon Jordan, communications director at DappRadar, told Cointelegraph that the boom in interest in 2017 was driven by a peak in cryptocurrency market values across the board. CryptoKitties was once again recognized as a factor, in addition to the launch of decentralized exchanges such as Idex and ForkDelta. The emergence of platforms such as Tron and EOS also played a big part in the development of the ecosystem.

But there was also a downside for Jordan, as according to him, most DApps “were quickly thrown together to make a buck, and most are now inactive.” He added: “The drop in crypto prices in late 2018 also had an impact across all dapp developers and resulted in many underfunded teams dropping out of the space.” According to Jordan, 2019 was the year for gambling DApps on Tron and EOS, while DeFi applications began to gain traction later in the year:

“More importantly on Ethereum mid-to-late 2019 was the stage at which DeFi dapps — notably MakerDAO, Uniswap, Kyber etc — started to gain traction. By the time MakerDAO relaunched DAI with multi-collateralization in November, most of the building blocks were in place for what we now see — a vibrant DeFi ecosystem that is attracting billions of dollars of value through novel interactions between dapps.”

DeFi has become increasingly popular in 2020 due to users trying to maximize yield farming, as Lu and a number of other experts highlighted to Cointelegraph. The Dapp.com CEO directly attributed the second-quarter spike in users to yield farming and an increase in users on the Compound decentralized lending platform: “Yield farming has created a strong boost for Ethereum token holders to stake their assets in DeFi dapps for interest return.”

Jordan echoed Lu’s comments that yield farming is a major reason for the boom in users in the second quarter, unpacking the phenomenon in a conversation with Cointelegraph and giving his opinion on what is drawing so many users to the DApp ecosystem:

“During Q2, usage has clearly been driven by the ability to generate a lot of value by the Yield Farming of new tokens such as Compound’s COMP token. [...] It’s no surprise that a lot more people are now using Compound because this is effectively free money being given away when you use it. Compound usage in June was up 4x compared to April.”

Vadim Koleoshkin, co-founder of DeFI service provider Zerion, believes that yield farming may have drawn in a swathe of new users, but the utility of DApps and DeFi platforms has led to retention of these users:

“Yield farming in DeFi attracted a lot of users. A large portion of the new users came for the yield but ended up staying for the convenience in managing their money in a decentralized manner. There are also a few games and gambling websites with a large number of users. Data, privacy concerns, and lack of access to financial services worldwide will drive the adoption of a new type of apps built on the decentralized stack.”

There seems to be a unanimous belief that the future growth of DApps and DeFi is dependent on improvements to user experience, ease of access and functionality. Dapp.com’s Lu believes that developers have been focusing on creating easy-to-use, friendly applications. In the past, users may have been daunted by the complexity of DApps and their features: “With all those improvements made, mass adoption is just a matter of time when we have more innovative products being launched.”

Jordan offered a similar take on the challenges facing DApp developers and companies, pointing out two key areas that have been a particular sticking point: Products need to be “as good and accessible as traditional web products and also have all the advantages of using a blockchain.” He added:

“Onboarding users in a streamlined way has been the second major challenge, although this has now been fixed by new ways of ensuring security and account recovery while also remaining non-custodial.”

Koleoshkin said that paving a smooth road for new users to explore and begin using these decentralized platforms is key. However, there are still some barriers to entry that make it difficult for people who are unfamiliar or completely new to the blockchain and cryptocurrency space:

“New users not only need to have a wallet or extension installed, but they also need to know how to use it properly with Dapps. Once this initial hurdle is overcome, the overall experience becomes much more accessible and intuitive.”

Speaking at the digital conference Unitize on July 9, Richard Ma, co-founder and CEO of Quantstamp, highlighted security concerns as a major hurdle facing DApps and DeFi applications. Ma cited the theft of $26 million from various projects this year as a cause for concern. In order to combat this, Ma said that “it’s crucial to have proper security ahead of time.”

It’s clear to see that a large number of users in the blockchain space have realized the value of DApps and DeFi, and this has only been accelerated in 2020. The future of the space certainly looks promising, but what it will morph into is subjective.

Jordan believes that in the next five years, people might not even realize they are using platforms that are powered by blockchain technology: “My view is that we’ll see a big jump driven by consumer-facing Dapps that don’t require any blockchain knowledge, and don’t even promote themselves as using blockchain.” He added that new blockchain platforms will transform users’ experiences, from “Eth 2.0 to Cardano, Flow (from CryptoKitties dev Dapper Labs), Near and Harmony.”

Koleoshkin went as far as saying that the term DApp might not even be used in a couple of years. This is mainly due to the fact that “Dapps are a separate category of apps leveraging native payments functionality, distributed storage, and smart-contracts functionality. More developers will use these tools to build a better user experience, but they wouldn’t be called a DApp.”