DeFi-Nitely a Bubble? Seller Blamed as COMP Crashes 45% on Coinbase

A frenetic day of trading on Coinbase Pro saw unusual activity from what seems to be an early investor in Compound, which briefly hit $427.

The rapid growth in the price of so-called decentralized finance (DeFi) tokens is raising fresh suspicions after one altcoin hit $427.

Compound, an ERC-20 altcoin on Ethereum, launched on U.S. exchange Coinbase Pro this week. No sooner had trading begun, however, did selling pressure mount to produce wild volatility.

In particular, an entity assumed to be an early investor in COMP began sending huge numbers of tokens to Coinbase.

The identity of the destination address remains uncertain, but according to detective work by Galois Capital, the movements are indicative of an organized sell-off. Thereafter, COMP/USD fell from highs of $427 to press-time levels of under $235.

“Looks like this investor has another ~25000 or possibly ~87500 COMP if you go backwards one hop on the chain,” Galois added, linking to another target address.

“Would be interesting to see if any of it moves to @coinbase .  Probably indicative of short term selling pressure.” 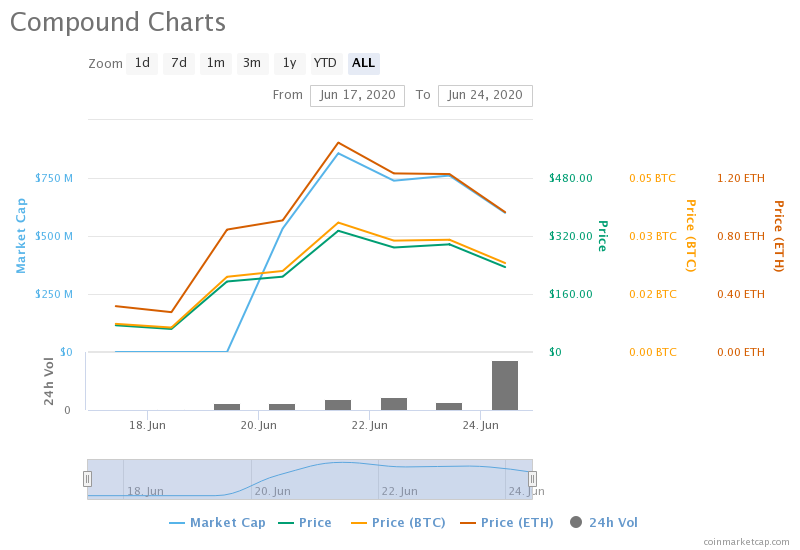 While COMP clearly fits the description of a short-term bubble induced by Coinbase listing it, reservations about DeFi as an ecosystem have been rising.

This week alone, fellow DeFi token Balancer (BAL) surged over 200% on the back of its mainnet announcement.

As with interest in initial coin offering (ICO) tokens and then stablecoins, huge numbers of projects suddenly appearing, along with sudden jumps in the value of their in-house cryptocurrencies, is fueling concerns that the market itself is overwhelmingly speculative.

Others noted that unlike the ICO phenomenon, Ether (ETH) has yet to benefit from the token boom.

“This time an Ethereum use case is going parabolic (DeFi) but ETH is missing in action.”

As Cointelegraph reported, even legacy tokens such as Bancor (BNT) and Maker (MKR) have seen double-digit gains over the past week.