Ethereum creator Vitalik Buterin clashed with a Bitcoin developer on Twitter when he told him that Bitcoin wasn’t always ‘digital gold’.

Ethereum co-founder Vitalik Buterin was involved in a spat with a Bitcoin developer on Twitter yesterday, when he suggested BTC was originally designed to be P2P cash, not digital gold.

Replying to Blockstream employee Zack Voell who claimed that Bitcoin was, is, and always shall be digital gold, Buterin pointed out the narrative had changed since 2011:

“I joined Bitcoin land in 2011 and back then I remember a clear vibe that Bitcoin was P2P cash first and gold second.” 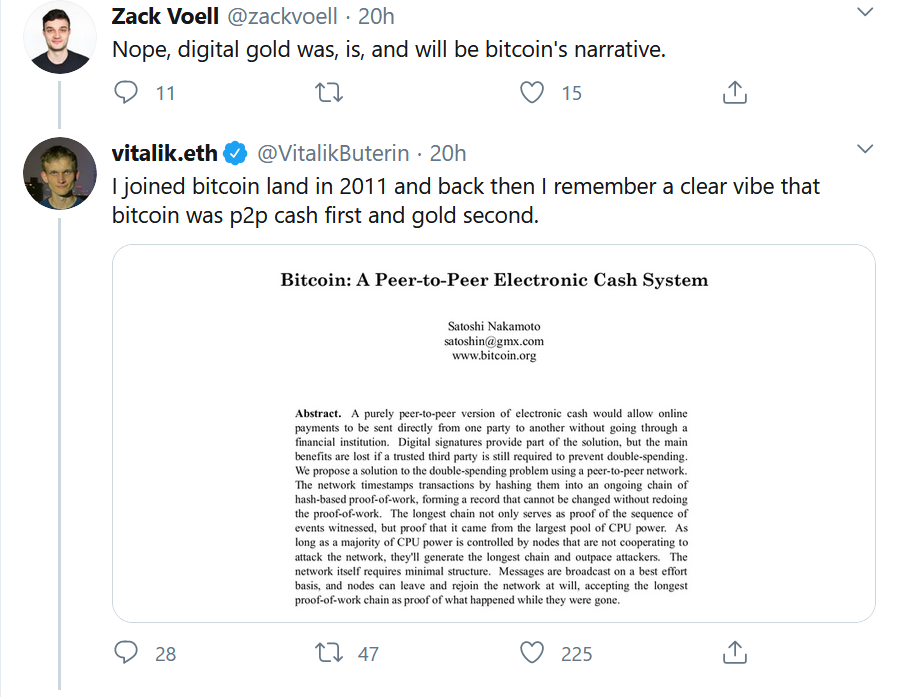 Buterin’s view that Bitcoin was originally intended to be peer-to-peer electronic cash is one shared by many and is backed up by the very title of the Bitcoin whitepaper, published by Satoshi Nakamoto in 2008.

Indeed, the first line of the Bitcoin whitepaper reads: “A purely peer-to-peer version of electronic cash would allow online payments to be sent directly from one party to another without going through a financial institution.”

Why the digital gold debate matters

The conflict between the two views arises when one considers the difference between P2P cash, and digital gold.

Gold, while scarce and valuable and is unwieldy as an everyday transactional currency. It can’t be carried or divided easily, and is practically useless for micropayments, unless managed and overseen by a giant centralized network of processors and sorting offices (banks). In such a scenario, high transaction fees arise as a matter of course.

P2P cash on the other hand is exactly what it sounds like: a currency that can be transacted between two people without the need of an intermediary.

In practice, these philosophical differences manifest in the form of the Bitcoin block-size debate. The refusal of Bitcoin developers to increase the block size in order to scale on-chain resulted in high transaction fees, and prompted a sizable chunk of the community to hard fork the code into a new chain — Bitcoin Cash (BCH).

Today, Bitcoin fees are now among the highest in the cryptosphere. On March 1st, the average transaction fee was $0.40. By March 20th, it had risen to $1.76, according to data from Bitinfocharts.

In the past 24 hours, average BTC transaction fees were anywhere between 617% and 645,900% higher than other major cryptocurrencies (ETH and XRP respectively).

However, supporters of the digital gold narrative accept Bitcoin’s high fees and see it as a manifestation of the network’s high security which comes from Bitcoin’s dominant hashrate. High fees are more acceptable to users of ‘digital gold’, since they usually transact in larger amounts.

Likewise, Buterin accepts the reality of BTC’s high fees, and suggests that now the digital gold use case has been established, people should simply use a different cryptocurrency for other use cases:

“It was a controversial pivot executed without many participants' consent. It's certainly reasonable to be upset about it, though yes, now the pivot has happened, and if you don't like it you should just use one of the other blockchains whose community expresses different values.”

More than 11 years on from the mining of Bitcoin’s genesis block, Satoshi Nakamoto’s original blueprint has been interpreted, re-interpreted, and built upon by numerous individuals, entrepreneurs and would-be pioneers.

The beauty of blockchain mechanics is such that philosophical differences can be resolved practically, in the form of hard forks. The insistence of Bitcoin Core developers to keep the block size low, and maintain the digital gold narrative, has probably inspired more hard forks and more altcoin launches than any other phenomena in crypto —  barring greed.