Is Blockchain About to Become a Patent War Battleground?

As blockchain technology continues to be one of the most discussed things in 2018 and a subject for mass adoption, the number of crypto-related patents is steadily growing — and with patent trolls joining the game, a legal war over blockchain might occur in the future.

Why do institutions need blockchain patents?

A blockchain patent, like any other patent, is a set of exclusive rights issued by an official authority — a sovereign state or intergovernmental organization — that an inventor or assignee gets in exchange for revealing their invention to the public. For instance, in the U.S., patents are granted by the U.S. Patent and Trademark Office (USPTO). Although there are no “international patents,” per se, according to the Patent Cooperation Treaty (PCT) signed by 152 countries, by filing one international patent application under the PCT, applicants can simultaneously get protection for their inventions in many countries.

The first mentions of blockchain and cryptocurrency-related patents appeared around 2012, according to USPTO database. During the 2012-2015 period, in the U.S. alone, institutions had amassed at least 83 patent applications that contained words like “cryptocurrency” and “blockchain” in their forms. Consequently, that number has escalated even further since, as Bitcoin became the market’s favorite buzzword and ascended into the mainstream: In 2017, there were 97 blockchain patents filed in the U.S., as per the Financial Times (FT), which is more than all the previous years combined. Bloomberg Law data suggests that the patent office has published about 700 blockchain-related applications it received between January 2011 and April 2018. It is worth noting that it takes about 18 months for the patent office to issue a received application.

2018 might turn out to be even more fruitful in terms of blockchain patent applications, as blockchain has been widely branded as the most discussed technology of the moment: Indeed, according to Fortune’s sources, the overall number of blockchain-related patents and applications for the next year “is expected to be around 1,245.”

However, the U.S. isn’t even the leader in that area. In 2017, China filed 225 of the blockchain patents (half of all the 406 blockchain-related patent applications made that year, according to the World Intellectual Property Organization database, cited by FT) having severely outnumbered the rest of the world — after all, China made it a national priority. 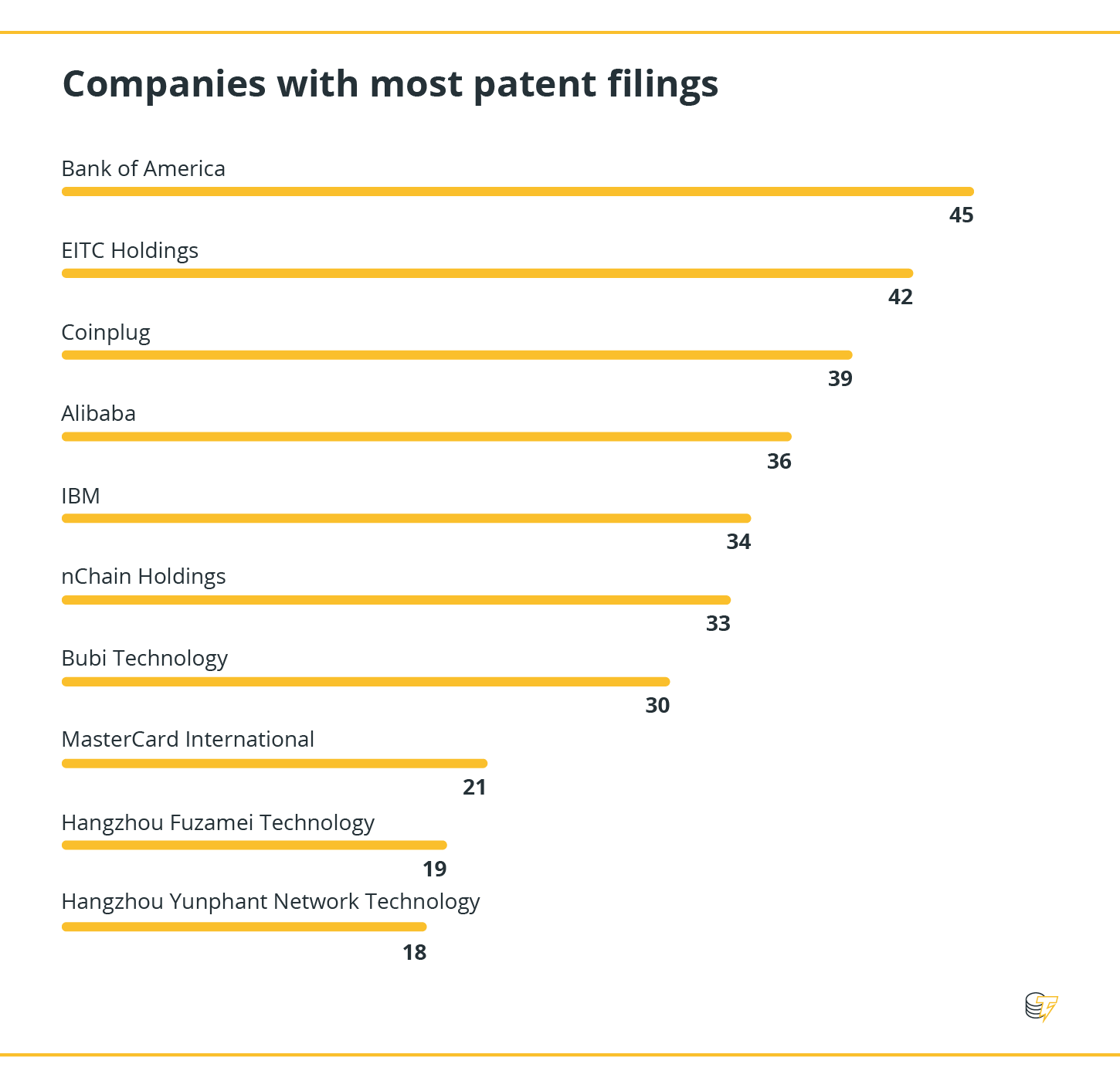 Patent trolls are hopping on the bandwagon

The majority of international blockchain patents applications are filed by EITC — also known as nChain — Bank of America, Alibaba, Coinplug and IBM, according to data obtained from bitcoinpatentreport.com.

EITC — perhaps the least popular out of five for a casual reader — is affiliated with Craig Wright, an imposter of Bitcoin creator Satoshi Nakamoto and a rather controversial figure in the industry. It’s been argued that Wright is gathering patents without the intent of actually using them, but instead to demand large payouts from companies who might entail similar technologies in their line of work. As Marc Kaufman, an attorney who co-chairs the Blockchain Intellectual Property Council at the U.S. Chamber of Digital Commerce, told Fortune:

“His tactics and activities have all the marks of being a patent assertion entity or what’s pejoratively known as a troll. I’m not aware of his companies having any products.”

Indeed, blockchain has become a brand new target for patent trolls. In December 2017, Erich Spangenberg — an entrepreneur despised in Silicon Valley for challenging tech patents and turning a $1 million tech patents portfolio he bought in the 1990s into $150 million — created a company called IPwe, comprised of 20 full-time employees and ‘consultants.’ Its goal is to "apply blockchain, artificial intelligence and predictive analytics to improve patents," as Spangenberg put it in a comment for CNBC. He elaborated:

"It is a curious path how a collection of misfit trolls, geeks and wonks ended up here — but we are going to crush it and make a fortune."

James Bessen, an economist and executive director of the Technology & Policy Research Initiative at the Boston University School of Law told CNBC that “Spangenberg has made out well”:

“You want to go into a new field like blockchain because there won’t be a lot of patents, and the original stuff was open source.”

Bessen argues that patent trolls proved to be a legit threat to the software industry during its first boom, when numerous “crap patents” were issued for various digital payment methods. Trolls provoked lawsuits against numerous businesses who incorporated any form of e-commerce transaction, and the court would take the former’s side. According to Bessen:

Somewhat similarly, Bank of America — another top patent applicant — seems to prioritize having a registered technology over actually using it. In 2016, Catherine Bessant, chief operations and technology officer at Bank of America, told CNBC that having blockchain-related patents is “very important[…] to reserve our spot even before we know what the commercial application might be.” Notably, Bank of America doesn’t appear to be positive about cryptocurrencies either. For instance, in May, the bank called Bitcoin ‘troubling’ and uplifted its decision to ban customers from purchasing crypto.

The process of receiving a patent is complex

Thus, getting a patent is a time-consuming process. As the Wall Street Journal writes, the patent office “publishes applications up to 18 months after they are filed and can take years to examine an application to decide whether to grant patent protection.” Bloomberg cites a similar timeframe and provides the example of Bank of America’s application for a crypto exchange system to convert one virtual currency into another: It was submitted in 2014, published in 2015 and granted in 2017. However, blockchain patents are being granted, at least to some extent — For instance, Bank of America reportedly has at least two at this point.

Nevertheless, the outcome of a blockchain patent filing is often unclear. While there’s little information on the exact amount of denied applications, it is worth noting that in 2014, the U.S. Supreme Court ruled that software apps dealing with abstract and non-inventive ideas can’t be patented under existing law, mainly due to the patent troll-induced fiasco mentioned above. Since then, it has become considerably more complex for a software company to pass the eligibility test.