So far, Havard and Yale lead the pack of institutional money in the crypto world, with multi-million dollar investments in cryptocurrency-related companies.

Despite the crypto volatility, the widely publicized regulatory concerns and a lack of liquidity in the cryptocurrency market, reports show that university endowments worldwide are dipping their toes into cryptocurrencies.

Recently, a survey conducted by a trade publication in partnership with two other startups showed that up to 94% of the 150 endowments surveyed had an investment in crypto-related projects. More than 80% of those surveyed were United States-based institutions, with the rest of the respondents coming from the United Kingdom and Canada.

What is most exciting about the survey is that a whopping 54% of respondents said that they “directly invested in cryptocurrencies though the assets themselves.”

The other 46% said they gained their exposure through products offered by crypto funds.

On Oct. 10, 2018, another report published by a technology news site indicated that multiple prestigious and Ivy League universities in the U.S. had made investments in cryptocurrency funds. Although the report cited an anonymous source, it revealed that “Harvard University, Stanford University, Dartmouth College, Massachusetts Institute of Technology (MIT), and the University of North Carolina” had all invested capital in the crypto space.

Furthermore, Yale University (another Ivy League school) was revealed to have dabbled in the crypto space with an investment that helped Paradigm (a digital currency fund) raise $400 million.

With nearly $30 billion in its endowment fund, Yale is believed to be the second-largest endowment after Harvard's $39.2 billion endowment.

A brief background of endowment funds

Even though most universities are financed by the government, educational institutions also get much of their income from the courses they teach. But, unbeknownst to most, these institutions also operate lucrative money machines in the form of endowment funds; that aim to provide supplementary income.

Endowment funds come from donations that are given to colleges and universities for the purpose of investment. The institution holds the principal of the investment in perpetuity while making annual payments of about 4-5% to the university’s annual expenditures.

With a dual goal of growing the principal as well as generating income, endowment funds have become accustomed to a strict set of guidelines. These guidelines are designed to dictate the allocation of funds. For a long time, the overall principle for most endowment funds was to yield returns while taking the least amount of risk.

That was the norm until the appointment of David Swensen over Yale’s endowment in 1985. By reducing the endowment’s commitment to U.S. stocks and bonds from 75% in 1988 to 14% in 2008, Swensen successfully managed to grow Yale’s endowment from a little over $1 billion to its current worth that is just a few points shy of the $30 billion mark.

Swensen’s success over the years sparked a revolution in the university endowments space, prompting a move from traditional stocks and bonds to the so-called “alternative assets” (investments that include natural resources, private equity and real estate). Following Swensen’s success, other endowments — such as Harvard’s — were also able to generate huge returns over the years.

The two decades leading to the financial crisis of 2008 have presented endowments good alternative assets. Subsequently, we can assume that endowment managers like Swensen have acknowledged that what worked in the past may not work in the future. Therefore, endowments have started devising new investment strategies in an effort to stay afloat.

Despite crypto winter, endowments are not walking away

Although respondents form the survey conducted by Golden Custodian acknowledge the risks that the cryptocurrency market is currently facing, only 7% of the respondents anticipate an annual decrease in the funds they have invested.

Endowments are showing strong bullish signals by factoring in crypto-related investments into their allocation, without a thought of stepping away anytime soon.

In fact, on April 11th, Bloomberg reported that Havard University’s endowment, in conjunction with other investors, has invested a cumulative of about $98.5 million into Blockstack’s token sale.

Blockstack is a crypto-based company that is seeking $50 million through its digital-token offering. The funds are set to go into enabling Blockstack to support the development of its own decentralized computing network.

According to the SEC filing for the Reg A+ offering from Blockstack, Harvard’s endowment allocation amount sits between $5 million and $10 million. These are funds invested directly into the startup’s token sale, meaning the Ivy League’s endowment is holding some of Blockstack’s tokens.

This means that one of the leading university endowments is comfortable holding tokens directly.

THE VIRUS IS SPREADING 🔥

Another university endowment investment in 2019 is the University of Michigan (UoM). With a $119 million endowment, this university is reportedly planning to increase its stake in an Andreessen Horowitz-managed crypto fund.

In June last year, the University of Michigan’s endowment invested $3 million to the fund. Although details about the amount were not revealed, UoM’s endowment confirmed its dedication to inject additional investment into the Andreessen Horowitz’s (also called a16z) fund dedicated to crypto.

What are the skeptics saying?

Following the move by UoM’s endowment fund, most onlookers like David Nage (a former family office investor) believe that the rationale that drives the University of Michigan’s interest in crypto is too bullish for the ecosystem. In a posted tweet, Nage mentioned:

“University of Michigan’s Endowment invested in a16z crypto back last year but has approved follow on investment recently. The rationale listed below I find interesting and bullish for the ecosystem.”

From Nage’s point of view, the huge interest in crypto-based ventures by significant endowments has validated retail investors to stay bullish despite the market experiencing the most extended bear phase.

In fact, people are beginning to wonder whether the huge interest in crypto by endowments is healthy. With Bloomberg’s Galaxy Crypto Index hitting its most overbought mark since last year, experts have started to warn that crypto prices are about to collapse once again.

As it stands, Swensen’s model of investing has become the investment yardstick for endowments to follow, but only a few schools have managed to pull off what Yale's endowment has accomplished.

According to a study conducted with a sample of over 28,000 endowment funds in the U.S., “Major endowments in the United States are [actually] underperforming.” Study says:

“The median annual return for the entire endowment sample was 3.75 percent or 1.14 percent below the 10-year treasury bond return."

The researchers acknowledge significant exceptions such as Yale, but they still support the conclusion that college endowments are better off buying treasuries instead.

Contrary to expert opinion, however, is Anthony Pompliano, the founder of crypto fund Morgan Creek, who believes that “there’s a belief in the institutional world that if the industry will be around for a long time, it will be very valuable.” He further pointed out:

“The smart money is not distracted by price [volatility] but looks at the long-term trends, and believes they’re betting on innovation as a great way to deliver risk-mitigated returns.’’

The reality of investing in crypto is that it forces endowment investment officers to adapt to a whole new set of issues. After all, crypto bets are very different from taking equity stakes in regular startups.

“People are excited about it but afraid of being the first, or having to explain themselves. That’s the fear vs. greed of institutional investing. There’s a herd mentality there as much as there is in retail investing.”

That is why most onlookers believe that the confidence in crypto as shown by the world’s leading endowments might lead to increased high-profile institutional investment in the cryptocurrencies world by other institutional investors, as was the case in 2017. The only difference is that this time, it will be better controlled.

Already, the new interest in the digital coin space by endowments has brought with it a wind of moderate comeback across the crypto market. So far, ether and bitcoin have gained over 66% and 73% respectively this month alone, and XRP — the third-largest cryptocurrency in terms of market cap — has rallied by 48%. 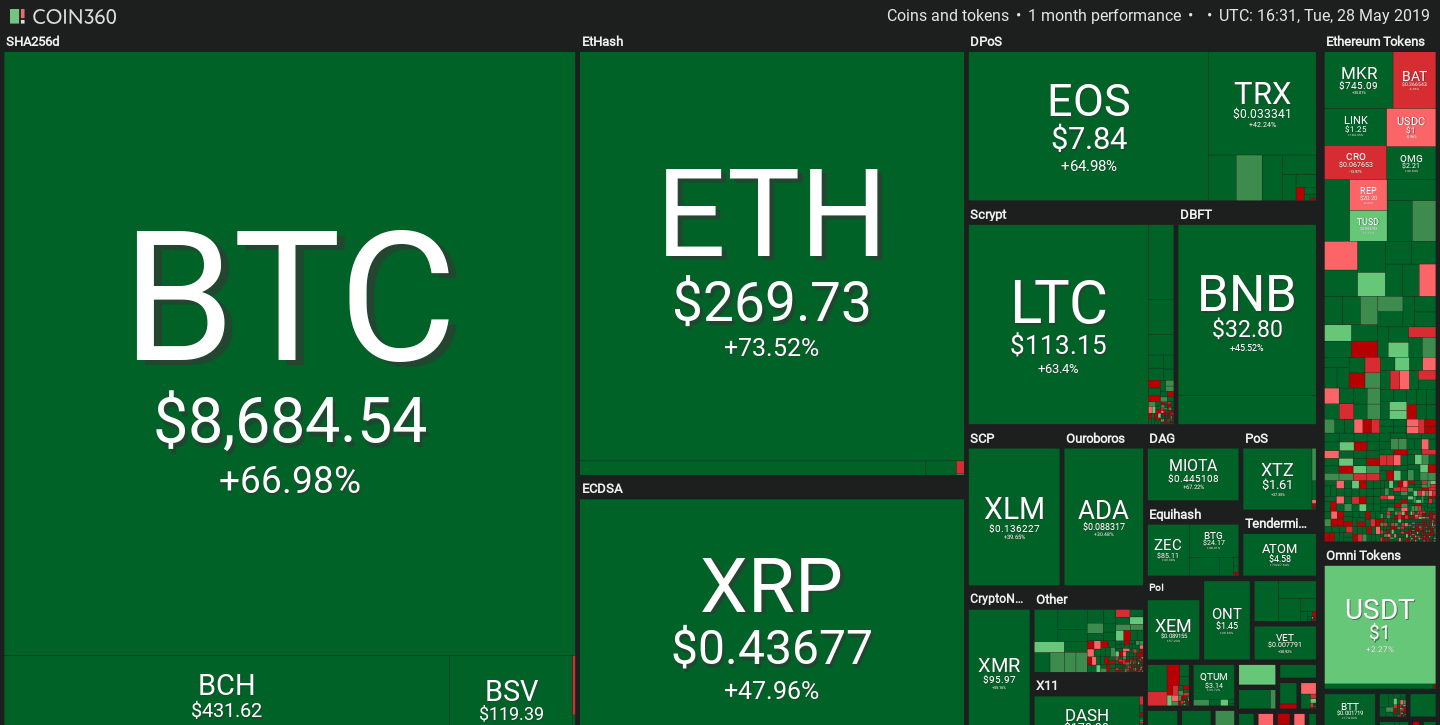 Caption: One month performance of the crypto market. Source: coin360.com

An eye on the future

Apart from jumping onto the crypto bandwagon, universities and colleges have grown in their appreciation and understanding of blockchain technology as well. From MIT to Cornell and even Stanford, blockchain courses are growing in popularity everyday. All over campuses, blockchain technology is touted as the next revolution that is set to be as huge as the internet.

But, while it is easy for universities to offers courses on blockchain and crypto, what has caught many by surprise is the fact that universities are willing to put their money where their mouth is. Nothing is as powerful as showing your support for an emerging technology than with your wallet.

Granted, the investment arm of any university is typically independent of the academics, the move by endowment investors like Swensen, however, is a strong signal that blockchain and cryptocurrencies are here to stay.