Municipal Crypto Spreading Around the World, From California to Dubai

Everything you need to know about municipal cryptocurrencies and where in the world they are being implemented.

The minimum bond investment is $1,000, although they are usually sold in batches of $5,000. People who want to invest less simply cannot do it. Cryptocurrencies and tokens could be used for assets under $5 million and enable investments under $5,000. Harvey sees the main mechanism for municipal cryptocurrency as the securitization of assets, such as the aforementioned soccer complex or, say, for a health clinic. Harvey told Cointelegraph:

“Things that you can engage the community to actually contribute to things they get something for. So, they've got that kind of token, and potentially the token can be traded. You get some token for the soccer field, a soccer stadium or just some token, but it's also the case that you can say use that token to pay for 10% of your meal at the restaurant. This is something we've not had before.”

If a municipality needs a new sports field, naturally it is going to cost money, which usually comes from taxes. “They got the land, but it's going to cost some money for maintenance and stuff like that,” Harvey said. “So, you basically tokenize that and essentially sell the tokens to the community so you get the money.” Harvey believes it’s easy for a municipality to launch such a token and that the issued token by the municipality could be useful. In the end, the community benefits from a multiplier effect, whereby, indirectly, several businesses may be linked through promotional and discount schemes connected through a municipal token.

Cointelegraph took a look at some of the municipal cryptocurrencies out there and their various stages of ideation and development from all around the world. 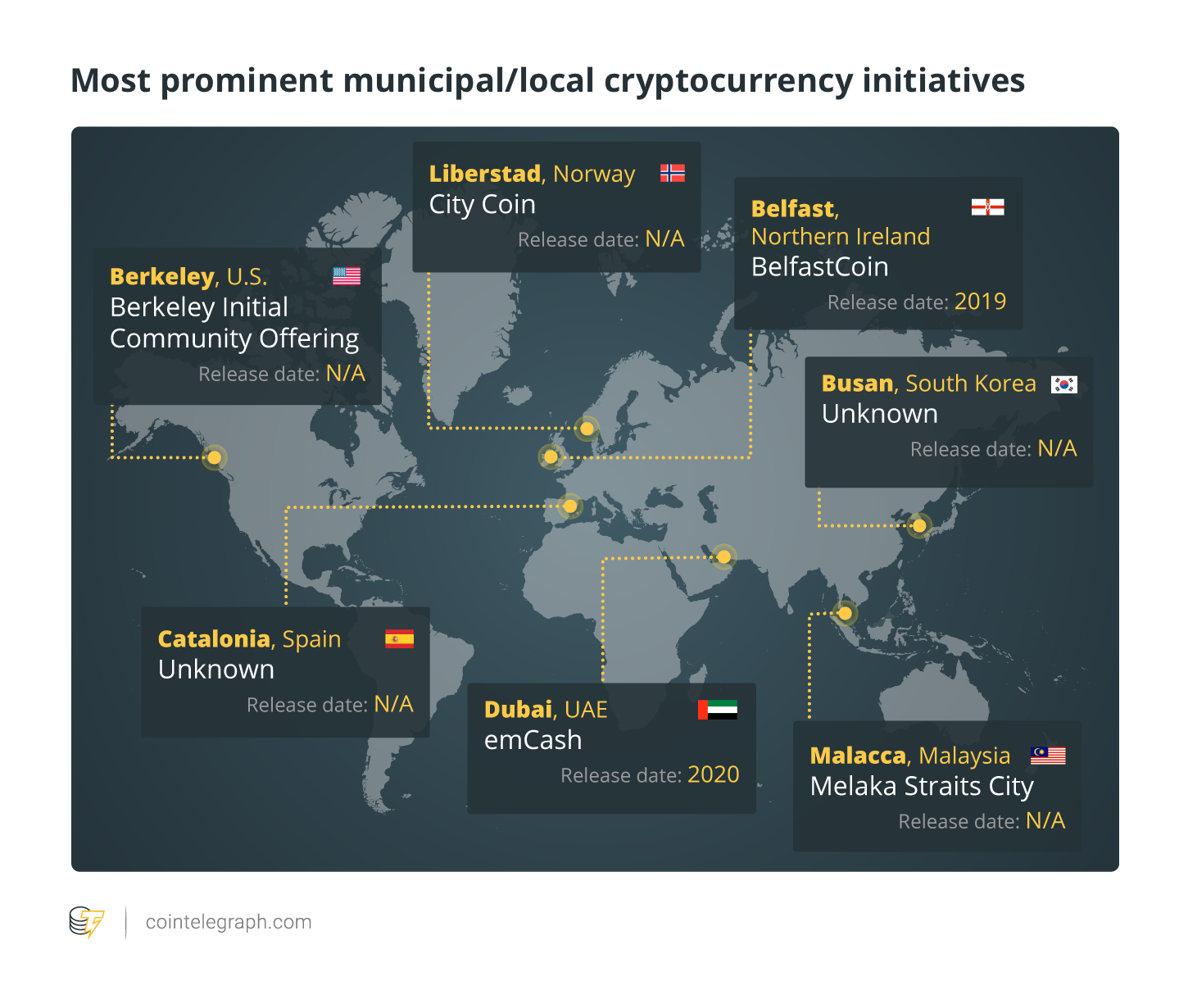 Proposed by Mayor Jesse Arreguin and Councilman Ben Bartlett, the project was intended to raise money similar to a bond but be priced low enough to allow everyday consumers the chance to invest. The token would be backed by a city bond. The initiative has yet to launch — and it’s unclear if it ever will — but the attempt by city council members goes to show a growing interest in raising municipal funds through creative means. The population of Berkeley is 112,000. Liam DiGregorio, working in business development at the University of California-Berkeley’s Blockchain at Berkeley, an organization dedicated to becoming the blockchain hub of the East Bay, told Cointelegraph:

“This presents an opportunity for the city to engage with its constituents to test this proposed use-case with a lower associated cost. Given the inspiration for this proposal was to fix the housing crisis in Berkeley which largely affects students, it presents an opportunity for the community to fix itself. Being located in the Bay where many blockchain companies call home, also doesn't hurt.”

The city of Dubai stands to make the most impact in using a municipal stablecoin. Nestled in the United Arab Emirates, Dubai has transformed itself over the last 20 years to become a technology hub in the Middle East.

The city planned to release its city-issued cryptocurrency in 2018, but no news has been released for the past year. The plan is to put all official documents on the blockchain by the end of 2020 by using smart contracts. A recent meeting of Ethereum developers with Persian Gulf representatives hinted at a possible integration with Ethereum. Dubai’s GDP is $102.67 billion,  and its population is more than 5.5 million

The second-largest city in South Korea, Busan, is exploring the creation of its own stablecoin, as reported by Cointelegraph. The stablecoin would be backed by the national banks and accepted anywhere in the city. The city is apparently working with Hyundai Pay to facilitate implementation. Like with other stablecoins, Busan’s goal is to boost the local economy. Busan’s GDP is $75.8 billion, with a population of 3.5 million.

South Korea has the third-most blockchain patents, trailing behind only the United States and China. South Korea’s Ministry of Small and Medium Businesses (SMEs) and Startups stated that the government plans to provide “extensive support if Busan develops its own blockchain-based currency structure or token economy.”

Malacca is looking to build the Melaka Straits City, a “tourist blockchain-destination of the future.” Launched by China Wuyi, an engineering and construction company based in China, the future city will issue its own cryptocurrency, DMIcoin, which will be used to pay for public services. Cash will be banned. KK Lim, the CEO of Melaka Straits City, told the Express at the time:

"Tourists in the city will have to exchange their money for digital currencies, which they can use to pay for services using their mobile phones or computers. The DMI web application will be available on the PC, and the mobile applications will run on Android and iOS devices to provide flexibility regardless of user preferences.”

There are some other, more politicized attempts to create a crypto city. Take the proposed city of Liberstad, for instance. This private, anarcho-capitalist city in Norway wants to create a smart city platform with a native cryptocurrency as the city’s official medium of exchange.

Related: CBDCs of the World: The Benefits and Drawbacks of National Cryptos, According to Different Jurisdictions

The idea for Liberstad was initially developed in 2015. As Cointelegraph reported, city plots were initially sold in 2017 for Bitcoin or the Norwegian krone. The city adopted City Coin (CITY), which will be the only medium of exchange in Liberstad, where national currencies are not allowed. CITY and Liberstad’s smart city platform, City Chain, are interoperable. City Coin is based on a proof-of-stake consensus algorithm with block validators chosen based on the number of tokens staked in their wallet.

BelfastCoin is designed to help bolster the local economy as well as to reward citizens for shopping locally and taking part in community volunteering. The municipal currency is not built on blockchain technology. Rather, Israeli payment firm Colu will be creating the technology and payment application. Each token will be worth 1 British pound, and the plan is to release it later this year. The population of Belfast is around 333,000. Grainia Long, Belfast’s commissioner for resilience, said:

“Being selected to be part of the global city currency challenge means an important opportunity for Belfast, and I’m delighted that this has been made possible through our partnership with 100 Resilient Cities, and working with Colu. Belfast Coin will be introduced later this year and it’s our hope that it will initially give an economic boost to local businesses, as well as helping Council achieve other long-term goals, including environmental improvements.“

The commissioner added, “This challenge gives us the opportunity to explore how a city currency can bring residents, businesses and city partners together to support inclusive growth — a key priority within our Belfast Agenda.”

When the Catalonia region of Spain declared its independence in late 2017, the Catalonian director of its digital office, called SmartCatalonia, visited Estonia to learn about its digital residency plans. The regional leadership also explored cryptocurrency as an alternative to the traditional central bank system. Additionally, there were reports at the time that the region is considering adopting a blockchain voting system by 2020. Ethereum co-founder Vitalik Buterin offered his advice to the local government:

“This young Canadian of Russian origin advised them to create an ICO for the virtual residents platform, with an initial offer of currency that would correspond with the financing of a business project for the virtual residents program. In an ICO, a new cryptocurrency...can be financed within the e-Residency ecosystem, something that would help create an economic community that is absolutely independent and outside the regulatory eye of a central bank.”

Cryptocurrencies could comprise a key part of smart cities in the future. For instance, a division of e-commerce giant JD.com established the Smart City Research Institute, which is meant to accelerate the creation of smart cities using blockchain technologies, as reported by Cointelegraph.

Overarching population trends could create a world more conducive to city-backed cryptocurrencies. More human beings are living in urban areas today than in rural ones. There are 40 mega-cities that are home to 25% of global GDP. Municipalities might one day produce their own money that they then can sell to others, effectively becoming their own central banks.