The number of Bitcoin whales has hit a new all-time high, signalling that BTC is still in an accumulation phase.

8220 Total views
80 Total shares
Listen to article
0:00
Markets News
Own this piece of crypto history
Collect this article as NFT

In recent weeks, the number of Bitcoin (BTC) addresses holding over 1,000 BTC — often referred to as “whales” — rapidly increased to around 2,088. This trend started shortly after Bitcoin price crashed to $3,600 in March.

The data is relevant because historical data suggests that aggressive accumulation by large investors is typically a sign of a new bull cycle.

Throughout the past six years, Bitcoin has seen periods of inverse correlation between whale accumulation phases and BTC price. Whenever the number of addresses holding substantial amounts of BTC dropped off, the price of BTC declined.

Whales tend to follow areas that have the most liquidity, as they deal with large amounts of Bitcoin. As such, when whales believe the price of BTC has reached a top, they sell quickly, causing the number of large addresses holding BTC to drop.

Another on-chain metric that is not limited to whales suggests investors are generally accumulating more Bitcoin than before. Glassnode found that addresses that never spent BTC but have been active in the last seven years increased noticeably since 2018. The researchers wrote:

“There are over 500,000 #Bitcoin "accumulation addresses" holding a total of 2.6M $BTC (~14%) Accumulation addresses: have 2+ incoming txs [transactions], never spent BTC, were active in the past 7 years (accounting for lost coins), exchanges and miners are excluded.” 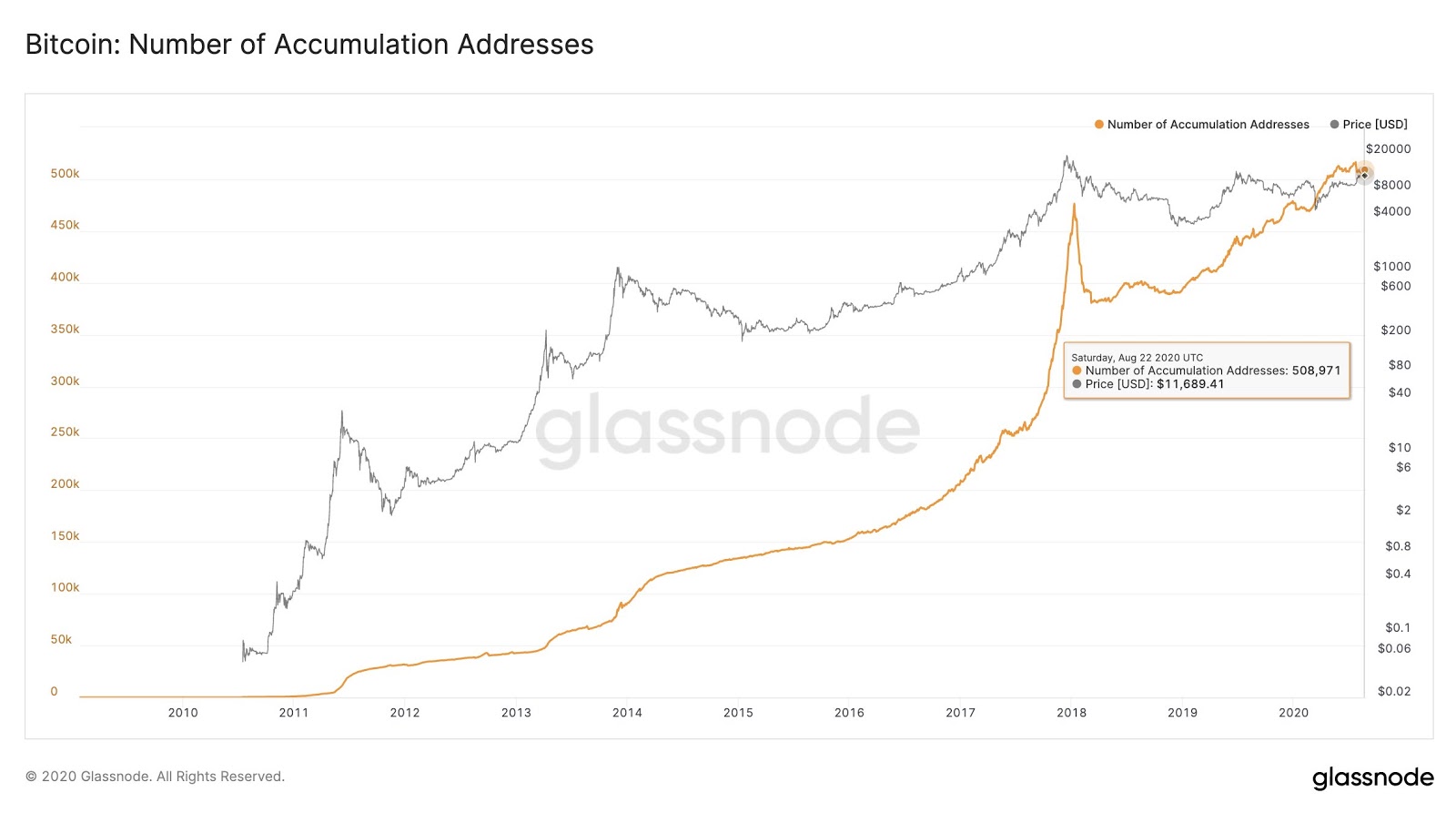 While both data points are acknowledged as bullish trends, it is also important to note that they have risen consistently over the past ten years.

It is difficult to determine whether this data bodes well for the near-term price cycle of BTC. However, it does suggest a healthy long-term growth trend for Bitcoin.

In addition to data which suggests an accumulation phase for Bitcoin, various fundamental factors signal stability in various industries.

The hash rate of the Bitcoin blockchain network is continuously achieving record highs in spite of the May 11 halving. This indicates that the price point of BTC is high enough for miners to remain profitable. 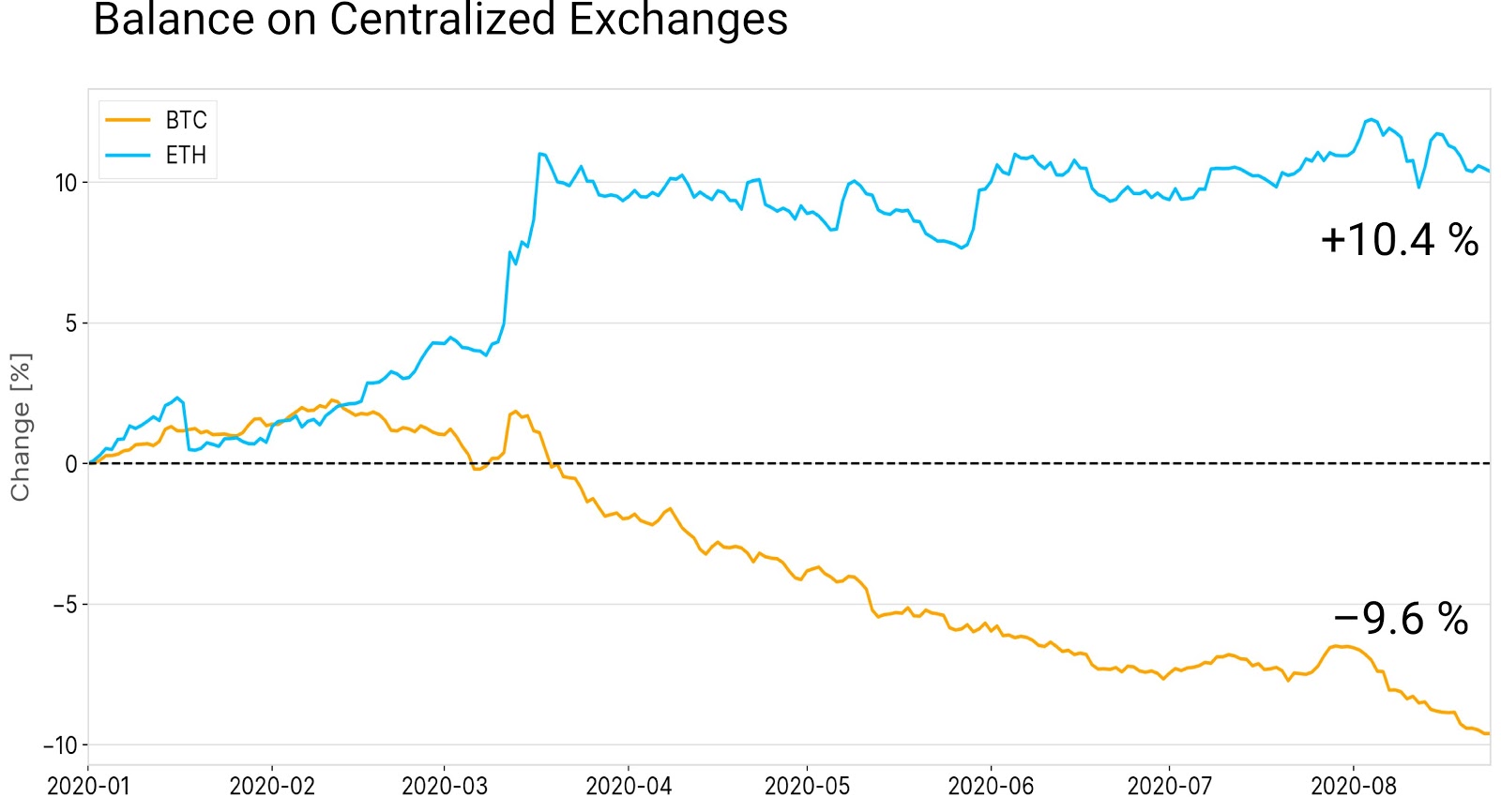 Balance of Bitcoin and Ether on exchanges. Source: Glassnode

Trading activity across top exchanges and regulated futures markets like CME also remains high. But, the reserves of BTC on exchanges have dropped significantly in comparison to previous bull cycles.

The trend of high trading activity and a low BTC reserves hint that investors are likely buying BTC on exchanges rather than selling. Rafael Schultze-Kraft, the chief technical officer at Glassnode, said:

Since most retail investors use spot cryptocurrency exchanges, while institutions use regulated investment vehicles and some whales use over-the-counter exchanges, data suggests that both retail and whales appear to be accumulating Bitcoin.