Ripple officially took over Ethereum to become the world’s second largest cryptocurrency with a total market cap of $8.5 bln. 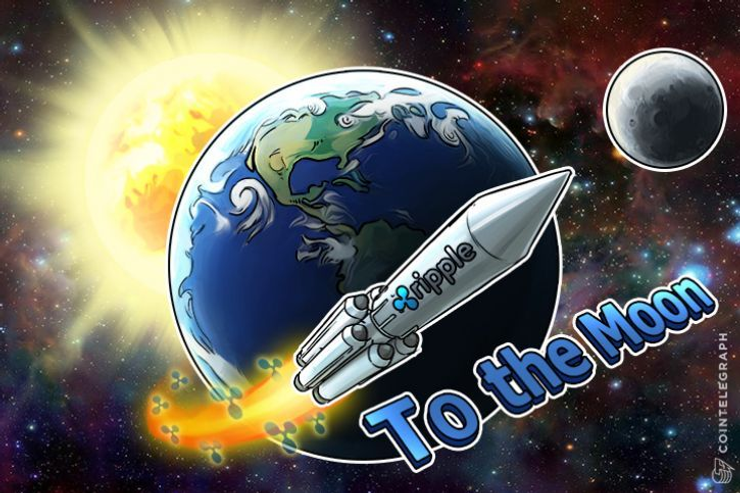 Rather unexpectedly, Ripple officially took over Ethereum by $200 mln in market cap to become the world’s second largest cryptocurrency with a total market cap of $8.5 bln. Over a 24-hour period, Ripple price recorded a 71.6 percent increase, while Ethereum price decreased by 6.85 percent.

Although Ripple has made significant progress in establishing strategic partnerships such as the recent addition of 10 new financial institutions including MUFG, BBVA, SEB, Akbank, Axis Bank, YES BANK, SBI Remit, Cambridge Global Payments, Star One Credit Union and eZforex.com, it is difficult to justify its 71 percent gain in such a short period of time.

The latest partnership or initiative launched by Ripple was 11 days ago and no major exchanges or trading platforms globally have integrated support for Ripple trading in the past few weeks. Thus, to be critical, a 71 percent increase in Ripple price seems fairly inorganic.

The only driving factor that could explain Ripple’s latest price surge is the establishment of a collaborative project amongst banks in the Japanese Consortium for cross-border and domestic payments.

According to its official introduction video, Ripple is powering the entire network with its Blockchain-based cross-border and cross-bank payment protocol.

“In order to address these emerging needs, banks have come together to launch the Japan Bank Consortium for cross-border and domestic payments which enable a flexible and efficient payment system. It is the world’s first case to implement Ripple solution in a cloud environment.”

With its partnership with Japan Bank Consortium and other leading banks and financial institutions in Europe such as BBVA, Ripple has solidified its position as the base Blockchain protocol for the global financial structure and industry.

What does it mean for Ethereum?

Ethereum has implemented a similar partnership-based strategy with the launch of the Enterprise Ethereum Alliance earlier this year.

While it is still uncertain whether Ripple’s short-term growth will stabilize over the long run, Ethereum and Ripple are both utilizing the same strategy to appeal to large-scale conglomerates and banks. Although Ethereum has attracted the likes of JPMorgan, Ripple seems to have grasped the attention of multi-billion dollar banks and financial institutions.

Related News
Crypto Bubbles: Why Traders Believe Altcoins Are Overpriced
Startup Brings Crypto Payment Option to Over 730 Locations Worldwide
Bitcoin Price Breaches $7,400 Mark as Most Top-20 Coins See Gains
China’s Central Bank Completes Top-Later Design and Joint Tests of Planned CBDC
Dash Surges by Over 16% as Bitcoin Price Hovers at $8,100
Japanese Regulator Officially Proposes Cutting Crypto Margin Trading Leverage Cap
<div is="sidebar" :sidebar-data="{"promoButtonsI18n":{"crypto-button":{"url":"crypto.btn.sidebar.url","label":"Get Crypto At True Cost\n","text":"Cryptoassets are complex instruments and investments carry a high risk of losing value. You should educate yourself in how crypto-markets work before making any investments. Always invest responsibly and be prepared for the risks associated with investing in or using cryptoassets. This promotion cannot be considered investment advice."},"etoro-button":{"url":"https:\/\/ad.doubleclick.net\/ddm\/clk\/437480595;240556498;x","label":"Try Etoro","text":"Trade on the world’s leading social trading platform (Highly volatile investment product. Your capital is at risk)"},"hitbtc-button":{"url":"https:\/\/hitbtc.com\/?ref_id=5cba0be404aa3","label":"BEST LIQUIDITY ON HITBTC","text":"Note that all trading strategies are to be used at your own risk. Before trading, we recommend to make sure that you have a clear understanding of cryptocurrencies and how they are traded."},"changelly-button":{"url":"https:\/\/changelly.com?utm_source=cointelegraph&utm_medium=referral&utm_campaign=changellyctengbutton&ref_id=le9ssi8dgmskmqu0","label":"BEST RATES ON CHANGELLY","text&quot