South Africa: The Next Frontier for Crypto Exchanges

What could make South Africa become the next fastest-growing crypto market? How the country is emerging as a crypto leader of the continent.

Africa is set to be the next battleground for major crypto asset exchanges, as the conditions on the continent are favorable for virtual currency, and as a leading economy, South Africa could lead the charge in this digital transformation. We will examine how the economic situation and the high inflation in Africa could shape the local crypto markets and why people on the second-most populous continent have been gaining an interest in crypto investments. South Africa in particular seems ready to ride the waves and thrive in the crypto world.

The continent of Africa contains 54 countries. It’s the second-largest and second-most populated continent in the world, just behind Asia in both categories. In the world of traditional investment, Africa may not be a bright spot, but economic growth has become increasingly noticeable. Data from the International Monetary Fund (IMF) shows that Africa’s real GDP is expected to have an annual growth of 3.6% this year — higher than the global growth forecast of 3.3% and just behind Poland’s estimated 3.8%. The IMF also forecasts that by the year 2023, Africa’s economic expansion will accelerate to 4.1%. 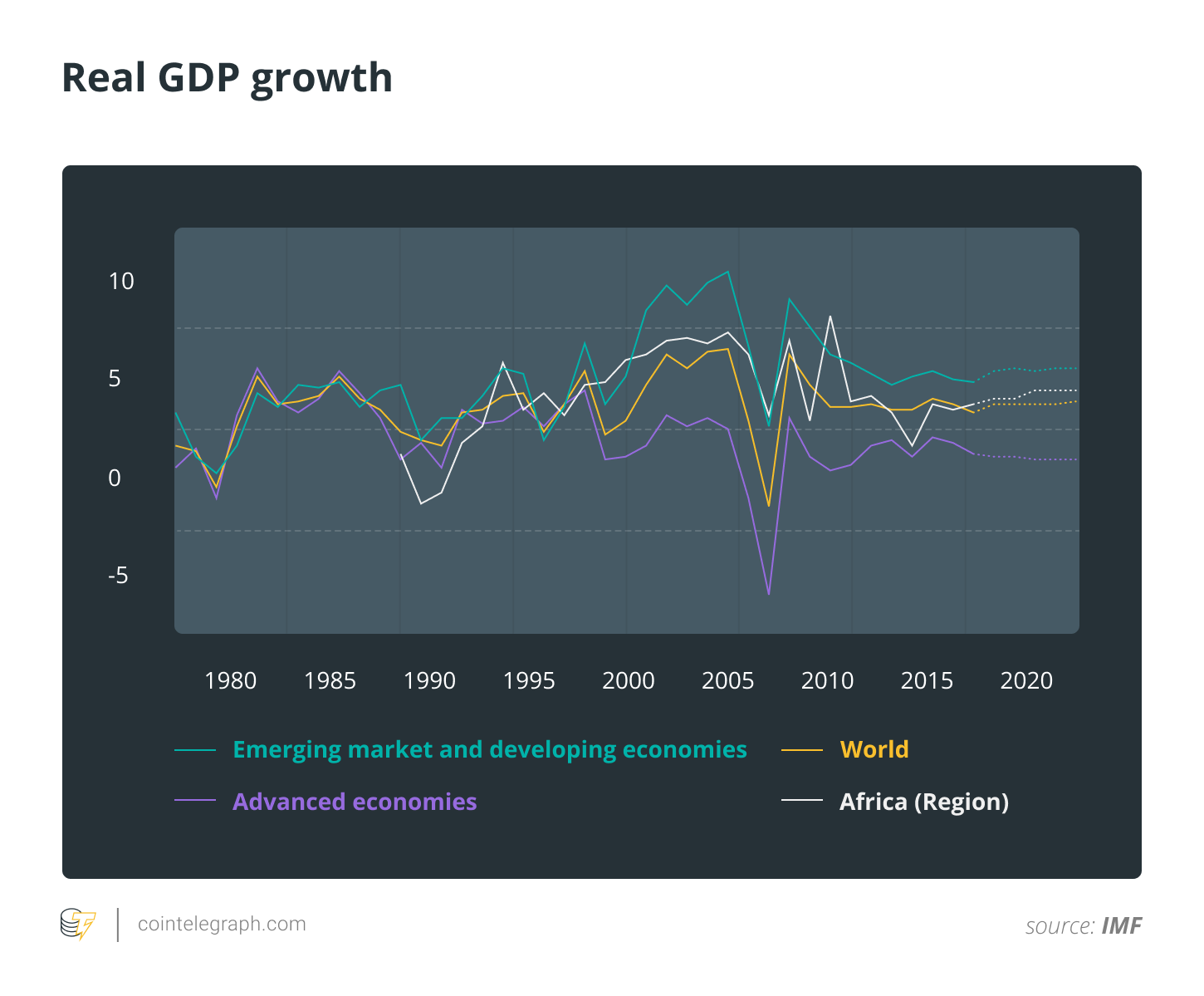 Africa’s growth prospects may appear lucrative for some investors, however, its inflation problems could hamper growth. While Africa’s average inflation rate has been relatively contained and much lower than that of other developing economies, if observed over an extended period of time, certain inflation rates across the continent show high instability due to political and economic issues in countries such as Zimbabwe, South Sudan, Sudan, Liberia and Angola. The inflation rate in these countries can be as high as double or even triple digits. 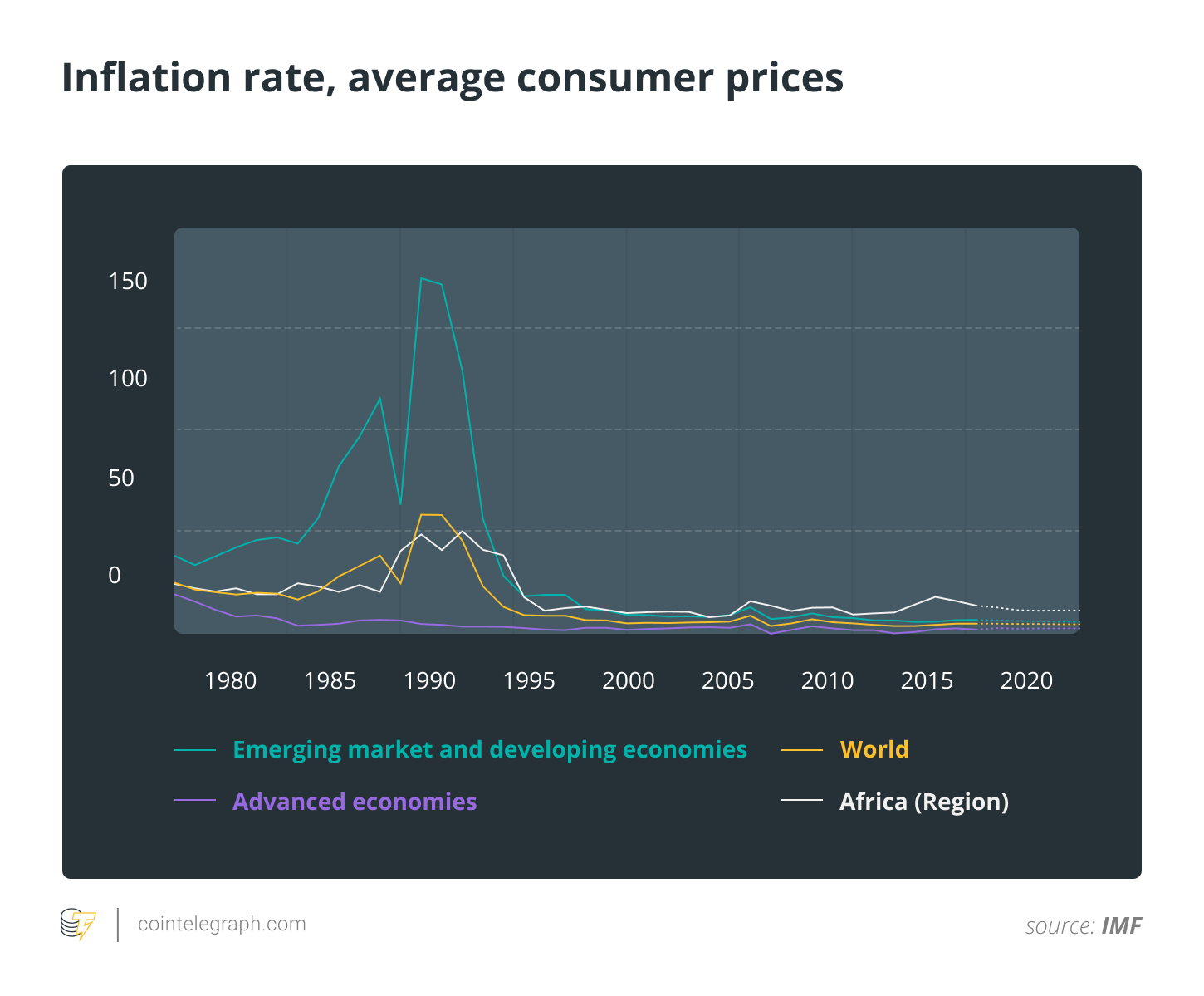 When the inflation rate is too fluctuated or surges drastically, businesses are faced with the challenge of appropriately pricing their goods, which significantly reduces consumer buying power. This is where Bitcoin (BTC) and crypto come in. According to the United Nations, the high-inflation landscape plus an improving economic situation have provided an ideal environment to foster crypto markets in Africa.

Citing blockchain experts, the UN’s Africa Renewal publication states that many African citizens use Bitcoin as a tool to counter the hyperinflation in their country. The report also says Botswana, Ghana, Kenya, Nigeria, South Africa and Zimbabwe were among the African countries that have the highest Bitcoin penetration rates, while other countries like Uganda were also seen gaining interest in cryptocurrency.

We reviewed how the improved economic conditions and inflation environment encouraged cryptocurrency growth in Africa, and this expansion seems also supported by the African people. A search popularity of the term “Bitcoin” in the Google search engine over the past 12 months surprisingly shows half of the top 10 results as African countries. 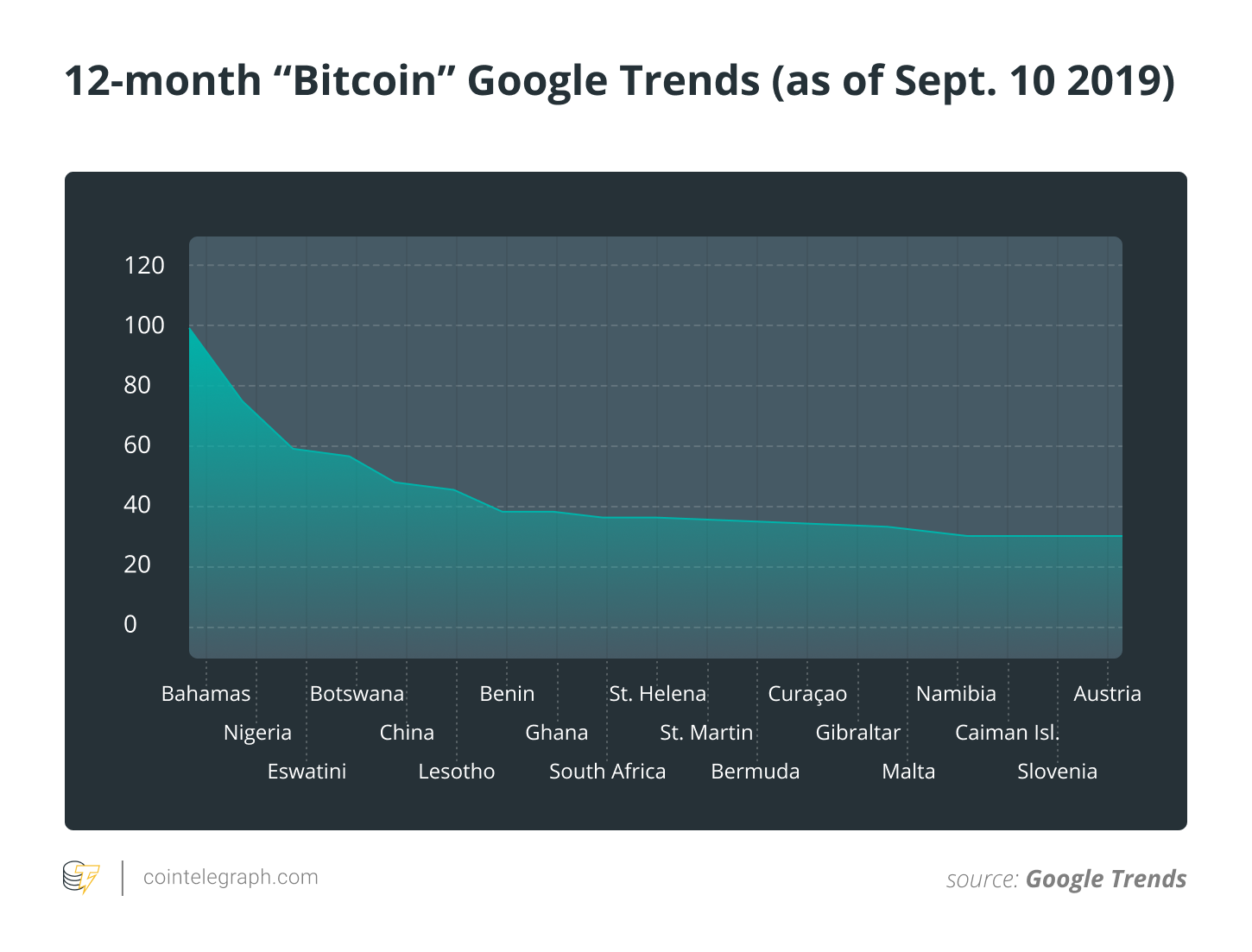 The strength of a country’s currency could add another dimension to the crypto development in Africa. A recent Statista survey shows that South Africa, Turkey, Brazil, Colombia and Argentina were among the highest cryptocurrency ownership countries, with almost 20% of respondents reporting that they have used or owned crypto assets in 2019. 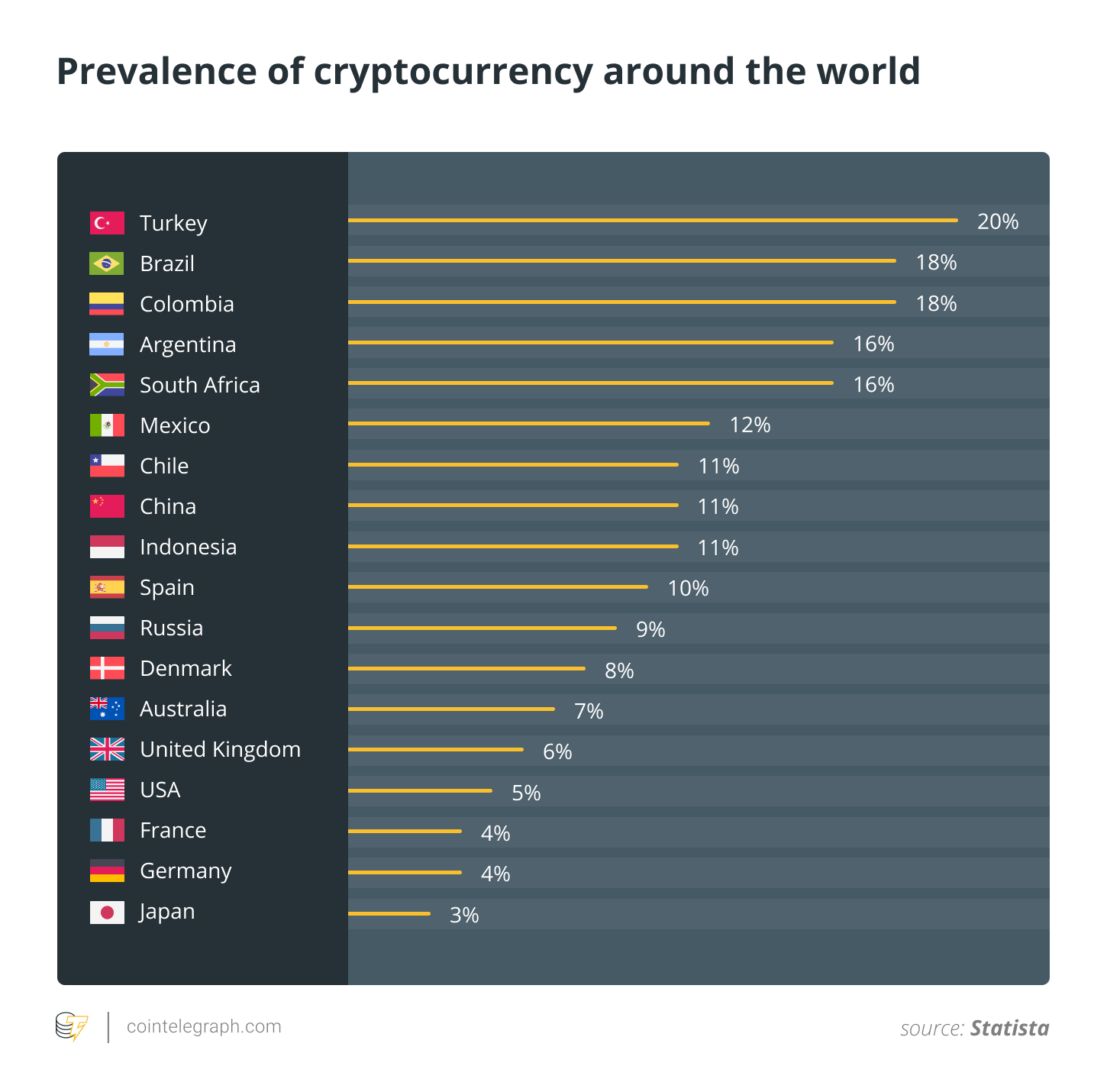 Another similar study from We Are Social and Hootsuite also indicates that 10.7% of internet users in South Africa own cryptos — the highest ratio in the world.

Correspondingly, the currencies of the five aforementioned mentioned countries have been some of the weakest performers against the United States dollar in recent years. Bellow is a 5-year chart of USD against ZAR, TRY, COP, ARS and BRL, and it’s not hard to see they have been trading at or near their 5-year lows. So, it’s reasonable to presume that the demand for countering FX devaluation could be higher among consumers of these weak-currency countries, and Bitcoin could be the answer for them. 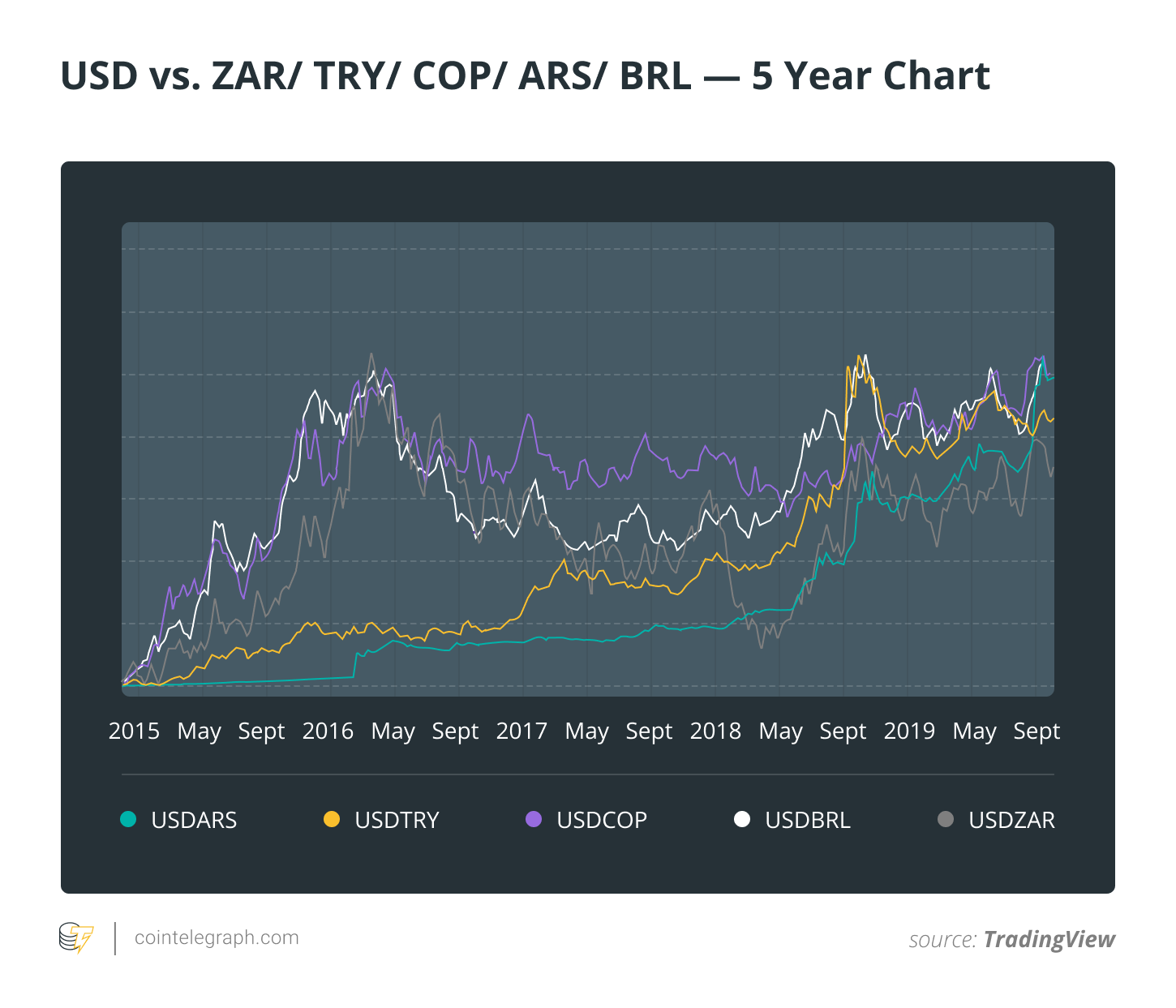 South Africa is the second-largest economy in Africa after Nigeria, which has been enjoying faster growth in recent years. The South African economy is more diversified, while Nigeria relies more heavily on its energy sector.

In the past, South Africa has mainly been focused on the mining and agricultural sectors, but in recent years, the country advanced its economy by shifting its focus to tourism, financial services and the tech sector.

Furthermore, South Africa is generally more accessible for foreign capital, which gives the country a slight edge when it comes to investment.

On the regulatory front

Regulatory issues have always been a major concern for crypto, digital asset exchanges and custody providers when it comes to expanding their businesses into new territory, and the regulatory landscape in South Africa — or broadly speaking, in Africa — could be a major factor that drives the crypto industry forward on the continent.

According to its document, the South African Reserve Bank does not currently oversee, supervise or regulate crypto assets, but added that it will continue to monitor this sector as it evolves.

The bank also released a Position Paper 02 in 2014 regarding its stance on crypto assets and stressed that the document remains current and relevant. The document highlighted:

“[...] increasing merchant acceptance, integrating existing conventional payment instruments with decentralized convertible virtual currency, and promoting the advantages inherent in such systems. Thus, there is potential for real growth of Bitcoin in its current operational environment.”

This underlines South Africa’s openness and recognition of Bitcoin, and in a broader sense, cryptocurrency.

However, the lack of a full regulatory structure won’t complete the whole picture. In January 2019, South African Finance Minister Tito Mboweni said the country is looking for a unified intergovernmental cryptocurrency regulatory framework, and established a working group to explore the opportunities of tokens and blockchain technology within the country. Mboweni expects that the report will be released this year.

Africa has laid the foundations for the crypto industry to thrive on the continent, its high-inflation economy encourages demand for value preservation, and Bitcoin and other cryptocurrencies could be an answer for consumers in Africa. South Africa, in particular, could become a leader in this crypto transformation.

Nothing in this article should be construed to be legal advice, and all content is for informational purposes only. You should not act or refrain from acting on the basis of anything herein without seeking appropriate legal advice regarding your particular situation.

Cyrus Ip works at OKEx as a research analyst. He provides value-added Bitcoin and altcoin analysis and has produced macro thematic research that bridges the gap between the crypto world and traditional financial markets. Previously, Cyrus worked with Citigroup where he served as an FX Market Analyst with a focus on G10 and EMFX. He was also a long-time financial journalist with solid experience in Hong Kong, China and Canada.