Volatility is the kiss of death for a currency; stablecoins are the only thing that can stand a chance against fiat, according to expert.

If you are under the impression that the quest for a decentralised currency started in October 2008, when Satoshi Nakamoto posted a whitepaper on a cryptography mailing list at metzdowd.com - you’d be off by about 40 years.

In the mid-70’s the Nobel prize winning economist Friedrich August von Hayek published a now nearly forgotten book called The Denationalization of Money in which he made an argument for competitively issued private moneys. Being the liberalist that he was, he trusted that the market would pick the best money for every occasion.

Von Hayek died in 1992 (spit out by academia, if you must know, for the sin of marrying a full cousin) so he missed the technological Blockchain and cryptocurrency revolution that made his vision possible. If he were still alive old Friedrich would feel vindicated. His prediction that the single most important roadblock for these private moneys would be volatility was spot on.

Cryptocurrencies are volatile. A layman - or an average redditor commenting on cryptocurrencies - would say “My Bitcoins have mooned!  I don’t see a problem.” But in economic theory, upwards revaluation is just as bad as devaluation since it hurts debtors and makes day-to-day practical implementations impossible.

It didn’t. They all failed in the same way, but for different reasons.

CoinoUSD and NuBits’ stability relied on the word of their developers. There was no stabilization mechanism in their program code: corrections were performed by central management. BitUSD was the first to try and achieve stability through a reserve fund - in their case through the BitShares cryptocurrency - but that wasn’t enough to stabilize the exchange rate at $1. 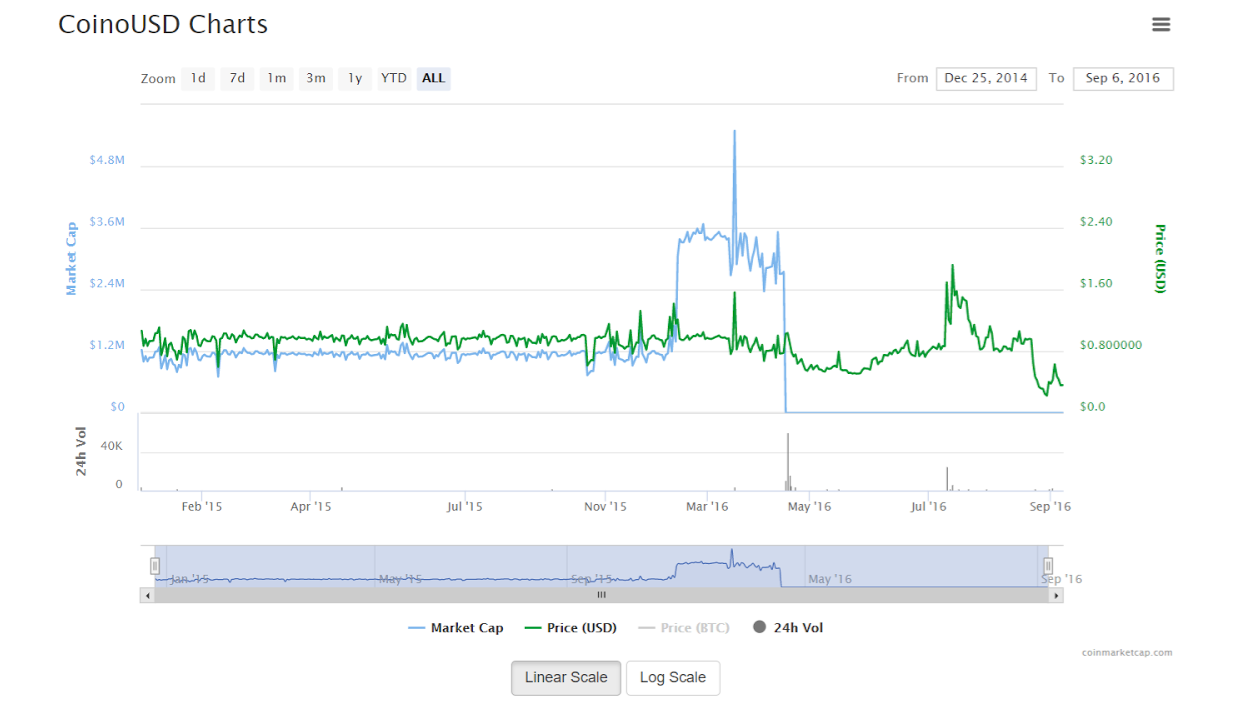 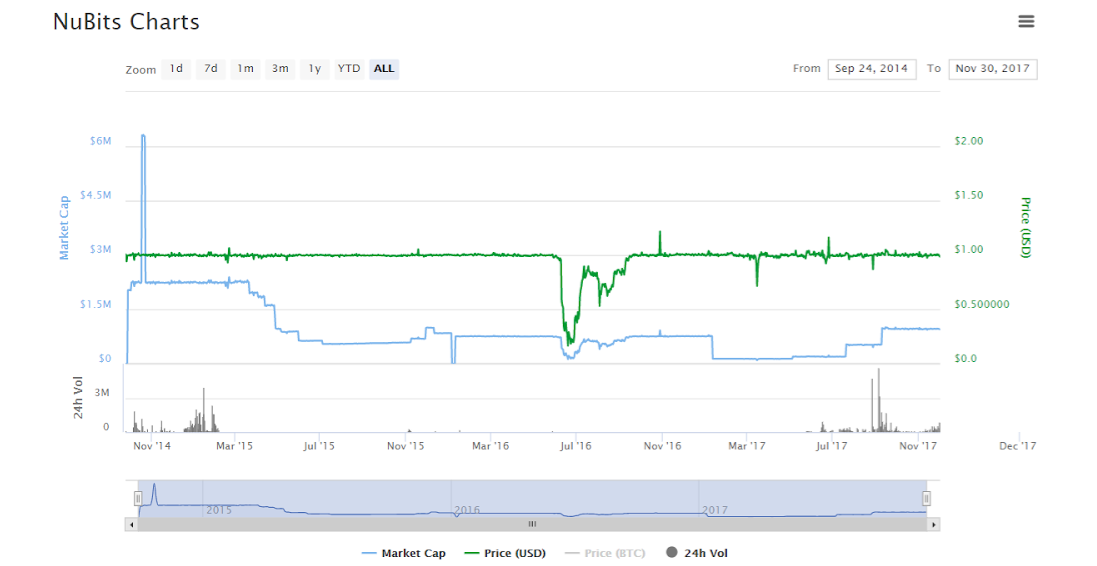 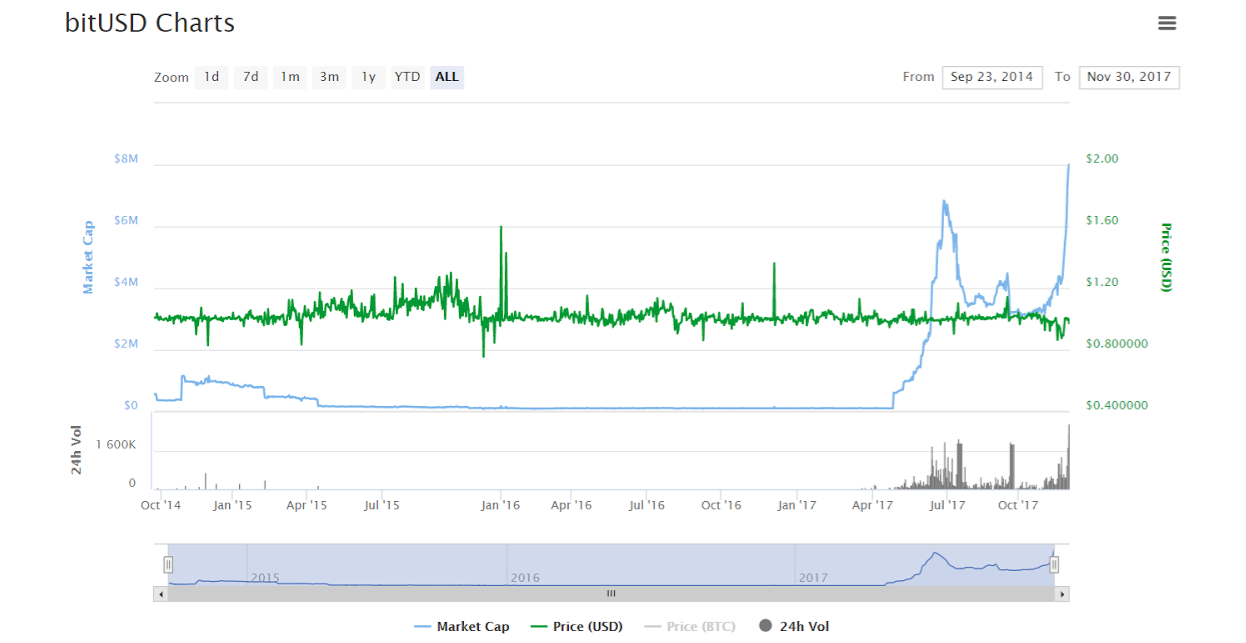 Tether, the most successful of the bunch, was the first to try and stabilize their cryptocoin by holding actual reserves in the currency it was pegged to. Tether’s big problem, however, was transparency. The reserve fund is not audited and the issuing company is shady. All this became painfully clear when Tether was hacked and 30.950.010 of those rock-stable USDT’s  were transferred to an unauthorised Bitcoin address.

The last couple of years saw several new attempts at creating stablecoins, with innovative new strategies. Bancor and Dai both try to achieve stability through reserves in Ethereum and respective tokens - which is volatile in itself - so not an option. Digix pegged itself to gold but immediately found itself in the same corner as Tether: the underlying reserves are not transparent and have to be controlled manually. First of all, the reserves need to be audited to avoid a Tether 2.0 disaster. The auditors need to be transparent, reliable and trusted, so it makes sense to tap a government organisation for the job. Secondly, the project should be supported on a legislative level. This provides a legal framework for payments, the recording on the balance sheet, transparent legal alienation, inheritance and processing of complaints through legal processes.

This knife cuts in many ways: for users money becomes more private as they shift away from banks to Blockchain tech - not to mention all the other well noted advantages this technology brings to finance. The State, on the other hand, enjoys the guarantee that the money supply of its currency does not increase and the available funds are used as reserves.

This approach has the potential to realise Von Hayek’s vision: hundreds of legal, stable and transparent currencies will pop up, all pegged to assets like gold, oil, wheat, national currencies and commodities. They will all compete for the hand of users who will be able to make a choice based on the advantages each coin brings for their specific use case.

And if you think that 100 different stable currencies is too many - our man Von Hayek’s got you covered. Three years after he propagated the release of many private moneys he realized that all these different currencies would make for a messy ecosystem. In the updated version of his book (with the subtitle “The Argument Refined") he speculated that markets would converge on one or only a limited number of monetary standards.

He just may have been right. Again.

Bio: Anatoly Knyazev is a computer scientist and co-founder of Exante, Bitcoin Fund, and Exan.tech. He started his career as a derivatives trader at his own fund in the early 2000s. He developed unique trading software turned into a Malta-based prime broker Exante. In 2012 Anatoly started the first in the world Bitcoin-only hedge fund.