Messari, a major blockchain and crypto research company, argues that there is a weak correlation between total tokens staked and price return.

As cryptocurrency markets are highly volatile, crypto players can’t stop arguing about what really impacts the price of certain coins and what does not.

Some crypto pundits believe a larger amount of tokens staked in Proof-of-Stake (PoS) blockchains could push the price upwards by reducing the circulating supply, making the remaining tokens more valuable. But blockchain and crypto analytics firm Messari has crunched the numbers and reports that there is little correlation between the two.

Announcements correlate with price though

In an April 1 blog post, Wilson Withiam, a researcher at the Messari analytics team, provided an analysis of 21 popular staking networks like Cosmos (ATOM) and Tezos (XTZ) in order to examine the level of correlation between the amount of staked tokens and price changes.

He found prices of the analyzed tokens are actually more correlated with project-related announcements than the amount of liquid supply of staked tokens.

Cosmos (ATOM) experienced the most significant price drop among the analyzed networks in 2020 despite having the highest staking total of more than 90%. The situation was affected by internal issues involving the shift of the company’s priorities amid multiple departures, the researcher added.

In contrast, Dash (DASH), which saw one of the biggest price upsurges among the analyzed tokens over a year-to-date period, has fewer tokens staked. According to the analyst, the token was rather more impacted by a March 2020 announcement about its new Dash v0.11 platform release. Indeed, Dash was among the top performers, with its price surging nearly 40% over a week in March after the Dash Core Group released significant updates for its platform, as Cointelegraph reported. 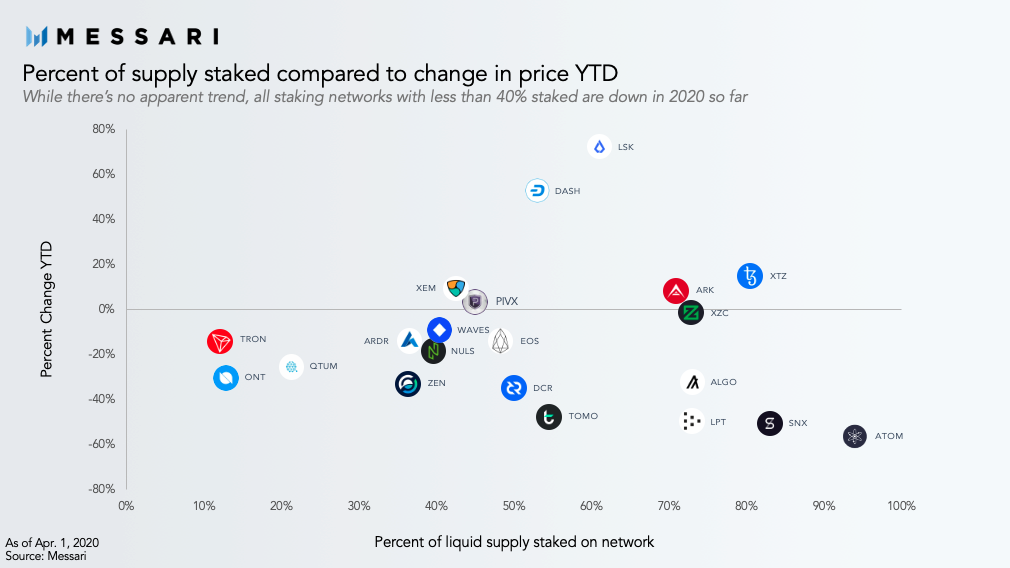 What is staking and why is it believed to impact crypto prices?

Staking is the process of holding crypto funds to support operations of a blockchain network. Staking is similar to earning dividends or interest on an investment as users receive staking rewards.

Unlike Bitcoin’s (BTC) original Proof-of-Work (PoW) consensus, which is based on miners’ work, the PoS algorithm operates depending on a validator's stake in the network. As the second-largest cryptocurrency, Ether (ETH) is expected to shift from PoW algorithm to PoS consensus in 2020 which has increased the amount of attention on staking recently. Binance, the world’s biggest cryptocurrency exchange, has been expanding its staking products since it launched its own dedicated staking platform in September 2019.