The Texas Department of Banking (DOB) has announced that it will not treat Bitcoin and other cryptocurrencies as money in a memo, whose pdf document version, interestingly enough, is no longer available here. 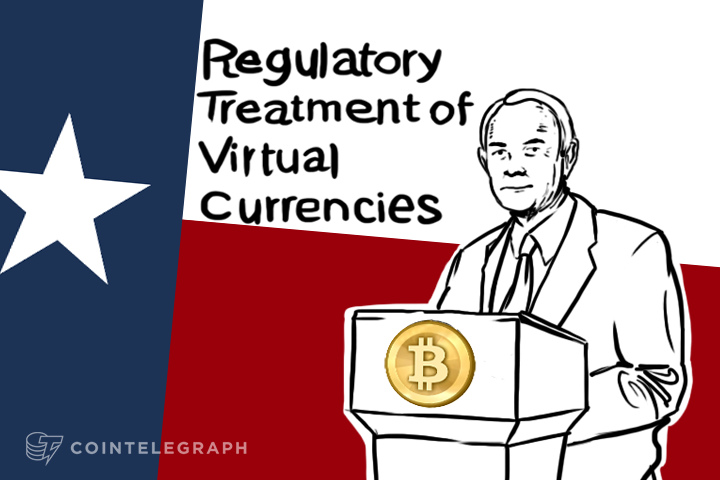 The Texas Department of Banking (DOB) has announced that it will not treat Bitcoin and other cryptocurrencies as money in a memo, whose pdf document version, interestingly enough, is no longer available.

Ahead of the curve
Lately, Texas has been in the headlines quite often alongside mentions of Bitcoin, from the launch of one of the first Bitcoin ATMs in the US to the State’s Attorney General accepting Bitcoin contributions for his gubernatorial campaign. Indeed, the Lone Star state has been at the forefront of embracing the peer-to-peer digital currency as of late.
This is why Daniel Wood, assistant general counsel at the Department of Banking, stated
“There’s a fair amount of business going on involving virtual currencies, and there’s a lot of confusion. There was some motivation to get out there quickly and help guide the national discussion. I would say this is the first memorandum to offer specific guidance on how Bitcoin and cryptocurrency fit into the current regulatory scheme from a state.”
Another Texas Rep., Steve Stockman (R), has been pushing for the IRS to reverse its stance on cryptocurrencies so they will be treated like money instead of property. He recently announced plans to file a bill that would change the current federal status of Bitcoin from a valuable asset to currency.
This proposal is, of course, motivated by tax purposes as he sees an opportunity that would help both businesses and the government as a result of clarity of regulation and increased tax revenue.
The memo
Texas Banking Commissioner, Charles Cooper, issued a memo earlier this month announcing the agency’s policies on virtual currencies like Bitcoin. These policies, however, reflect the same stance as that of the IRS:
“At this point a cryptocurrency like Bitcoin is best viewed like a speculative investment, not as money. Because neither centralized virtual currencies nor cryptocurrencies are coin and paper money issued by the government of a country, they cannot be considered currencies under the statute,” said Cooper.
Although Texas does not have income tax, its DOB still regulates some financial transactions and issues licenses to financial institutions. However, under the given federal and newly-announced state status, the exchange of Bitcoin for US dollars between two parties would not draw the agency’s interest, according to the memo.
Don’t mess with Bitcoin
Nevertheless, companies that deal in Bitcoin could attract state scrutiny even if they are not based in Texas. Indeed, some third-party exchanges have already attracted attention because of the way they handle transactions as an “escrow-like intermediary.” According to Cooper, this type of behavior could be interpreted as “money transmission.”
In turn, the state’s finance code could require even out-of-state exchanges to obtain licenses in order to serve Texas-based customers. Bitcoin businesses conducting these exchanges could then be forced to meet the minimum net worth of $US 500,000 under state regulations.
“Such exchanges do not need to be based in Texas to fall under the state’s regulations. If they do business with Texas consumers, we can force them to get a Texas license,” said Wood.
Wood also stated that his agency was not asked to issue any specific guidance on cryptocurrencies but added that at least one entrepreneur has shown interest in setting up some sort of Bitcoin exchange in the state.
Related News
Top Staking Projects of the Crypto World Today: Report
Mobile App Promises Easier, Better Crypto Options Trading Experience
Three Days of Hearings Before India’s Supreme Court on Crypto Ban
Thai SEC Grants License to Asia-Pacific Crypto Exchange
Raiz to Offer Bitcoin Fund to Australian Retail Investors in 2020
Australian Financial Regulator Could Oversee Facebook’s Calibra Wallet
<div is="sidebar" :sidebar-data="{"promoButtonsI18n":{"crypto-button":{"url":"crypto.btn.sidebar.url","label":"Get Crypto At True Cost\n","text":"Cryptoassets are complex instruments and investments carry a high risk of losing value. You should educate yourself in how crypto-markets work before making any investments. Always invest responsibly and be prepared for the risks associated with investing in or using cryptoassets. This promotion cannot be considered investment advice."},"etoro-button":{"url":"https:\/\/ad.doubleclick.net\/ddm\/clk\/437480595;240556498;x","label":"Try Etoro","text":"Trade on the world’s leading social trading platform (Highly volatile investment product. Your capital is at risk)"},"hitbtc-button":{"url":"https:\/\/hitbtc.com\/?ref_id=5cba0be404aa3","label":"BEST LIQUIDITY ON HITBTC","text":"Note that all trading strategies are to be used at your own risk. Before trading, we recommend to make sure that you have a clear understanding of cryptocurrencies and how they are traded."},"changelly-button":{"url":"https:\/\/changelly.com?utm_source=cointelegraph&utm_medium=referral&utm_campaign=changellyctengbutton&ref_id=le9ssi8dgmskmqu0","label":"BEST RATES ON CHANGELLY","text":"This is to note that you should realize all crypto trading risks. Please make sure that you understand how crypto exchange service works."},"nexo-button":{"url":"https:\/\/nexo.io\/?utm_source=cointelegraph&utm_medium=fixed&utm_term=content&utm_content=crypto_banking_account&utm_cam