Focusing on title tokens, a theory of smart laws, digital authorities and how to protect the system from digital dictatorship.

4465 Total views
47 Total shares
Listen to article
0:00
Opinion
Own this piece of history

Title token is a record of ownership similar to the one made in a traditional estate registry. This concept is designed as an alternative to security tokens and various financial crypto instruments. The title token is not “backed” with real property; this is the record that directly certifies the property right — the same as paper title deeds, or certificate of ownership, etc. It is a digital form of property record and the primary source of knowledge about property rights, which means no paper form is needed.

The title token can represent any legal rights: immovable property (land and buildings), movable (car, boats, aircraft, etc.), corporate rights (shares), and various property rights and derivatives (mortgage, debts and securities). Any legal right, and as you will see later, can be used to certify legal facts and events.

What about official registries?

You can create tokens that represent a flock of sheep because it does not require official registration. But you cannot just create a token of your land rights (car, boat, etc.). It will be a toy token with no connection with your legal rights because they “live” in the official state-owned registries. In most countries, registries, especially for land rights, are mandatory, and the regulations do not provide discretion in choosing one or another.

To enable blockchain technology to replace the traditional registries, the state machine requires reforms, which are unlikely to happen in the nearest future. What is more feasible is the recognition of alternative registries, so citizens themselves may choose. Those who are happy with traditional registries and bureaucracy can stay with these, but those who want to use the full power of blockchain, smart contracts and decentralized applications can transfer their records from the centralized database to any ledger.

Now, states monopolistically own and run public registries. Alternative registries can be enabled through new regulations, technical standards and government supervision to ensure compliance. But the authorities do not need to physically maintain such alternative ledgers and data centers for them to protect records. Blockchain technology ensures an unprecedented level of protection for records from corruption. Acts of public bodies performed on-chain will guarantee their accountability. Undoubtedly, it is better for the investment climate for any world’s region where it will be introduced.

Interestingly, blockchain technology fits into both types of property registries that exist in the world. The American system of the registration of conveyance creates a chain of title deeds. It fits into the blockchain technology, which is based on a familiar chain of transactions. The second type is the Torrens system, and registries in civil law countries, where the registry is designed to track down not deeds but titles fit into the concept of tokens. Tokens on a blockchain enable the title-centric type of public registry and, at the same time, completely mimic the system of a chain of deeds.

Are the authorities still needed?

Undoubtedly, yes. For example, there is a “smart will,” and after the owner’s death, it must bequeath the tokens to the rightful heir. How will the smart will know that the landlord is deceased? Or what if another heir has a claim? The belief of many crypto enthusiasts that with blockchain technology, we can get rid of third parties is not realistic, at least not at this level of science and technology.

A blockchain as a repository of evidence does not need a third party to maintain it, but we still need third parties to certify various facts of our life. It is not just about birth and death. A person from Argentina will not buy a bungalow remotely on Bali because the bungalow token that represents the title is just a declaration of the owner. To make the transaction happen remotely, they need a third party whom the buyer and the seller can trust, which will confirm that this token represents this property right. Normally, this job is done by public bodies and registry.

Cross Reference is a basic protocol to maintain the validity of records. A typical scenario is that the end-user creates a token, which can represent a digital identity, property rights, a physical object, a fact or event, and includes the reference (link) to the token, which provides the information of its validity. Changes in both records reflect legal changes in the object. The token owner can make a transfer of the token to change ownership, while the validator can change its validity (legal status).

Use case. Alice creates a token (a key-value record that carries some user’s data) for her title, and Bob, who is a town clerk, creates his token that says “Alice’s Title is valid.” If Alice loses her private key, she will ask Bob to update his token, mark it “invalid,” and reissue a new token certificate. 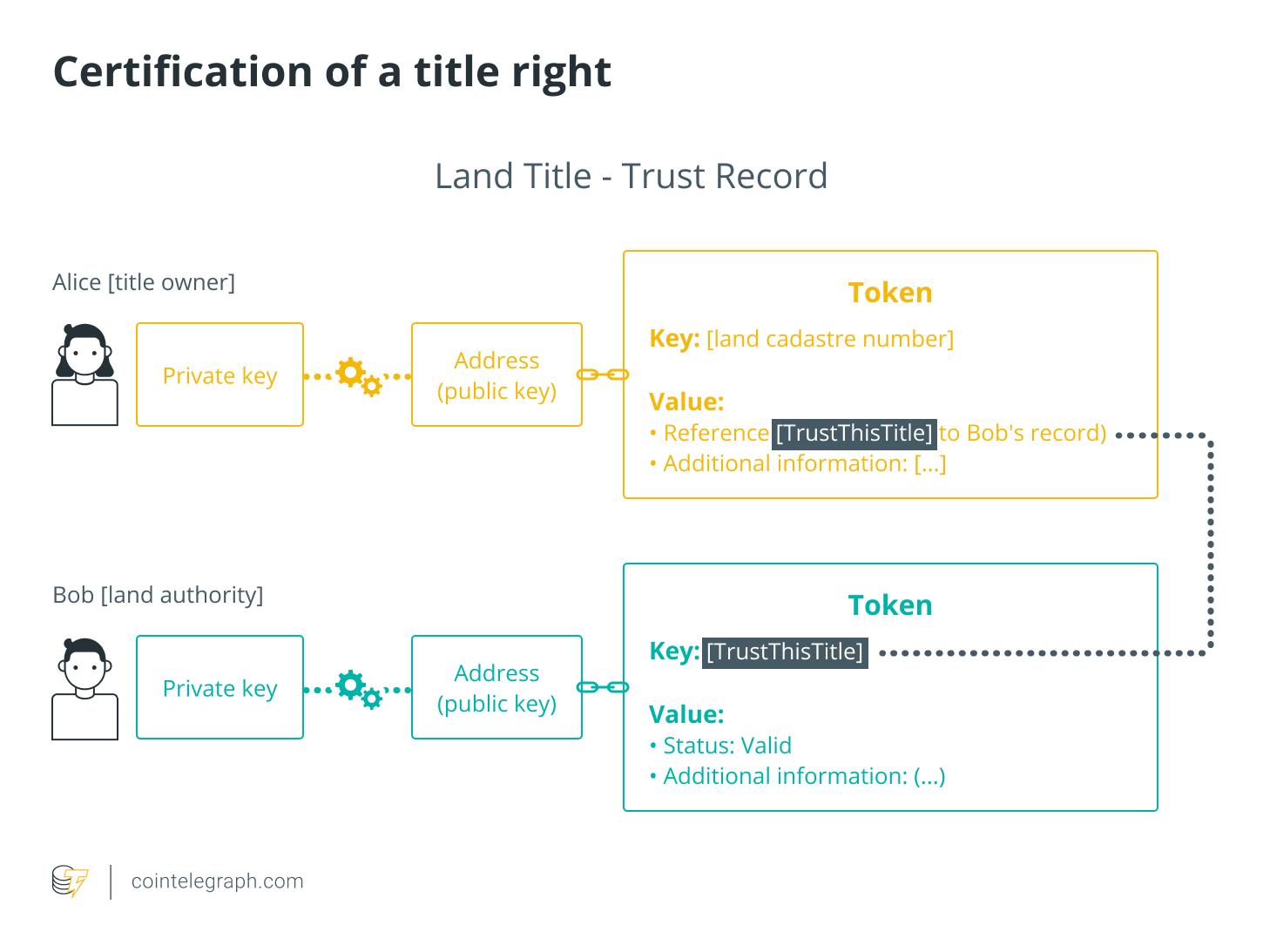 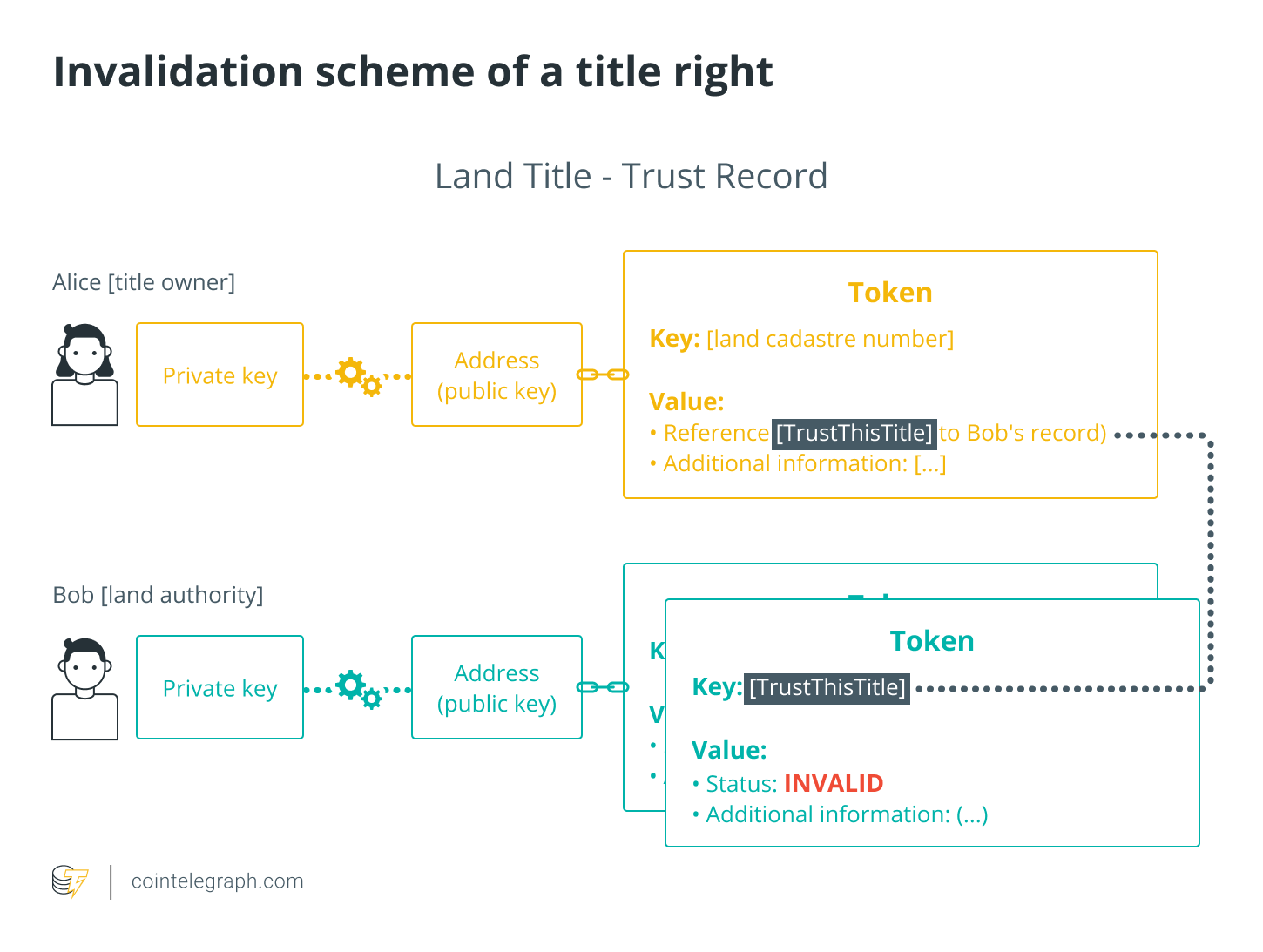 In a more general scheme, cross-referencing is a method of providing status records by trusted third parties that have knowledge about legal facts and events. The blockchain doesn’t make them valid, but the authority that certifies the fact. Blockchain technology just has a better infrastructure for this system to make sure these records are uncorrupted. 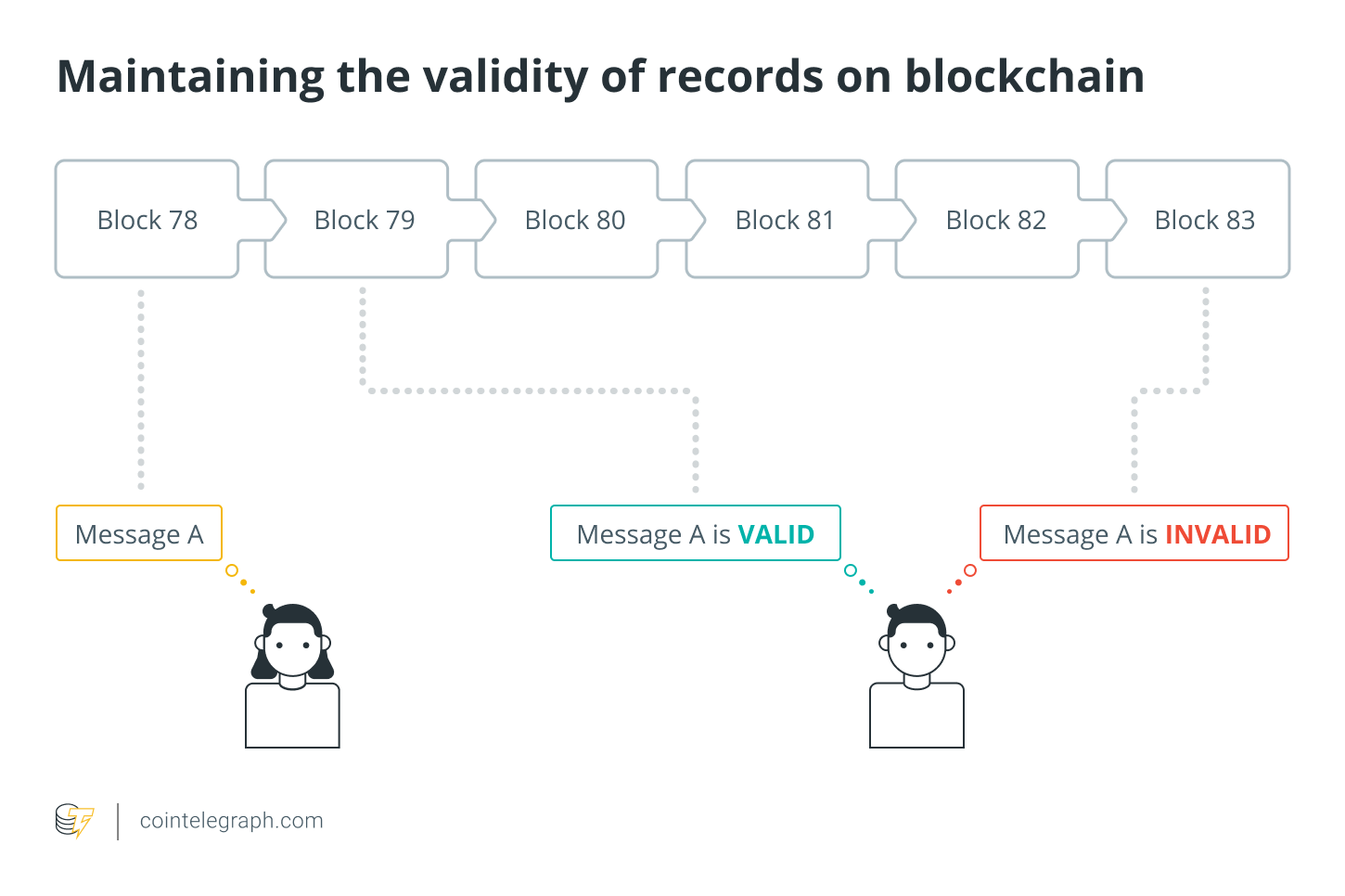 Alice creates a record (token) on a blockchain. Bob says it is valid. If Alice loses her private key, Bob will publish the record that says it is not valid anymore.

If you have heard from some crypto skeptics that the problem of blockchain technology is that it does not tolerate mistakes because no one can alter or delete data, as you can see, the ledger immutability is not a problem; it is just a matter of better application design.

The idea of creating permissioned ledgers to fix mistakes leads us back to centralized registries where censorship and altering records are legitimate tools and all are built around the trust to those who maintain the ledger. Due to no censorship, any junk data is possible on public blockchains. So, the validity here is provided by the traditional trusted parties through cross-referencing. Though their acts are not hidden as in any state-owned database, they are transparent and, hence, accountable. With cross-reference, it is possible to address not only the loss of private keys but legal disputes and various procedures for obtaining permits from the government agencies.

Use case: Building permit. Alice wants to build a house on her land. She applies for permits to: (1) a town clerk; (2) the architecture department; (3) the department for environment and heritage, and so on. Each of these authorities creates its own tokens (certificates) on ledgers to certify permits. Alice adds references to each of these certificates in her token record. To check whether Alice built the house lawfully, the inquirer searches Alice’s token and verifies references whether they are valid and issued by authorized agencies. 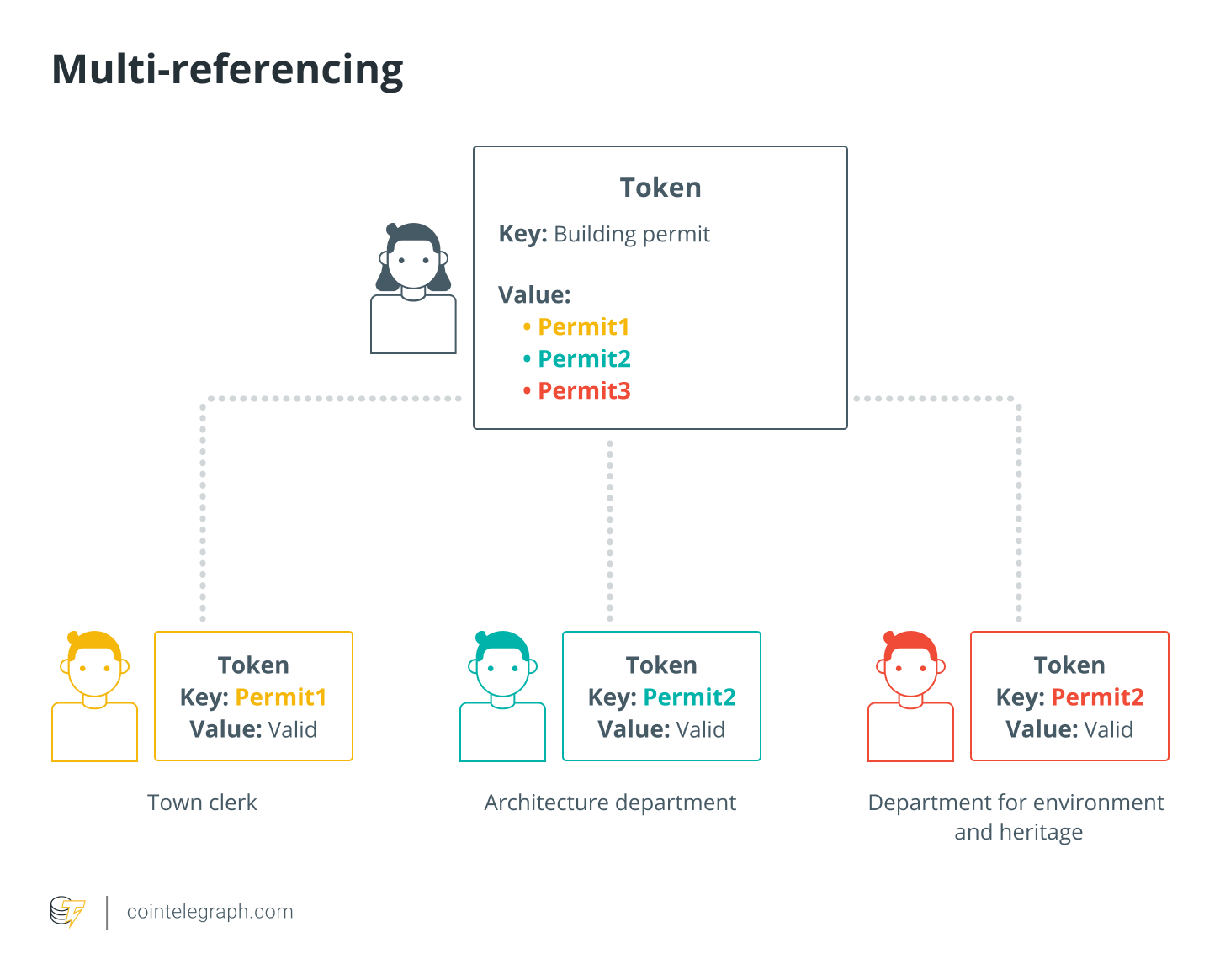 But what if Bob, a town clerk, corrupted the system? For example, Alice was unlawfully deprived of her rights to land. There is a system of root records. Firstly, the public body may be hierarchical, and therefore, the higher authorities may deem the clerk’s record as unlawful. Here comes the real power of blockchain technology. The entire time, Alice still owns her token even if Bob issues a transaction that it is invalid. After her claim, Alice has been restored in her rights. She will update her token to include a new reference to Dave’s (a new town clerk) record, who says she has the right.

To eliminate dead-end situations when neither party has access to their records, there is a root record, which can issue patches to the system. Patches are also published on-chain, though they must belong to the root address, which is initially set up in the public registry. We need patches to filter out those records that aren’t relevant or illegal. Technically, we don’t delete them because it is impossible on a blockchain. But because we have an overlaid system scanning records on a blockchain and detecting valid ones from it (as we remember blockchain can carry on a lot of junk data), the patch is the record, which is also published on a blockchain but comes from a trusted address. This patch “tells” your system which record or address must be filtered out.

The root can belong to a court. There might be multiple roots based on branches of power (legislative, executive, judicial), and of course, the root can be controlled collectively through a multi-signature scheme — to make sure that those who have a mandate of power make lawful decisions. Eventually, we will likely see the system of a direct e-voting (e-referendum) where not only the representatives of a collective body (council, parliament, committee) make transactions but all the citizens of a town, a state or a whole country.

The most fundamental thing here is that a digital dictatorship has no chance. Even if abuse of power occurs, acts of public bodies must be recorded on-chain. Otherwise, they will not influence any records on the blockchain, including patches. Each node is independent and can be run by any user because it is a blockchain. And each node adds the list of trusted roots, but we always have the right not to trust them, and this discussion is not about blockchain technology as you see it.

Technically, the system can be completely reset. You specify new roots, from which new authorities publish new patches. Your node scans the ledger from the very beginning, and the system applies new filters and rules provided by the patches. As a result, you get a new representation of the current state of the public property registry.

Governance is not a matter of mathematical consensus. The interpretation of records is a layer above blockchains that represents the social consensus. How we decided which root addresses we trust, how and when we reset roots, is a matter of the political system. The only thing that is unchanged is the blockchain. As a public repository it keeps all kinds of records as evidence of everything that happens in the real world.

This is part two of a three-part series on the theory of title token — read part one on the blockchain estate registry here, and part three on the new generation of public property registries here.

Oleksii Konashevych is the author of the Cross-Blockchain Protocol for Government Databases: The Technology for Public Registries and Smart Laws. Oleksii is a Ph.D. fellow in the Joint International Doctoral Degree in Law, Science and Technology program funded by the EU government. Oleksii has been collaborating with the RMIT University Blockchain Innovation Hub, researching the use of blockchain technology for e-governance and e-democracy. He also works on the tokenization of real estate titles, digital IDs, public registries and e-voting. Oleksii co-authored a law on e-petitions in Ukraine, collaborating with the country’s presidential administration and serving as the manager of the nongovernmental e-Democracy Group from 2014 to 2016. In 2019, Oleksii participated in drafting a bill on Anti-Money Laundering and taxation issues for crypto assets in Ukraine.