The U.N. and other experts have warned against attending North Korea’s upcoming crypto conference, questioning the motives behind the event.

On Jan. 15, the United Nations warned that attending North Korea’s cryptocurrency conference in February will likely constitute a sanctions violation. According to Reuters, this notice was issued in a confidential report that will be submitted to the U.N. Security Council later this month.

The warning comes after a series of events sparked suspicion around North Korea’s growing interest in blockchain and cryptocurrency. In August, a panel monitoring the enforcement of U.N. sanctions reported that North Korean agents have generated about $2 billion by stealing money from financial institutions and cryptocurrency exchanges. The leaked report notes that North Korea is planning to use the money for its weapons of mass destruction programs, creating a significant cause for concern.

North Korea has been under U.N. sanctions since its first nuclear test in 2006. The country faces sanctions on trade bans of weapons-related materials and goods alongside those covering financial assets (i.e., cryptocurrency) and banking transactions.

In addition to stolen funds, the U.N.’s warning follows the indictment of Ethereum Foundation researcher Virgil Griffith, who traveled to North Korea in April last year to attend the country’s first blockchain conference.

According to the indictment, Griffith provided services to the Democratic People's Republic of Korea without obtaining approval from the United States Treasury's Office of Foreign Asset Control. Griffith has been charged with one count of conspiracy to violate U.S. sanctions law and faces up to 20 years in prison.

North Korea planning its next blockchain conference in February

Despite all this, some members of the blockchain community are still planning to host an event in North Korea next month. According to the event’s website, the conference will take place on Feb. 10 and is being organized by Alejandro Cao de Benos, a special delegate for the Committee for Cultural Relations and president of the Korean Friendship Association, along with Chris Emms, a business developer at Bitcoin.com.

Both Emms and Cao de Benos did not respond to Cointelegraph’s request for comment regarding the reasons for hosting a blockchain conference in North Korea.

Brittany Kaiser — an activist, Cambridge Analytica whistleblower and subject of the Netflix documentary “The Great Hack” — explained that she was invited last August to attend an event in North Korea scheduled for September (which was eventually cancelled for unknown reasons) via a Telegram group organized by Emms.

Kaiser told Cointelegraph that she thinks Emms was also behind North Korea’s blockchain conference last April, for which Griffith was arrested. She defended members of the blockchain community who were invited to the event last April, saying they could have been unaware of the dangers associated with visiting North Korea. Kaiser elaborated:

“Most people in the blockchain industry are idealists and technologists, not political scientists or experts in foreign affairs.”

Based on the Telegram messages, about 90 blockchain community members were part of the group chat, including Moe Levin, who is an organizer of the North American Bitcoin Conference, Ran Neu-Ner, who is the CEO of Onchain capital, and many others.

The messages clearly detail the cost of the event, which was 3,200 euro (around $3,550) per person, along with an event agenda that included sightseeing, conferences and various business meetings. 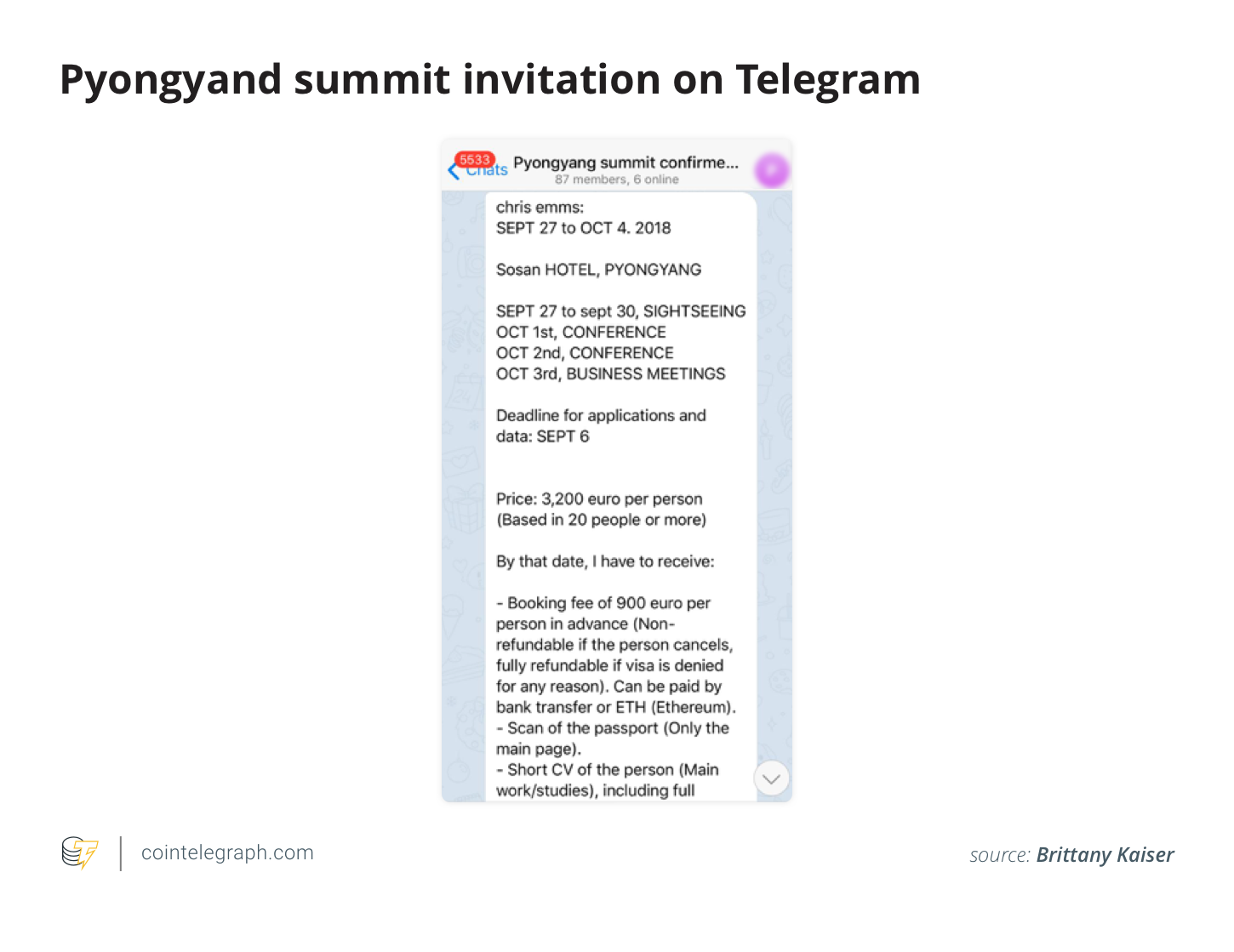 According to Kaiser, Emms invited her to attend the event, but he said that she couldn’t speak because she was a U.S. citizen. 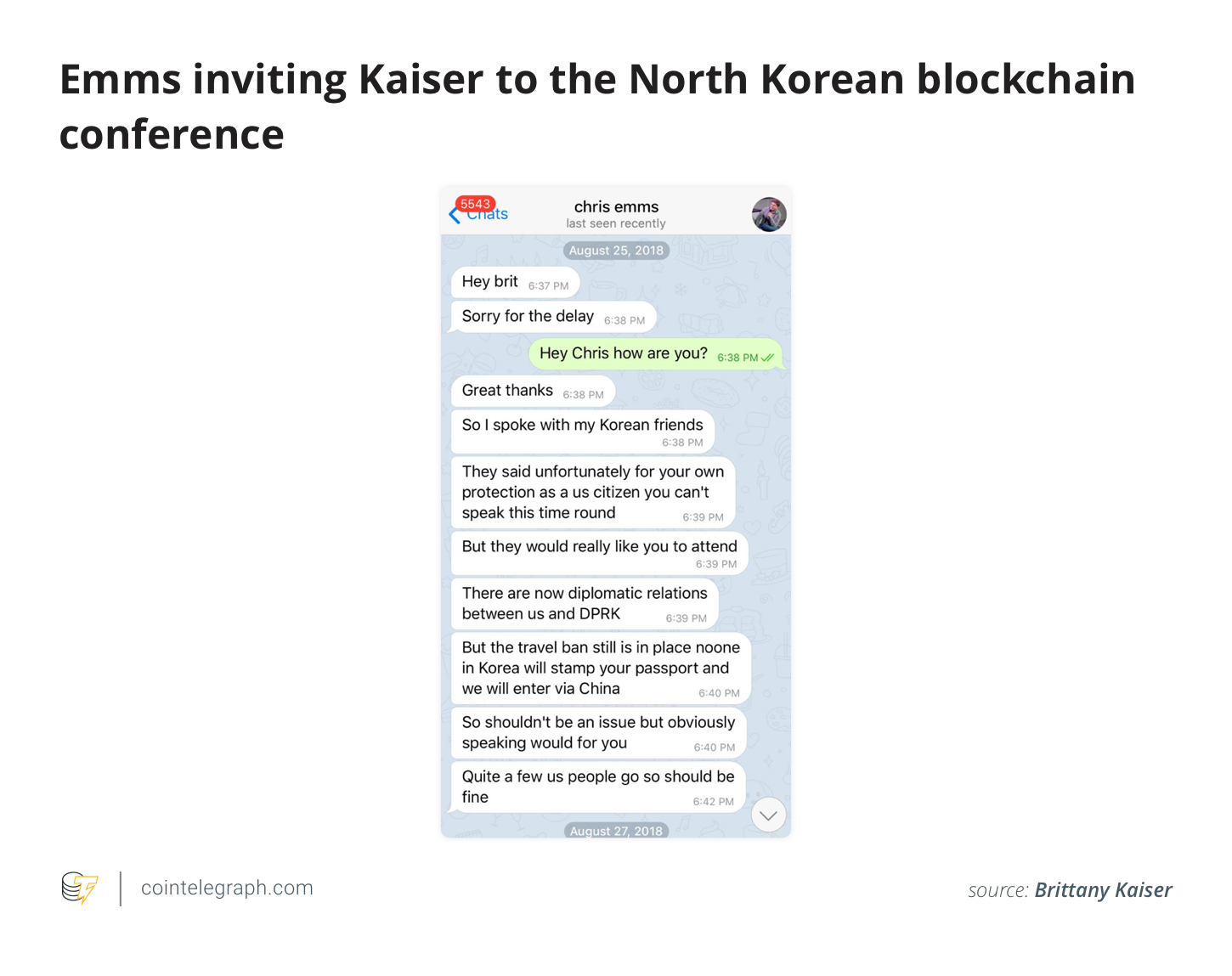 Is North Korea a bad actor for blockchain?

Kaiser explained that even though the event organized by Emms last August was eventually cancelled for unknown reasons, she still wants to know who asked Emms and others to organize the event in the first place. Kaiser said:

“Which DPRK government officials wanted to bring them there? It’s incredibly suspect and even worse when you are taking people’s safety into your hands. A researcher for the Ethereum Foundation is now in jail.”

Kaiser, who holds a master’s of law in human rights with a focus on North Korea, believes that North Korea’s interest in blockchain demonstrates bad actors using technology to wield power over others, “North Korea poses one of the biggest threats to human rights and a violation of most international agreements to uphold basic standards.”

Kaiser went on to add that the country is undermining the notions of the social contract, laws and international agreements by making use of legal gray areas and a lack of regulation of blockchain and crypto technology, concluding:

“We need to be more careful about endorsing emerging tech as naturally positive. The tools are benign but some of the people that get ahold of them have malignant intentions.”